As a boy, Norman Swirsky was raised in relative poverty (dad was a musician) in a Jewish fam­ily living in Glasgow. When he was 10 years old, his dad ch­anged the family's surname to Swan in a response to ongoing anti-Semitism in Scot­land after WW2. Young Norman Swan wanted to be an actor grow­ing up, but his parents encouraged him to study medicine. He grad­uated in medicine from the Uni­versity of Aberdeen and later ob­tained his postgraduate qualifications in Paediatrics. After that, he spent time working in London before moving to Australia. 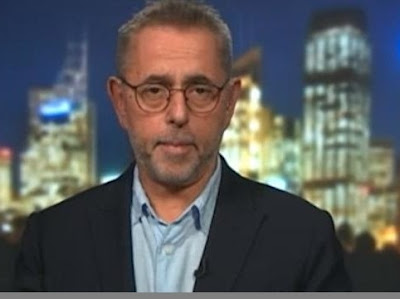 Dr Norman Swan in Sydney
While on a break from medicine in 1982 he joined the ABC and began a stellar career as one of the first medically qualified journalists in Aust­ral­ia. His career was highlighted by his desire to keep the Aust­ral­ian public inform­ed of health developments as they happen, combining medical expertise with journalism.

Since then Dr Swan has won numerous awards for his work as presenter of the Health Report on ABC Radio National and created the Health Minutes on NewsRadio. Note that the Health Report has been the world’s longest running health programme in the English-speaking world. He also edited his own news­let­ter, The Choice Health Reader, published with the Aust­ral­ian Consumers Association. Most of all, he earned my respect as an articulate, community-minded doctor.

Swan was a multi-award winning producer, broadcaster & in­vest­igative journalist. He was Australian Radio Producer of the Year in 1984 and was awarded a Gold Citation in the United National Media Peace Prizes for his radio work. He has won 3 Walkley National Awards for Australian journalism including the Gold, and twice won Aus­tralia's top prize for Science Journalism, the Michael Daly Award.

A famous example of Dr Swan's work was his much publicised and contro­versial investigative programme on scientific fraud and the well-known gynaecologist Dr William McBride. In 1987, based on evidence from a Found­ation 41 biologist in an analysis for ABC’s Science Show, Dr Swan bravely stated that Dr McBride had failed to scientifically record the amount of drug the experimental animals received. Swan won a Walk­ley award for his re­s­earch, while McBride’s career moved in the other direction. In 2004 he was awarded the Medal of the Australian Academy of Science, a rare hon­our, and the Royal College of Physicians of Glasgow made him a Fellow.
Norman Swan's core missions were indeed brave. Firstly he wanted to give people the information and insights they needed to make the best decisions about their health, usually information that only doctors had. And secondly, as a health journalist and in the tradition of the Fourth Estate, his role was to hold those who provide and fund health­care to account.

On television, Dr Swan has hosted ABC television's science program, Quantum, and has been a guest reporter on Catalyst and Four Corners. He hosted Health Dimensions on ABC Television, and created, wrote and nar­rated a four part series on disease and civilisation, Invisible Enem­ies, made for Channel 4(UK) and SBS Television. This was shown in 27 countries! He also co-wrote and narrated The Opposite Sex, a four part series for ABC Television. 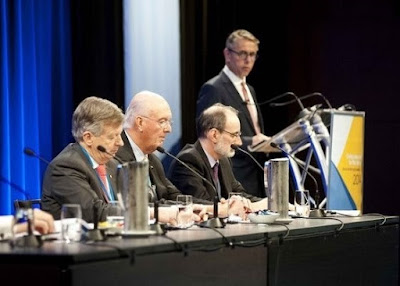 Dr Swan addressing a conference
NSW Health Symposium, 2014
Outside Australia, Dr Swan has been the Aus­tralian cor­respondent for the Journal of the American Medical Assoc­iat­ion, the Brit­ish Medical Journal and has consulted for the World Health Organ­isation in Geneva. [NB he was brutally criticised by American conservatives. Rush Limbaugh emphasised that Covid-19 was being "weap­onised" by Swan in the Australian media to bring down Donald Trump].
The advent of Covid-19 has changed everyone’s lives and it also thrust Norman Swan into the key role in his career: he became Australia's most well-known doctor and a trusted voice in the long pandemic. He co-created a hit with his daily 10-minute podcast with health reporter Tegan Taylor called Corona­cast. They provided the latest evidence on the pandemic by responding to questions from the audience, and last year it won a Walk­ley Award. In 2021 he published a book about general health to guide people beyond the pandemic: So You Think You Know What's Good For You?.

Dr Swan has been involved a range of topics on health based on his many years in medical research. But his greatest ability was as a very skil­l­ed facilitator who tackled the most specialised of conferences, chall­eng­ing ideas to raise the level of debate. Now download the podcast The life of Dr Norman Swan
by Dr Joe

It seems Dr.Norman Swirski-Swan is a great doctor and medical journalist; he has it all (education, experience, awards), and knows it all (health, journalism). Quite an inspirational figure! Kudos to him!
The title of his recently published book sounds a bit conceited to me: "So You Think You Know What Is Good For You?" Well, everyone should know what is good for him, without necessarily depending on doctors and health publications. (Nowadays, we can get help on the internet).

Sorry but I do not like the sound of Dr Swan. He thinks he knows it all and likes to tell people what to do. The world is full of these types especially now with Covid 19. Power goes to their heads. The reaction to Covid 19 has changed everybody's lives, not Covid 19.

When Norman Swan moved to Australia in the 1980s, he could not have known about coronavirus, but I wonder what he knew about Senators Christensen, Hanson, ex Senator Clive Palmer and other heavyweights who try to intervene in health care.

Thank you Dr Joe. He is wonderful man and communicator, and not afraid to question the experts in their fields about whether their treatments are effective for patients. I didn't realise until reading this that he has received so many honours, nor did I know he was known in the US. I am not sure if The Health Report is still broadcast by CBC in Canada as it used to be.

So You Think You Know What Is Good For You? is an excellent book that people will find very useful when seeking the information and sources that they need. However the name of the book probably seems a bit provocative, probably to raise sales.

Public health questions are typically open to attack and conspiracy, and Dr Swan was in the perfect position to keep the Aust­ral­ian public properly inform­ed of new health developments, combining medical expertise with journalism. The medical profession is very fortunate.

Probably there are public figures (in Parliament, on tv...) who will always oppose community health care issues in every country. So although Dr Swan wouldn't have known about Senators Christensen, Hanson and Clive Palmer, he would have known what to expect. Fortunately far more people listen to Dr Swan's broadcasts than listen to Senators' speeches.

The Health Report certainly still broadcasts by CBC in Canada, but it seems to be at a time suitable for Eastern Australian Time. Since my Canadian colleagues admire Dr Swan's work, I often recommend they listen to his podcasts and read his journal articles.

for educated people, to still deny science and medicine is extraordinary. Yet we are not that far advanced..in the 1950s people rather saw the children die of polio than allow them to be vaccinated.

I enjoy the Health Report, and have a lot of time for Dr Swan. There are those who sneer at him because, “ he’s just some GP, what would he know?” Clearly those are the ones who haven’t heard of all his honours - or don’t care, because of their politics.

His son Jonathan Swan is also a journalist.

it is always politics posing as medicine, isn't it? I don't mind at all if:
1. adults choose not to obey public health orders.
2. don't want to allow the tax payer to pay for universal health care or
3. believe vaccinations are the government's attempts to control the individual citizen's brain matter.
But I do mind them risking other peoples' health and I do mind them using up public hospital beds when they become sick themselves. Even if Dr Swan later finds that an error has been made, then he will certainly keep up with the newest quality research.

I actually took it upon myself to formally nominate him for Australian of the year. I think his rational reporting on the vagaries of health over many years has been a huge benefit to the community . I work as a health professional and listen to his Health report every Monday on my drive home from work. It has been an excellent adjunct to my reading and is also accessible to people who are interested. Norman has a certain manner which some people don't like but compared to the pugnacious attitude of some in the media and on the right of parliament he is a rational pussycat . His book "so you think you know what's good for you ?"is excellent and provocative which everything needs to be these days to cut through all the "wellness influencers" who are out there spreading opinion dressed up as facts . I think Norman is one of the reasons Australia has had a reasonable response by the public to this crisis compared to the US . People may be annoyed by his message but in the end they trust his information as he is willing to change his mind and take into account the latest information. Science will win the long game but will be seriously challenged by emotive propaganda from usually from the right . He is able to promote the rational processing of information which is what is needed most in the world right now.

I agree with every word you said, except I would modify one sentence: " I think Norman is one of the reasons Australia has had a reasonable response by the public to this crisis compared to the US". The reason US, Brasil, Belarus, Mexico and some other countries faced the pandemic badly was when their leaders started banning masks in public, not ensuring all adults were vaccinated and sacking scientific experts. Australians have had a largely positive response because our notion of Individual Freedom does not include endangering the rest of the community.