The Gershwins - when American music found a voice of its own 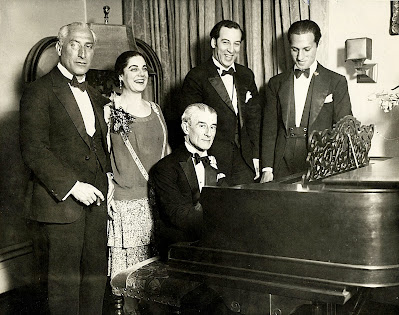 From left: Oscar Fried, conductor; Eva Gauthier, singer; Maurice Ravel at piano; Manoah Leide-Tedesco, composer-conductor; George Gershwin
New York, 1928. Wiki
Israel Ira Gershowitz (1896-1983) and brother Jacob George (1898-1937) were born in New York. Their parents, Moishe and Rose from Odessa, at first changed their surname to Gershvin, then Gershwin. The parents had bought a piano for lessons for Ira, but it was George who spent more time playing it. Younger sister Frances was the first sibling to make a living through her musical tal­ents and youngest brother Arthur also became a composer of songs, musicals and piano works.

George learned Debussy, Liszt and Chopin for four years of formal ed­uc­ation; the rest of his education was picked up in the concert halls of Russian composers, at Broadway revues, in the Yiddish theatres and in Harlem clubs. Note the emotion­al clarinet solo that opened Rhapsody in Blue and in the Hebraic tinge of Ger­shwin melodies eg The Man I Love and Summertime.

The young lads frequented the Yiddish theatres in New York’s Lower East Side. In 1915, a Yiddish Theatre star in­vited George Gershwin and composer Sholem Secunda to cooperate on a Yid­dish op­er­et­ta but it didn’t happen. Later, when he was already a successful popular song writer, George signed a con­tr­act with the Metropolitan Opera to write an opera based on Ansky's Dybbuk. And he planned studying Jewish music professionally in Europe.

By 1916 George began composing and demonstrating songs in Tin Pan Alley in Manhatten. By 1921 Ira also became involved in the music business, being signed up to write the music for his next show, Two Little Girls in Blue, produced by Abraham Erlanger. Luckily Ira’s lyrics were well received. 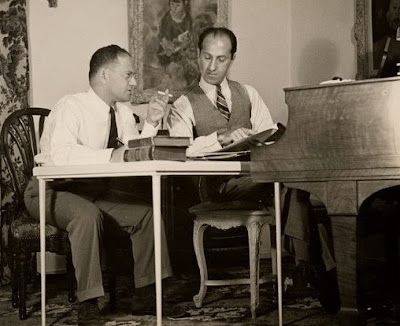 The brothers loved the jazz clubs in Harlem, listening to the pianists and feeling the freedom of expression that jazz music allowed. They’d also heard the freedom that a cantor in synagogue had, and created their new, integrated American sound. In c1921 George and Ira had written a tune they frequently sang and played at parties. Called Mischa, Yascha, Toscha, Sascha, it celebrated that names of 4 famous Russian Jewish violinists: Mischa Elman, Jascha Heifetz, Tos­cha Seidel and Sascha Jacobsen.

The parents’ musical and cultural inf­l­uence on the brothers remain­ed strong. So if jazz rhythm drove George's music, the composer's Jewish Russian influenced the melodic contours and orchestral colours of his work. In effect, Gershwin bridged jazz of the New World and Yiddish melody of the Old World in a music that epitomised its era. George's music and Ira's lyrics seemed to crystallise the Roaring '20s and '30s era when American music found a voice of its own, via the jazz, theatrical and symphonic worlds.

It was not until 1924 that Ira and George Gershwin got together to write the music for their first Broadway hit Lady, Be Good! Soon their combined talents became one of the most influential for­ces in the history of American Musical Theatre critics; it was then that the American musical found its native idiom. They worked with play­wrights George Kaufman and Morrie Ryskind, and help­ed raise popular musical theatre to a new level.

The play Primrose (1924), took Gershwin to Britain. He sailed the Atlantic along with 7 finished tunes, written in the style of classic Edwardian romps. George not only wrote the music, he also orchestrated three tunes himself. Primrose saw 255 perf­orm­ances in London’s West End and more in Melb­ourne and Sydney. But the great American comp­oser's show never appeared in the USA. Ditto some of George’s other early Broadway shows; many parts of Half Past Eight (1918), Dangerous Maid (1921), Our Nell (1922) and The Rainbow (1923) dis­app­eared.

These newly honed orchestration skills helped George write pieces that eventually cemented his place of fame. In the 1920s he moved to Paris to study with composer Nadia Boul­anger, and it was there he wrote his ode to the city An Am­er­ican in Paris 1924.

After returning to New York, the brothers co-wrote the music for many shows and films, including The Man I Love, Fascinating Rhythm (1924), Someone to Watch Over Me (1926), I Got Rhythm (1930) and They Can’t Take That Away from Me (1931). The brothers collab­orated on the score for the Broadway show, Of Thee I Sing (1931).

George & Ira wrote Porgy and Bess with DuBose Heyward, incl the aria Summertime (1934). Init­ial­ly a commercial fail­ure when it was first performed in Bos­ton in Sept 1935, Porgy and Bess became one of the most important inter-war American operas. George could­n’t expect the Metropolitan Opera to stage Porgy and Bess, given how difficult it was to assemble a new cast of black singers. So the opera opened on Broadway instead. 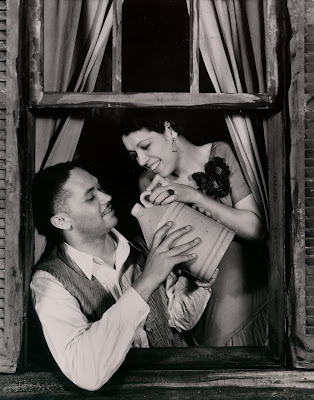 George’s work cleverly mixed elements of jazz and African‐American spirit­ual music from the south. He actually created a truly Amer­ic­an sound! George wrote continuously, and even when he moved to Holly­wood in 1936, he composed film scores. George kept working all his very short life, but died from a brain tumour in 1937 at 38.

Following George’s death, Ira stopped writing for 3 years. He may have been depressed, but he eventually teamed up with accomp­lished composers like Jerome Kern (Cov­er Girl) and Kurt Weill (Lady in the Dark). And he con­tinued to write the lyrics for film scores and Broadway shows.

Ira’s book, Lyrics on Several Occasions 1959, was a collection of his lyrics, accomp­anied by his annot­at­ions. Plus Ira recorded the det­ails of his broth­er’s legacy, consigned to the Library of Congress. Ira died in 1983.

Modern Times
In 1982 crates holding handwritten scores, linked to George Gershwin etc, were discov­er­ed in a New Jersey warehouse. Many of the manu­scripts contained lost or unpublished songs that had not been performed in decades, including c70 Gershwin tunes. And there was a gala concert held at Carnegie Hall to celebrate the Ira’s centennial in Dec 1996.

You may like to read Edward Jablonski’s book Gershwin: A Biography, 1988

Russian composers, Yiddish theatres and Broadway reviews make perfect sense. Now I wonder how brave they were to go into Harlem clubs. Thank goodness they did 😇

I thought exactly that the first time I saw Al Jolson, in blackface, sing Swanee. It was George Gershwin's first hit recording, at the end of WW1, and clearly much influenced by jazz etc. Brave maybe, but definitely a great decision.

The first time I heard Rhapsody in Blue I wanted to learn the piano. I never did learn but I still love the music. I hadn't given Gershwin's influences a thought until reading your post. It makes so much sense now.

Hello Hels, I guess that exploring New Jersey warehouses was the thing to be doing in the 1980's. Your story reminded me how thousands of Arthur Pryor's personal scores were found in 1985 in an abandoned warehouse in Asbury Park, New Jersey. You will remember Pryor from my "mouthpieces" post. He was the world's greatest trombonist at the turn of the 20th century (of course with Sousa's Band), and afterwards was a composer and bandleader second only to Sousa himself, so his scores were a phenomenal find.
--Jim

I am going to unashamedly plagiarise this post for my Facebook group, You Don't Have to be Jewish, London. It's just the kind of fact-filled item that will be enjoyed (I will credit this post though).
The disproportionate number of successful Jewish composers is a constant source of wonder; I don't think it's enough to simply say that they were born talented. There must be some other less obvious reason.
CLICK HERE for Bazza’s queasily quintessential Blog ‘To Discover Ice’

Bazza--At home I have a book called Famous Musicians of a Wandering Race, which appeared in 1927. Even at that early date there is a tremendous listing of famous names. Of course, today you can fool around with Wikipedia categories to get even more. --Jim

I enjoyed reading about the Gershwin family's musical talents until I came upon the mention of the very early death (at 38) of George Gershwin. What a tragedy!

I love it when some cultural element from our childhood had such an impact that it suddenly floods back into the mind decades later. I had the same feeling from seeing Anne of Green Gables quoted this week. I thought it was 1962 again :)

It is a magic moment indeed when original letters, scores and notes come to light for the first time in decades. Or for the first time ever! But do historians then have to rethink their long accepted theories and perhaps rewrite some of their books and journal articles?

Composers, lyricists, pianists, violinists, conductors, opera singers .. the list of talented Russian Jewish artists in New York blows my mind. Their parents had to cobble together a living in tough circumstances, but the children had every other support from their parents.

When my mother and her first cousins were young, their Russian/Yiddish speaking parents said they could go into absolutely ANY career they wanted, but it had to be literature, music or medicine. As a result, all of them succeeded in literature, composing, conducting or medicine :)

Thank you. I love the idea of the book Famous Musicians of a Wandering Race, covering George Gershwin and hundreds of other wonderful musicians. Even better, the 1927 publication date means Saleski had a fair, contemporary examination of the music scene, not one distorted by decades of glamour (or otherwise).

I always thought there was something wrong with the world when talented, creative and famous people died in their late 20s and their 30s. The usual explanation was that all that public pressure caused alcohol or drug abuse, high blood pressure, VD etc.

But George Gershwin's medical issue was different. He had seizures, dizziness and periods of unconsciousness, but his symptoms were misdiagnosed as psychosomatic, caused by the stresses of overwork. The brain cancer killed a very young man, not even at his brilliant peak yet.

Thanks Hels - an interesting history, from which I learnt a great deal. Wish I was musical - I had an aunt who loved playing Gershwin collaborations. Cheers Hilary

me too. I preferred cultural history at uni and after, much more than military, Church or political history. But I know sod all about musicology, so I carefully cited all references to more knowledgeable historians in the post.

it is excellent that your Facebook group, "You Don't Have to be Jewish, London" will really get stuck into this theme. Make sure you examine all my sources.

It will be heavy edited down for those with a short attention-span!😄

I voluntarily retired from working at the TAFE college at the end of the 2019 academic year. It was a tough decision, but thankfully I still had my Short Courses at the Jewish Museum of Australia. Until the Short Courses were closed down in Feb 2020 from Covid :(

My Museum students were largely retired or semi retired people, and they also loved cultural history courses eg Bauhaus, Bezalel, Moulin Rouge. I am envious of you :)

Thanks for this very interesting post! I hadn’t known Ira Gershwin was still alive during my lifetime! Those two produced so many wonderful tunes! And Rhapsody In Blue is a wonderful piano concerto! Sad that George died so young.! Imagine how much else he could have written if he had lived as long as Ira!

Britannica said that George and Ira’s Broadway shows from the 1920s and ’30s featured music we still know near 100 years later: Fascinating Rhythm, Oh, Lady Be Good, Sweet and Low-Down, Do, Do, Do, Someone to Watch over Me, Strike Up the Band, The Man I Love, ’S Wonderful, I’ve Got a Crush on You, Bidin’ My Time, Embraceable You, But Not for Me, Of Thee I Sing, and Isn’t It a Pity.

For films add: Let’s Call the Whole Thing Off, They All Laughed, They Can’t Take That Away from Me, A Foggy Day, Nice Work if You Can Get It, Love Walked In, and Love Is Here to Stay.

And others I didn't know!