Stella Tennant was born (1970-2020) in London, the youngest of 3 children to the Hon Tobias Tennant, son of 2nd Baron Glenconner, and Lady Emma Cavendish. Tennant rose to fame in the 1990s while mod­el­ling for Versace, Al­exander McQueen and other designers. Although she was the grand-daughter of a Duke, Tennant didn’t become one of the leading Brit­ish models until her 20s. 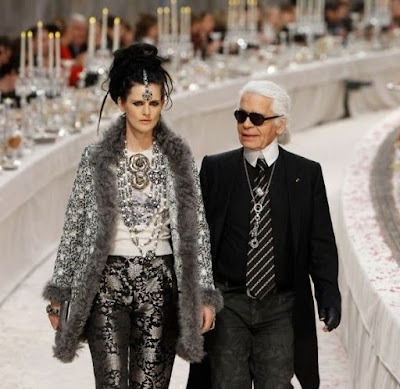 Karl Lagerfeld signed Stella Tennant to an exclusive contract
to make her the face of the Chanel fashion house, 1990s.
Clear, androgynous looks must have been highly desirable back then because Stella was in hot demand. Lagerfeld announced her as the new face of Chanel with an exc­lus­ive modelling contract, and she became a muse to the designer. And from then, she defined 1990s fashion. It was a busy decade; in 1999 Stella married French photo­grapher David Lasnet and soon had 4 children. She was also in ad­vertising campaigns for Calvin Klein, Chanel, Hermes and Burberry.
In 2016 Stella co-designed a collection with Lady Isabel Cawdor for the Chanel-owned, London-based brand Holland & Holland. She also ran Tennant & Son, a line of hand-knitted cashmeres and a luxury home wares company with her sister. For her last decade, she devoted her time to environmental and climate change causes.

This aristo­cratic British model who was a muse to great designers died suddenly at 50. The family said arrangements for a memorial service would be ann­ounced but they did not disclose her cause of death till now - suicide. Police Scotland said there were no suspicious circumstances.

Stella McCartney wrote beautifully about her late friend. Fashion house Versace paid tribute to Tennant, saying: “Versace is mourning the death of Stella Tennant. Stella was Gianni Versace’s muse for many years and friend of the family. Gianni’s sister Donatella Ver­sace, who inherited the company on her brother's 1997 death, post­ed a photo of Tennant in a tribute to the model. Fashion de­signer Marc Jacobs said her beauty, style and body language combined with her man­n­ers and personality were like no oth­er.

Family History
Stella Tennant was a granddaughter of 11th Duke of Devon-shire Andrew Cav­en­dish and his wife Deborah Mitford who also came from a stylish, eccent­ric, aris­t­o­cratic family. The Mitfords were a family this blog was very familiar with. The Mitford sisters, Nancy, Pam, Diana, Unity, Jessica and Deborah, were all born in the early C20th to Lord Redes­dale and his wife Sydney, and raised in the Cotswolds. They had a bro­t­her Tom who later died in action in Burma in 1945.

Jessica & Deborah later married nephews of prime ministers Winston Churchill & Harold Macmillan respectively, and Deborah and Diana both married wealthy aristocrats (Cavendish and Guinness respectively). But despite their privileged upbringing as members of the arist­oc­racy, some of the daughters went on to shock society with their extreme politics and lifestyles .

I will only look at three of the daughters. Unity Mitford (1914-48) was a staunch supp­orter of the Fascist movement and an intimate of Adolf Hitler. It was Unity who had introd­uced her sister Diana Mit­ford to the Fuhrer back in March 1935. Having become disapp­oint­ed with mainstream British politics, Sir Oswald Mosley became the leader of the Brit­ish Union of Fas­c­ists in 1932. So it was not a surprise that when Diana and Mos­ley married in Joseph Goeb­bels’ draw­ing room in Oct 1936, Unity and Hitler were there to celebrate.

The Duke of Windsor married Wallis Simpson in June 1937 in France. But cut off from the British royal family, the new Duchess of Windsor became the closest friend of Diana Mit­ford, wife of Fas­cist leader Os­wald Mosley. The Wind­sors, Mosleys and Goebbels must have been very cosy together. 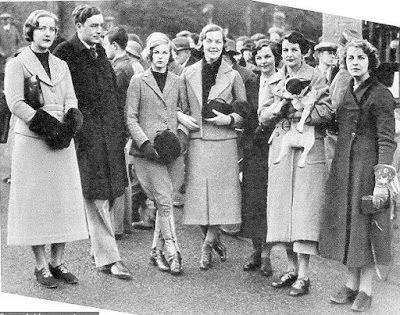 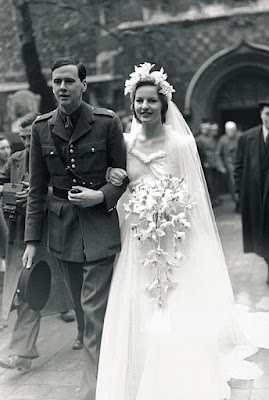 Deborah Mitford married Andrew Cavendish (later Duke Devonshire)
in 1950
In 1939 Hitler warned Unity & Diana that war with Britain was inevitable and imminent, and they should return to the UK. So after 5 years in Hitler's inner circle, Unity’s love for the Fuhrer had to end. On the day war was declared, Unity shot herself in the head in Munich. She survived, returned to Britain and spent her last years on Inch Kenneth island.

Deborah Mitford (1920–2014) was an Eng­lish aristocrat, writer & socialite. She was the youngest & last surviving of the 6 Mit­ford sister. She married Lord Andrew Cavendish, younger son of 10th Duke of Devonshire in 1941. Older brother William Cavendish was married to Kathleen Kick Kennedy, sister of the future president, a connection that placed Deborah in the Kennedy circle!! When older brother Marquess William Cavendish, was killed in action in 1944, Andrew Cavendish became heir to the title; in 1950, on his father’s death, he became 11th Duke of Dev­on­sh­ire. The Duch­ess remained the main public face of Chatsworth House for decad­es, supervising the restoration of paintings and furniture to the state rooms and the creation of a farm shop, restaurant and gift shop. What a family Stella Tennant came from!! 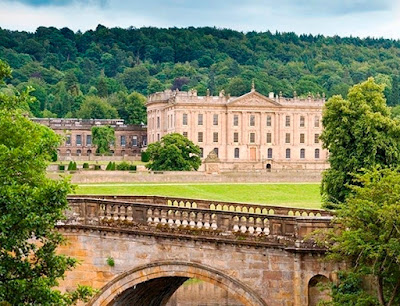 I did not realise Stella Tennant had died! Yes, quite the extended family. One of the anticipated treats in store for us for the cancelled trip to England last year was Chatsworth House. Luckily, it's not going anywhere soon.

And I didn't realise Stella's family had links to the Kennedy family in the USA.

Hello Hels, It is a tragedy when someone who has so much to give and receive from the world dies so young. It surprises me that the mother of teenagers would kill herself. Wikipedia noted that she had mental problems and had separated from her husband in 2020. The article also said that she was the niece of Stephen Tennant, the "Bright Young Thing" whom you have discussed before.
--Jim

I suppose the Cavendish family was so big and so well connected, we are certainly going to come across them in any discussions of modern British history - aristocratic architecture, relationships with the Fascists in both Britain and Germany, Houses of Commons and of Lords, art collections and the Royal Academy of Arts etc etc. You will love Chatsworth House, even if it is a year or two later than you planned.

The irony in this story is that Ambassador Joe Kennedy had been treated by the British press like American royalty, and Kick Kennedy was adored in Britain. I knew about Kick Kennedy's great love for, and marriage to William Cavendish, especially because her father Joe Kennedy forbade her marriage to a Protestant. But they married (in a registry office) anyhow, until Cavendish was killed in action a short time later.

From the White House, JFK wrote to his late sister’s mother-in-law Deborah Duchess of Devonshire telling her “all of us felt that the arrangements that you have made for Kathleen were beautiful".

good on you! I had been _very_ impressed by Stephen Tennant, the Bright Young Things, Cecil Beaton and Siegfried Sassoon whom we have discussed before. But when I was looking at Stella's family for this post, I forgot to have a look at the Tennants.

thank you. I never took much notice of models and fancy new fashions. But Stella Tennant stood out as being closely connected to the Great and the Good (and the Awful) of Britain for 3 generations. I am still amazed.

Having read a lot about the Mitfords I never knew about Stella Tennant although I remember her name. For such a person to have many kind things said about her and written about her, she must have a nice person. So much tragedy connected to the Mitfords and this is one more.

the first book I read about the Mitfords was Hons and Rebels (1960) by Jessica Mitford. Not only was she a daughter/sister in this aristocratic family; she was also a journalist in her own right. Great book, but the family was so split I had no way of knowing whether her book was biased to this side or that. Later I found she was a dedicated socialist in the USA :)

Likewise, I didn't know about Stella Tennant's links to the Mitfords until much later.