Were American Fascist organ­isations closed down in WW2, or not even then?

The initial support for American Fascist organ­isations came from Germany. The Friends of New Germ­any was created with help from New York’s German consul, so these pro-Nazi Fascists were naturalised German emig­rants who were based in New York or Chicago. The Friends existed into the mid-1930s, and although it always remained small, the org­anisat­ion busied itself with attacks against Jews, Communists and the Versailles Treaty. 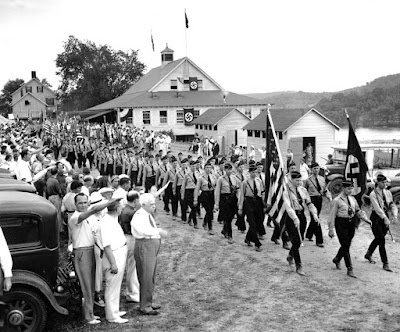 German Fritz Kuhn (1896-1951) emigrated to the USA in 1928 and became a naturalised citizen. Kuhn joined the American Friends of New Germany and quickly rose to the leadership level. When the Friends of New Germany closed down, he understood that the only way for a pro-Nazi movement to suc­ceed in the USA was by building an organisation based on 1] Amer­ican citizens of German des­cent and 2] promoting a favourable view of Nazi Ger­many.

German-American Bund members saw themselves as loyal, patriotic Americans who were strengthening their ad­opt­ed homeland, protecting it from Jewish, Communist and black cul­tural influences. They urged US neut­ral­ity in European affairs, to avoid a clash between Germany and America, and to avoid Germany having to expend resources on yet more Europ­ean conflicts. At pat­riot­ic Bund rallies, the American flag an­d the swastika appeared, and both national anthems were played for the 200,000+ followers. 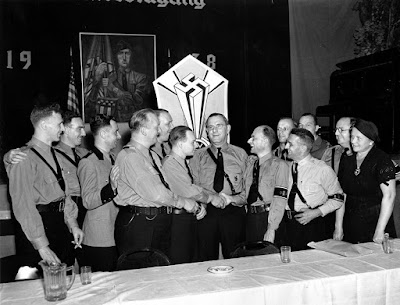 The Bund’s most publicised rally was at New York’s Madison Square Garden in Feb 1939. Inside Kuhn took the stage in an arena over­flowing with 22,000 fanatical sup­porters and delivered a rousing speech decrying the USA’s suicidal tolerance of paras­it­ical aliens. Kuhn specifically condemned President Roosevelt, call­ing his New Deal the Jew Deal and crit­icising Bolshevik-Jewish American leaders. Outside was a huge crowd of anti-Nazis, protest­ing loudly. The 1,500 cops on duty were ord­er­ed to halt all persons entering the neighbour­hood with prov­ocat­ive, anti-Nazi signs. Does all this sound familiar in 2019?

Kuhn was gaoled and replaced by a leader who may have wanted to continue Kuhn’s crus­ade, but WW2 broke out in August 1939. Thank­fully the Bund was officially disbanded days after the bomb­ing of Pearl Harbour in Dec 1941 and the USA’s declaration of war.

By the time the USA joined the war, I assumed Nazism would never raise its ugly head in the USA again. WRONG! Other pro-Fascist org­anisations continued to promote the Nazi values vigorously.

Focus on the Ku Klux Klan and the Christian Enforcers. Then examine Silver Shirts, a para-military movement founded in 1933 by William Dudley Pelley. The Silver Shirts found common ground with the anti-Semitic, white-supremacist ex-Bundists. The Friends of Progress was a Californian association run by Robert Noble and strongly in­f­l­uenced by Mein Kampf. The Friends held rall­ies in California, with members of the old Bund often joining in. Noble was sent to prison in 1942 for wartime sedition.

Charles Lindbergh, aviation hero, was sent by the American govern­ment to Germany to inspect the Third Reich’s air fighters. During this tour, Lindbergh met with top Nazi officials, and was presented a Grand Cross of the German Eagle by Hermann Göring. In 1940 Lind­bergh, called pro-Nazi by some historians, was a leading voice in the America First movement, determined to keep the USA out of WW2. In Sept 1941 Lindbergh publicly denoun­ced President Roosevelt and America’s Jews for pushing the country towards the war. 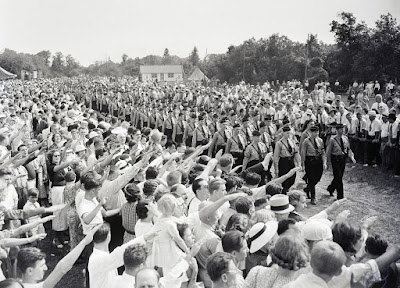 So which group was responsible for funding, publicising and org­an­ising the anti-Semitic, anti-Black riots at a Paul Robeson concert in Peekskill New York in 1949? The Ku Klux Klan! 80% of the concert goers were Jewish. Despite the most tragic world war having finish­ed only a couple of years before, the pro-Fascist mobs screamed We are Hitler’s boys, here to finish his job. The violence overflowed even to a bus of blacks travelling along the highway to visit the Roose­v­elt home in Hyde Park. 145 Jews and blacks were hospitalised.

Wesley Swift was the most significant figure in the early years of the Christian Identity Movement when he moved to California as a Ku Klux Klan organiser and rifle instructor. In 1946, he found­ed his church and in the 1950s, he became the West Coast repres­ent­ative of the Christian Nationalist Crusade. Swift also hosted a daily radio channel in California in the 1950s and 1960s, broad­casting that Aryans were God's chosen race and that non-Caucasians could never be saved.

The National States' Rights Party was an ultra-right, white sup­rem­ac­ist party that was founded in 1958 in Knoxville Tennessee by Ed­ward Reed Fields. The party argued for states' rights against the advance of the civil rights move­ment, and created links with the Ku Klux Klan & Minutemen. This white supremacist movement appealed to older far-right groups incl­uding the Christian Anti-Jewish Party and the United White Party.

Clearly pro-Fascist, anti-Semitic and anti-black organisations in the USA continued to rally. The American Nazi Party’s founder and leader, George Lincoln Rockwell (1918–1967), was one of the most significant extremist strategists and ideologists of the post war period (until 1962). His influence has only inc­reas­ed since his death five years later. A power­ful catalyst and innov­at­or, Rockwell broadened his constit­uency beyond the core Radical Right by articulating White Power politics.

Rockwell had a major role in growing Holocaust revisionism, now a Far Right orthodoxy. He helped politicise Christ­ian Id­ent­ity, America's most influential right-wing religious movement, and united an international organisation of neo-Nazis. Rock­well even held counter-rallies to civil rights marches in the 1960s! 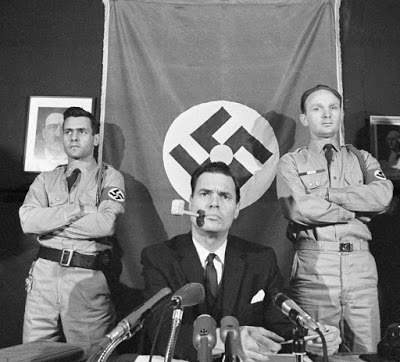 Deputy Commander Matt Koehl assumed command after Rockwell was assassinated in 1967. Koehl emphasised the positive aspects of German and American Nazism and the glories of an achievable, all-white society.

Despite the horrific war, all of these extremist movements clearly continued to have appeal in the 1950s and 60s. The USA seems to have protected the rights of neo-Nazis, white suprem­ac­ists, Ku Klux Klan and other groups to express their views openly.

Bradley Hart’s Hitler’s American Friends: The Third Reich’s Supporters in the United States (2018) argues that the threat of Nazism in the USA before WW2 was greater than expected, and that those forces born of pre-WW2 isolationism still have lessons for us all.

With the isolationist cries of 'America First!' once again being bellowed by politicians, Hitler’s American Friends is an important reminder of where we once were as a country and what must be done to stop extremism from poisoning mainstream ideals of patriotism.

Arnie Bernstein,
Swastika Nation: Fritz Kuhn and the Rise and Fall of the German-American Bund

Hello Hels, Lindbergh was America's greatest hero for a while, but he tossed all that acclaim away for many people when he came out with his extreme political views. Phooey on him, but it is interesting that his daughter married the Dartmouth academic and entertaining writer Noel Perrin.
--Jim

Many thanks. The book will be very important to read, especially for Americans who seem to deny that extremism could poison the nation's mainstream ideals of patriotism. I ended this post in the mid 1960s, but I hope other bloggers pick up the topic over the last 50+ years.

*nod* Charles Lindbergh was a real hero, based on his undeniable aviation skills. Yet even if he was a Nazi sympathiser during the first 3 years of World War Two, and even if he was determined to keep the USA out of WW2, everything changed once USA joined the Allies. After Pearl Harbour, America First ended in disgrace and Lindbergh’s reputation was ruined.

The worst aspect was just beginning. Imagine how American families, with sons and husbands away at war, felt when Lindbergh publicly attacked President Roosevelt. Lindbergh's language was treasonous :(

When you characterize Charles Lindbergh as "presumably a Nazi sympathizer," you should offer some evidence to back up your presumption. It its true that on his official visit to pre-war Germany, he was greatly impressed by its military buildup. He drew the conclusion, confirmed by subsequent events, that the USA military was woefully unprepared for war in 1941. That was a legitimate position to hold but does not make him a Nazi sympathizer.

Nevertheless, Roosevelt and his supporters came close to branding him a traitor. His commission in the Army was taken away but after the attack on Pearl Harbor, he offered his services despite his age and growing family. Eventually, he trained pilots in the Pacific and even participated in some actual combat.

Thanks for commenting. I will modify the sentence immediately.

Had Lindbergh been a contientious objector, I would have thought that was a very moral, anti-war response. But he was not; rather he was against war with Germany. In his three trips to Germany before the USA came into the war, he visited each Luftwaffe site and seemed pleased that the Luftwaffe could take on the rest of Europe and defeat them.

The Fascist symbolism certainly came from 1920s and 1930s Germany. But the close connections with the KKK suggest the racist beliefs were 19th century and American.

Symbolism was actually critical. I can imagine that the citizens of New York and Chicago would have found the Bund etc modern, clean, European and well organised. The KKK, on the other hand, may have looked rural, Southern, old fashioned, superstitious and a bit chaotic.