Every country in Europe tried to take over Albania. So did Enver Hoxha

Albania’s dark, modern history should not block out its post-Roman and medieval past as a model of Mediterr­an­ean history, playing host to Greeks, Romans, Venetians, Normans and Ottom­ans. Now we need to analysis Albania’s up-and-down history going back centuries. I am out of my comfort zone here, so thanks to Rhys Griffiths.

Following the fall of Rome, between the C4th and C7th AD, Albania became part of the Byzantine empire. In the C12th the region in north-central Albania was the site of the first autonomous Albanian principality, Arbanon.

But in the medieval era, Albania became an attractive country to strugg­le over. In 1272 the new Kingdom of Albania ex­tend­ed from the region of Durazzo, south along the coast to Butrint. There was a major attempt to advance further and in Dec 1280 Angevin forces (i.e from Anjou) captured Berat and besieged its castle. 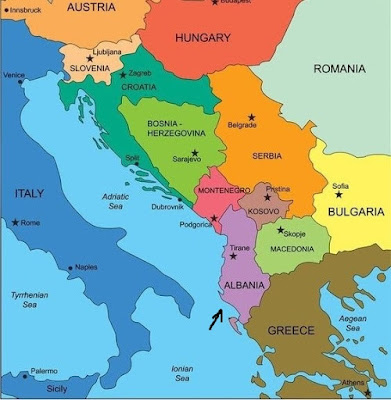 Albania and its neighbours Greece, Macedonia, Kosovo and Montenegro

The Byzantine Em­p­eror Michael VIII wanted Pope Greg­ory X to stop his Latin advers­aries. Pope Gregory, the main supporter of the union of the chur­ches, died in 1276 and the next pope re­stricted Charles Count of Anjou's movements. But in Feb 1281 Char­les ret­aliated by purposely placing a French Pope at the head of the Cath­olic Church. The Byzantine Emperor was excommun­ic­ated by the new Pope and Charles' launched an expedition against him.

A Byzantine counter-offensive foll­owed, driving the Angevins out within a year. But how did it happen? The Sicilian Vespers was a rebellion on Sicily that broke out in 1282 against the rule of King Charles I; he had ruled the Kingdom of Sicily since 1266. The government of King Charles of Anjou quickly lost control of the island and Charles’ kingdom was further reduced by the Byzantines to a small area.

Note that the Angevins held out until 1368 when the city was seized by Albanian Prince Karl Thopia. But even that didn’t last for long. In 1392 Karl Thopia's son surrend­er­ed to the Republic of Venice.

Clearly every ambitious power in Europe had fought over Albania (and other small count­ries). In time, parts of Albania were occupied by Venet­ian, Norman, Serbian and Bulgarian forces, before becoming part of the Ottoman Empire in 1431. The Ottomans required Albanian chiefs to send their sons to the Turkish court as host­ages. After leaving Ottoman service one son, Skanderbeg, returned to Albania, con­verted to Christ­ianity and heroically led a rebellion against the Ottoman Empire in what is today­ Albania and Macedonia.

Ottoman rule lasted from 1431 until Albanian independ­ence in 1912, spreading Islam within Albania until it eventually became the main relig­ion. As elsewhere in the Balkans, Ottoman rule all­ow­ed local chiefs to rule, in return for tribute and military support.

Eventually Albania was being courted by Austria and Italy. Al­ban­ia’s first nationalist organisation was founded in 1878: the League for the Defence of the Rights of the Albanian Nation in Prizren.

With the Ottomans deeply involved in the First Bal­kan War, Albania declared independence in Nov 1912. But then it became an Italian protect­orate in June 1917. 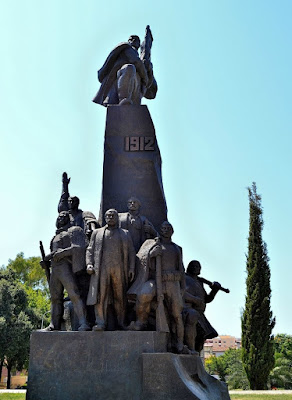 Albania achieved statehood after WW1, but it was a miserable time in which no government could last. Ahmed Bey Zogu had first served as Prime Minister of Albania (1922–4), then as President (1925–8), and finally as King Zog and Royal Albanian Army Field Marshal (1928–39). And throughout these years, Ottoman Albania had remained an unhappy poverty-stricken, largely illit­erate country, with little ind­us­t­ry and no nation-wide railways, universities or large cities. The peasantry were under the control of their local medieval lords, and the regime was reliant on Mussolini’s Italy.

In 1939 Benito Mussolini annexed Albania for Italy and exiled King Zog. After Germany invaded Yugoslavia in 1941, everything changed. That year, Enver Hoxha (1908–1985)  joined the Albanian Communist Party. Yug­o­s­l­av com­munists made him 1st secretary of the party’s Central Commit­tee & political commissar of the Army of National Liber­ation. When German troops occupied Albania in 1943, national resistance groups of the left and the right fought the Germans and each other. Hostile Albanian groups sometimes collab­orated with the Germ­ans against Hoxha, whose super­ior ruthlessness enabled his men to dominate the Albanian Army. 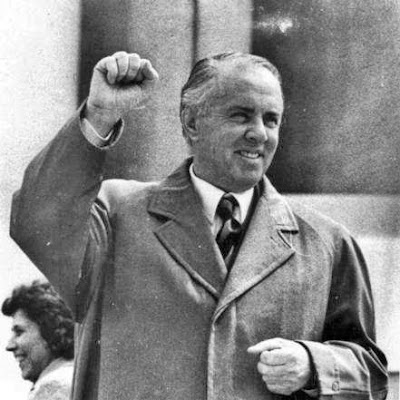 Late in 1944, with the Germans in retreat, an anti-Fascist congress declared Hoxha prime minister of Albania; he headed a victorious parade into Tirana and retained his position from the liberation of Albania until 1954. At first Hoxha was a close colleague of Marsh­all JosipTito; Alban­ian partisan divisions had gone into German-occupied Yugosl­avia where they fought with Tito's men and the Soviet Red Army in a joint campaign to destroy German resistance. But that didn’t last. Hoxha and Tito split in 1948.

After the break between Tito’s Yugoslavia and Moscow, Albania received massive aid from the Soviet Union. So Hoxha declared himself a communist and a huge admirer of Joseph Stalin. Finally, as 1st secret­ary of the Party of Labour’s Central Committee, Hoxha became de facto head of state for the rest of his life. Hoxha and his government adopted pol­ic­ies that would denude the rural land­lords of their land and power, organise the peasants into collect­ive farms, grow enough food to feed the entire population, estab­lish a universal health care and nation­al­ise the banks. The Albanian language was resur­rected, mod­ern industries were developing and the oppression of women was to end. 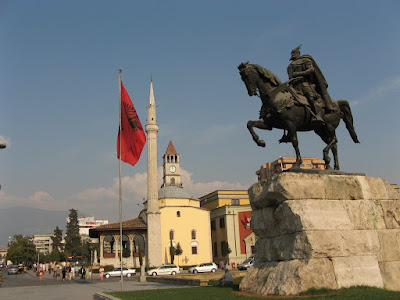 In a country that was 90% Islamic and 10% Christ­ian, the greatest pun­ish­ment for the locals was the closing of all mosques, churches and religious institutions in 1967. All school education had to be secular, at least until the ban on religion was lifted in Dec 1990.

Hoxha began a ruthless modernisation policy that alienated his political rivals, traditional Muslims and Christ­ians, impoverished landowners and peasants. As a result, Hoxha be­came increasingly paranoid about growing opposition to his rule. In a population of c2.5 million, 5500 Albanians were executed, 24,200 were sent to forced labour camps and 200,000 became internal govern­ment spies.

Diabetes killed Hoxha in 1985 at 76. He had transformed Albania from a primeval relic of the Ottoman Empire into a modern but brutal industrialised country. His trusted colleague Ramiz Alia took over.

Sadly, Albania is seen as largely 'bandit country' in the UK today. It is certainly still the poorest European country. After World War Two they ended up with many more Jews than they started with - a testament to the protection that 'Albania Proper' gave them.
CLICK HERE for Bazza’s righteously rebarbative Blog ‘To Discover Ice’

I think the Ottoman Empire had as lot to answer for, in the years before the First World War. But not just in Albania.

Hello Hels, I just looked over the Wikipedia article on Hoxha in addition to your article. It seems that he was prey to all of the excesses that such powerful "leaders" usually indulge in. While he may not have entirely ruined Albania, what he did accomplish was probably not worth the price in the elimination of basic human rights and freedom.
--Jim

that is impressive. Either the WW2 period was so chaotic, the Albanians didn't know who was in their country. Or the Albanians understood oppression well, and wanted to protect the local Jews and any Jews fleeing from outside.

I think Albania, the north coast of Africa, the old Yugoslavia, parts of Bulgaria and Hungary, Jordan, Syria and Iraq, Turkey and Ukraine would agree with you. But I am not sure that if Albania had been taken over by the Austro-Hungarian empire for centuries... it would have been treated any better.

ahh there is an issue that should cause concern all over the world. We have to explain why perfectly normal, caring adults become brutal mass murderers, after they replace their own government with a dictatorship. Think of Pol Pot, for example. He was a teacher in poor schools and in a monastery, before he killed thousands of his Cambodian fellow citizens. Hoxha originally _just_ wanted to make his nation well educated, healthy and fully employed.

What happened to the dictator's brain?

Goodness, what a history! And yes, once someone gets supreme power, they go crazy, but no doubt persuade themselves they are doing everything for the people, who will thank them and love them when they realise this. Anyone who disagrees, of course, is against the common good.

The Guardian (1/5/2016) wrote about Albania’s socioeconomic progress in the first 15 years of Hoxha rule and the country’s transformation from a feudal, clan-based dictatorship into a modern state with the draining of the coastal marshlands, eradication of malaria, successful drive against illiteracy, expansion of health services and development of the resource extractive industries, albeit with a semi-militarised labour force.

Clearly Hoxha wanted to be popular and loved! Until he didn't.

Hi Hels - I really need to read this through anon and to check up a couple of other sources - My knowledge is hopeless in this area of Europe ... I like the map though - reminds us about other countries down there ... I always forget Albania is on the Adriatic Sea, whereas Bulgaria is on the Black Sea ...

I did find this link - and as Patrick Leigh Fermor's books have impressed me ... I'll add it here - hope you don't mind - if you do - please delete ...

I will read up sometime ... cheers Hilary

Not only could most of us NOT point to Albania on the map. But spouse and I were driving from Athens and Salonika to Dubrovnik and Split, without going through Albania! I wonder why we drove so far out of our way - was there no sealed road from Greece into Albania back in 1972? Did the maps leave the space that was Albania blank?

Great reference,. Many thanks.

Its interesting about dictators starting out Ok . I have a friend who is Eritrean and she was telling me about their current president who was their leader during the war with Ethiopia and was apparently a wonderful leader who was inspirational to his people and got basic services running in very difficult circumstances( Read The Road To Asmara) She was a fighter as was her husband . She named her first born after President Afeworki and now is a refugee whose brother in law disappeared around 2001 never to be seen again after he set up an opposition party to contest an election . Now this president is a nightmare who is holding his country back from developing . Maybe the leader of a revolution is not the best leader fro consolidation?

that story reminds me of Fidel Castro. In the beginning he and his small army of guerrillas had to overthrew the brutal and corrupt military leader Batista in 1959. Promising to give Cuba back to the ordinary Cubans and not just to the mega-wealthy, Castro could not have been popular amongst his people. Yet he too wanted to expel the old Batista supporters, by death sentences or exile, and by ensuring a one-party political system.

So what process do did these civilised men go through, en route to dictatorships? Testosterone overload? Paranoia about others grabbing his power? Physical damage to the brain via tertiary syphilis, dementia or arteriosclerosis.

I think that it starts out with The ends justifies the means and moral lines are crossed and the brain becomes desensitized to the evil and they are surrounded by scared yes men who don't challenge them and the there is also a belief that they alone can save the country etc. Obviously some are just socipathic but it seems to me that a sense of destiny combined with narcissism is a dangerous mixoover the longer term.

"They alone can save the country" .. yes indeed. But how can a perfectly well educated, civilised man later _forget_ the values he started out with and cross over to evil?

Bashar al-Assad was a clever, sensitive and gentle doctor who did his post-graduate training in London in ophthalmology. Since he became president of Syria, 400,000 of his civilians have been murdered, 5 million citizens are internally displaced and another 5 million fled across the borders.