Marie Grosholtz (1761-1850) was born in Strasbourg. When she was 6, her widowed mother took Marie to Bern Switz­erland. There the family moved into the home of phys­ician Dr Philippe Curtius (1741–1794), for whom mum acted as housekeeper. When he moved to France in 1766, he took mum and Marie with him.

Dr Curtius used his skill in wax modelling to illustrate anat­omy. The first exhibition of his waxworks was shown in 1770, and drew many people. The exhibition moved to the Palais Roy­al in 1776 and the doctor became a member of the Academy of St-Luc two years later. And he opened another location on Boulevard du Temple in 1782. 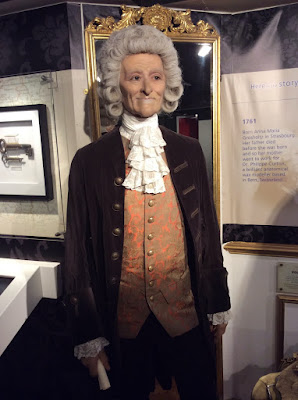 Dr Curtius taught young Marie the art of wax modelling and her first wax sculpture was of Voltaire, in 1777. At 17 she became the art tutor to King Louis XVI's sister at the Pal­ace of Versailles.

She moulded King Louis XVI’s head after his execution. When Jean-Paul Marat was stabbed in his bath by Charlotte Corday, the National Assembly instructed Marie to make his death mask and to sketch the scene for the painter Jacques-Louis David. After Charl­otte Corday’s own execution, Marie took a cast of the dead woman’s face, and lat­er mod­el­led Marie Antoinette’s and Robespierre’s severed heads.

As Marie was in Paris during the Revolution, she knew that a mob stole the wax busts of the Duc d’Orleans and Fin­ance Minister Necker from their exhibition, and paraded them about the streets in a mock funeral. The mob was shot at, marking the first real blood letting of the Re­v­ol­ution in July 1789, and stoked the storming of the Bastille 2 days later.

The Reign of Terror was the period of the French Revolution from Sep 1793-­Jul 1794. With civil war spreading from the Vendée and hos­tile armies surrounding France on all sides, the Revol­ut­ion­ary government decided to intensify terror and to take harsh measures against the suspected enemies of the Rev­olution (nobles, priests). In Paris a wave of exec­ut­ions followed. In the provinces, surveill­ance committees ins­tit­uted local terror campaigns.

To­wards the height of the Terror, Marie was arrested and impr­is­on­ed for being pro-royalist for three months awaiting exec­ut­ion. So to prove her allegiance to the Revolution, she was forced to make death masks of guillotined nobles, including the King and Queen. And many of the heads she handled had been her Uncle Dr Curtius’ friends. It was a bloody and hideous task :(
Other fam­ous people Marie modelled includ­ed Jean-Jacques Rousseau, Ben­jamin Franklin and Sir Walter Scott. In fact during her career, Marie met, and often mod­elled from life, the most famous personages in history then, her personal con­t­emporaries. 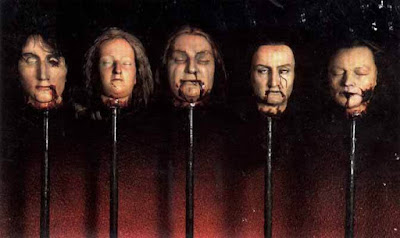 Marie Grosholtz inherited the doctor's vast collection of wax mod­els foll­ow­ing his death in 1794, but now she was on her own. Hoping to strengthen her position, she marr­ied the engineer Francois Tus­saud in 1795. The Tussauds had two sons, Joseph and François, but the marriage failed and Marie never saw him again after 1802. As France had become fixated on Napoleon, Marie left Paris, taking the boys and her waxworks across the Channel.

Marie couldn’t speak English, but they couldn’t return to France during the Napoleonic Wars. So they continued to travel­ acr­oss Great Britain and Ire­l­and for years, exhibiting her collect­ion. They fin­ally set­tled in Lon­d­on, in Baker St and Portman Square, and acc­epted an invit­ation from Paul Phil­id­or, a magic lan­t­ern pioneer, to ex­hib­it at London’s Lyceum Theatre. Alas Philidor took half her profits.

It was in Baker St that Madame Tussaud opened a museum in 1836. One of the main attractions of her museum was the Chamber of Horrors, an exhibition that included vic­tims of the French Revol­ution and newly created figures of mur­der­ers. I am assuming the most notor­ious charact­ers were segreg­ated in the Chamber of Horrors to prot­ect children. Yet I liked the reviewer who saw the Horrors as a child: “Guy Fawkes crouching by a barrel of gunpowder had terrified me, as had a pec­uliarly pockmarked waxwork of Hans Christian Andersen. The Chamber of Horrors was certainly upsetting, but not as much as the tableau of the Battle of Trafalgar. This had noise and lights and you felt you were standing on the gun deck of HMS Victory. There, breath­ing his last, was the bloody, pale body of Lord Horatio Nelson.

The gallery originally contained c400 different figures, but fire damage in 1925, and German bombs in 1941, rendered most of the early models defunct. The casts themselves have survived, all­ow­ing the historical waxworks to be remade, and these can be seen in the museum's history exhibit. The oldest figure on display is that of Madame du Barry, the 1765 work of Dr Curtius. Other early faces included Robespierre and George III.

Madame Tussaud related her own role in history to fascinated audiences: she had lived at Versailles, been art tutor to Louis XVI’s sister and cast the king from life. Later, during the Revolution, been ordered by the National Convention to duplicate his severed head. There was the king’s blood in her lap. Listen, she said, I am history!


[But note that some disagree. “At its heart, Tussauds isn’t about history: it’s a museum of the human body. It’s not about what these people achieved, but what they looked like”.] 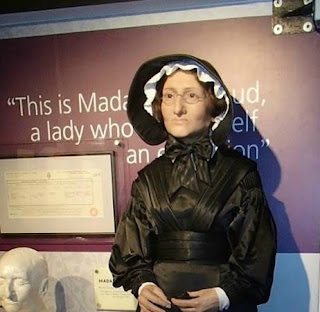 As she suffered from more severe asthma, Madame Tussaud re-found her Catholic faith. Her sons were at her Baker St home when she died in 1850 aged 89. Her life had been both an ast­ounding surv­iv­or’s tale and hist­or­ian’s dream. She was buried in the Catholic chapel in Fulham Road, with many French exiles before her.

By 1883, the restricted space and rising cost of the Baker St site prompted her grandson Joseph Randall to commission the build­ing at its current Marylebone Rd location. The new exhibition galleries were successfully opened in July 1884. However Randall had bought out his cousin Louisa's half share in the busin­ess in 1881, and with the extra building costs, the business strug­gled. A limited company was formed in 1888 to attract fresh capit­al, but was diss­olved after family disagree­ments. So Tussaud's was sold to a group in Feb 1889, led by Edwin Josiah Poyser.

The first overseas branch of Madame Tussauds was opened in Amsterdam in 1970.the

Almost everyone would have heard of Madame Tussaud, but who was she? Now we know. Thank you.

Hello Hels, Who knew that Mme. Tussaud was a witness and part of so much history! I disagree with the criticism "It’s not about what these people achieved, but what they looked like.” First of all, what people looked like is an intrinsic part of their history and achievements (perhaps especially when what they achieved was to be beheaded or murdered). Moreover, their historic importance can be brought into focus when people who started by looking at the wax figures became interested in more traditional focuses on history and its issues. Think also of archaeologists who were fascinated by mummies when they were young.

When I was in London once I lucked upon an exhibit of the old wax anatomical models. It was fascinating beyond description.
--Jim

p.s. Without Mme. Tussaud, we might not have had all those Vincent Price waxworks movies, with the vats of boiling wax in the cellars, so we can also chalk up those to her credit.

What a brutal era she suffered through. It is amazing that she turned out normal.

It is so strange. We took the boys to Madam Tussaud many years ago - they loved the displays while I felt weirded out. But none of us knew much about the Tussaud family or the French Revolution. Thank goodness for blogging!!

Not only did Madame Tussaud live at exactly the right time to capture a pivotal part of French and European history. But she also had a great eye for keeping the visual relics alive and accurate forever.

History is normally recorded in government, military or church texts, but how much more interesting for us when we "read" history in sculpture, stained glass, porcelain or any other medium. So I agree with you. Probably the appearance vs achievement argument would be a non-issue, if we accepted that text based history was not the only valid source of information.

It would have been impossible to survive the horrors of the revolutionary period without mental scarring. When I read some of Madame Tussaud's biographical writing (translated), it was clear that her early confusion, anxiety and fear clearly remained with her, all her long life.

For a more modern view of the waxworks museum, see:

Your Guide to Madame Tussauds

I think Madam Tussaud's life story is more interesting than the waxworks themselves. In all honesty I have always found them rather pointless and somehow inaccurate. It is still one of the most popular attractions in London - but not for me!
CLICK HERE for Bazza’s meaningfully minatory Blog ‘To Discover Ice’

I created a link to your blog straight away.

I understand what you are saying.. I couldn't sleep ALL night after seeing human heads of spikes :(

Re being pointless, I suppose which wax figures you saw - King Louis XVI and Napoleon might have been fascinating while Star Wars vilains might have been a total waste of time.

Hi Hels - it is an amazing story ... while Madame had such strength to keep going when women were not considered 'worth while' - she really believed in her art and kept the collection together. I've been a few times ... but her story is better - quite extraordinary ... and thanks for reminding me here - cheers Hilary

At the worst part of the Terror, Marie was arrested and impr­is­on­ed for being pro-royalist and was going to be executed. Normally women are indeed _not_ considered worthwhile, so I wonder why the Revol­ut­ion­ary Government bothered with this unknown young woman. Pro-royalist perhaps, but hardly An Enemy of the Rev­olution i.e the rich, clerical or noble.

She must have been amazingly strong. I would not have been.

What an amazing story .I have of course heard of the wax works but just assumed that they were a tourist trap and so avoided them . Might go next time I am in London . Poor woman ,that would have given PTSD fro sure .

we know that earlier centuries were more used to early deaths, hangings and tortures than we expect today. Even so, there is a limit to how much pain a young woman can endure/see without going mad herself. Post-traumatic stress disorder would have certainly been expected.

I have not seen the Australian version of Madame Tussaud, but here is what they say: "From posing with the stars and experiencing the all-new interactive features, Madame Tussauds Sydney is open daily from 10am and promises fun in the heart of Sydney’s CBD in Darling Harbour".