I was born in Czechoslovakia, but I must thank my late mother & A Brief History of the Czech Lands for this post.

In the early C19th Czech industry grew rapidly. The textile, sugar industry and iron industries all flourished. And this Industrial Revolution of course required a top quality railway system between Vienna and Prague which opened in 1845. The regions had achieved a leading level of indust­rial­isation in central Europe and had a sig­­nificant position within the Habsburg Empire. The growing ind­ustry resulted in an increase of Prague's Czech population as people mig­rated in from the countryside. 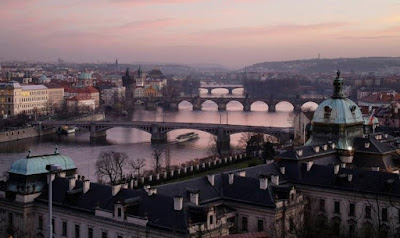 Czech nationalism and revolutionary ideas grew, and ig­nited by a rev­ol­ution in France in 1848, they exploded in re­vol­ution. Alarmed by the unrest sweep­ing Europe, the Aust­rian emperor at first prom­ised his people constit­utional changes; in fact in June a Slav Con­gress was held in Prague. When the Czech radicals erected barr­icad­es in the streets of Prag­ue, the Austrian army withdrew, but used artil­l­ery to bombard Prague. The city surrendered and all revol­ut­ions in the Austro-Hungarian empire collapsed.

However in 1859 Austria was defeated in a war with France, and 7 years later the Austrians were defeated in a war with Prussia. Fol­l­owing these two shameful experiences, the Dual Monarchy was creat­ed in 1867 where Austria and Hungary became independent states with one monarch. How­ever the Czechs were not granted autonomy, so nat­ion­al­ism and demands for independence grew. Meanwhile, industrialisat­ion cont­in­ued in Czechoslovakia, especially the coal mining, eng­in­eer­ing and the textile industries which accelerated later in the cent­ury. The strong agricultural sector made more capital av­ail­ab­le and new banks were founded, primarily in Prague. A secur­it­ies exchange was established in 1871 and a commod­ities exchange in 1887. 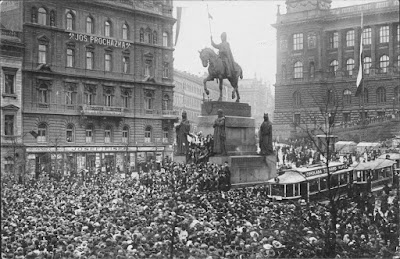 Though German was the official language, Czech language and culture survived through the years of Austrian occupation. As the Habsburgs eased their grip in the C19th, Prague and Brno became centres of the Czech national revival. The revival did not expres­s itself in pol­it­ics but in Czech-language literature and arts. And it continued as Czech institut­ions were established to celebrate Czech history and culture: National Theatre opened in 1868 and National Museum in 1890. The great Czech comp­osers Bedřich Smetana (1824–84), Antonin Dvorak (1841-1904) and Leoš Janáček (1854–1928) rose to stardom.

A Czech academic called Tomas Masaryk formed an organ­is­ation called the Czech National Committee. In Nov 1915 this Commit­tee called for an independent Bohemia and Sl­ov­akia. In June 1918, the Committee was recognised as the provisional government of Cz­echoslovakia by France, then by Brit­ain, USA and Italy. The Austria-Hungary was collapsing.

For Czechs, at least the tragedy of WWI had one great outcome: the defeat of the Central powers, Germany and Austria-Hungary, left the Habsburg empire too weak to fight for its former lands. This paved the way for the creation of independent Czechoslovakia in 28th Oct 1918. Tomas Masaryk was the first prime minister, and in 1935 Ed­vard Beneš took over.

The new republic linked ethnic Czechs (Bohemians and Moravians) with their eastern linguistic family, the Slovaks. Czechoslovakia was the only industrialised state in eastern Europe. The only deb­atable inclusion were the 3 million German speakers in the Sudet­en­land who reluctantly joined the new republic. Nonetheless the new Czechoslovakia also proved to be the only successful dem­ocracy. In the two decades between indep­endence and the Sept 1938 Munich Agreement, it was a flourishing state.

Thank you to PE Caquet for discussing the 1938-40 era. Note four sad episodes of appeasement:

A] In 1935 Mussolini invaded Abyssinia. The Italians used brutal tanks & air­craft against the Afric­ans, but the French & Brit­ish didn’t want to push Mussolini towards Hit­ler.

B] In 1937, a German air-force squad­ron bombed the Spanish town of Guernica, massacring its defenceless civilians. Fr­ance and Brit­ain “believed” that the German troops were volunteers.

C] The German army marched into Aust­ria and annexed it. This was the last straw! If Hit­ler thought he could do the same to Czech­os­lovakia, France and Britain warned, he would pay a great price. 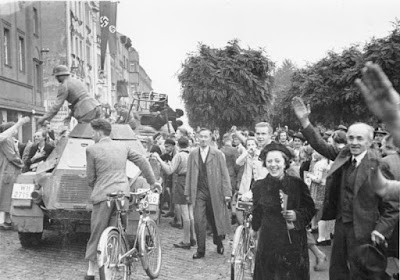 D] The 1938 Munich Agreement, that conceded the Sudeten German territory of Czechoslovakia to Germany, was the most dramatic step in ap­peasement. After his agreement with Hitler on the carve-up of Czechoslovakia,  British Prime Minister Neville Chamb­er­lain ret­urned from the Munich Conference to proclaim Peace For Our Time.

But Ch­amb­erlain and French PM Edouard Dal­ad­ier soon dis­covered that they didn’t buy peace; they actually fed Nazi app­etites! Hitler swore this was the end of his territorial ambit­ions, noting that he was leaving a rump Czech state. Only 6 months later, Hitler ordered his troops into Prague!


Britain and France believed it was worthwhile sacrificing Czech­osl­ov­akia in 1938, the better to face Germany militarily once the war started. Except that it wasn’t. A third of the German tanks at the French front in May 1940 were built in Czech­oslovakia. Germany des­perate shortages had been reliev­ed via the Czech annexation. Had the Munich Agreement not stalled it, WW2 in Europe would have begun in 1938. With arguments supporting appeasement, Cham­berlain and Daladier bought time and avoided embroiling count­ries in a conflict for which they weren’t prepared. But the price for Czechs and others was huge. As my uncle documented here.

Thank you to the wonderful Czech blog Tres Bohemes for great photos.

I wonder why the 3 million German speakers in the Sudet­en­land, who reluctantly joined the new republic, agreed to do so. In the long run, my family said, it was not a good decision.

The Austro-Hungarian Empire was breaking up by the end of the war into its historical components. When the Bohemian kingdom became the western part of newly created state, Czech leaders wanted to establish the traditional boundaries of the Bohemian Crown. This was partly for natural defensive elements (mountains) and partly for economic reasons (heavily industrialised areas).

The 3 million German speakers in the Sudet­en­land who joined the new republic were separated from Austria and came under Czech control. The Czechs really wanted to include them all in 1919 but they may have changed their mind by The 1938 Munich Agreement.

Hello Joseph and Hels, Although Germany was perhaps the center of manufacturing in Europe, Czechoslovakia was also, as you indicate, important and desirable for its factories and industry. In addition to heavy industry, think of all the jewelry, glass and ceramics that emanated from it factories in huge quantities, but always known for high quality. Czechoslovakia also became the source of much original thinking, as evidenced by many prominent Czech authors and filmmakers.
--Jim

*sighs happily* I remember the Czech architecture, writers, films and glassware, long before the first trip to Czechoslovakia. In fact I should add links to material I wrote about Franz Kafka, Alfons Mucha, Oskar Kokos­ch­ka, Franz Werfel and Swarovski crystals in this very blog.

That part of Europe, well all of Europe really, has such a complex history, but I am now a little wiser about Czechoslovakia and its own history.

How much more so in the old Austro-Hungarian Empire. And Albania, for that matter.

I had no idea that there was so much Czech industrialisation. This presents, for me at least, a new view of Eastern Europe. I also read Joe's Uncle's moving story. It's difficult to believe that these terrible events happened within living memory. It is so vitally important that these testimonies are never forgotten.
CLICK HERE for Bazza’s never knowingly novaturient Blog ‘To Discover Ice’

The problem is that now that just about all the victims of, and survivors from the Holocaust have gone, who is going to write the histories? Even our generation, born after 1945, might have known that we didn't have any aunts, uncles or grandparents.. but the next generation will probably treat the Holocaust like the Napoleonic Wars. Hideous but distant.

Thankfully Czechs were rightfully considered the most humane and moral of all Central and Eastern European countries.

This part of Europe has always had a complex history as do other parts of the world.

It is about power and the balance of power.

Very true. The only difference is that some parts of the world have very personal connections to our parents and grandparents (eg Ukraine, East End of London, Tel Aviv) and in some places we are totally neutral historians or observers (eg Sweden, Malta).

Hi Hels - you and Dr Joseph have a huge amount of knowledge. I slowly pick up snippets that can slot into the very limited knowledge I have of that era. I visited Prague and Brno in 1974 ... Prague was covered in dustsheets ... while I was at an import-export exhibition in Brno ... so didn't see much - except to note I was followed ... we all were. Thanks for the great informative post - cheers to you both - Hilary

we couldn't go to Czechoslovakia until it became independent of the Soviet Union in 1990 ish (because Joe could have still been called up into the Czech army). My mother in law was still fit and well in the early 1990s, so she took us to her homes, shop, school, her parents' cemetery, synagogue and the Prague restaurant she ran after the war ended. It was quite something watching this spritely elderly lady running us off our feet, and having the best fortnight in her entire life :)

You should go back to Prague and Brno now... you won't recognise these two beautiful cities.