Did Scotland have the most impressive Enlightenment Era?

After King Charles’ death, Jacobite Rebellions, failure of the Darien Scheme on the Isthmus of Panama (1698–1700) and the social and economic instability that fol­lowed, a very slow recovery was expected in Scotland. Instead there was the birth of a movement we call the Scottish Enlight­enment.

Scotland’s Enlightenment may have been due to the Union of 1707 when Scotland suddenly had no parliament or king to improve the country's education. OR this surge of philosophical thought was the success of the historic universities of St And­rews, Glasgow, Aberdeen and Edinburgh, at a time when England only had two. Scot­land’s Belle Époque began in the mid C18th and continued for a cent­ury. It marked a move from religion into reas­on: in politics, art, science, med­ic­ine, engineering and philosophy.

Thomas Reid (1710-96) studied philosophy in Aberdeen, then became a Presbyterian pastor. Long studies convinced Reid that scepticism was in­com­patib­le with common sense. Thus he re­jected sceptical empir­ic­ism in favour of his own Philosophy of Common Sense.

David Hume (1711-76) spent most of his time con­sidering subjects like morality, conscience, suicide and rel­igion. This sceptic distrusted miracles and the super­natural; in­stead he focused on the potential of humanity and its inherent morality. This did not go down well ..as the majority of Scotland was very religious. Hume became as one of the famous philosophers writing in English, producing important works on human nature, religion, British history and pol­itics.

His work, A Treatise of Human Nature (1739) claimed that the observational study of the science of man should be the basis of all other fields of study: religion, moral philosophy and pol­it­ics. This was a radical and controversial proposition in Scotland. As one of the Edinburgh literati/intellectual elite, Hume was a founding members of the Select Society. 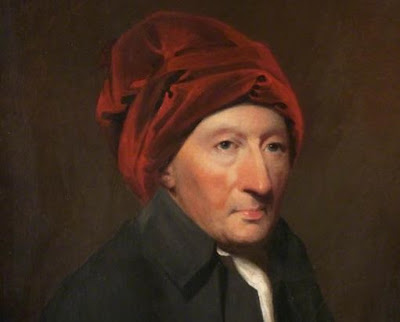 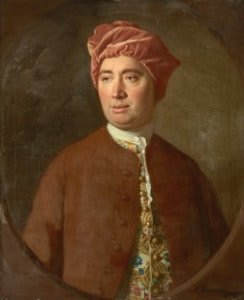 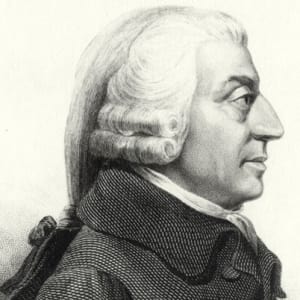 Allan Ramsay (1713-84) was born in Edinburgh, the son of the poet and bookseller Allan Ramsay. He trained in Italy and London, where he established himself in 1738, and eventually became the leading British portrait painter of the mid-C18th. Among many others he painted David Hume and King George III. Ramsay initiated the very intellectual Select Society, along with David Hume, Adam Smith and James Burnett, Lord Monboddo.

Hugh Blair (1718-1800) was a leading figure in the Church of Scot­land. He too was one of Edinburgh’s literati, an early member of the Select Society and early fellow of the Royal Society of Edinburgh. As Professor of Rhetoric at the Edinburgh Uni from 1760, he held the first dedicated chair of English in any university.

Blair gave public lectures on English language and literary crit­icism, and he chaired a literary sub-society created by the Select Society. Blair wrote a preface to James MacPherson's Fragments of An­cient Poetry in 1760. In 1763, he published A Critical Dissert­ation on the Poems of Ossian, estab­lishing Blair's reputation as a literary critic.

Adam Smith (1723-90) was a philosopher and political economist from Kirkcaldy in Fife. He belonged to the literati élite of Edin­burgh, and was friends with Hugh Blair, Adam Ferguson, David Hume and other key figures. Smith was also a founding member of the Select Society. Two of Smith's works became key texts of the Enlight­en­ment. The Theory of Moral Sentiments (1759) was a critical exam­ination of ethics, suggesting that morals arose from human sense and feeling, not from rational calculation. An Inquiry in to the Nature and Causes of the Wealth of Nations (1776), aka The Wealth of Nat­ions, advocated a free market unregulated by the state ie capitalism.

Adam Ferguson (1723-1816) was a Scottish philosopher and historian. This Father of Modern Sociology was sym­pathetic to traditional soc­iet­ies (eg the Highlands) for producing courage and loyalty. He become professor of natural philosophy at Edinburgh from 1759, transferring to the chair of Mental and Moral Philosophy in 1764. Via David Hume, Ferguson became a member of the Poker Club. Founded in 1762 by Edinbugh's literati & intellectuals, the Poker Club supported a local militia, which had been banned to the Scots since the Jacobite rising back in 1745.

James Hutton (1726–97) was a geologist, physician, chem­ical manufacturer and experimental agricultur­alist in Edinburgh. This Father of Modern Geology did work involving sophisticated chemical experim­ents and used science to theorise about the age of the earth’s rocks, upturning biblical “data”.

James Boswell (1740-95) was born into a wealthy family in Edin­burgh. His father was a judge in the country’s highest courts, so he had his son sent to an exclusive academy. Boswell entered the University of Edinburgh in 1753, where he began his law studies and expanded his social horizons. Boswell did not seriously consider a literary life until his later years, in which he began writing verses and letters for publication in The Scots Magazine. He became a writer of polit­ical essays and travel accounts, and was famous as the biographer of Dr Samuel Johnston.

Robert Fergusson (1750-74) from Edinburgh was best known for his poetry. At St Andrews University, he loved studying Eng­lish literary texts. In 1769, Fergusson returned to Edinburgh where he interacted with local singers, musicians and actors, and enjoyed theatre life. During this time he had poems published in Edinburgh magazines.


In 1773 Fergusson published a volume of his poems. He was a member of Edinburgh's Cape Club, but in late 1773 he fell ill and had to retire. Supported by the Cape Club, Fergusson died in 1774 at just 24. Edinburgh’s important publisher Thomas Rudd­iman brought out further collections of Fergusson's poems post-death which eventually inspired Robert Burns. 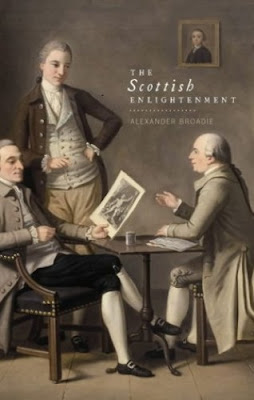 The Scottish Enlightenment
by Alexander Broadie, 2001

Robert Burns (1759-96) was born in Ayr. His parents were tenant farmers who ensured their son was well educated and widely read. In under two years, Burns had spent most of the money he made from his published poetry, so in 1789 he began work as an Excise Officer in Dumfries. The hard work this new job entailed, combined with his dissolute lifestyle, began to harm Burns' health.

Burn’s radical pol­itical views influenced many of the poems that he wrote. Alexander Pope was his favourite English poet and Fergusson was his favourite Scot­tish poet. Some years after Fergusson's tragic death in 1774, Burns paid for a head­stone and memorial inscription for his hero's grave. Burns in turn died tragically in 1796, at 37, and was buried with full honours.

Of the 153 stars of the Scottish Enlightenment recorded in Wiki, only two were women. Clearly C18th intellectual life revolved around a series of clubs, beginning in Edinburgh first and later Glasgow. Note in particular the Easy Club, Political Economy Club, The Select Society and later, The Poker Club. Perhaps women weren't invited to clubs!

You may like to read The Scottish Enlightenment and Literary Culture, edited by Ronnie Young et al, 2016.

Usually people assume that England was the cultural and intellectual country in Britain, not Scotland. But for more than a century, I think we have to acknowledge that Scotland had the best doctors and philosophers.

I found a number of well published Scottish women whose fame seems to have faded. Lady Grizel Baillie, Fanny Wright and Mary Somerville were three of them

Hello Hels, Most of these people I know, but I had never thought of them unified as the Scottish Enlightenment. I am willing to bet that, just as in England, there were a lot of distinguished women involved, especially as the 18th century wore on--writers, salon leaders, etc. A little digging will bring to light some of their stories.
--Jim

when people think of Scotland in this era, they normally think of the Highland Clearances, Battle of Dunkeld, Battle of Falkirk, Battle of Culloden and dead bodies in the snow. Scotland was definitely at least a cultural and intellectual equal, but mainly for its aristocracy, the gentry and the educated.

I wonder why Wiki's long long list of the leading figures in the Scottish Enlightenment excluded so many women. Either because they thought the women weren't important back in the 18th and early 19th centuries, or because they were important then but not any longer. Every historically inclined scientist knows that Thomas Reid was a brilliant mathematician, but who knows about Mary Somerville (1780-1872)? Her knowledge of the latest in French mathematics put her at the cutting edge of science.

Coffee houses in England and and clubs in Scotland provided the perfect opportunity for clever men to meet together and be exposed to new ideas. Salons in France and England provided a perfect place for women to gather in private homes, to meet other clever women and listen to their contributions. But I cannot find any coffee houses, salons or clubs in Scotland that welcomed women. Perhaps they did all their conversations in letters.

Hello again, I just cam across this article which might interest you:
https://news.yale.edu/2019/06/26/edit-thon-aims-put-more-yale-women-wikipedia

Apparently, if people want more women (or whatever type of article) represented in Wikipedia, they also have to participate in the editing/article-creation process. This edit-a-thon seems a good idea--people with Wikipedia expertise can help those with publishable knowledge.
--Jim

I only mentioned Wiki because the list of famous people in the Scottish Enlightenment were listed together with nothing more than name, dates and main area of expertise. Not that Wiki is a source of accurate historical information :)

There are plenty of quality books and academic journal articles about special Scottish women eg "Women, love and power in Enlightenment Scotland" by Katie Barclay & Rosalind Carr, Apr 2017. But I must admit that all the relevant books I found have been fairly recent.

i put it down to the cold and wet as to why there were so many high achievers. i really believe the human brain works better in cold temperatures.

There were 7 women in a group of undergrad medical students who wanted to be admitted to clinical teaching. Only thus could they complete all requirements to get their medical degree. But they were blocked by the Uni of Edinburgh in 1869 (which is late for the Enlightenment, I know) but it was horrific for women everywhere.

Just before and during the 18th century in Europe, the Age of Reason probably started in northern France, then spread to Germany, Russia, England, Scotland, Denmark and Sweden.

There are two likely explanations why Italy, Spain, Poland, Greece, Malta etc are often excluded.
1. the more Protestant the country, the more flexible the universities and academies were in encouraging rational thinking. But also, as you say,
2. the southern countries were so warm and sunny, scientists and philosophers would spend as much time as possible in the gardens/beaches. Up north, scholars and their books had to huddle inside to stay warm enough.

Scottish universities had the reputation of being the very best medical schools in Britain. So when the women were banned from finishing the clinical parts of their medical degrees at Edinburgh Uni, the press and public became very angry.

If the Enlightenment had meant a new reason-based order that promoted the ideals of liberty and equality, the Scottish Enlightenment was clearly over. Or that equality in Scotland did not refer to women!

I think the clear answer to your headline question is Yes as you have so thoroughly shown us! My favourite painting of that era is Henry Raeburn's depiction of Reverend Robert Walker ice-skating.
Scotland has often punched above it's weight in the Arts and Science fields.
CLICK HERE for Bazza’s oddly overdone Blog ‘To Discover Ice’

great choice, for at least three reasons:
1. Raeburn was very well connected to the Age of Reason via his friends and patrons
2. The painting's date is perfect - 1795 and
3. the Reverend might be a man of god but his image is one of reason, civilisation and human confidence triumphing over wild nature.