By the late C19th there were a few soup kitchens in American cities. But soup kitchens became urgently required only in the Great Depression (caused by the stock market crash in Oct 1929). The American belief was that the Federal Government should not be involved in providing poor relief, but that the Feds were in the best position to coordinate national efforts among public, private and non-profit sectors of society.

There were very few social welfare programmes set in place by the American government to provide support to the poor, sick, elderly or unemployed. As a result, the government was ill equipped to handle the complex needs of its citizens, a situation that didn’t change until the 1935 pass­age of President Roosevelt’s Social Security Act.

Prohibition (1920–Dec 1933) in the USA caused corruption. Brooklyn-born Alphonse Caponi/Al Capone (1899-1947) became a star of this corrupt world, a bootlegging gangster who by 1922 had become a full partner with other gangsters in gambling houses, saloons, brothels, speakeasies, bookie joints, horse races and distilleries. He also organised and ordered Chicago’s St Valentine’s Day Massacre in 1929.

Clearly Capone made a fortune during the long, difficult Pro­hibition era! Yet his alcohol-smuggling was seen by many as an act of bravery, given Prohibition’s harsh restrictions.

Capone was not charged for many of his crimes. In 1926 he was arrested for murdering three people, spent the night in gaol and the case was dismissed. Capone's first gaol sentence was in May 1929, for a minor offence. In 1931 he was indicted on 23 counts of income tax evasion. The judge found him guilty on 5 of the 23 counts; he sentenced him to 10 years in federal prison and fines in the amount of $50,000. He also was sentenced to one year in county gaol for an earlier contempt-of-court charge.

Now I wondering if most Americans have heard of the generous support that Al Capone of­fered to the hungry, during the Depression when some 40% of the labour force were unemployed! 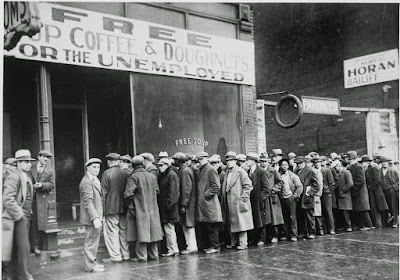 Al Capone started one of the first Depression soup kitchens, in South State St Chicago. His soup kitchen provide a placed where the homeless and poor could get free food and a rest from the struggles of sur­viving on the streets. Chicago in winter was always very bitter.

Why did he spend his lawful income, and his ill-gotten gains, on charity? Three main motives have been suggested. Firstly because he was Public Enemy #1 to the police, courts, Tax Department, his gangster opponents and to teetotall­ers across the nation, Capone might have tried to change his bad reputation via good works. And there may well have been favourable publicity in the news­papers, good for any future businesses he may have been planning.

Secondly he was very close to his beloved Italian Catholic mother, Teresa Capone (1867–1952). She expected her son to behave appropriately to the hungry, the poor and to Italian immigrants, at least when he was wealthy. Teresa was also very proud when her son rang her by phone, speaking in Italian, and she fought valiantly to get her son out of prison after his 1931 income tax conviction.

Thirdly the unemployed men desperately needed support, but the Federal Govern­ment refused to listen. The Chicago Trib­une headlined on Dec 1931 that 120,000 meals were served by Al Capone’s Free Soup Kitchen. Hundreds of desperate, starving men assembled outside the shop front, literally depending on him for their food. And he offered some of them jobs, both in the soup kitchen and in the homeless shelter he ran!

Al Capone served breakfast, lunch and dinner. Thanksgiving Day 1930 was a special pleasure for the gangster Cap­one because he fed 5,000+ hungry men, women and children with a hearty beef stew. Just before Christmas 1930, several trucks from major food store chains pulled up, bringing chickens, ducks and a couple of barrel of hams. A National Tea company truck brought a 1000 cans of corn, tea, half pound bags of sugar and candy.

Capone’s seven years as a crime boss only ended when he was event­ually found guilty of tax fraud at 33 years of age. In May 1932 he was given a sentence of 11 years and was among the earliest of inmates at the Alcatraz prison in San Francisco. 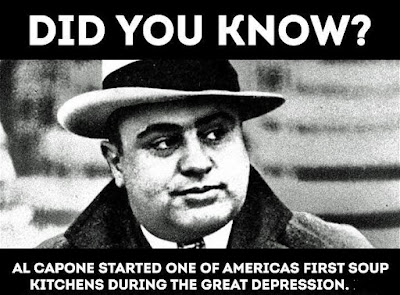 While serving his sentence in Alcatraz, he was diagnosed with syphilitic dementia. As his health deteriorated, Capone was sent to the low-security Federal Correctional Institution at Terminal Island near Los Angeles to finish his sentence; he was released in 1939. He spent his last years at his mansion in Palm Islands Florida where he died from a stroke in 1947.

I cannot find out who took control of the soup kitchen, once Capone went to gaol. However I do know that the kitchen was demolished only in the 1950s, 20 years after the Depression ended.

The irony of this entire story, i.e a mobster was doing more for the people of Chicago than Chicago was doing for its own people, did not endear the government to its citizens. Perhaps as a result, visitors from all over the world still visit Chicago and drive by Capone’s old house or visit his grave.

Teresa Capone certainly set high standards for her son and apparently he paid attention to his loved mother. At least as far as struggling migrants were concerned.

Dearest Hels, you do come from left field at times, but so interesting. I had no idea about Capone's soup kitchens.

It's quite easy to take a cynical view and say that either he had a guilty conscience or that it's easy to be generous if you're obscenely rich. But it is a insoluble dilemma; on one hand a murderous criminal and on the other hand generous beyond what we might expect.
I have often heard people state without irony that the Krays were good to their mother.
I loved Monty Python's satirical biography of the East End criminal 'Dinsdale'; viscous but fair.
"Yes he did screw my pelvis to the gate-post but I must have done something wrong. He loved his Mum."
CLICK HERE for Bazza’s repeatedly risible Blog ‘To Discover Ice’

Hello Hels, I can't work up too much sympathy for a vicious criminal who broke virtually every law of the country, and broke down respect for law and authority that paved the way for more criminals. As for his attentions to his dear old mother, how could she raise her son with such patent disregard for everything that got in the way of his reign of terror? I don't even see him as a Robin Hood-type of character; if he had used his organizational abilities only for good, then he would have been a seen as a hero.

The idea of Capone as benevolent is summed up in the old song, "on Tuesday, Wednesday, Thursday, Friday, Saturday, he's robbing everybody that he can. But he goes to church on Sunday, so they say that he's an honest man."
--Jim

Mothers from Mediterranean countries were always pictured as very close to their sons, even after the boys left home. But I imagine for Teresa Capone there were extra reasons - huge number of children, long hours of work, no English skills and poverty. Al never forgot his mother's sacrifices.

I got to Al Capone via a tortuous route. I was very angry with the USA for not providing universal health care to half its citizens. The idea that struggling families would have to withhold hospital care from their children and adults because of the costs was a national immorality I couldn't get my head around.

That there were no governmental social welfare programmes in place to provide support to the sick or unemployed during the Great Depression was even more offensive. If 40% of the labour force were unemployed, the men would have to beg on the streets, steal or put their children in orphanages. The opening of soup kitchens was a blessing.

right... and Goebbels loved dogs so tenderly, he had to be a good man at heart. But we have seen many, many times that a murderous criminal, drug dealer or gun runner could be generous to those he loved/valued, or on his knees in fervent prayer every Sunday in church.

that song is very apt:

Your blog had an influence on Chicago real estate. This week the flat that Capone, wife and mother lived in is up for sale. The last owner lost it to foreclosure.

very cute :) Here is what the real estate agent wrote:

Move into one of the first homes purchased by Chicago's most infamous mob boss Alphonse Capone. This classic 1905 Chicago brownstone two-flat built in the heart of Park Manor was purchased by Capone in 1923. Capone's wife and mother were listed as the owners of the building. When the gangster's brother Frank was gunned down by police, Frank's funeral was held in the house. The two-flat sits on a wide 68-foot lot with a spacious layout in each unit. Vintage touches feature large octagon style living rooms, full basement, and a rare brick garage... Walk to the Red Line or jump on the Skyway and Dan Ryan. Who wouldn't want to live in Al Capone's old house. This is your chance to own a piece of Chicago history.