Vermeer, Delft and the new globalisation of the 17th century

In the book Vermeer’s Hat (2009), Timothy Brook focused on these small, domestic interiors of Delft as shown in eight paintings by Dutch master Johannes Vermeer (1632–75). His work suggested that a study of globalisation should start in the C17th; this would improve our understanding of the complex exchanges that brought the world together in a more integrated economic unit back then. 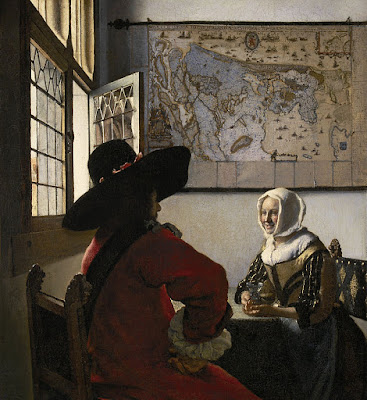 Starting with the household objects and activities found in Vermeer’s paintings, Brook was interested in viewing trade markets across the world, perhaps parts of the world that C17th Europeans didn’t know much about. He thus uncovered something of the economic and social context in Vermeer’s time, the impact it had on how people viewed their world and the unfamiliar objects from abroad that became familiar consumption goods in the Netherlands.

The author did acknowledge that earlier contacts had forged among different civil­isations, as I would have done regarding the Silk Road etc. But Brook underestimated the importance of the earlier contacts. And he overestimated how important European-directed interconnectedness was. 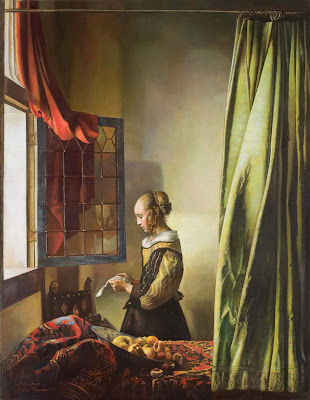 By the C17th the drive to set up distant markets lay in the European desire to reach China and obtain its porcelain and silk. It was under this powerful impetus that European ships sailed the globe to find a shorter route to the country. Once in China, Europeans would obtain direct access to its goods by settling in coastal outposts.

Brook discussed French fur traders in Canada and their relationship with local tribes; a shipwrecked Portuguese vessel whose crew also included Chinese and Indians; riots and massacres in Manila and Peru; and men sadly separated from their native lands. All to get hold of the objects that would rock up in Delft’s homes!

I am a silver fanatic, but I hadn’t understood that Europeans had lacked products of their own to sell for competitive prices. So Spanish, Portuguese and Dutch traders hunted for the one item that would allow them to buy into the vast China mark­et – silver! Nor had I understood that silver was desperately needed by the Ming Dynasty due to domestic shortage of the bullion amongst rapid commercial­is­ation. I assumed silver was exclusively a European passion.

So silver, which now had global life, was a new commodity that obsessed the era. Woman Holding a Balance weighed silver, standing in front of a painting that showed God's control in The Last Judgment. Note the viewer was invited to view the economic allegories, not religious the ones.

Vermeer’s Soldier and Laughing Girl showed an officer in a Dutch sitting room with a young woman. The soldier showed his wealth and rank, wearing a red coat, an officer’s black sash and an expensive beaver pelt hat. The pelts for a hat like the soldier's were imported from the New World, in this case by the Dutch East India Co, founded in 1602.

In Vermeer's View of Delft 1660–1, Brook showed the headquarters of the Dutch East India Co and the boats of the local fishermen. Lis­bon had been conquered by the Spanish, so the Dutch had to find their own way to the East for spices – thus the Co. created a monop­oly on all prof­its from trade east of the Cape of Good Hope. Ev­ent­ual­ly the Dutch East India Co. ran a powerful commercial empire for 200 years, helping to make the Dutch Republic a cul­turally and eco­n­om­ically successful country.

Before the discovery of the Northwest Passage, the French had to find a route to China and the beaver fur, skinned to make felt in eastern Canada, helped them cover their costs. Samuel de Champlain (died 1635 in Quebec), who roamed across Quebec crushing tribal men and trapping beavers, was also searching for an overland route to China and its wealth. 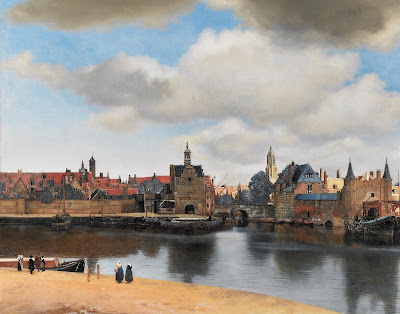 Note the other goods that had been readily traded in the New World, especially tobacco. Perhaps the Canadian beaver trade supplied the felt hats in exchange for the porcelains seen in C17th Dutch art.

Young Woman Reading a Letter at an Open Window c1658 showed a large Chinese porcelain bowl lying atop a rich Turk­ish carpet. Chinese porcelain was now more wide­ly avail­able, at least to wealthier famil­ies, and started to feature in C17th Dutch art. Fruit could be piled up in a blue-and-white porcelain bowl, and even as simple an image as this gave a clear view of an expand­ing world. The porcelain itself reflected a rare art object that could ONLY be created in China. Plus it spoke of an incident that took place in 1613 between Portuguese and Anglo-Dutch merchant ships at St Helena. With growing global trade AND the arrival of international trade struggles, globalisation was blossoming! 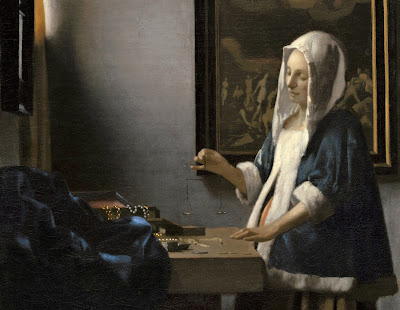 Note the maps of the world seen on walls in paintings, showing a patriotic pride which went along with the emergence of the Dutch from Spanish occupation. Perhaps the painting’s map was also used to examine trade between Europe and North America.

Conclusion
By analysing a few of the paintings of Johannes Vermeer, and by examining whatever documents he could find about him, Brook developed a picture of Delft’s C17th world. The growth in trade and exploration was facilitated, in part, by advances in navigation  & ship building technology. Thus Brook found evidence of socio-economic events and interconnectedness. Globalisation, usually thought to be a modern phenomenon, actually had its roots back then.

Vermeer was a great artist with very limited contexts. Always one or two people, always in the corner of the family's living room. The course on 17th century Dutch art was the best I have done.

Hello Hels, It is interesting how often when archaeologists dig up some prehistoric site, they find evidence of trade with various far-flung societies. Obviously considerable globalization and trading had taken place even before the various classical and ancient societies (Greece, Rome, Egypt, China, various early American civilizations, etc.) were even established.

China had huge demands for silver, and it was the only substance that they were willing to take for their various silks, tea, etc. This created an imbalance of trade for the English, and was one of the main contentions of the Macartney Embassy, which eventually led to early problems between England and China, including the Opium Wars (putting it in a very sketchy nutshell).
--Jim

Since Vermeer was so talented, we have to ask why he wasn't more ambitious, in both his settings and in his number of models. My answer: the financial struggle that came from his wife giving birth to heaps of babies and from Johannes having to work in two businesses (an inn and in art dealing). In any case, the poor man died at such a young age :(

It seems you and Timothy Brook are quite right. If Western Europeans were so keen to buy Chinese tea and silk, the Chinese government made them pay in silver. And with opium, as you suggest.

I love the way Vermeer's realistic scenes convey the domestic bliss of those times. I want to be there as one does with a good book! Reminds me of the scenes that Pierre Bonard painted.
My late mother-in-law was a Dubliner and Leah grew up thinking the word she used for fine China, 'Delft', was Yiddish but it turned out to be the Gaelic word!
CLICK HERE for Bazza’s blatherskite Blog ‘To Discover Ice’

domestic bliss and cultured taste as well. Look at the beautiful clothes on the women, the paintings and maps on the wall, the exquisite furniture, the pianos and cellos, the delft tiles and inlaid coloured windows. Even the maids look focused.

Off topic but I thought you may find this post interesting. http://diamondgeezer.blogspot.com/2018/09/dorich-house.html

Thank you. You know I spent 2 years living in London (in the early 1970s) and then went on many guided tours of London in the decades that followed. But I have not heard of Dorich House Museum at Kingston University. Perhaps South West London was a bit out of our drinking and working suburbs.

But you hit pay dirt with Russian sculptor Dora Gordine. I bumped into her the first time when she moved to Paris in 1924. Fortunately for her, and for us, she created murals for the interior of the British pavilion for the 1925 World Fair! Paris must have been the centre of the world.

What was the book named for - did Vermeer wear a distinct hat?

I am assuming that Office and Laughing Girl showed a special large hat that is, in addition, used to describe trade between North America and Europe. The beaver fur may or may not have belonged to Vermeer himself.