Isfahan & the Silk Route - architecture, trade and the Europe-China link

China’s old cities were thriving commercial centres, especially in silk production. In the later C13th, during the rule of Kublai Khan, China’s silk industry reached a great level of soph­is­tication. The guilds had established meticulous pay scales, working hours and a pricing system for silk.

Silk reached the markets, in Persia and further west, via the long “Silk Road”. The road stretched from the western gates of Hsian in China's Chanxi Province, and passed via the southern Gobi Desert until western Turkistan. It then passed via Kashghar to the major trading cities of Samar­kand, Bukhara and Merv. Once the Silk Road crossed the length of Persia/Iran, it divided into two branches; one went tow­ard Azar­baijan, and the other ran through Ham­adan, Baghdad or Mosul, Antioch or Capadoccia, Izmir and Istanbul. 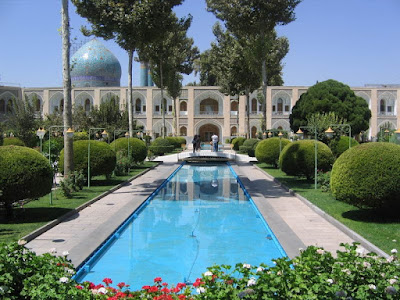 East-West economic exchanges required big warehouses in the trading cities, linked by camel caravans. Businessmen travelling along the road usually spoke Chinese, Persian, Turkish or Arabic, depending on which city they conducted their business. Realising the economic signif­icance of the Silk Road, most countries that were NOT on this road coveted the prosperity that the route could bring. Trade usually became specialised e.g for the route that started in Babylon and passed through Baghdad and Hamadân, the main products were lapis lazuli, horses and camels.

Iran Chamber Society showed how the Silk Road was of special import­ance. The road connected old centres of Persian civilis­at­ion, from Bam in the SE corner via Ishfahan and Teheran, to Tabriz in the NW corner. There were customs offices along Persia's border with other countries, registering all goods imp­ort­ed into, or exported from the country. Thus this nat­ion, located between China and Europe, played a key role in con­nect­ing cultures i.e in the movement of religions, archit­ecture and economies.

After crossing the Pakistani border into southern Persia, the first city was Bam (pop 90,000). Bam occupied a very important commercial place in the region, fam­ed for its textiles and clothes. Bam served as a major car­avanserai on the Silk Route, where trad­ers from China and the East brought exotic merchandise like silk, lacquer-ware, precious stones, ivory and spices. They in turn traded wools, leather, metal ware, perfumes and gold from the West. 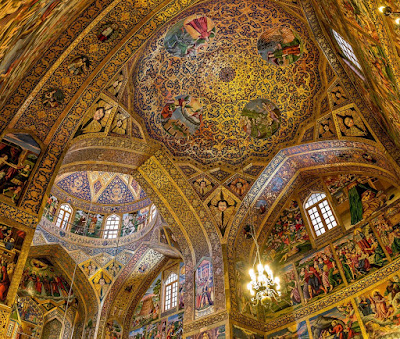 Walk along the 12m high Bam ramparts and 38 towers surrounding the large number of houses and the seat of the governor. At the top of the citadel, there was a watch tower and pavilion that provided panoramic views from this oasis town over the endless de­sert. When the old city fell to Afghan forces in 1719, the economy never fully recovered and was largely abandoned. Later the city benefited from tourism, at least until in 2003 when most of Bam was devastat­ed by an earthquake.

Now Isfahan. Kim Sexton noted that Isfahan, a major city (pop 1.5m) in central Persia, was the splendid capital of the Seljuq and Safavid dynasties. Their legacies est­ab­lished Persia as the cultural heart of the eastern Islamic world in terms of language, art and architecture. World travellers called beautiful Isfahan: “Half the World”.

The Safavids (1501-1722) were the first rulers to lay a foundation for a national identity. They established Shiite Islam as the state religion and strengthened the state economy. Com­merce was so imp­ort­ant to the Safavid polity that its ruler, Shah Abbas I (r1588-1629) focused on the Silk Road in order that his empire would enjoy a trading monop­oly. Tolerant Is­fah­an was attract­ing merchants, miss­ion­aries and merc­en­aries. 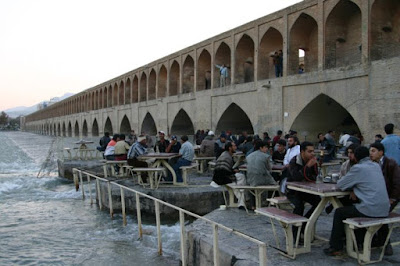 Isfahan was ex­p­eriencing huge growth, including the building of mos­ques and palaces, all built around the centrally located, HUGE Naqsh-e-Jahan/Imam Square. Shah Abbas I built Sheikh Lot­follah Mosque and ded­ic­at­ed it to his father-in-law, a Sheikh. Lotfollah Mosque has no minaret or courtyard, since it was not a place for public wor­ship; it was for a King and his court.

Isfahan’s Bazaar was a long vaulted street, linking the old city with the new. Star-shaped openings allowed shafts of light to brighten the trade below. The bazaar sold carpets, kilims, spices, books, gold and jewellery, printed textiles and an Isfahan spec­ialty, miniat­ure paintings on camel bones. Once durable silk car­pets started being produced in Persia, China lost its monop­oly in Safavid Tabriz and Isfahan.

The central Imam Mosque, a fine building to the south of Imam Square, was completely covered in Isfahan's own pale blue tiles. Built in the reign of Shah Abbas, it had 48 ms high minarets. It was close to the carav­anserai and baths.

There were 100+ caravanserais in the bazaar of Isfahan after the Saf­avid era, so I will recommend two. The Caravanserai of Shah Ab­bas, now called the Abbasi Hot­el, can still be viewed from the court-yard. Guest rooms were or­ig­inally built around the courtyard and the stables were located behind them with their doors in the corners of the yard. The iwan was a rectangular and vaulted hall, décor­ated with calligraphy, glazed tilework and geometric designs. Spacious rooms on the ground floor facilitated the storage and transfer of goods from both East and West.

Isfahan’s Shah Madar Caravanserai was another outstanding Safavid build­ing. This important, royal-ish monument was related to the late mon­archy of Second Shah Abbas. It has since been expensively renovated. 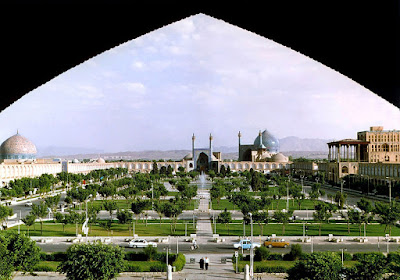 Chehel Sotun Museum & Palace was a super C17th pavilion and vast garden. The building had a veranda with 18 pillars and a large pool in front of it. Being mirr­ored in the still water of the pool, the pillars created a beautiful view. Safavid Ali Qapu Palace 1597 was used for the reception of the amb­ass­adors and envoys from other nat­ions. This 6-storeyed palace had impressive plaster-work and artwork.

Located in Isfahan’s Armenian quarter, Vank Cathedral 1606-55 was built for Shah Abbas I and the strong Christian community. As shown in the photo Vank had many stunning wall paintings,  gilded carvings and religious tab­l­eaux eg the Last Supper and Christ's Arrest, most of which had been brought by Armenian businessmen from Europe. They built a museum near this church, to hold manuscripts.

Note the 33 arches of the Si-o-Seh Pol Bridge (1599–1602), the most famous example of Safavid bridge design. Beneath used to be a tea house, normally only open for men. 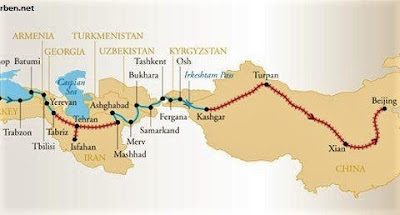 I remember Marco Polo's travels and writings in Isfahan. He was a valuable historic figure, back in the day.

For a traveller who was famous for his travels in, and learning about China, Marco Polo was indeed a major source of our information on Persia. He visited Isfahan in 1330-2.

He described and admired Isfahan's fire temples, Persian horses, markets palaces, mosques and towers with honeycomb interiors. Anything in this beautiful city that grabbed his eager attention!

Hello Hels, The Silk Road was indeed responsible for huge fortunes and dazzling monuments. America has had similar routes that have left behind traces of their former glory, including the canal routes, the iron-processing routes (whose legacy is now called the "Rust Belt") and so forth. Unfortunately, people have forgotten how important some of these now-ignored cities and routes once were.
--Jim

as much as rust belt is an awful expression, I know exactly what you mean. Being on a trade route could bring great success to a city, but equally the city could disappear without a trace, once the trade stopped.

For example, there were silk road cities in the Taklamakan Desert in NW China that died because of sudden drought, local wars, vast sand movements or distant political decisions to close down a particular trade route in favour of another. All you can see now are the walls, roads, temples, palaces, markets and tombs.

It is fascinating how trading along the silk road built up fortunes along the route.

imagine the excitement when the exotic goods arrived in any town along the silk road.
1. The Chinese loved Europe's wool and flax processing, carpets and weaving
2. Camels and top quality glass went from Central Asia to China.
2. Europeans paupered themselves buying silks, porcelain, paper and tea from China
3. Northern Europeans traded their furs and skins

oh wouldn't time travel be wonderful thing? I would love to go back to those days as long as I could leave if I was in danger or getting ill !!! I A friend Of mine went to Iran some time ago when it was under the Shah and marveled at the beauty of Isfahan in particular . Was it in Bam the the Buddahs existed ?

Once Isfahan became the capital of Persia, it was known as Half The World. The city was so beautiful that even outsiders had never seen such special religious, mercantile and public architecture before. I too would love to go on one of the semi luxury trains (eg Golden Eagle) that travel along the old silk routes.

Hi Hels - what a brilliant write up for us ... you give us such detail and information ... making me wish I'd been able to see the area ... I know you're here ... so at some stage can come back and read through again - cheers Hilary

it is strange that we can be very well travelled and still not have visited some of the most interesting places on the planet. I have spent time in Eastern China, Northern India, and Turkey and the Middle East, but never to the fascinating places in between. My bucket list would include the Caucasus, Uzbekistan, Kyrgyzstan, Tajikistan and, if safe, Iran.