Thelma Komesaroff (1923-2015) was a student at University High, a selective school in Melbourne that encouraged its students to stay at school, even throughout the Great Depression and the 1939-45 World War. At a time when most girls and some boys were encouraged to leave school at the minimum legal age, Thelma finished Matricul­ation and was offered a place in the prestigious University of Melbourne. Her passion was English and Russian Literature. 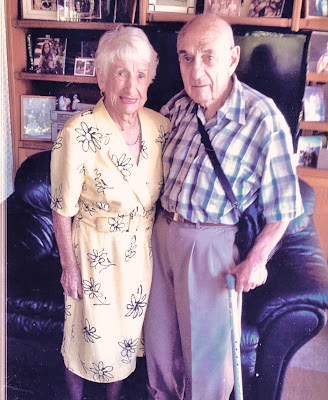 The University did not close during the war, but students whose husbands, fiancés and fathers were recruited into the Armed Serv­ic­es felt obligated to get paying jobs. Thelma married Lieutenant Les Webb­erley (1922-2015) in 1945; she continued working in a city bookshop when Les returned to University after demobilisation, to finish his engine­er­ing deg­ree.

Once their babies were out of napp­ies, Thelma bec­ame a journalist at The Australian Jewish Herald, pub­lished weekly in Melbourne. After 18 years of columns on music, the arts, travel and community organisations, Thelma took the opport­un­ity to go back to Melbourne University, this time to earn a deg­ree in Journalism. And this time with her daughter (me) on the same campus!

I have already documented Thelma’s community work. Courage to Care offered workshops, presentations, exhibition viewing and facil­it­at­ed discussions designed for high school students. And one section of Bnai Brith Victoria provided scholarships for teach­ers to travel to Israel and to learn in in-depth teaching programmes.

But I have not discussed the rest of Thelma's professional career, intended to be spent as a journalist in tertiary educational institutions.  Only one mid-career move was a surprise, still as a journalist but not in a tertiary educational institution. Thelma was given 3 years to write a history of the Victorian Chamber of Manu­fact­urers in Melbourne, starting in the 1870s in Melbourne. In August 1881 it became the Victorian Chamber of Manufacturers/VCM. It remained an unincorpor­ated association until 1922, when it was incorporated under the Victorian Companies Act. VCM played a role in Australian industrial relations and within a couple of years the Australian Chamber of Manufactur­ers formed the Manufacturing Grocers' Section.


The VCM wanted a book that could be published in time for the cent­ury anniversary of the organisation. The final version of the book ENTERPRISE, 100 Years of the VCM was written by Thelma Webberley, edited by CF Sullivan and published in 1979. 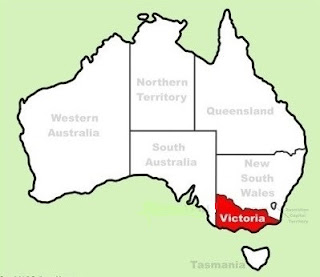 The Victorian Chamber of Manufacturers
across the state of Victoria

Book Orphanage says the book is a hard­cover, 10½" x 7½", with dark-blue cloth-bound boards with gold title to spine, 218 pages, photo­graphs and a foreword by the Premier of Victoria. This book traces the first century of the VCM, which started in one hotel room and, at the time of writing, had 6,000 members and wide influence in industrial matters in Victoria.

Now to the book launch itself. Printed sheets were added inside the book saying Many people contributed to the preparation of this history of the first 100 years of The Victorian Chamber of Manu­factures. Among the members of VCM staff who cont­rib­­ut­ed to the production of the History, were Mr CF Sullivan and Mrs T Webberley. Mr Sullivan was resp­onsible for guiding the com­pilation of the material included in this work while Mrs Webb­erley, in writing the text, did so with great enthusiasm and dedication.

The Foreword was written by the Premier of Victoria, the Honourable RJ Hamer. I was particularly interested to hear the premier say inter alia that the Chamber was interested in technical education, being part of the Administrative Staff College, Council of Public Education, Council of Melbourne University and its Faculty of Economics and Commerce, Victorian Institute of Secondary Education, Victorian University and Schools Education Board.

There are 17 chapters in the book, covering the era of the first men with the first visions (eg Robert Harper, the Chamb­er’s first president) until the completion of the Chamber’s an­n­iversary and its plans for the future. My personal favour­ites were the chapters set in the post-war years and the 1950s, discus­s­ing the Prime Min­is­t­er, The Right Honourable Mr Chifley, socialism, unions and indust­rial­isation. This was a very influential era for my family, and for the primary schools we all went to.

After the formal speeches in front of Victoria’s dignitaries at the book launch, Thelma Webberley gave the best speech of her profess­ional career. And no time before or since had she ever had three State Ministers shaken her hand on one day!

A separate letter to Thelma Webberley was written directly from Brian Powell, Director of the VCM. Mr Powell’s inv­it­ation to the function on 2nd May 1980 was to thank Thelma in front of the VCM staff, for her writing of the book. That function would mark the internal release of the VCM history “Enterprise”.

The books, printed sheets acknowledging the authorship and editor­ship, and the Director’s personal invitation to Thelma all came to me in my late mother’s library. They are treasured items. Plus I was delighted to find a Victorian Chamber of Manuf­acturers’ Certificate of Membership at the National Wool Museum in Geelong. 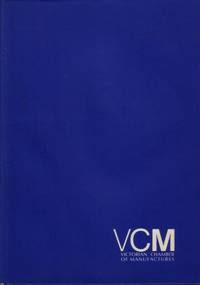 ENTERPRISE, 100 Years of the VCM 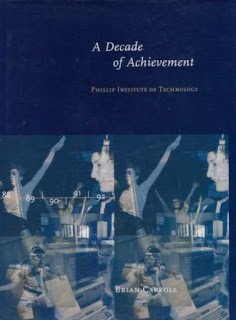 A Decade of Achievement: Phillip Ins­tit­ute of Tech­nol­ogy

As I said, Thelma intended to spent the rest of her career as a journalist in tertiary education. And she did! Phillip Institute offered Arts, Commerce, Business, Engineering, Social Work and Youth Work. Readers can enjoy Thelma’s career at PIT in Brian Car­r­oll’s A Decade of Achievement: Phillip Ins­tit­ute of Tech­nol­ogy. Starting his history in 1982, Carroll documented the important contributions made by Thelma's closest colleagues Professor Don Edgar, Betty Churcher (Head of the School of Art and Design) and Henry Talbot (Senior Lecturer in Photography). Carroll highlighted the quarterly magazine Upfront that was written by Thelma, the means by which the Institute reached out to the local community and northern suburban newspapers.

Later Thelma worked with students and wrote journal artic­l­es, books and newspaper columns at Royal Melbourne Institute of Technol­ogy (now RMIT University). In preparation for RMIT's School of Media and Communication to be developed within the College of Design and Social Context, the journalists and publishers had to work very hard. The School event­ually hosted advertising, audio-visual, communic­ation, creative writing, editing and publishing, film and television, journalism, music industry, photography and public relations.

Thanks for letting me know about the article Helen. Blogs are not part of my world experience. Some journalists write so densely you have to read each line twice. Thelma's Upfront Magazine was a pleasure to read. Greg

It is hard to believe it is three years since your mother died. She was certainly a high achiever and you have right to be very proud of her. Enterprise seems like a curious book for her to write, but I suppose a good author I can write about subject.

I was very surprised to see the blue Enterprise book at your place this week. I also worked at VCM in the 1970s but found it not very supportive of its female employees. Your mother was brave. M

Hello Hels, I have been looking forward to reading more about your mother and her career since your last post on her. It is clear where you get your research ability and searching questions from. Writing about education is as important a subject as writing about the individual branches of education.
--Jim

Thelma's happiest and most productive years were at Phillip Institute of Technology (now part of RMIT University) and Royal Melbourne Institute of Technology (now RMIT Uni). She was surrounded by brilliant academic minds, enthusiastic students and receptive local communities. Plus she was writing about her passions: education, the performing arts, music, community organisations etc, not about economics.

you are quite right. The VCM actively recruited Thelma to collate the organisation's history, because she was an excellent writer and was very well connected in the journalist world. But she was never supportive of conservative politics and even at university, found the study of Economics to be hard work.

Until this last week, I had no idea that you had ever worked at the VCM. Of course women were not treated equally back then... I was not even able to receive superannuation because married women were to be financially dependent on their husbands :( But you had an extra disadvantage - secretarial staff were not considered middle level professionals.

Writing about education was even MORE important a subject back then, yes! Victoria only had one university until the mid 1960s. Technical education had always been available for working class families, but there was no plan to extend technical educational institutions or to raise their status to equal that of universities.

Only the later establishment of the Technical and Further Education Commission and the provision of Commonwealth funding created the biggest and most successful effect on technical education in all States.

From my years at Sydney Boys High, I know what a gift selective high schools were to academically ambitious students. Even more so for girls, and even more so during the Depression decade.

University High had the extra advantage of being next to Melbourne Uni... it was a fantastic environment for clever students. Of the limited number of girls who did Matriculation in 1941, every one went on to a significant career in the professions or arts.

Just to show how creative my mother's literary and musical genes were, I hereby draw your attention to three of her first cousins who have starred in Australian cultural history:

Hi Hels - how very interesting ... and gosh she must have been an amazing woman - let alone mother ... no wonder you're so erudite ... I must check out more of your posts on her - thanks for letting us know - cheers Hilary

Unless our parents were Supreme Court judges, most generations would assume they were more educated and more successful than the generations that came before. We live longer than they did, our teeth are straighter, our clothes are smarter and our jobs are better paid. But the reality is, for many of us, that our parents survived WW2, learned a new language, rebuilt important careers AND raised quality families.

I went to a literary event last week that launched a history book written by my mother's cousin. His images, his access to once-secret Australian Security Intelligence Organisation | records and his analyses in text were top notch.