Can a great book be made into a very good film? On Chesil Beach

I had good reasons for seeing the 2017 film On Chesil Beach. Firstly Ian McEwan is one of the most intriguing modern novelists I have read, espec­ial­ly his 2007 novella of the same name! Secondly the brilliant film Atone­ment was based on Ian McEwan's 2001 novella Atonement and starred, amongst others, Keira Knightley and Saoirse Ronan. Thirdly Chesil Beach was set in 1962, a fascinating time that came just before my personal “Golden Era” of 1965-1970. Finally the book was quite rightly shortlisted for the Booker Prize in 2007, my best guide for selecting novels to read every year.

Author McEwan did the screenplay adaptation, and the film was dir­ected by Dominic Cooke.

The newlywed stars on their honeymoon were both anxious virgins. The new wife was Florence Ponting, a talented and ambitious viol­inist, and the new husband was Edward Mayhew. I remember my grand mother talking about the dangers of sex before marriage, but who discussed the terror of sexual intimacy after marriage? 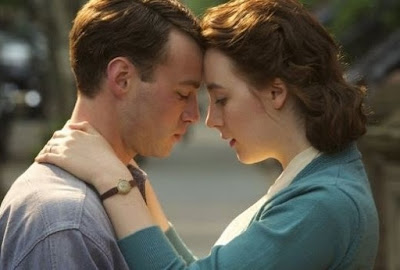 I assumed “Chesil Beach” was a fanciful location for the film's honeymoon hotel .. because I had never heard the name outside McEwan's novel. Now it turns out that the 18 miles of protected pebble beach along the Dorset coast is real. And famous! What an appropriate and moody location for a brief marriage that ended after a night of disast­rous non-sex. Florence and Edward Mayhew, who came from dif­f­erent backgrounds, had an idyllic courtship. But they never got to consum­mate their marriage, breaking up in tears before doing the deed.

Saoirse Ronan (born 1994) was an inspired Florence, daughter of a wealthy but icy cold family. The Irish act­ress knew how to express an innocence and repress­ion, while rem­aining outwardly charming. The actress herself expl­ained that she had been too young to read McEwan’s book when it had first been released. She was also too young to deal with this very intimate topic and acknowledged that it had to be told in a delic­ate way. Perhaps Ronan didn’t even know about the societal pressure that could accompany physical intimacy back in 1962.

Theatre actor Billy Howle (born 1989) played a character whose work­ing class father was a teacher, while his mother was damaged in an accident; their home was more informal and closer to nature than Florence’s posher background. Edward was a recent university grad­uate (in history) and had decided to become an author. 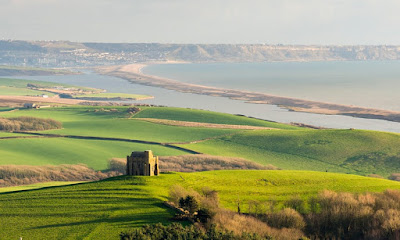 Looking down from Abbotsbury Hill onto Chesil Beach, Dorset
Photo credit: The Guardian

Transmission gives a synopsis with extra information that I could not have elucidated myself.  It was a gripping, heart-rending account of a loving relationship battered by outside forces and influences first formed in child­hood, in a society with inflexible rules about uniformity & respectability. They married as virgins: two very different people, but deeply in love. Only hours after their wedding they found themselves at their dull, formal honeymoon hotel on the Dor­set coast at Chesil Beach. They dined in their room, and their conversation became stilted and nervous.

The consummation of their marriage was fast approaching, and while Edward welcomed the prosp­ect of sexual intimacy, Florence was scared by it. The tension between them boiled over into a heated argument as Florence tried to repel Edward’s advances. She dashed from the room, out of the hotel and on to Chesil Beach, with Edward in pursuit. On a remote part of the beach they had a blazing argument about the profound differences between them. One of them made a startling decision that would have life-long consequences for them both.

As often happened in the film world, it took a long time for the book to make the transition to the big screen. Yet producer Elizabeth Karlsen had been interested in a film adaptation of the beaut­ifully written novel, even before the On Chesil Beach book was first published.

She noted the simplicity of narrative and the clarity of emot­ion that was already visible. Finding Dominic Cooke, one of Britain’s most eminent theatre directors, Artistic Director at the Royal Court and Associate Director at the National Theatre, was inspired. Cooke was impressed by how the film conveyed the importance of how people talk, or don’t talk about sex, and how people are affected by their upbringings. 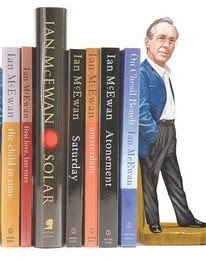 Ian McEwan and some of his most famous novels,
Wall St Journal

In 2008, after weeks of concentrating on the task at hand, I created a list of my most loved novels. If I was asked to re-create a favourite list a decade later, it probably would not be very different. But I would certainly have included an Ian McEwan novel or two.

And yes, great books can be made into very good films!

Without suggesting that some men are a bit insensitive, is there a chance that women will appreciate the book/film more than men?

good question. I read "7 Romantic Films Men Love" in Huffpost and was semi depressed about the findings. But perhaps you have a point. James Lingerfelt said that that common threads of a romantic movie a man will watch: The screenplay is written by men, the film is told from the man’s perspective and the male lead behaves like a man would in real life and the ending of the film is redemptive. The male lead learns a valuable lesson from the experience.

His examples included Four Weddings and a Funeral, Casablanca, Love Actually and Notting Hill, all films I enjoyed. But for very different reasons from those Lingerfelt suggested.

Hello Hels, I recall that Rosemary's blog Where Five Valleys Meet once featured Chesil Beach with some beautiful photos of the pebbles:
https://wherefivevalleysmeet.blogspot.com/2015/10/the-jurassic-coast.html

About "intimacy after marriage": as I understand it , the standard advice is "close your eyes and think of England."
--Jim

I was not familiar with the Where Five Valleys Meet blog, but I found the line: "All of the places visited in this post have either a literary, film, TV or historical interest." What more could a blogger have asked for :) Great photos, as well.

I like the sound of the movie. Such heaviness was placed on the night of the marriage, with a suffering of pent up desire and probably then disappointment, more certainly for the woman, than for men, although it was probably all over very quickly for men. Less common, consummation may have been lustful and successful for both. Quite thought provoking.

It is not bad thing that the majority of couples now have sex before they marry, if they do marry anyway.

agreed. There are so many potential differences between humans that I too think that potential partners should test it all out _before_ marriage. Sex of course, but also discussions on political values, religious beliefs, ideas about child rearing, gender allocation of household tasks, expectations about dealing with in-laws etc etc.

I wouldn't not have fainted at the first sight of a male dick, but if the husband-to-be voted Conservative, I would have run away faster than Florence Ponting :)

What should have been a momentous occasion was weighed down by expectation. And what stood in the young lovers' way? Their personalities and their pasts, their ignorance and fear, timidity, squeamishness, lack of experience, then the tail end of a religious prohibition, their Englishness and class, and history itself. Nothing much at all.

nod ... a perfectly sensible list of factors that stood in between the two spouses. But they were not abnormal, untalented or particularly problematic young adults.. they were both in love and both had career ambitions to fulfil.

Thus my sense of grief at the end.

On Chesil Beach is a GREAT novel. No doubt about it! I don't think a film should be judged against a book - they are different entities. I believe that a film should be a good film first and true to the source secondly.
Incidentally Chesil Beach is a part of The Jurassic Coast, a World Heritage Site on the English South Coast. Apparently one can pick up fossils off the ground there - but I have never seen them!
CLICK HERE for Bazza’s capricious Blog ‘To Discover Ice’

if you read a book and love it, you are in charge of all decisions in your mind - the characters' faces, clothes, accents, relationships etc. The author sets the scene with the location and the events, but the rest is up to the reader.

If you read a book and love it, then see the film taken from the book, you may be bitterly disappointed. The director, costume designers, language coaches, set designers etc may have made decisions that were totally different from your understanding of the book.

Normally I would much rather see a film from a book I did NOT read and love.