Bruges (pop 120,000) was founded in the north of Belgium in the C9th by Vikings who settled locally. A town developed around the fort­ress that the Counts of Flanders built in the area and the young settle­ment worked hard to acquire city rights. In fact a very prot­ective city wall was built around Bruges, with solid gates.

The settle­ment very quickly became an imp­or­tant har­bour close to the North Sea. Inside the city, the river and canals became the vital communic­ation links. By the C14th Bruges was the starting point of a commercial transport road to the Rhineland; traders from all over came to sell their pro­ducts and to buy Flemish cloth. 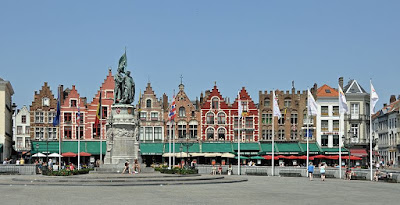 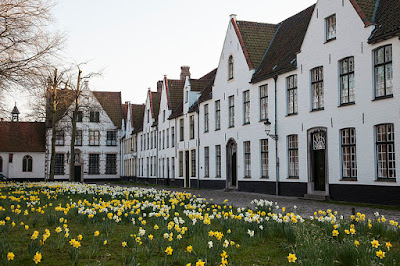 
Growing from a few North German towns in the late 1100s, the Ger­man Hans­eatic League dominated Baltic maritime trade for three cent­ur­ies along the Northern European coast. Bruges bec­ame a port of even greater importance when it joined the Hanseatic League.

St Saviour’s Church was founded in C10th and added to later eg the high alt­ar is C17th. Serious fires may have been the result of wars, accidents or iconoclastic de­struct­ion. But some lovel­y part of this church still stand: C15th choir stalls with the Knights of the Golden Fleece’s arms, or­g­an, clois­ters and treasury.

The Beguinage was founded by Margaret of Constantinople, countess of Fl­an­ders in the mid C13th. Some women were the bereft widows or daughters of knights killed in the Holy Crusades, women who did not want to be secluded nuns but who wanted to do good works. The Beguinage is still a green space and lovely white­washed hous­es; the Beguine Museum enables visitors to feel the C13th.

Markt Place is a central, large square used for all social and political act­iv­it­ies. On one side, the med­ieval bel­fry looms 272' over Markt Place, the proud symbol of the wealth of Bruges since 1282. And there were renovations added during C15th glory days. Inside the belfry, see the trea­s­­ury room; then up 366 steps, past the C18th car­il­l­­on and onto the roof. The 47 bells chime each day.

On the east side of the square is the neo-Gothic Provincial Palace. From 1850, it was used to house the provin­cial govern­ment meetings. Then it became a government meet­ing hall and now a ceremonial building-exhibition space.

The Basilica of the Holy Blood (mid C12th) was built on the site that the First Count of Flan­d­ers built his fort. It did­n't become a chapel until the bones of St Basil the Great AND Holy Blood of Jesus Christ were brought from the Holy Land or Constant­inople (C12th). The ground floor of this double church has its original darkish Romanesque character, while the upper chapel is a totally Gothic storey built in the C15th.


The relic of the Holy Blood is always in the upper chapel, in a tiny cryst­al phial with a golden stopper hung with silver chains. Only on May’s Ascension Day does it move around the town in proud process­ion. The re­l­ic is the respon­s­ib­il­ities of the Con­frat­­ernity of the Precious Blood, town worth­ies celebrated in Pieter Pourbus’ Triptych of the Broth­erhood.

Joined to the Holy Blood Basilica is the old Town Hall. It was built from light cream sand­stone in the Gothic style in the late C14th. The facade has octagonal tur­rets, arched and ribbed windows, and statues of all the counts of Flanders. The Gothic Hall above has stunning mur­als depicting the major events in Brug­es’ history. 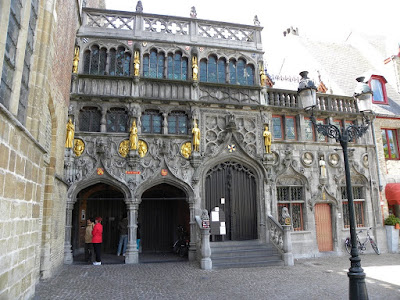 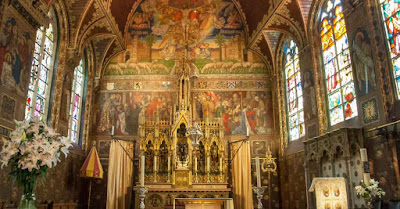 Basilica of the Holy Blood, exterior (top) and
Gothic upper chapel with blood relic (below)

Next door is the more cl­ass­ic­al Palace of Justice. Except for the Magistrates’ Hall, the first building was destroy­ed. The Palace was rebuilt in the 1528-81 per­iod. Other buildings in Burg Square are the Prov­ost's House and the Old Recorder's House, a fine renais­s­ance building topped with statues repres­ent­ing justice.

And see the Church of Notre Dame. Work began on the nave and aisles in c1230 but, typically, more changes were made in the 14th and C15th. The huge tower is 122ms high! Inside Notre Dame Ch­urch is Michelangelo's only known scul­p­tural piece in Belgium, Virgin and Child 1504 in marble. It was brought from Tuscany by a Flemish merchant.

Opposite Our Lady Church is St John’s Hospital, founded in 1188 and one of the oldest in Europe. It still funct­ions as a hospital tod­ay, but a dispensar­y and an old ward have been fitted out as they were back then. In one of the hosp­ital’s old chapels the Hans Mem­ling Museum is located. This artist spent most of his career in Bruges.

Among the amazing coll­ection of Mem­ling paint­ings to be found in Bruges is the altar­piece called The Mys­tic Marriage of St Cath­erine 1479, painted for the Hospi­tal of St John chapel, as was the Mad­onna and Child 1487 and the Hospitallers of St John. The wood­en Rel­iqu­ary of St Urs­ula 1489 is a portable Gothic shrine to Ursula’s 11,000 martyred virgins, covered with exquisite panels. 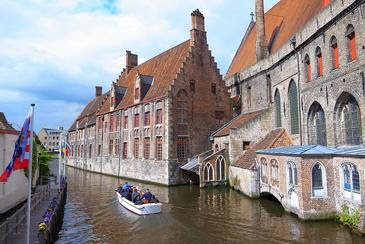 St John's Hospital and Memling Museum along one of the canals 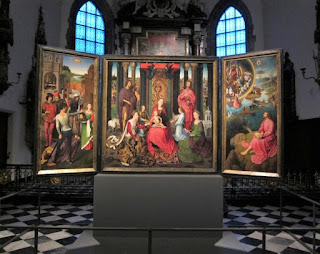 
The decline of Bruges' wealth started in C15th: terrible silt­ing up of the Zwin meant that ships could no longer transport goods to and from Bruges. Plus competition with the bigger harbour of Antwerp resulted in less comm­ercial act­iv­ity. Sadly the coun­try's wealth­iest merchants left Br­ug­es and took their business to An­twerp. The only building flourish were houses and ware­houses with step­ped gables that were built along the canals throughout the C17th.

Today this economic failure to thrive has had an ir­on­ic effect. Bruges was snap-frozen in time and is the best preserved medieval city in western Europe. Even the solid medieval town walls were only torn down in the mid C19th.

The C20th has brought new life because tourists love the medieval heritage, and chocolate. The new harbour of Zeebrugge, 16ks from the city, also brought new industries. Bruges is also home to many interesting art galleries eg The Absolute Art Gallery which promotes the artwork of young and talented Belgian artists, and of international artists - paintings, sculptures, installations and photographs. But the greatest modern fame came from the film, In Bruges (2008), that starred two Irish hit­men, filmed across the city’s iconic cityscape.

I only recently learnt about Bruges and I now know a lot more. I liken the preservation of Bruges to perseveration of some our country towns, where economic decline the the latter C20th led to the preservation of buildings, which went on to be part of revitalisation of such towns.

since the centre of Old Bruges looks beautiful and intact, there are only a few WW2 possibilities:
a] Bruges was never bombed, by the Germans or by the British;
b] Bruges was indeed bombed, but the German Commander Immo Hopman refused to carry out orders from his superiors to bomb the gorgeous medieval centre; or
c] Bruges was bombed somewhat, but it was returned to its original condition in the post war years.

I have read in very different histories that the most damage was done in Wallonia. The beautiful Flemish towns like Bruges, Antwerp and Ghent were lucky not to be devastated by WW2.

Helen most films could be made on a Hollywood set, the locations are so poorly done. But in the film In Bruges, the interiors and exteriors are fair dinkum. I had been there before the film, and now plan to visit again.

Hello Hels, You shouldn't have mentioned those 19th-century destroyed Medieval walls--those are what I will miss most if I am ever lucky enough to get to Bruges. Taipei's old city walls are all gone (razed in the early 20th century), but several of the original gates are left, mostly in convenient to get to spots.
--Jim

Bruges is a beautiful city and so compact to get around on foot.

We Travel and Cherry

It felt as if the city buildings were an intimate and accurate part of the story being told. No wonder tourists are flocking to Bruges now.

I remember saying something very similar in lectures on the modernization of Vienna. The Ringstrasse is a circular grand boulevard around the historic Innere Stadt, on the very site where medieval fortifications had been. The walls were destroyed in the mid-19th century, joyously celebrated with kingly speeches and brass bands.

the destruction of medieval walls almost became a powerful symbolic gesture, ending the limitations of a geographical and historical past while opening up to growth and modernisation. Yet the losses are almost never acknowledged.

Look at the Krakow example (http://www.krakow-info.com/mury.htm). The city walls were 10 ms high and 2.5 ms thick, with additional lower walls next to them. Surrounded by a deep, wide moat. So Krakow pulled down its stunning fortifications. Only the main city gate survived together, some adjacent towers, some walls, the 16th-century city arsenal, and a giant barbican. The rest of history ended up on in a rubbish heap :(

Hi Hels - when I return I'd love to get to Bruges ... before I have to go through passport control ... I wonder if I'll make it: it's a stunning place and too Ghent - cheers Hilary