Little Tich - best comedic performer in the world, from 1884 on!

Harry Relph (1867-1928) was the 16th child of a very elderly Kent pub­lican. Harry stood only 4’6” high, with dwarfish legs, and was born with six digits on each hand and foot. His deformities were emphasised for public­ity, although he never wanted to be seen as a handicapped person.

His earliest prof­essional perform­ance in 1880 was at a the Rosherville Gardens Gravesend, a favourite riverside resort. The 12 year old lad made his very first stage appearance with his own black-face comedy act.

Harry took his stage name from an infamous English court case against The Tichborne Claimant that lasted from Ap 1873-Feb 1874, when Harry was still a toddler. In this court case, a Wapping butcher’s son called Arthur Orton turned up from Wagga Wagga in rural Australia. He pretended he was Roger Charles Tit­ch­borne, lost at sea in Ap 1854, and heir to an ancient Hamp­shire baronetcy. Orton, who weighed 25 stones, did 14 years in gaol. He was re­leased on ticket-of-leave in 1884, and later appeared on the music halls, telling of his adventures and prison experience.

Dwarfish Harry Relph took his stage name in an ironic and comedic refer­ence to the huge Tichborne claimant. 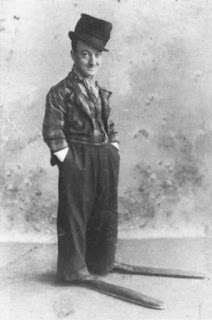 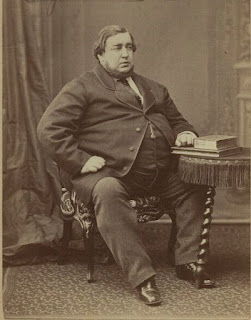 By the time of his solo London music hall debut in 1884 at 13, Harry had developed a special­ity dance in which he “defied” gravity, either leaning for­ward at a precarious angle or balancing on the tips of long shoes. This eccentric dance became his spec­ial­ty. In his famous flopping Big Boots, 30” in length, Tich danced, leant almost horizontal to retrieve his lost hat, and then rose on tiptoe to become over 7’ tall. Finally he took his bow with another quick horizontal lurch which knocked his bald forehead against the stage.

In Drury Lane, his next London home, pantomime audiences loved Little Tich in the 1891 Humpty Dumpty performance with Dan Leno and Marie Lloyd. Then in 1892 with Hop on My Thumb. Three Drury Lane pantomimes, 1891-94, established him as one of Britain's foremost comedians. To see Harry walk on stage, with his burlesque evening dress, top hat, cigar and his silly smile, made people quickly laugh.

Tich’s music hall earnings made him rich. He loved to ride in a big car around London, and into Kent. But he never forgot his Kentish childhood, his early struggles as a poorly paid performer or his nights in a doss-house.

After succeeding in London, Little Tich went on to triumph over­seas. In 1896 Little Tich made his debut in Paris and became a good friend of very short Toulouse-Lautrec. He was also greatly admired by famous actor-manager Lucien Guitry and his actor-dramatist son Sacha. The young Charlie Chap­l­in, in Paris with Fred Karno's Troupe, saw Tich at the Folies Ber­gère and based his walk on the music hall star  (even though Chaplin became the more famous man).

Also in 1896 Tich app­eared at the Alhambra Theatre London and the Olympia Music Hall in Paris.

Little Tich sang comic songs & was a skilful instrumentalist, but his greatest successes were energetic dances in which he often par­odied artists like Loïe Fuller. Soon Tich was made an officer of the Académie Française for services to French music-hall.

1905’s biggest star on the Australian Tivoli Circuit was Little Tich. This comic little showman commanded a salary that was double the largest sum theatre proprietor Henry Rickards had ever paid to previous stars!!

For 17 years the performer was the toast of the old Tivoli Theatre in Lond­on’s Strand. In an unforgettable show in 1907 Tich was one of the Five Harrys: along with Harrys Laud­er, Tate, Frag­son and Randell. The show was bill­ed as a sensational success.

He was enticed by an American prod­ucer to the USA at 3 times his British salary. Phineas T Barnum was a great show man. There Tich developed a series of hilarious sketches of suburban charact­ers: a love-sick tram conductor, sea-sick sailor, incompetent black­smith and a succession of ecc­entric elderly ladies. He was most famous for his Spanish Senorita, Tax Collector, the Gas Inspector and Little Miss Turpentine.

Famous at home and abroad, his highly vis­ual comic rout­ines inf­luen­ced both stage and early film per­formers. Victorian Cinema reported that the surviving film of the Big Boots dance, made by Clément-Maurice for the Phono-Cinéma-Théâtre in 1900, was a piece of comedic genius. And fans could see Georges Méliès' Le Raid Paris - Monte-Carlo en Deux Heures (1905), Pathé's Little Tich (1907) and Gaumont's Little Tich, the Tec (1909).

Back in Australia Tich told the audience that he was used to play­ing to ladies and gentlemen, not to a mob of hooligans. Then he walked off. After the afternoon papers’ headlines screamed, ‘Little Tich Insults Australian Audiences’, Tich had misgivings about what sort of reception he would get in later perform­ances. But Little Tich was 60 and his big boots and silly songs were no longer univ­er­sally loved. Australians broke his heart. He had come on the stage cocky and energetic; he left it a shaky old man. Tich returned to London but his spirit was never the same again.

Relph was married to three professional entertainers; a] English dancer Laurie Brooks in 1889, b] Spanish dancer Julia Recio in 1898 and c] act­ress Winifred Ivey in 1926. Harry and Winifred’s daughter Mary went on to have a successful stage career of her own. 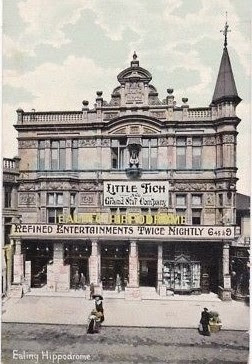 His final performance was at the London Alhambra Theatre in 1927, then he died in 1928. Buried in East Finchley Cemetery, Little Tich’s tomb­stone says: le plus petit et le plus grand comique du monde.

See the V&A Theatre and Performance Department collections, including the biographical, productions and photographs files, the library holdings, the Richard Findlater Archive and a pair of the famous Big Boots. Read Little Tich, Giant of the Music Hall by Mary Tich and Richard Findlater, 1979 and Little Tich – Music Hall Star by Gordon Irving.

Absolutely fascinating, and obviously well-researched. I found it a little sad, of course. But also, I got from your writing the vibrancy - and short-lived nature - of it all - an act, trying to make it - so much went into it; and, now, who has heard of it? Great post.

Parnassus
Thanks for your help, since I am truly technologically inept and normally rely on small children for assistance. Just remind me what and where Youtube is.

I will shout you a coffee next time you are here :)


Sad yes, but what we do without tv, radio, internet and proper cinema? It seems that music halls, pantomimes and outdoor bandstands
etc did a brilliant job. I had some other truly gifted stage stars as well, but they will have to wait for a later post. Ditto some extremely gifted theatre owners/managers.

ps my grandmother was a professional dancer and singer in East End theatres, before and after WW1. Poorly paid but a great life.

Hi Hels, I am sure that you have seen Youtube before: https://www.youtube.com
On this site you can look up many old videos, movies, songs and performances, by many historical and more recent performers. Try looking up just about anything. --Jim

Hi Hels, thanks for the fascinating post! Have you heard of Jeffrey Hudson? He was Queen Henrietta Maria’s dwarf, a boy from Rutland, whom she treated as a son, but he also performed for the court. And like Little Tich, he had a sad end to his life, at about the same age.

I remember from my childhood people being affectionately called Titch or Little Titch. He must have been very funny. Thanks for the background.

I recall hearing his name but knew nothing about him. A really interesting and informative post.

I am retiring at the end of this academic year. Even if I was technologically ept (sic), the time has come to write more journal articles, present more papers at academic conferences and pay more attention to blogging.

I know the van Dyck painting of Queen Henrietta Maria and her companion very well, but not the name of Jeffrey Hudson. Well done, you!

But as clever as Hudson was, as talented as Little Tich was... would they have had hugely successful careers, had they been averagely tall? Would Velazquez have painted the Spanish Court's dwarfs, had they not so amused King Philip IV?

*sigh* I was the shortest person in my year at primary school and every school photo shows me, Titch, sitting at the end of the row. I hated being too young, too short and too underdeveloped to compete socially... until 14!

Harry, poor sod, never caught up with his peers. But I think he chose Tich to refer to the fake and obese Tichborne Claimant, not to refer to his dwarfdom.

I knew a lot about music halls, pantomimes and light hearted stage performers, and never missed a Christmas Summer Holiday panto that came to Melbourne. But some names went into history (eg Charlie Chaplin, Josephine Baker, Gracie Fields etc), while other names have largely disappeared.

I read about Harry's private life in the reference you gave me and now understand no more than I did before. His dad was 75 when Harry was born, he didn't know his mum and he only knew one of the 16 siblings.

Harry married Laurie, had a son Paul, then Laurie and Paul disappeared forever.

He married Julia and found out she was 20 years older than she had said. Julia raised other peoples' children as her own.

While still married to Julia, Harry moved in with Win Ivey, had a daughter Mary without Mary knowing that Uncle Harry was her dad. When Julia died, Harry could marry Win and tell Mary he was her dad. The family had two happy and financially stable years together then Harry hit himself on his head with a mop and died.

Hi Hels - a really informative post ... I'm sure I've heard of him - but now will remember Little Tich's name in the years ahead. He certainly made the most of his career ... pity about the end though ... cheers Hilary

It is often said that professional comics typically suffer from long term depression, covered up by a very public laugh. It would seem that Little Tich suffered from more than his share of life's miseries and failures.

I wonder how many modern comedians, addicted to fame and the wealth that comes with it, end their young lives through drugs, alcohol and weapons.

At least two generations of fans loved his work on stage, bought his postcards, saw his work at the cinema etc. Imagine dying and no-one remembering your name :(

A lovely story. It would be ideal for a stage show or even a cinema film I think. Thanks to Jim (Parnassus) I just watched the little guy in action. A charming tale but a sad ending in Australia - tough audience!
CLICK HERE for Bazza’s equanimous Blog ‘To Discover Ice’

Little Tich was hugely successful in the late Victorian era and throughout WW1. So what changed in the 1920s?

Partially by then he was older (mid 50s), not as physically agile and really struggling financially, supporting all his wives. AND perhaps his audiences were so changed by the tragedies of WW1 that "silly comedy" was no longer appealing.