As you can tell from my old posts, I've long been interested in Leipzig’s musical connections. Now let us summarise the details published in Discover Leipzig and then focus on the historic Bose House-museum.

Johann Sebastian Bach (1685-1750) was active in Leipzig’s musical life from 1723 on. He was responsible for the services and special cer­emonies at the churches of St Nicholas and St Thom­as. And, as the city's Director Musices, he was also charged with the organ­is­ation of a wide range of secular events. He directed an association of pro­f­essional performers and musically active students.

Many of his major compositions were written in Leipzig, including annual cycles of choral cantatas, St John and St Matthew Passions, Christmas Oratorio, Art of the Fugue and his Mass in B Minor. Since the C19th no end of effort has been put into the study and interp­ret­ation of Bach's works in Leipzig, and several instit­ut­ions, societies and competitions have been established.

The Leipzig Music Trail is an easy way to explore the musicians who lived and worked in the city. The sites lie on a 5km stroll that winds through the city centre, marked by curved steel inserts in the ground. See the Bose Family Home A C16th front home is one of the oldest buildings on the square outside St Thomas’s Church. The twin-aisled Ren­aissance entrance hall had imp­r­es­s­ive Tuscan columns and a portal with its porphyry Romanesque arch. The Bach family later lived across the street in St Thomas’ School, now demolished. 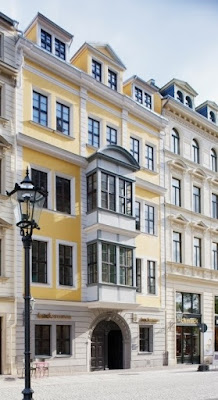 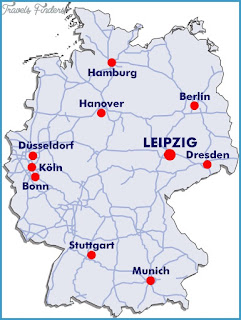 In 1710, the home was acquired by Georg Heinrich Bose, an af­f­luent manufact­urer of gold and silver products, who had it turned into a prest­igious Baroque merchant’s residence. The side wings and back building were newly erected by the Bose family. The façade of the front building has a two-storey bay window. In the rear build­ing, Bose installed a magnificent banqueting/concert hall, fitted with wall mirrors, a musicians’ gallery and a movable ceiling painting.


In 1745 Bose’s son-in-law Johann Zacharias Richter acquired the parental home, adding an extensive art collection of his own, and opening it to the public. From 1765 it was opened to connois­s­eurs on one afternoon each week for two hours. Among the celebrities who viewed the art treasures were Moses Mendels­sohn, Christoph Martin Wieland, Johann Wolfgang von Goethe, Johann Heinrich Wilhelm Tischbein and Jean Paul. The collection remained with the family until it was sold by auction in 1810. Some of these paintings are in Leipzig Museum of Fine Arts today.

In 1893, the instrument collector Paul de Wit opened a private mus­eum of music history in the old Bose House. Apart from hist­or­ical music instruments, the Paul de Wit's Museum of Mus­ic History gathered musical manuscripts, letters and port­raits of composers and instrument makers. Until de Wit’s death in 1925, the house was a meeting place for instrument makers, artists and publishers.

In 1973 the director of the Bach Archive erected a small Bach mem­orial in the Bose House entrance hall. Ex­tensive reconstruction took place in March 1985, then the Bach Archive was moved into what was now called the Johann Sebastian Bach Museum Leipzig. The first permanent exhibition was spread across four display rooms on one floor of the front building, as well as two small rooms for temporary exhibitions. More extension was added to the museum in 2000 and in 2008–2010, by including some of the neighbouring building at the back of the baroque courtyard.

Today its twelve thematically structured ex­hib­ition rooms are dedicated to the life/works of JS Bach, his family and to researching his rare original manuscripts. Displays include a double bass played in Bach’s orch­es­tra, surv­iv­ing furniture from his pers­on­al house­hold and Bach’s organ console from Leip­zig’s St John’s Church which he played in the 1740s. 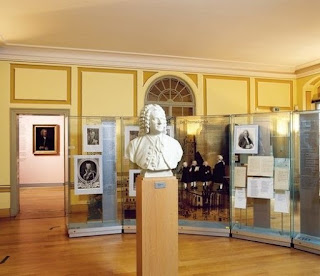 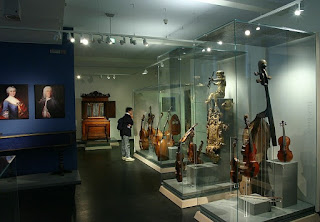 Felix Mendelssohn Bartholdy (1809-47) was born in Hamburg. He was the nephew of the philosopher Moses Mendelssohn and was one of the finest figures ever to emerge in the 19th century music world.  In Feb 1827 the première of his Symphony in C Minor at the Gewand­haus became the first public performance of his works in Leipzig. As Leipzig's important Gewandhaus Kapellmeister, Felix was resp­onsible for reforming the musical life of the city, instigating the “Bach Renaissance” in Germany. During his years in Leip­zig he worked hard to turn the orch­est­ra into one of the best in Europe. He shared in the founding of the Leip­zig Conservatory in 1843, and was very pleased that the first permanent staff included Robert Schumann. 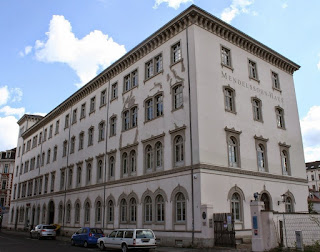 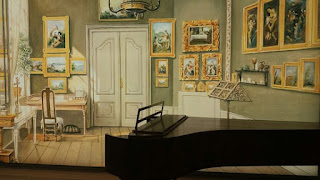 The late-classical building houses the Mendelssohn Museum which was first opened to visitors in 1997. The composer lived here from 1835 until his death, and his study and salon, where Wagner, Schum­ann and Berlioz visited, have been faithfully rest­or­ed. Sun­day morning con­certs are still held today in the renovated music salon.

Until March 2013, the offices of the University of Leipzig’s Music Faculty were located in the building and the music branch of the University Library as well. Then the extended Mendelssohn House reopened in 2014 with a new floor. Since October 2017, the world's only permanent exhibition about Felix’s talented older sister Fanny Hensel can be found in a number of rooms.

The Music Trail was easy to follow and full of surprises. JS Bach's house museum was my favourite.

Love the timing :) This week at the Museum we will be examining the classical composers, conductors and musicians who moved to Britain in the decades before WW2. Not all of them were German in general, or from Leipzig in particular, but I was VERY impressed with the concentration of talent.
In its time, Leipzig must have been very special.

Hello Hels, It must be wonderful to explore the heritage of such composers as Bach and Mendelssohn in the venue of historical houses. Paul de Wit is well known as a collector of historical instruments, so it is extra-important to have his collection on display and easily accessible.
--Jim

You are truly a fine man! Paul de Wit (d1925) was a Dutch trader who decided his role in life was to concentrate on collecting historic musical instruments. Where did his treasures go? A lot went to the Berlin Royal Academy of Music and to his own museum in Leipzig. Alas the rest was sold to a private businessman and haven't been seen in Leipzig since the pre-WW1 era.

Hi Hels - this is an excellent detailed reflection on the Leipzig museums and area ... I'd realised it was a little spread out - but you've given us a really interesting and informative 'report' on what to find etc, as well as the history - thanks ... cheers Hilary

Leipzig must have been very special! In 1887 at Christmas, star violinist Adolphe Brodsky invited his close friend Tchaikovsky to dinner. Other guests that night were Brahms and Grieg. They all played music that evening, to thank their host and to entertain the other guests.

I am glad you enjoyed the photos. The Royal Air Force made a horrible mess of Leipzig in the last years of WW2 but by the time I visited the city decades later, all the special buildings had long been rebuilt.