John Singer Sargent (1856–1925) was born in Florence and spent his childhood travelling across Europe with his wealthy ex-pat American par­en­ts who followed the changing social seasons. Young Sargent was enrolled in the Accademia di Belle Arti in Florence and later, when he was 18, the family moved to Paris.

In 1874 he entered the Paris atelier of the stylish French por­trait­ist, Auguste Émile Carolus-Duran, and developed a fluid painting style. It was re­markable for dazzling brush work and bold hand­ling of shimmering light. The young Sargent combined the flam­boyant style of his teacher with his study of old mast­ers like Rembrandt and Velázquez, and he was also influen­ced by the Impressionists.

Examine The Greats: Mast­er­pieces from the National Gall­eries of Scotland catalogue which accompanied the Art Gal­lery of NSW exhibition in 2015-16. It discussed how Sargent became the most fashionable portraitist working on both sides of the Atlantic in late C19th and in Ed­ward­ian society. 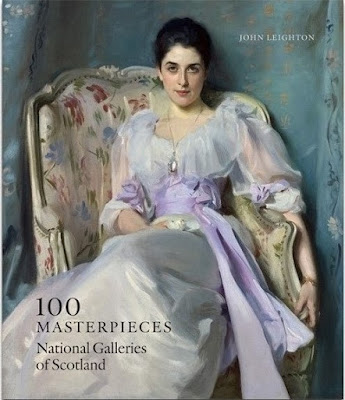 Sargent port­ray­ed a number of French and American sitters in Paris. See Madame Pierre Gautreau-Portrait of Madame X 1884, an Americ­an-ex­patriate who had married a French banker. Madame Gautreau bel­ieved that Sargent had painted a masterpiece, but others dis­ag­reed. When Portrait of Madame X was shown at the 1884 Paris Salon Ex­hib­ition, it received a scandalous reception. This pro­v­ocative portrait eventually ended up in the Metrop­olitan Museum of Art NY.

In that same year in Paris, Sargent met Amer­ic­an writer Henry Jam­es (1843–1916), who became a great­ supp­ort­er. Sargent and James were both Americans living in Europe, men who had spent most of their childhood abroad. James began to pave the way for the artist to cross the Channel.

When Sargent settled in London in 1886, he initially found it dif­ficult to find clients; his Continental style of painting must have attracted suspicion. However his technical mastery and confident manner was seen as ideally suited for arist­ocratic pat­ronage; he soon won over critics with his elegant, flattering portraits.

Lady Agnew (1865–1932) was born Gertrude Vernon, daughter of the Hon Gowran Char­les Vernon and Caroline Fazak­er­ly. In 1889 Gert­rude mar­ried Sir Andrew Noel Agnew who came from an old Scottish family. Her husband, 15 years her senior, was a barris­t­er and later an MP in Wigtownshire; he succeed­ed his fat­h­­er as 9th Baronet of Lochnaw in 1892, shortly before Sargent started this portrait. Work on the portrait progressed swift­ly; it was painted in just six sittings.

Lady Agnew was shown seated in a Louis XVI chair against the backdrop of a Chinese silk hanging, both of which were standard props in Sar­gent’s studio. Lady Agnew, then 27, had a notably langorous pose, possibly because of her frail health; she recovered slowly from a severe bout of influenza in 1890 and was still convales­cing and suffering from exhaustion when she sat for Sargent. Through her direct, front­al gaze and the informality of her pose, the subject forged a comp­el­ling connection with the viewer. Lady Agnew fixed the viewer with an intel­ligent, faintly amused gaze but it was her elegant white silk dress and lilac sash that grabbed the viewer's att­ention. There were brilliant highlights, reflections and col­our­ed shadows that showed Sargent as a painter of surfaces and text­ures, the ideal artist for a gilded but superficial society.

The painting’s sheer glamour (ie its lush, fluid brush work, del­icate colours, sense of opulence) meant it transcended its role as a depiction of an in­d­iv­id­ual. It be­came an icon for an entire era, embody­ing the grace and decad­en­ce found in fin-de-siècle Brit­ish soc­iety.


The connection with Sargent was probably forged through Ger­t­rude’s friends, the Dunhams, a New York family based in Lond­on; James and Harriet Dunham had six daughters, two of whom were painted by Sargent in the early 1890s. Gertrude and Noel dined with the Dunhams and Sargent, and Gertrude sat for Sargent dur­ing a period of exhaustion and convalescence. Her pose was not­ably langorous, as she stared very intently at the artist. 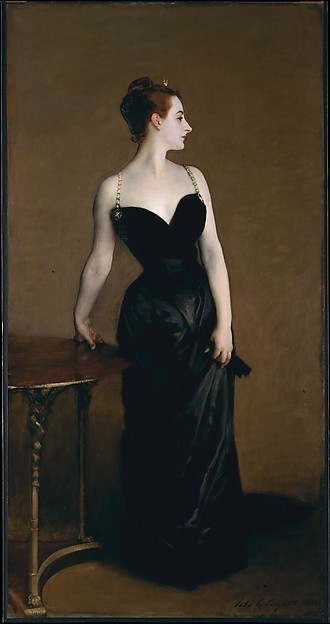 The appeal of Sargent’s work was partially reliant on the lovely clothing and setting selected for his sit­ter. Lady Agnew wore a pearl-white satin and chiffon tea gown. A bold mauve sash comp­lem­ented the trimmings on the sleeves. The pend­ant around her neck appeared to be surrounded by turqu­ois­es and seed pearls. Ger­trude was seated on a Louis XVI bergère chair, a prop from Sargent’s studio that he had brought from Paris years earlier. The Chinese tur­qu­oise-gold silk hanging was an­other prop from the artist’s collection of luxur­ious items.

The painting’s appearance at the 1893 annual Royal Acad­emy exhibition brought it to the attention of a wide pub­lic and prompted very enthusiastic reports from the critics. It con­firmed his reputation for elegant, port­raiture. The Times said in 1893 said “ A masterpiece, not only a triumph of technique but the finest example of portraiture in the liter­al sense of the word, that has been seen here in a long while”.

When the portrait of Lady Agnew was seen at the Royal Academy in 1893, Sargent was adored - he was now a society port­rait­ist for the London elite. But more than that, the painting helped trans­form the newly elevated Lady Agnew into a society celebrity. The Agnews’ London life in the period leading up to WW1 was defined by par­ties, dinners, rec­eptions and fashionable, lavish salons. Mind you, the cost of being a society hostess had to be met by the sale of Lochnaw land.

What happened to his paintings? Sargent hung the Madame X work in his own studies until 1916, when it was sold to the Metrop­olitan Museum of Art. The Lady Agnew picture was unsuccessfully off­ered in 1922 to Helen Clay Frick, a passionate coll­ect­or-phil­anth­ropist who was the daughter of Henry Clay Frick. Lady Agnew offered it to the Nation­al Galler­ies of Scotland trust­ees in 1924 but they couldn’t buy works by living art­ists. Then Sargent died in 1925, so the work was immediately purchased by the Scottish National Gallery.

I will come back to Sargent's watercolours later. Sargent: The Watercolours was on at Dulwich Picture Gallery, London during 2017.

Did Sargent ever live in the USA?

I can't get past her face and eyes. Just my opinion, I would put this up as one of the finest portraits ever painted.

I don't suppose John's parents expected to live in Europe so long, before and after their son was born. In fact he didn't even visit his parents' homeland until 1876 when he was 20. He made a few more visits to the USA over a decade, then moved permanently to London in 1886.

Do you mean Lady Agnew's face and eyes? Agreed... He was still painting sublime portraits throughout the 1890s and didn't change to travel studies in watercolour until the new century. The British aristocracy never looked so grand.

Hi Hels - he certainly was an incredible artist ... these works are delightful to look at. I know him from the Ellen Terry portrait (beetlewing dress) that hangs in The Tate ... which we had a talk about and then I wrote up a post ... But this is great to get some background to him ... which I didn't know about. Cheers Hilary

I know the dramatic image you refer to but I didn't remember who had painted Ellen Terry in that dress. I would love you to create a link to your post, so that my readers could have a look.

Yes, I meant the Lady Agnew portrait. I am just back here to copy and paste your post about the occupation of the Channel Islands in a comment on someone else's blog.

Hello Hels, It is interesting to compare John Singer Sargent with the equally iconic Charles Dana Gibson, and whose styles overlap. Sargent seems to capture the sitter's intense personality as part of her era, while Gibson shows an ideal of womanhood--even in group studies, the "Gibson Girl" stands alone and independent.

Look at this drawing by Sargent, which one could almost swear was by Gibson!
http://4.bp.blogspot.com/-ISAj2R398rU/UP2hj7rmc5I/AAAAAAAAB0g/COCLMS8Jo5k/s1600/Portrait_drawing_of_Mrs_George_Swinton.jpg

Whenever I have wanted to compare the two artists, it has been on political values rather than stylistic grounds. Their 1890s New Women were bright, alert, involved in non-domestic issues etc.

I just love looking at the works of John Singer Sargent. I find him to be the most pleasing of painters! I am especially fond of his watercolours and actually prefer his water scenes and nature works to his portraits although he was a superb portraitist. It's almost voyeuristic in a way.....
CLICK HERE for Bazza’s unimaginable Blog ‘To Discover Ice’

he was indeed a superb portraitist, creating rich creamy visions of important women that have stood the test of time. But I didn't examine his nature works closely until the Dulwich Gallery showed Sargent: The Watercolours. I seem to recall from decades ago that "real men" used oils :)

I was examining donations to the Tate by the Duveen family, English art dealers I know very well. You will be amazed by the coincidence ...but Sargent's Dame Ellen Terry as Lady Macbeth was the best donation in 1906.