Architecture in Monet's art.... at the National Gallery London.

A fine show, The Credit Suisse Exhibition: Monet & Architecture, is running until late July 2018 at the National Gallery London. Until now, most people thought of Claude Monet as a paint­er of landscape, sea and later, gard­ens. But not of architecture.

Featuring 75 paintings by Claude Monet (1840-1926), this innov­ative exhibition spans his long career from the mid-1860s to the public display of his Venice paintings in 1912. As a daring young artist, he exhibited in the Impressionist shows and displayed the bridges and buildings of Paris and suburbs. And later the renowned architecture of Venice and London.

Buildings played important roles in Monet’s works. They served as records of locations, identifying a village by The Church at Varengeville, Morning Effect 1882 (San Diego Museum of Art), or a city such as The Doge’s Palace Venice 1908 (Brooklyn Museum) or Cleopatra’s Needle & Charing Cross Brid­­ge London 1899–1901 (Halcyon Gall). Architecture suggested modern­ity: the glass-roofed int­erior of a railway stat­ion eg The Gare St-Lazare 1877 (National Gallery London), whilst a venerable struct­ure, such as The Lieut­enance de Honfleur 1864 (priv coll), marked the hist­oric.

Architecture aided Monet with the business of painting. A red-tiled roof could offer a complementary contrast to the dominant green of the surrounding vegetation From the Top of the Cliffs Dieppe 1882, (Kunsthaus Zürich). The textured surfaces of buildings provided him with screens on which light played, solid equivalents to reflections on water Rouen Cathedral 1893–4 (private coll). 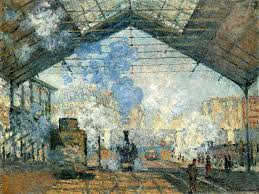 A man-made structure helped the viewer engage with Monet landsc­apes. A distant steeple eg The Church at Varengeville 1882 (Barber Institute Fine Arts) or nearby house Gardener’s House at Antibes 1888 (Cl­eveland Museum Art), suggested scale. They helped the viewer read his physical surround­ings in terms of distance, destination and the passage of time involved in transit. Arch­itect­ure could suggest mood, wheth­er it be awe at the grandeur of a hist­or­ical monument San Giorgio Maggiore 1908, (Priv coll), thrill at the vitality of a teeming city street The Pont Neuf 1871, (Dal­las Museum Art) or lone­lin­ess at the solitude of the clifftop Custom's Officer's Cottage Varengeville 1888 (Harvard Art Mus).

The Monet & Architecture exhibition is displayed in sections: a] The Village and the Picturesque, b] The City and the Modern and c] The Monument and the Mysterious. It explores how one of the world’s best-loved painters captured a rapidly changing society though his port­rayal of buildings.

Monet & Architecture highlights special pairings eg both paintings of the Church at Vétheuil, which Monet made immed­iately on arrival in the village in late 1878 (Scottish National Gallery). One was shown at the 4th Impressionist exhibition in 1879, and the other at the 7th exhibition in 1882, but they have never been seen together. The National Gallery's well-known The Thames below West­minster 1871 is being shown alongside a picture of the Beach at Trouville 1870 (priv coll).

Many much-loved Monet pictures have been taken to London: the Quai du Louvre 1867 (Gemeente Museum Den Haag), one of his first cityscapes, Boulevard des Capucines Paris 1873 (Push­kin State Museum Fine Arts Moscow) shown at the first Impr­es­sion­ist exhibition in 1874 where it caused controversy; and the flag-filled Rue Montorgeuil Paris, The National Holiday 1878 (Musee d’Orsay) made to celebrate the celebration of a nation­al holiday. 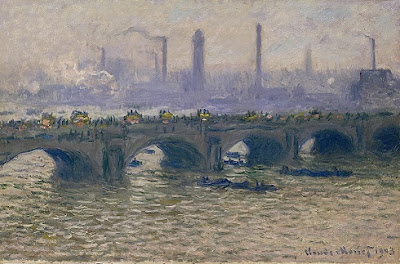 Monet displayed his location through buildings, revelling in kaleidoscopic atmospherics and the play of sunshine, fogs and reflections, using the characteristics of the built environment as his "theatre of light". He said in a 1895 interview “Other paint­ers paint a bridge, a house, a boat … I want to paint the air that surrounds the bridge, the house, the boat – the beauty of the light in which they exist.”

In the end, Monet used architecture for his own needs. In most of Monet’s paint­ings, the built environment was surrounded by or integrated with the natural one. So in many ways, his arch­it­ectural paintings were not very different from his nature studies. Clearly he was not inter­est­ed in the pomp of palaces and bridges, or in picturesque ruins. And he did not see buildings as expressions of taste.

Yet Monet’s Rouen, Par­is and London architecture have become part of the visual land­scapes of our imagin­ation. Art historians have emphasised that the buildings were just a pretext for painting the sublime. His Paris­ian scenes showed groups of pedestrians milling along the stepped quays. And light filtered through the sloping glass roof of the new Gare Saint-Lazare. Lond­on’s Waterloo Bridge, Houses of Parliam­ent and the grimy factories made the ever-changing play of climate, atmosphere and light around them stand out.

When we examined "Charing Cross Bridge" and "Late Gare Saint Lazare: Arrival of a Train" in lectures, I wondered why Monet painted filthy smoke stacks and noisy train engines. They seemed unlike Monet.

When Claude Monet lived to Argenteuil during the 1870s, I think he got to love open, fresh air and colourful natural landscapes. So while The Arrival of a Train (1877) may not be literally a part of the natural landscape, it is still a vibrant, Impressionist image.

Hello Hels, I am having trouble writing a concise comment as I start to realize the immense and complicated issues surrounding architectural paintings, so forgive the "sketchiness" of these thoughts. Not only do buildings provide a structure and background for the artist's skills, but in painting its "aura" as Monet describes it, the painter's fancy will be projected onto the building. Photos of a building taken at different times also show how aspects of this aura affect our sense of the building's looks and meaning. A great many painters have captured this essence of architecture--Edward Hopper's architectural studies are particularly eloquent in this regard.
--Jim

I understand totally. When Monet was a very elderly man, he started painting nothing but flowers in water, a garden and sunlight. They were very beautiful paintings, but I was very pleased when he added a small bridge, so that there would be something of substance. How much more so when he focused on more monumental structures in his earlier decades.

Looking La Gare Saint Lazare it becomes clear what the impressionists owed to JMW Turner. Incidentally, I have always thought that Monet's multiple studies of Rouen Cathedral were about light and colour than they were about architecture. I am wrong?
CLICK HERE for Bazza’s habile Blog ‘To Discover Ice’

In 1990 I asked my late father about doing art history at University. He did the subject when he was a first year undergrad back in 1939! He remembered and loved only ONE work from the entire year - Turner's Fighting Temeraire!

You are correct. Monet owed a great deal to Turner.

Dad didn't know whether he wanted to do Engineering or Architecture, so he did a combined first year (thus the art history). But when war broke out in the middle of his first year, he finished a science degree in three years, joined the army throughout 1944 and 1945, and was demobbed in Jan 1946. He went back to uni post-war and did an engineering degree, but never lost his passion for architectural history.

I was very fortunate. My mother knew everything about music, literature and foreign languages, but my father knew about art and architecture.

Hi Hels - lovely post ... and you've great commenters too. Your family history is interesting and no wonder you've carried on with your parent's love of those subjects. I'd love to see the exhibition ... but am on the wrong continent for now - but you've given me some food for thought and your post is here for another look - cheers Hilary

It is difficult when we are on the wrong continent *nod*. It takes months for me to book overseas travel and it costs a fortune every time, so I do understand. If only major exhibitions like the "The Credit Suisse Exhibition: Monet & Architecture" travelled the world, after it finished in London's National Gallery.

So I rely on informative catalogues and good quality blog posts.