Harold Freedman: Artist for the People was at the Art Gallery of Ballarat in 2017. Freed­­man’s designation as a people’s artist was seen in his democr­atic teaching style, his well-known murals, and his serv­ice as an Official War Artist in WW2. But whereas Christopher Allen (The Australian, May 2017) and blogger Black Mark thought the work was insensitive to modern art styles, Ballarat curator Julie McLaren believed the work was access­ible, democratic and full of honour for the WW2 soldiers.


In WW2, Freedman enlisted and became a war artist attached to the Royal Austral­ian Air Force Histor­ical War Records Sec­tion. He worked during 1944-5, in Bor­neo, Noemfoor and around Australia. Freedman and two other Austral­ian artists, Eric Thake and Max Newton, were all appointed to doc­ument the RAAF because the Army had previously dominated official art assignments. The more famous artist Sidney Nolan applied to be an official war artist, but was rejected. So he operated as an Unofficial War Artist instead. As did artist Albert Tucker. 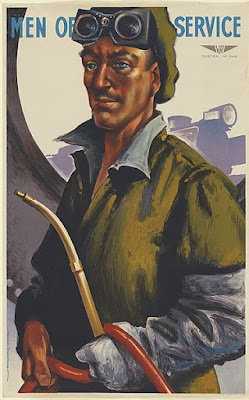 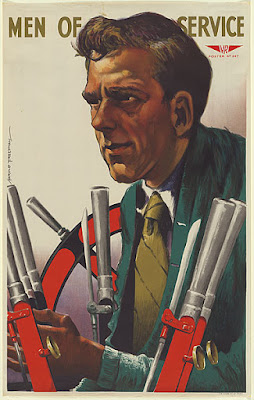 Freed­man honour­ed a group who felt under-valued by the public - he portrayed these men and women as noble and dignif­ied. Each image comprised of layers and layers of colour, as in magazines. His work was well represented in galleries, including The War Memorial in Canberra where his official portraits sustained the glamour surrounding the WW2 air force (handsome men in smart uniforms etc). His portraits were sometimes moody eg Wing Commander Clive Caldwall (1944) but always showed intel­lig­ent seriousness.

And see Freedman’s portrait of Victoria Cross winner, Pilot Of­ficer Raw­don Middleton. After his cock-pit was fired on over Italy, Middleton flew his damaged bomber over the Channel to allow his crew to safely bail out close to Britain. Middle­ton tragically died.

Men and Women of Service was a post-war propaganda programme that emph­as­ised those who had worked in the Victorian Railways during the war. Because they had been required to remain working in essential services, these people had truly made an important con­tribution to the war effort! Freedman made large coloured litho­graphs that were displayed in Victorian railway stations.

Once again each figure was designed as socialist real­ist type. The station­master was stout and paternal, the signalman lean and an­x­ious. The medium and scale of lithography seem to make the feat­ures coarser than they would appear in paint­ing. But did they produce an effect that was readily recognised and much loved, OR profoundly cliched?

Post-war, Freedman taught at the Technical Coll­ege/RMIT, creating bold, colour-blocked pos­ters. In 1951 his work­shop for print­making was established at the College, but open for artists from the National Gallery School as well. Fred Williams, Charles Black­man, Kenneth Jack and Leonard French were the enthusiastic part­ic­ipants who began ex­hib­iting together in 1954. By 1960, Freedman arranged after-hours classes and brought the supplies. The Melbourne Print Group formed the found­ation for printmaking in the city’s art and technical colleges for many years. 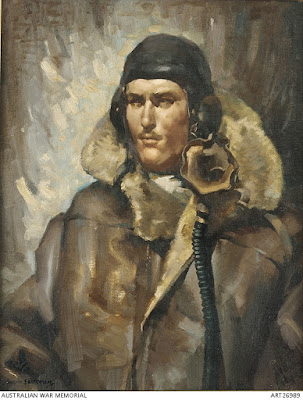 Murals The last third of the Ballarat exhibition was devoted to Freedman’s murals, beginning in the late 60s. His first large (4.5 x 60 ms) painted mural was commissioned by the Australian War Memorial. This metic­ul­ously researched work marked the 50th anniversary of the RAAF and formed a backdrop for the war memorial’s RAAF section.

An ABC docum­entary focused on the immense mural (10m x 40m) docum­ent­ing the history of transport in Victoria. One could see the work on the mural being completed, with the aid of a team of assistants. The painting studio was soon re­located to an old electricity sub-station where rail­way carpenters built a massive easel. The mural was plan­ned for a large wall at Spencer St Station, specifically left vacant for this pur­pose, and was to illustrate all the modes of transport during Vict­oria’s boom time from 1834 – horses, trains, trams, cars etc. It was unveiled in Jan 1978 with a gala parade of historic vehicles and vintage aircraft.

A large catalogue, written by Gavin Fry, David Freedman (art­ist’s son) and David Jack (another artist's son), noted Freedman enjoyed the chall­enge and made it central to his work, rather than seeing it as an irksome task. Freedman made art to entertain & colour the lives of working people. 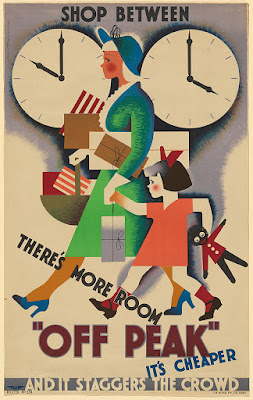 Harold’s aim was to create a very Australian ex­perience. See the Cavalcade of Transport mural, commis­sioned by the government for Spencer St railway stat­ion concourse. It showed every type of trans­p­ort used during the first century of Victoria’s European settle­ment. This massive work was completed by a team of artists in a giant build­ing in Brunswick, during 1973-7. The mural was later removed from Spencer St during the retail development of what is now Southern Cross Stat­ion, and only remains on display above shop-fronts in the Direct Factory Outlets. The artist’s pub­lic works had been compromised by prop­erty development.

The Regional History of Geelong was the first major mosaic mural created in the state studio. Harold created the full-size, colour painted cartoon and his assistants finished the mosaics, in total taking 2.5 years to complete. It can be seen today in the Geelong Art Gall­ery. 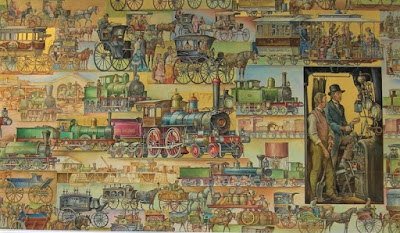 History of Transport, 1978
on the north wall of the Direct Factory Outlet building, Southern Cross Station
Victorian Heritage Data Base 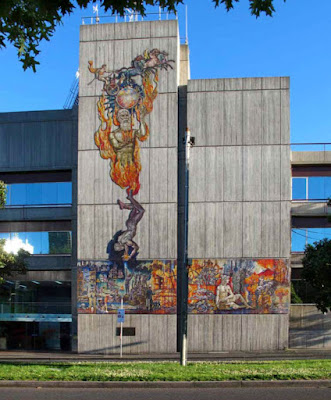 The Legend of Fire mosaic, 1982
on the wall of the Eastern Hill Fire Brig­ade, Melbourne
Credit: Harold Freedman Tribute 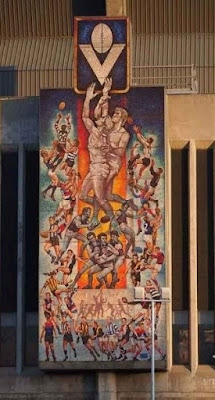 The Legend of Fire mosaic covers the wall of the Eastern Hill Fire Brig­ade’s headquarters and museum in Albert St East Melbourne. The colour cartoon was created in small and then manually enlarged to the installation size, five ambitious storeys high.

Harold next prepared vast murals for the Victorian Racing Club. The new Hill Stand at the Flemington Race-course was chosen to display the History of Australian Thoroughbred Racing. Midway into the project the newly elected conservative government made a change in arts policy and the studio suddenly became a priv­ate enterprise. At the invitation of the VCR chairman, artists coll­aborated on horses in Freedman's murals, completed in 1988.

Meanwhile Harold negotiated with the Victorian Football League to start a project celebrating the human form and football. His mural and the assistants’ mosaics were installed at the Waverley Park football ground in 1986. He was awarded the Order of Aust­ralia in 1989.

While I have taken them before, I recently took new photos of the fire station mural and I will show them soon. I love the mural hidden away in a shop at So Cross Station. How sad that the station mural has been treated so disdainfully, let alone the desecration of the Mirka mural at Flinders Street.

The History of Transport mural is of historic, cultural and social significance to the State of Victoria. The mural is historically important as the first of a series of public art works commissioned by the State Government following the appointment of Harold Freedman as State Artist in 1972. The mural is the largest work (36.6m long and 7.32m high) painted by Freedman and the most ambitious narrative work of its kind in the state.

The History of Transport Mural is culturally and socially important as a graphic public record and celebration of the role transport played in the development of the state from a simple pastoral settlement to a modern progressive industrialised entity during its first century.

See an image of the mural http://vhd.heritagecouncil.vic.gov.au/places/6058

Hello Hels, Freedman's soldiers remind me of Norman Rockwell with a touch of hyper-realism added. His murals seem a little overwhelming, but that is probably because I am seeing them in such a small format instead of in real life and scope. His "Shopping" poster is perfect design, and my favorite of his artworks posted here--so much going on and to attract the eye, but shy of too much.
--Jim

Hi Hels - I know 'nothing' about Australian art - so this post along with the information was eye opening - and I should keep my eyes open for more work along these lines. War art - is absolutely amazing to see ... as we learn so much. Thanks for this great post - cheers Hilary

which Mirka Mora desecration? Her mural at Flinders St seems in good condition, but her mural in the old Balzac was protected in plastic then covered by a new wall. As far as I can see, it was perfectly restored a few years ago.

Good on you for capturing Freedman's fire station mural in detail.

I will try and add the History of Transport mural into the post. Many thanks for the link to the Heritage Council of Victoria.

Freedman's railway poster reminds me of the early 20th century and deco posters that stressed clean lines and bold colours, with a minimum of text blocking the image. And the family theme was always a winner.

I didn't know anything about Freedman's art until I worked in the same office as one of the artist's relatives and we became very good friends throughout the 1980s.

I happened to mention to my father that I "discovered" amazing art work via the artist's relative, and my dad started laughing. He and Old Harold had been great mates when they were demobbed in WW2 and returned to Melbourne together.

wow really superb you had posted one nice information through this. Definitely it will be useful for many people. So please keep update like this.

Welcome aboard. I have written many posts on architectural history, but this wasn't really one of them. You will enjoy the next post, I promise :)

I thought the same as Jim (Parnassus), that the portraits reminded me of Norman Rockwell's art. That's no bad thing in my opinion. Freedman conveys great depth of character in those pictures and I like the almost 'caricature' look of them, especially the Signal Man picture.
I would like to feature him in a future Painting of the Month post; he is an artist that Australia can be proud of.
CLICK HERE for Bazza’s novaturient Blog ‘To Discover Ice’

Rockwell's art was very endearing but often considered a bit shallow, appealing to ordinary families rather than to art connoisseurs, and not aware of modern art movements.

Similarly I called Freedman an "artist for the people" because that is what the Art Gallery of Ballarat called his exhibition last year, but also because the modern art fans thought his art was not complex enough.

Beautiful image the building You chose well for the theme.
Your blog is very nice,Thanks for sharing good blog.
สล็อต casino

Welcome aboard. And I agree... We don't often see murals as the main decoration on buildings.

I am related to him

I hope you are proud of your uncle or cousin. I met Harold in the 1980s when his career was largely over, so I went on "tour" of his public works. Loved it.