I like Grace Cossington Smith’s art very much, but was surprised to see a historical scene, rather than her more usual images of contemporary life. More about her later.

Soon after the first load of convicts arrived at Sydney Cove in 1788, Gov Phillip travelled to the headwaters of Port Jackson. Finding good soil and fresh water there, he formed a settlement at Rose Hill and mapped out a town plan along the creek: Parramatta. There were soon 1000 people living in the district, minist­ered by the Rev Richard Johnstone once a fortnight.  A temporary church, formed out of two old huts, was opened at Parr­amatta in 1796. Services were first performed in it in Apr 1803, making this church is the oldest in the colony.

In Mar 1794 the Rev Samuel Marsden arrived from Britain and was appointed assistant to Rev Richard Johnson, stationed at Parram­at­ta. It was an import­ant centre in the colony and Marsden remained there for some years. He was promised the position of senior chap­lain in 1802, but was not properly paid and was not formally prom­oted until later. Still, Gov Lachlan Macquarie allowed him to live at Parramatta as being more convenient for carrying out his gen­eral superintend­ing duties, and named Marsden as the resident chaplain.

By 1802 the Rev Marsden had received hundreds of Parramatta-acres in grants, so Marsden quickly committed himself to farming. It brought financial security for a large family, and social accept­ability and power to which he could not have aspired at home. At the same time he was incited by the greedy temper of the colony; the off­icers had begun their single-minded pursuit of wealth.

Mar­s­den was appointed magistrate and superintendent of government affairs at Parramatta. His harshness can be attributed to his vig­orous morality, his loath­ing of sin and his view that Parramatta was an immoral cesspool; thus the most rigorous discip­linary measures were required. This flogging parson was of course loathed. 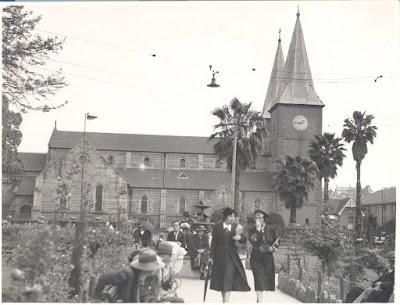 In 1799 he opened a Sunday school and progressed the building of a new church. The permanent St John’s Church (opened in 1803 but was still in­complete) had two brick towers, inspired by similar archit­ecture on Reculver’s Church in Kent. The towers were designed at the request of Mrs Macquaire, as Reculver’s was the last church she saw as she left the UK. Gov Macquarie asked his aide-de-camp to come up with designs (which can still be found in the Mit­chell Library Sydney today).

Marsden took an active and well-public­ised interest in the creation of an orphan home and school. When he travelled back home in 1807-09, he was able to recruit additional assistant chaplains. Later he att­racted Mrs Eliz­abeth Fry by his zeal for improving the lot of female convicts on the transport ships and in the colony. The immorality and crime that prevailed in Parramatta, he thought, was largely due to the dilapidation of the Female Work Factory.

St John’s Parsonage Parramatta, was Francis Greenway’s  first major work as NSW’s Acting Civil Architect, the first house designed in the colony by a trained architect. The foundation-stone was laid by Marsden’s daughter in Apr 1816. Work was completed by Nov 1817, overseen by Rev Samuel Marsden who became the building’s first inhabitant.

Marsden died in 1838, was buried at St John's Parramatta and was replaced by his son­-in­-law. Later it was decided to pull down the old church so the original chapel was demolished in 1852 and rep­laced with a new sandstone nave built in Romanesque Revival style. The first building was removed except for the two towers and later, in 1883, the transepts were added. 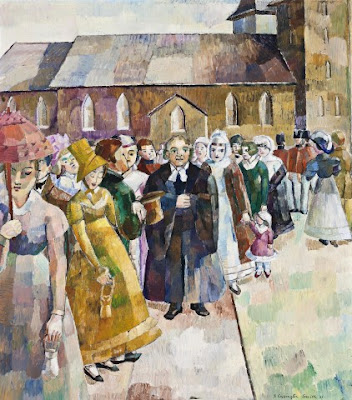 
For Australian artist Grace Cossington Smith (1892–1984), her car­eer was boosted after de Maistre organised her first show in 1926. In fact Grace’s art started to sh­are many of the same tech­niques as Roy de Maistre's: criss-crossing lines that separ­ated planes of discrete colours, in sequence. In the decade from 1926 on, her potential as a painter of colour and light, structure and rhythmic pattern, emerged. 1938 was her most significant year with 1] the death of her fat­her, raising her position in the family; 2] modern­ist Thea Proctor highlighted her work in Art in Australia and c] Grace was included in a professional museum exhibition.

Shown at the Sydney’s Art Gallery of NSW, an ex­hibition called 150 Years of Australian Art was organised by the then-Dir­ector, Will Ashton. It celebrated was the Sesquicentenary of European settle­ment of Aus­tralia 1788–1938, a historical event which witnessed a round of special cel­e­brations. There was a major Comm­on­wealth Gov­ern­ment prize for the best oil painting depicting an aspect of Aust­ralia’s hist­ory. So as soon as she completed her painting in Jan 1938, Cossing­ton Smith ent­er­ed her painting, Samuel Marsden After Service at St John’s Church Parramatta.

Deutscher & Hackett's 2018 auction catalogue said Grace Cossington Smith’s highly personal choice of subject echoed her own life as a devout Anglican Christian. Marsden stood firmly at the centre of the image, the strong geometry of the composition led the eye towards him and then to the church which he was so instrumental in founding. Uniformed figures in the distance, and the small child to the right of Mars­d­en, symbolised the development of the settlement from a penal colony to a place where the growing free population, gat­h­ered together for regular worship. This celebratory picture was infus­ed with a deeply personal spiritual values, and displayed Coss­ing­ton Smith’s belief that painting exp­resses form in colour vibrant with light.

The NGA said Cossington Smith's love of architecture that informed her later work was already apparent in her meticulous studies of churches and Winchester Cathedral in England. The example they gave was Church Interior c1941-2 where she painted church interiors related to theme of the Second World War.

I have a vague recollection that Marsden was called the 'Whipping Priest'.

I know all the familiar Grace Cossington Smith images, eg those held by the Art Gallery of NSW: https://www.artgallery.nsw.gov.au/collection/works/?artist_id=cossington-smith-grace

But I don't think I had seen a church image by Ms CS, until the Deutscher & Hackett's 2018 auction catalogue came out. So thank you.

I am sorry the Rev Marsden was treated with less than the honour he thought he rightfully deserved. But his loath­ing of sin, and his view that Parramatta was a sewer, were ridiculous. Brutal discip­linary measures were not required - good food, pay and decent living facilities were required.

Pardon me if my comment is slightly off-topic, but I just looked at a lot of Grace Cossington Smith's work and I really like it! Looking through about 100 images I was constantly reminded of other other artist's styles such as Matisse (and all of the colourists), Cezanne, Bonnard and even Seurat. That doesn't mean that she didn't have style of her own and I particularly like various views of 'Eastern Road, Turramurra'.
CLICK HERE for Bazza’s unripe Blog ‘To Discover Ice’

Hello Hels, After reading the grim story of Rev. Marsden, I was delighted by Grace Cossington Smith's delightful and colorful depiction of the worshipers at the church, although I do seem to detect a bit of puritanical austerity in the painting of the church itself, especially contrasted with the smiling faces in the crowd.
--Jim

Spot on topic! Cossington Smith's earlier works were very much a part of the post-Impressionist tradition. Her techniques (broad brush strokes, bright colour) would have made Matisse and Van Gogh very proud.

I always understood Cossington Smith's personal religious feelings and now I understand her interest in church architecture. But why did she name the painting after a specific cleric from 140 years earlier? Did she feel as if she was righting previous wrongs in Rev Marsden's life?