Martello towers and maritime forts across the globe

The first Martello Tower I ever saw was on a tour of Saint John in Canada, as we will see. But I have relied on LW Cowie for more detailed information.

These curved forts first spread across Europe, inspired by the Genovese defence system at Mortella Point in Corsica. Built from 1565 on, Corsican coastal towers were built to protect the villages from brutal Barbary-coast pirates. The towers and their watchmen were paid for by local villagers, and whenever a pirate threat was seen, watchmen alerted the locals by lighting a fire on the tower’s roof. Later the Genovese built another generation of circular towers, used against other foreign invasions.

Although close to the French coast, the island of Jersey wanted to remain British and thus constantly feared French invasion via the coastal bays. In 1779 there was an unsuccessful French attack in St Ouen’s Bay and in 1781, hundreds of French troops landed and marched on the capital, St Helier. Strengthening coastal defences became a priority. The Governor of Jersey planned to build 30 round towers to protect the island's coast line, a’ la Corsica. Although Jersey did get 22 of its towers, it took the British Navy years to realise what their defensive value might be. Some surviv­ing Jersey towers are now used as exhibition space for adjacent wildlife conservation areas. 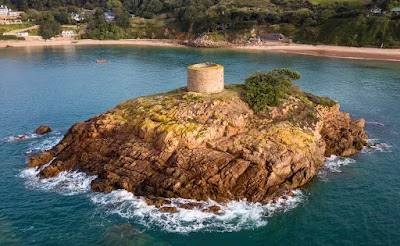 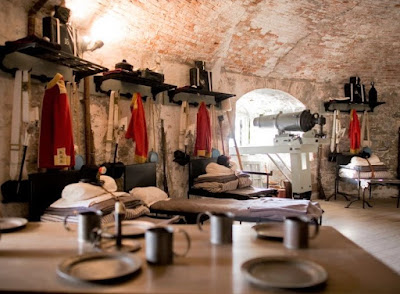 Carleton Martello Canada interior, now a museum.
A guard room for 13 men, their beds, a dining table and a cannon.

In 1793 the British government received an appeal from General Pasquale de Paoli, the leader of the Corsican insurgents who were fighting against French troops. British ships were sent there but the only secure anchorage in the Gulf of San Fiorenzo was commanded by a stone tower. To defeat the French in 1794, the Mortella Point fort was captured by the land-based British military forces, largely because the Corsican’s cannons were facing seaward and couldn't change direction fast enough. When the British withdrew in 1803 they blew up the tower, leaving a wreck. But they liked the Corsican fort and went on to replicate the design at home.

How quickly they were needed! Early in 1805, a series of strong sites were being built along the Irish and English coast-lines, to defend against Napoleon’s army lined up across the Channel. By the time the Napol­eon­ic threat ended in 1815, 103 English towers were fully funct­ion­ing, mainly on S.E and Sth coasts. You can still see 45 of them in Essex and Suffolk etc to­day. Two supporting forts were built at Dymch­urch in Kent (now a museum) and Eastbourne in East Sussex.

In Ireland, they were concentrated around Dublin Bay, and Cork Harbour on the south coast. The West Cork islands of Garnish, Glengarriff and Bere, along Ireland's southwest coastline, have intact towers that can still be easily visited. 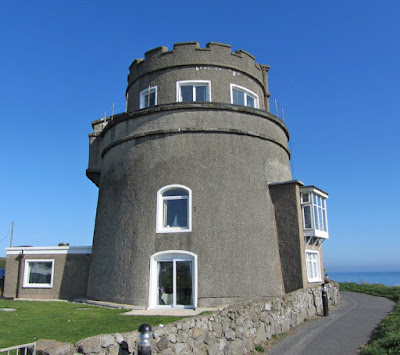 The British towers were c40’ in height and were 2-3 storeys high. The thick round walls of solid stone­work had two great advant­ages. 1] they were very resistant to enemy cannon fire and 2] the garrison of men who lived there had complete 360 degree views from inside.

The wide roofs made a solid base to hold a rotating cannon on a pivot. Martellos used the ground floor as a stockroom where supplies of ammunition, food and water were kept; a cistern within the fort provided rain water. The first floor provided accommod­ation for 24 men plus 1 officer, plus a separate room for cooking. Fireplaces were built into the wall on the first floor for heating, bathing and cooking.

The Channel Islands had fortifications that included castles, forts, Martello towers, artillery batteries and seawalls. These is­lands were the only part of British soil to be occupied by the Ger­mans during WW2 and German soldiers quickly realised that the towers could be adapted for their own defence. The Martello tower at Fort Saumerez on Guernsey, for example, had a German Observation tower added during WW2 and the tower at Bel Royal Jersey was strengthened by a concrete bunker. 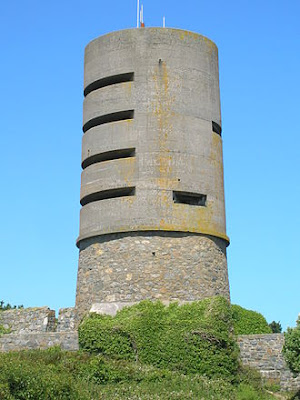 Of Halifax’s five towers in Nova Scotia, visitors can see the Prince of Wales Tower, the oldest round fort in North America. It was built in 1796 and was used as a powder magaz­ine. Restored, it too is a National Heritage site. The Duke of York Tower was built in 1798. The Duke of Clarence Martello Tower stood on the Dartmouth shore.

Of Quebec’s four Martello towers, Tower #1 stands on the Plains of Abraham, overlooking the St Lawrence River. It has been restored as a summer museum.

Six Martello towers were built at Kingston Ontario to defend its har­bour and naval shipyards during the Oregon Boundary Crisis. Murney Tower and the tower at Point Frederick, once serving against marine att­acks, are now summer museums. Fort Frederick Ontario had the most highly structured def­en­c­es: earthen ramparts and a limestone curtain wall. The Shoal Tower, the only tower surrounded by water, stood in Kingston's Confederation Basin. Cath­cart Tower, the 4th tower, stood on Cedar Island near Point Henry. The Oregon Boundary Crisis might have ended quickly, but the American Civil War made the Canadians fearful again. So the towers once again got armed up.

The last Martello tower in the British Empire was in Australia; Fort Denison, built on a small island in the centre of Sydney Harbour. Construction began in 1839 when two American warships crept into Sydney Harbour. The threat of foreign attack made the government carefully examine the harbour's limited defences. Re-construction in 1855 again provided Sydney with naval protect­ion, this time against the threat of a naval attack by Russians dur­ing the Crimean War (ended 1856). Fort Denison still enjoys 360 degree views of Sydney and operates as a museum and gun powder store.

Defensive towers in the USA were concentrated on the east coast. They were built in the harbours of Portsmouth in New Hampshire, Charleston in South Carolina, Key West in Florida and one or two others that did not survive. Although the Key West towers were constructed with different building materials and in a different design from those in Britain and Canada, the Garden Club (west tower) and the Museum (east tower) were added to the nation's National Register of Historic Places.

Hi Hels - this looks to be extraordinarily well researched ... I'll need to be back - though we do have three martello towers in Eastbourne - where I'll be returning to once I've finished here ... thanks - love that your interested in all these subjects - cheers Hilary

this is a fascinating topic that I came across accidentally in Canada and then in Jersey, Guernsey and Sydney. But not yet in Italy or the Irish and English coast-lines.

Perhaps you will write a comment after you have had a look at the Eastbourne tower/s.

Hello Hels, How fascinating to learn about Martello towers. I have probably seen them in photos and assumed that they were the bases of old lighthouses, mills, etc. Newport, Rhode Island has a famous old stone circular tower, and even Cleveland, Ohio had one overlooking the city from the "Heights". Despite all kinds of wild theories, these were likely built as non-military observation towers/architectural follies.
--Jim

it was very easy to confuse a martello with a lighthouse because the _design_ and _coastal location_ were often so similar. The martello had to have beds enough for at least 13 men and one officer, whereas the lighthouse needed beds only for the keeper's family. But the _defensive role_ made the biggest difference - the martello building had to be so thick that cannon fire would be repelled.

I am surprised that the USA didn't have more defensive towers back in the early 19th century. Perhaps there were more originally built, of which some later fell into ruin - this may be because heavy stone wasn't always used in the USA.

The opening scene of James Joyce’s Ulysses is set in a Martello tower in Dublin which was, of course, constructed as a defence against Napoleon’s forces. When I read the book as a teenager I didn’t know what they were so I researched the topic and have always been aware of them since then. I’ve seen the tower in Sydney Harbour – it’s short and very cute!
CLICK HERE for Bazza’s off-centre Blog ‘To Discover Ice’

yes!!! #11 martello in Sandycove Co. Dublin is called Joyce’s Tower, with a museum dedicated to James Joyce (because he lived there for a week in 1904). If James Joyce got inspiration there for Ulysses as they say, this tower must be an important Dublin attraction on the Joyce Trail.

Very interesting and also amusing that a Martello Tower originated in Corsica and so did Napoleon. I once saw an episode of Restoration Man which was about a woman who had bought one of these for a song along the English coast and even though she did'nt seem to have much money or knowledge was going to turn it into a home . She was getting frustrated by the stipulation that she couldn't put a building on top of the tower to give her a home with a view. I felt sorry for her but can understand the authorities point of view. I think .you can see the episode on U tube .

The reason a programme like Restoration Man is important is because we don't normally see anything about a building, other than its current facade and interior. Those architectural programmes on TV examine the original design of buildings, the interal and unseen designs, and any changes since.

It is very relevant that Napoleon got another look in. The martello towers on the coast of Britain and elsewhere were often built to protect AGAINST Napoleon.

You have to love blogging :) When Canada was facing ongoing battles with the USA in the early 19th century, many cities and towns needed to protect themselves quickly. What we didn't know was that they would choose the architecture that served the Italian coasts well in the mid 16th century and the English coast well in the late 18th century.