Danila Ivanovich Vassilieff (1897-1958) was born at Kagalnitskaya, near Rostov-on-Don Russia. Educated at a technical school at Novocherkassk and at a milit­ary academy in St Petersburg, Danila specialised in mechanical eng­ineering. In WW1 he served on the Eastern Front with a Cossack cavalry regiment. Then he saw action with the White forces in the Russian Civil War.

After being captured and imprisoned by the Reds at Baku in 1920, Danila escaped on a motor bike, event­ual­­ly travelling to China. Due to his wartime experiences, Vassil­ieff felt free to continue life as a womaniser; until  he married Anisia Nicolaevna at the Shanghai Russian Church in 1923.

From Shanghai the couple sailed to Australia  in 1923. In 1923 they bought a sugar-plantation near Towns­ville but in 1928 he separated from his wife and was employed on the Northern Territory railway.

In 1929 he left Australia, studying art in Brasil (1930-1) and in the West Indies and South America (1932-3). Then he spent two years in England, Spain and Portugal (1933-4), mixing with White Rus­sian ex-pats and creating a rel­ation­ship between modernist art and Russian decorative art.

During his 5 years trav­elling, the UK was where he met fel­low Russian Vladimir Polunin who was a teacher at the Slade School of Fine Art. The period emphasised Vas­silieff’s Russian heritage of strong colour.

In 1934 Vassilieff returned to Australia and became the link between Australian and European art hist­ory. Complete with his low slung Russian hat, smelly clothes and intense look, the artist became a colour­ful man. In Oct 1935 Vassil­ieff settled in Sydney, painting stormy, inner-city street scenes. Only now did enth­usiastic reviews of his work estab­lish his reput­at­ion eg scruffy children playing in workingclass suburbs, still lifes and portraits. His expres­sionist works were shown twice at the Macquarie Galleries. His biggest supporter was the famous art crit­ic Basil Burdett. 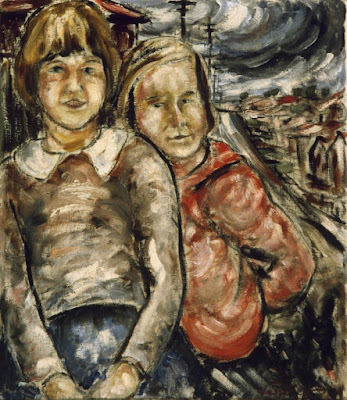 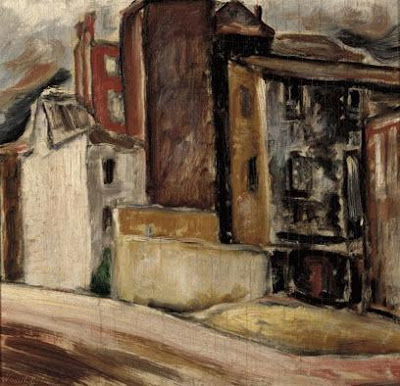 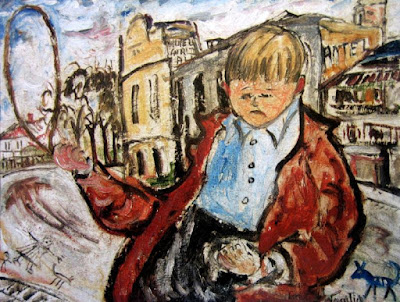 Weakening sales pushed Vassilieff away from inner city art, so he went into teaching instead. In 1939 he became the first art teacher at Clive and Janet Nield's Koornong Modern School in Warran­dyte, in outer Melbourne. Danil’s newest lover, Helen Macdon­ald, was a music teacher there. And he sang in the Russian Orthodox Church choir.

Heide was the home built around bourgeois art patrons John and Sun­d­ay Reed in the 1930s, and attracted artists Sidney Nolan, Bert Tuck­er and Joy Hester. Not far from Heide in Bul­l­­een, Danila Vassilieff created his own bohemian stone-and-log house in North Warrandyte, a home he called Stony­grad. Here he created a terraced garden with fruit trees and flow­ers, and sculp­t­ures out of local stone.

Stonygrad became a focal point for the Angry Penguins and other loc­als. In the late 1930s-40s, Danila influenced many of the younger painters who later became Austral­ia's stars - Arthur Boyd, Charles Blackman, Joy Hester and Sid Nolan.

In 1944 his relationship with Helen Macdonald ended. Vassilieff had separated from his first wife way back in 1929 but they were not div­orced until 1947. Because his art was unappreciated in Australia, he decided to sell Stonygrad and move to South Africa. In true Vas­s­il­­ieff style, he fell in love with the purchaser of Stonygrad, ac­ad­emic El­izabeth Orme Hamill. 3 months later they married and, newly inspired, the artist turn­ed to sculp­ture using lime-stone from Lilydale. 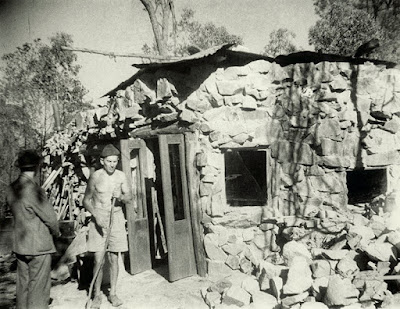 
He and Elizabeth separated and he moved first to Mildura High School and then to Swan Hill High in rural Victoria. Vassilieff was living in lodgings in both towns, earning an income, but never surviving long at any teach­ing positions. In the last months of his life he was living in a fishing hut owned by a friendly co-teacher along the Murray River. The artist had been dismissed from his last teaching job and his health was bad. He fished in the day, and at night painted the river using a small gas lamp.

His view that immediacy and message mattered more than in­tellect and aesthetics, influenced younger artists: Al­bert Tucker, Lina Bryans, Joy Hest­er and Sid­ney Nolan. He did exhibit again later at the Gallery of Contemporary Art in Mel­bourne, but now his work was not in great demand.

Sickly and slim, Vassilieff had always spoken English in a low, accented voice. As he sold few paintings, he never had any money and traded portraits for hot dinners. He also traded on his roman­tic image to get women into bed. Sadly he spent his final mon­ths in a shack near Mild­ura painting unhappy water-colours, the last in 1958.

Vassilieff died of a heart attack alongside John Reed at Heide, who stood by the artist to the end. A memorial exhib­ition of Danil’s oeuvre was held at Melbourne’s Museum of Modern Art of Australia in 1959. His work is now repr­es­ented in major Australian galleries. 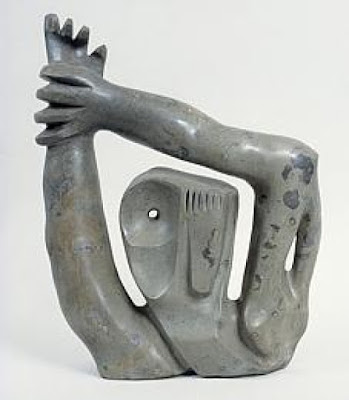 Vassilieff's biographer Felicity St John Moore published Vassilieff and His Art in 2012. Vassilieff brought a stream of Russian folk art into Australian art, as well as exciting ideas about the overlap of art and life. The bright colours ref­l­ect­ed his exuberant love of the river, its flora and fauna. Sadly, Felicity said, he divided critics and friends, thanks to a peculiarly Cossack chauv­inism, fierce anti-intellectualism, dys­funct­ion­al relationships with women and crude painterly language.

In 2012 an exhibition at Heidi examined the profound infl­uence of this artist in the hist­ory of Austr­al­­ian art. It comprised key paint­ings from the mid-1930s to mid-1940s, works on paper and sculp­ture. This project highlighted Vassil­ieff’s role in linking the expressive tradition of Russian folk art with mod­ern Australia art.

In 2015 director Richard Moore's film, The Wolf in Australian Art: Life and Art of Danila Vassilieff was based on a book published by his mother, Felicity St John Moore. She also co-curated a 2012 show at Heide that did much to restore Vas­s­ilieff to the modern public.

Koornong Experimental School seemed a bit chaotic and unplanned, so Vassilieff was a good choice as art teacher. Did he last and did the school?

Danila's relaxed, laissez-faire approach suited the school's progressive preference for "education via experience" very well. Plus his move to the bush influenced his art, residence and clothing.

But were the parents less than satisfied with their children's education? Koornong school closed in 1947.

Hello Hels, Vassilieff's paintings certainly are vibrant, although one wonders how he found time to paint them between his amorous and other pursuits. An effect of immediacy is obtained through his extreme close-ups, especially with portraits, but also with his architectural paintings. I wonder if this technique is supposed to draw the viewer in or push him away? Do you notice this in other Australian painters influenced by him?

His Stonygrad reminds me of one of those roadside attractions that seem to be typical of Nowhereville, U.S.A., which manifest the nervous urge to be continually building and creating.
--Jim

Your posts always interest me, but this one really excited me, least of all learning that Shanghai was a place for Jewish Europeans before WWII refugees. Oh, the Heidi link says that he was a notorious sex addict. Cogs were turning in my mind. There is another is another Vassileff, a ballet dancer or choreographer. Nijinsky? I wonder who you would have sympathised with in early 20C Russia? Reds or Whites?

building Stonygrad on the rural edge of a modern city in 1939 reminds me of the rural hippies who moved outside cities in the late 1960s. Vassilieff decided to go off the grid and build every item himself, starting with hand hewing the stones and creating the furniture. It looked too cave-like for my taste, but Vassilieff was very proud of his work.

By the way Grad is a suffix typically seen in Russia, for towns.

Re his influence on younger artists, it is often assumed that the state's Art Gallery was not coping well with restless students who were discontented with formal art teaching. Worse still, the Depression and the lead-up to WW2 forced the next generation of artists to fall back on their own resources. Vassilieff showed them that greater emotional effect could be inserted into their art if they rejected traditional values and techniques.

"The Whites had the stated aim of bringing about law and order and the salvation of Russia. They worked to remove Soviet organisations in White-controlled territory. The White Army was nationalistic and rejected ethnic separatism. The White Army generally believed in a united multinational Russia, and opposed separatists who wanted to create nation-states".

My grandparents were too young to have anything to do with politics before 1917, but they admired Alexander Kerensky enormously. I am sure I would have, also.

What a colourful life that man led! I think I can see why his paintings did not have popular appeal and his influence on others was probably more important than his own output. I did look at much more of his work on Google images and, when seen together, they do work better - for me at least.
CLICK HERE for Bazza’s jejune Blog ‘To Discover Ice’

From Russia, Vassilieff travelled for years through China, France, Brasil, West Indies, Spain, Britain, Spain and Portugal, as well as Australia. He had also bought a ticket to South Africa, but instead spent years within Australia travelling to Far North Queensland, New South Wales, the City of Melbourne and in rural Victoria. In between living in many countries, he married twice and had many long term romances that overlapped with each other. He worked as a painter, sculptor, teacher, fisherman, builder etc etc.

My point is that Vassilieff was a very mobile, ever changing and colourful man so I think you are right. The next generation of young artists loved his rebellious painterly language and behaviour.