Lasting only from May-Sept 1212, the Children’s Crusade was a popular religious movement in which thousands of young people took crusading vows and set out to rec­over Jerusalem from the Muslims. This was probably not as surprising an event back then, as it sounds to our ears.

Popular movements of religious fervour appeared whenever off­icial crusades were preach­ed. Preach­ing aroused mass enthusiasm, mostly in areas with a long tradition of crusad­ing, as in and around the French town of Char­tres. From the time of the First Crusade in the late C11th and cont­in­uing into the C13th, successive waves of crusading fervour swept over this region.

This was already a turbulent era. The Albig­en­sian Crusade (1209–29) was being preach­ed against the heretic­al southern Cath­ars, result­ing in strong military recruit­ment from Chart­r­es. Spain was the scene of another Crus­ad­ing crisis. A Muslim invasion from North Africa in 1210 led to the fall of Salvatierra Castle in Spain in 1211. A fearful war was ex­pected in 1212. Pope In­n­ocent III quickly coord­inated Christ­ian prayers on behalf of the threat­ened Spanish church by holding processions in Rome in May 1212.

Similar processions were held at Chartres in May where the shepherd boy Stephen of Cloyes and his fellow workers par­ticipated. This young preacher believed he’d been chos­en by Je­s­us to lead the divine mission: to lead pueri and puelle (Latin for boys and girls) to save Jerus­al­em’s Holy Sepul­ch­re. He gathered foll­owers by predicting mir­­acles eg by claiming that the Mediter­ranean Sea would part for them en route to Jerusalem! Masses of children became wild with excite­ment, dropped their ploughs and sheep, took the crusader’s vow and flocked to the rendez­vous point. 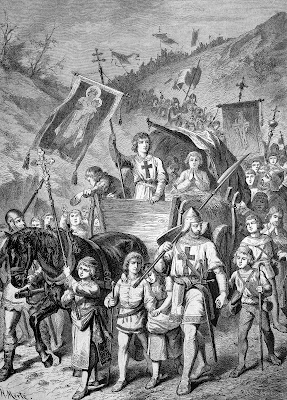 The Children's Crusade, c1875
A woodcut after a drawing by Heinrich Merte

Some adults believed the children’s movement was inspired by the Holy Spirit. Other ad­ults be­lieved that sending off 11-12 year olds was the work of the Dev­il. Some parents were so anxious for the young lives that they locked up their children in the home, to pre­v­ent their departure. [I would certainly have locked my 11 year old sons up!]

From the records of a German Child­ren’s Crus­ade, we know that some of the French children arrived in Ger­m­any in mid-July. A lad named Nicholas from Cologne DID succeed in laun­ch­ing a crusade, carrying his charismatic tau cross and leading the German pueri southward to Mainz and Speyer.

Nicholas led his c50,000 lads to go over the Alps into Italy via Piac­enza and Genoa, then onto the pope in Rome. The pope praised the children for their bravery, but stated that they were too young to crusade. From the port of Brindisi, a few thous­and young crusaders got onto ships to sail to Jerusalem .. and disappeared. Quite separately we heard that of the 7,000 German pueri who arrived in Genoa, many rem­ained because cheap labour was needed there. Only a few German children returned home to their frantic parents. 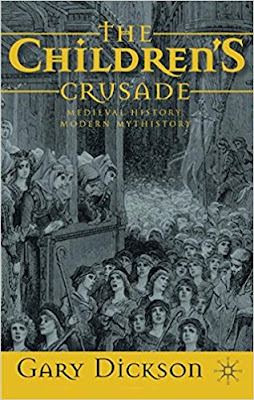 All in all, the Children’s Crusade was an utter disaster. As it was doomed to be from the beginning.

The Children's Crusade provided the strongest display of the ignor­an­ce, sup­erstition and fanatic­ism that typified the C13th. It was fil­l­ed with a holiness that was prepared to sac­rifice innoc­ent child­ren, in obedience to the will of God. In one sense the event marked the culmination of the Crusades, con­firming Pope Inn­oc­ent III’s belief that crusading would continue - with the 5th Crusade (1218).

Yet it also represented the decline of the Crusades. Innoc­ent III had already planned a crusade to recapture Jerusalem; in 1213 and 1215 he issued papal bulls calling on Christians to join in. The eventual failure of this 5th Crusade predicted the end. In 1270-2 the 8th and 9th Crus­ades failed totally; the mainland Crusader states ended with the fall of Trip­oli (1289) and Acre (1291).

Gary Dickson noted that 1212 was a year of great fervour, due to recruit­ing for the Al­big­ensian Crusade. Yet the Chil­d­ren’s Crusade was of­f­­ic­ially never called by Pope Innocent III (1198–1216). Thus it was an unsanct­ioned “pop­ular move­­ment”, whose start and end were hard to pin down.  Were the pueri really pre-teens? In fact many of the participants could have belong­ed to the impoverished peasant class or day lab­ourers. Yet the chronicl­ers emphasised the youthfulness of the par­ticipants, probably because the young people were the most visible, and unusual.

Although 50 versions of the story have been found in chron­ic­les dating back to the mid C13th, the true facts were always un­cer­­tain. Mentions were often very short, or mythologised. A Laon re­port noted that Stephen of Cloyes was instructed by a poor pil­grim to deliver letters to French King Philip II. Nothing was rec­orded about the contents of these letters, if indeed they existed, nor of any meet­ing with the king - only that the king ordered the pueri to disperse. 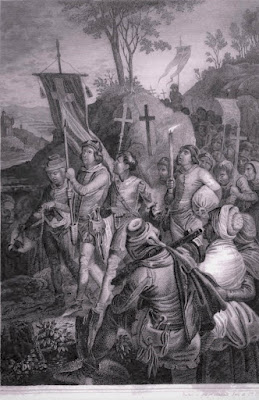 I can easily imagine the excitement that these self-proclaimed, unarmed Crus­ad­ers evoked when they planned to regain Jerusalem and recover the True Cross. So des­pite the very short amount of time taken up by the children’s crusading movement, interest in the story continued over the centuries. Count­less children’s books were writ­t­en in later generations. Highly romanticised illustrations of the Children’s Crusade were still being published in prints and books, especially in the 18th and 19th centuries.

Hello Hels, I never like it when children get fired up over some idealistic goal, whether religious or political. The word maturity means that you have lived long enough to gain perspective and to make up your own mind. Although it is true enough that many adults are not mature, that is almost universally the case with children who are nevertheless easily inflamed and led. Children with strong opinions about complex issues always seem to have absorbed their ideas wholesale from evangelizing (or controlling) adults. This seems true for every case from children preachers or mini-Republicans or Democrats, to the scary Hitler Youth.
--Jim

That is so true and not just regarding religious idealism. I asked my grandfather why he was so passionate about the Russian Revolution, even though he was underage. His life was so crappy and the Revolution was so exciting, that he lied about his age to get involved.

That may have been true for 12 year olds in France and Germany with hard labour and crappy jobs in 1212.

Did any of the children actually get to the Holy Land safely? If yes, what happened to them?

I am not confident of any report but here is what Christianity.com had to say.

It seems that many of Stephan's French children died of hunger and disease before ever reaching Marseilles. Those who arrived stood patiently on the shore and waited for the sea to part. When it did not, they filled seven ships and set sail. Two ships sank, drowning all aboard. The remaining five sailed to North Africa where the children were sold into slavery. The Germans died by the tens of thousands in the Alps. Whether by disease, starvation, exposure or violence, few survived the journey. Some arrived in Genoa where they faced a similar fate to their French counterparts. Others marched on to Rome, while yet other groups appeared on Italy's eastern coast where they drowned in more shipwrecks. Today, a collapsing, unattended shrine marks the spot where the bodies of these had floated back to shore. Some of the children tried to find their way home. The chroniclers report that many of these were attacked, beaten and murdered for having failed in their faith!

But no mention of any child reaching the Holy Land.

It's interesting that in Gustave Doré's etching the children look like adults or, at least. like adolescences. Belief has a powerful influence on the human mind, which I suppose, is that, unlike animals, humans have the capability of a rich imagination. I am sure that there were some parents who pushed their offspring into joining the Children's Crusade.
CLICK HERE for Bazza’s mostly harmless Blog ‘To Discover Ice’

PS: I watched Ridley Scott's magnificent Kingdom of Heaven last night. At the end it noted that, nearly one thousand years after the depicted events, the situation of Jerusalem was pretty much still the same......

since the Children's Crusade was at the beginning of the 13th century, I too wonder about our rich imagination. Especially since there were few detailed, reliable and contemporary chronicles. So by the time Gustave Doré was creating his romanticised illustrations of the Children’s Crusade in 1877, the story seemed all romance and very little history. I would not have been surprised to see images of French and German children capturing the Holy Land for the Church! Not by weapons, but by the power of Je­s­us in leading His divine mission.

Excellent reference thank you, even though I might not "enjoy" Kingdom of Heaven because of the endless killing. But 1184 was an important era to absorb ourselves in, not very long after the Second Crusade ended (1147–1149) and not very long before the Muslim recapture of Jerusalem. I am sure that the values that motivated Christians in Kingdom of Heaven era will readily explain the values that motivated families during the Children's Crusade.

Although I have read much about the crusades, this is one crusade that I had not heard about before.

when I was at Uni, the Professor of Art History happened to have been a medievalist. If she had been more interested in, say, Impressionism, I too would not have known so much about the crusades either, especially the children's crusade.

Our knowledge base is often serendipitous.

Really reminds me of ISIS recruiting . Kids are vulnerable , full of fervour and idealism and no experience . So Sad , such a waste of potential. It would be interesting to know what happened to their leaders ,

Yes indeed. children don't learn to look at the long term consequences of their decisions until they are about 16; all thinking before then is self centred and focused on the present. So I agree that 11 and 12 year olds responded to the call for a religious crusade with mindless passion.

But ISIS recruiting works still works today in _exactly_ the same way! They go after 11 and 12 year olds because young children don't have the intellectual or emotional maturity to make good decisions about The Cause.