The women’s suffrage movement in Britain had been fractured in 1903. This was when Emmeline Pankhurst led a break­away group from the Nat­ional Union of Women’s Suffrage Societ­ies, arguing that it had become too content waiting for male approval, rather than actively demanding women’s rights. The militant Women’s Social and Political Union, run by the Pankhursts, had begun disrupting political meetings attended by prominent MPs. The suffragettes’ tact­ics reawakened public interest in the issue, but the Pankhursts were often seen as overly autocratic.

Robert Wainwright* wrote of a young actress named Muriel ­Matters (1877-1969) who grew up in South Australia. The art of elocution back then required its exp­on­ents to weave a tale onstage, often set to music or poetry. Muriel trained with Lionel Logue, a family friend who later helped the stuttering King George VI.

From an Australian state where women got the vote in 1894, Mur­iel arr­ived in London with little money, some let­ters of intro­d­uct­ion and dreams to become a West End star. At 28 Mur­iel was an intell­ect­ual, reinforced by other intellectuals who im­bued her with soc­ial­ist ideals. Two people were important in encour­aging Muriel’s radical thinking – a] British jour­nalist WT Stead and b] Peter Prince Kropotkin, exiled Rus­s­ian revol­ut­ionary, who persuaded her to use her orat­ory skills “for the greater good”.

Muriel’s new direction emerged when she joined the Women's Free­dom League/WFL. She led a campaign to protect young female act­resses and stagehands from exploitation at the hands of low-paying, pred­atory agents and production com­panies. Her enthus­iasm, eloquence and magical voice had to be used for the cause. Muriel’s magnetism, the WFL committee agreed, would be wasted if she was just speaking in town halls to the converted. 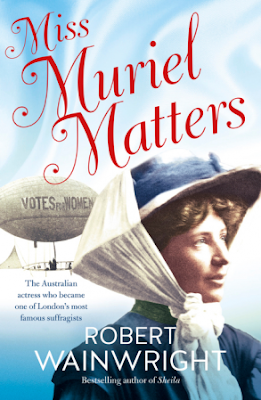 Robert Wainwright's 2017 book
Miss Muriel Matters: .... One of Lond­on’s Most Famous Suffragists
Note the "Votes for Women" airship in the background

Instead she needed to do mobile recruitment, talking in regional areas. In 1908, Muriel travelled on a horse-drawn caravan from town to town, speak­ing in halls and fields, standing on town mem­orials to speak to hundreds of listeners. Unfortunately she had to be flanked by police, given the attendant male violence.

Womens’ Sunday was the first monster meeting to be organised by the Women's Social and Political Union. Specially chartered trains transported suffragettes from across Britain to march in proces­s­ions through central London, rallying in Hyde Park. Platforms were erected for 80 speakers to address the crowds; 300,000-500,000 saw the delegates dressed in the suffragette tricolour and carrying embroidered banners.

How appropriate that another Australian, artist Dora Meeson, was an active member of the Brit­ish Artists' Suffrage League. Dora designed and painted the banner used in the 1908 parade. It depicted a young woman personify­ing Australia, implor­ing a mature woman repres­enting Britain.

Parliament became the focus of suffragist protest and the WFL were looking for a high-profile statement. They created a series of pro­tests out­side Parliament, to divert att­ention from the pro­­t­est­ers in­side; Muriel would be their non-violent champion and leader.

In Oct 1908 Muriel brought a chain into the House of Commons under her dress. Just as the MPs start­ed deb­ating a fin­ance bill, Muriel locked her­self to the iron grille in the lad­ies' gallery, used to obs­cure the wom­en’s view of parliamentary de­bates. After her speech about women's rights and still att­ached to the grille, Muriel was charged with disorderly conduct and gaoled in Holl­oway.

In Feb 1909 Muriel Matters was hoisted into a wicker basket beneath an air­ship. The basket was loaded up with WFL leaflets, to be dropped over King Edward VII as his golden carriage moved down The Mall. But the wind conditions and the primitive balloon-motor ensured she never made it to West­minster. Never­theless her exploit created headlines in newspapers everywhere, as she recalled in a wonderful speech. 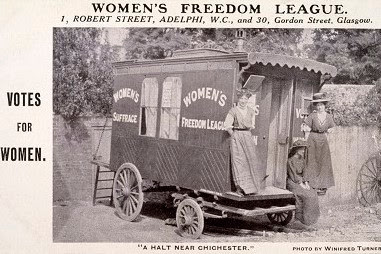 In 1910 Muriel returned to Australia and lectured about feminism and socialism. With another Austral­ian, Vida Goldstein, Muriel secured a res­olution from the Australian Senate to the British prime minister, celebrating the enfranch­isement of Australian women.

She returned to Britain and broadened her invol­ve­ment from suf­frage .. to impoverished families. For the next two years she lived in the grim slums of London’s Lambeth as a jour­n­alist, writing for a ­Christian newspaper. She contin­ued making speeches and became involved in ­Ireland and Scotland’s indus­t­rial tur­moil. She criticised sweat shops and advocated women's unions, equal divorce laws, equal pay and support for unmarried mothers.

So why was the remarkable Muriel Matters not hugely famous? Part of her problem in Australia was that white women in Aust­ralia already had the vote and had moved on. Plus we have to assume that the Australian press was largely conser­vative during Matt­ers’ life here. Editors might have been offended by coverage of an unknown Australian woman’s attack on Mother Britain. We all know about the colonial cringe ☹

Even in Britain, Muriel Matters faced a few problems. Firstly she was from the colonies, not a real Brit. Secondly she was not one of the Pankhurst People. Third­ly she was against WW1, much to the horror of many suffragettes. Finally she married a div­orc­ed man who possibly left his wife for her. Scandal!

With WW1 in 1914, Muriel Matters became a pro­m­inent pacifist. This slim and vivacious woman with a mass of golden hair turned down mar­riage proposals from divor­c­ed Bostonian dentist Dr Wil­l­iam Porter, then finally mar­r­ied him in London. Marriage did not divert her att­ention tot­al­ly; she still organised a nat­ional conference of women in London to discuss peace and disarmament.

Muriel had to spend energy on early child­hood educ­ation. In 1916 she attended a training course by It­al­ian educ­at­ionalist Dr Maria Montessori in Barcelona, and soon this new child free disciple opened an early British Montessori school.

At the behest of the prime minister, Ramsay MacDonald, Ms Matt­ers unsuccessfully stood as a Labour candidate for Hastings in 1924. Nonetheless full suffrage for British women was finally granted in 1928. After retirement Muriel moved to ­Hastings, until her death in 1969, at 92.

*This excellent book is Miss Muriel Matters: The Australian Actress Who Became One of Lond­on’s Most Famous Suffragists by Robert Wainwright (ABC Books, 2017). Or see an ABC 2015 docudrama called Muriel Matters!

Hello Hels, This is a fascinating story of a heroine of whom I knew nothing. I wondered whether she had made any recordings, as during that period it was popular to record political speeches. I found only the following record of her beautifully trained voice, supposedly her only recording, of a quite marvelous speech recalling her airship-leaflet caper:

we normally think of actresses and models as well trained, attractive women with not a brain between them. Muriel Matters was not just well educated but she used her skills for the social and political issues that mattered to her (no pun intended).

I will add the the clip you gave me, thanks. I was delighted to hear her voice - the ABC docudrama was excellent because it used her words, but spoken by a 2015 actress. Muriel's accent sounded British but with some soft Australian vowels.

It seems she had a real talent for publicity. However, not self publicity perhaps. I had not heard of her and I don't know why she is not better known.

And Adela Pankhurst came here. In the swap, Britain did better.

Like Parnassus, above, I had not heard of Muriel Matters until now. I found the Dora Meeson poster where Australia is imploring Britannia to "Trust the women mother, as I have done". https://www.wikitree.com/photo.php/c/cc/Meeson-6-1.jpg
Hers is a wonderful story that someone should make into a feature film. And to think that as if her life wasn't struggle enough she had to endure the faded gentility of Hastings until she was 92. Poor lady!
CLICK HERE for Bazza’s ethereal Blog ‘To Discover Ice’

PS: I hadn't heard of the Cultural Cringe - well I wouldn't would I, living in the UK? Sounds like cultural hegemony to me.

me too. I had read quite a lot about the history of the women's suffrage movements in Britain and Australia and, until the ABC broadcast its docudrama two years ago, I had never even seen Muriel Matter's name in print.

But that is often the way in historical studies. The artist El Greco died in Toledo in 1614, deeply in debt and as a foreigner who spoke poor Spanish. His name was unknown until the French artists RE-discovered him after 1900. Now he is arguably the most easily recognised artist on the planet.

Cultural exchange was important, but Adela Pankhurst was at best an ambivalent role model for the women's movement. She was "sent to the colonies" in 1914 to work hard for women, socialism and the peace movement, and she did.

But in the late 1930s Adela became a Fascist, pro-Nazi, anti-Semitic and an organiser for Australia First, the nasty pro-Japanese party. She was gaoled as a traitor in 1942, just like the British suffragettes had been in Edwardian times.

Agreed. I mentioned the Dora Meeson banner in the post for a reason that is still being clarified in my mind. Although the 1908 mass meeting in London's Hyde Park was for British women, Meeson was another Australian who migrated back to Britain and became a member of the British Artists' Suffrage League. I loved her.

Post-colonial cultural cringe, in countries like Australia and New Zealand, was an internalised inferiority complex at a national level. It caused the locals to dismiss their own cultural thoughts and practices as inferior to that of the Motherland - Britain.

How ironic that Australia and New Zealand led the world in women's suffrage!
http://melbourneblogger.blogspot.com.au/2017/12/first-women-in-world-to-be-enfranchised.html