King Charles II: Art and Power at the Queen’s Gall­ery

After over a decade of austere Cromwellian rule, the restorat­ion of the monarchy in 1660 led to a resurgence of the arts in England. The court of King Charles II ((1630-85) became the centre for the pat­ronage of leading artists and the collecting of great works of art, which served a) as decoration for the royal apart­ments and b) to glorify the restored monarchy and rein­force Charles’ position as the rightful king. Now an exh­ibition called Charles II: Art and Power at the Queen’s Gall­ery is on at Buckingham Palace, until 13th May 2018.

In May 1660 Charles II made his triumphant return to the thrones of England and Ireland, end­ing a dec­ade of republican Commonwealth under Oliver Cromwell. After 14 years in exile, Charles II was keenly aware of the im­p­­ortance of princely tradition and magnificent display in en­for­cing his right to the throne and his position as Head of the Ch­urch.

He ordered royal regalia and crown jewels to repl­ace those sold off or melted down by Parliament, and his coron­ation in April 1661 was the most extravagant since that of El­iz­abeth I. See the stunning altar plate in West­min­­ster Abbey, including the silver-gilt alms dish by Henry Green­­­way, a metre in diamet­er, and a solid-gold chalice and gold paten.

Charles planned to regain legitimacy, amongst other ways, by re-claiming his fath­er’s fabulous art collection. Although the royal resid­en­ces had survived the Civil War largely undisturbed, the Common­wealth government had sold off much of their contents. Par­liament commanded that all persons holding goods formerly bel­ong­ing to Charles I, Queen Henrietta Maria or the new king were to return them with imm­ed­iate eff­ect. This order was later made leg­ally binding through the 1660 Act of Indemnity and Oblivion. 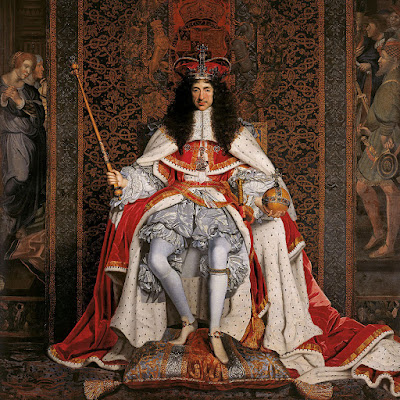 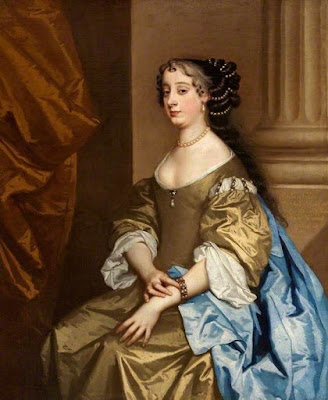 Barbara Villiers, Countess of Castlem­aine and Cleveland,
by Peter Lely

Charles II had placed an order for a large group of paintings from the dealer who had sold works to his father in the 1630s. Among these were Pieter Bruegel the Eld­er's The Mass­acre of the Innocents c1565–67 and Georges de la Tour's St Jerome c1621–3. In the same year the King was pres­ented with great paintings, sculp­ture and furniture by the States of Holland and West Fries­land. And, to strengthen the alliance between the two countries and to discourage Char­les II from agreeing to a treaty with his cousin Louis XIV, they sent Paolo Veron­ese's Mystic Marriage of St Catherine of Alexandria c1562–69 and Titian’s Mad­onna and Child in a Landscape with Tobias and the Angel c1535–40.

Having grown up surrounded by his father’s art collection, Char­les II knew that paintings promoted pleasure and decoration, and also promoted the king’s power. Soon after his return to Eng­land, he appointed the portraitist Sir Peter Lely as official Limner and Picture Drawer. Lely was seen as the natural successor to Van Dyck, the first holder of the post established by Charles I. The miniaturist Samuel Cooper became Royal Picture Maker in 1672. In 1674 Italian Antonio Verrio, who had assisted the artist Charles Le Brun at Versailles, was commissioned to decorate the newly built State Apartments at Windsor Castle.

The two great groups of drawings (by Hans Holbein II and Leonardo da Vinci) that came to King Charles came from Thomas Howard 14th Earl of Arundel, the first signif­icant English collector of drawings. They were gifted in thanks for the restitution of the noble family’s lands.

Charles II's new court style was influenced by the lux­urious French fashions he had seen at Louis XIV’s court when his exile started. His royal apartments at White­hall Pal­ace were filled with elaborate decorative arts, including tap­es­tries woven in Parisian workshops and silver furniture in the French taste. The royal palaces were the setting for lavish masques and balls attended by poets, writers, scientists, act­ors and beautiful women, several of whom were painted by Sir Peter Lely in a ser­ies of Windsor Beauties, including portraits of the King's mis­tress Barbara Villiers, Countess of Castlem­aine and Cleveland.

An image of the restored monarchy was painted by John Michael Wright in c1661. The King wore St Edward’s crown and parliam­ent­ary robes over the Garter costume, and he carried an orb and sceptre which were made specially for the. as the earlier reg­al­ia had been destroyed during the Interregnum. The King is seat­ed in front of a tapestry apparently representing the Judgment of Solomon, which may allude to the king’s wisdom.

The gallery is displaying artefacts from the King’s Touch Cerem­ony in which each monarch touched tens of thousands of members of the public suffering from scrofula. God would cure the unsightly swelling disease VIA the Royal touch. The weekly ritual had bec­ome so popular that the palace was com­pelled to issue tokens to tens of thousands of scrofula sufferers, proving they had been blessed by the King’s hand. See the 1662 “Pro­cl­amation for the better ordering of those who repair to the Court for their Cure of the Disease called the Kings-Evil”. 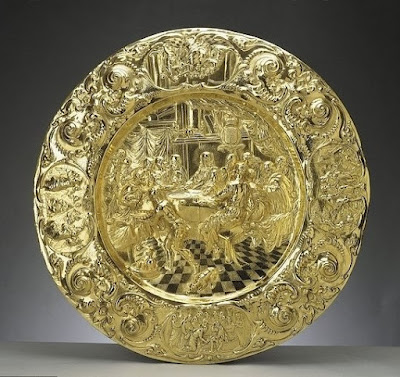 silver-gilt alms dish by Henry Green­­­way, 1660
embossed with The Last Supper and the royal Stuart arms

The exhibition also shows how the king used science to build his reputation, countering the traditional view of Charles II as the Merrie Monarch who loved women, pleasure, parties, horse racing, yachting and theat­re. Clearly patronage of these popular pastimes was a sure way to gain the support of the country, and to enjoy himself. By contrast, science was a source of intellectual fascination for Charles II, a tool for improving the navy and milit­ary, and a way of identif­ying himself with other powerful European princely patrons of science. In 1660 he founded the Royal Soc­iety which included other great scientific minds like ast­ronomer Edmund Halley, who worked from the newly established Royal Observ­at­ory in Greenwich. And Isaac Newton.

My English history knowledge is very poor. England in the 1600s was republic! So Cromwell must have been anti royal.

Andrew: To say that Cromwell was anti-royal is a massive understatement! He was a religious puritan and was a signatory to the death warrant of Charles I.

Barbara Villiers looked beautiful in her Lely portrait, but I am not certain that she was very popular in court. Charles had a lot of mistresses.

b] The Civil War between Parliamentarians/Roundheads and Royalists/Cavaliers continued on off for years, finally ending with Parliamentarian victory in battle. The dead king's son was exiled to the Continent and in place of the monarchy, the Commonwealth of England and then the Protectorate under Oliver Cromwell and then his son Richard ruled (1649–1659).

c] Parliament met in early 1660, King Charles II returned from exile in May 1660 and the monarchy was restored for ever (I think). So although the republic seemed to have a large impact, it really only lasted a short time.

the only thing I would debate is whether Oliver Cromwell was a critical signatory to the death warrant of Charles I. Cromwell certainly was a leader of the New Model Army in the second English civil war, helped repel the Royalist invasion of Scotland, and was a cause for Charles to surrender to a Scottish army. But when Charles was tried by the high court, he was convicted of treason and sentenced to death by 59 judges. Cromwell was just one of the 59.

Now not to gossip, but Barbara Villiers was a hottie!!! She was born into a noble, Royalist family, her father being part of Charles I's army. Even when King Charles I was executed, her family remained loyal to the Prince of Wales, exiled into France. And she married into another Royalist family.

But when the newly crowned King Charles II came to the throne, he had the gorgeous, sexy Barbara in bed almost instantly. She was rewarded with lots of King Charles' babies, a great position in court and a noble title for her husband.

I imagine that after the bleak puritan years, King Charles II wanted to encourage poetry, journalism, novels and especially plays. Even the honour of naming a man of letters as Poet Laureate emerged again into the sunshine.

Charles was an over sexed prat who spent money on himself rather than on the nation.

that was true for every royal, nobleman, cardinal, landowner and banker since time immemorial :(

Charles II and his supporters lived in France and The Netherlands, and learned to love European flamboyant styles. After the Restoration, artists from the continent moved over the Channel to work in England.

Did all the Restoration riches move into public galleries and royal palaces so that the nation could enjoy them? I hope so.

Before people visit the King Charles II exhibition, I would like to create a link to London Historians' Blog post on his father, King Charles I
https://londonhistorians.wordpress.com/2018/01/23/charles-i-king-and-connoisseur/

This week is the anniversary of the execution of Charles I in 1649 on a scaffold outside his beloved Banqueting House, the ceiling of which he commissioned Rubens to decorate with a paean to his father, James I, strongly emphasising the divine right of kings. The new exhibition at the Royal Academy: "Charles I: King and Collector" opens on Saturday and runs until 15 April.

Apart from literature and to a lesser extent architecture and fashion, England lagged horribly behind Europe when it came to the visual arts, in the case of Italy by over a century. Charles set out to change all that. Having been exposed to the collection of Philip IV of Spain on a visit in 1623 the then Prince of Wales was hooked. The Spanish king gave him century-old portrait of his ancestor the Emperor Charles V by Titian – a spectacular gift. This painting features in the exhibition, next to the famous Velázquez portrait of Philip. Charles immediately became a serious collector, determined to have a collection the equal of any European prince. Among his many acquisitions he scooped up almost the entire collection of the once mighty Gonzaga family of Mantua.

Display is important. For a show of such scale, this allows absorption of the narrative at leisurely pace. Charles I came to power at a time when the presence of art, let alone its production, was relatively scarce: only a century before, the English Reformation under Henry VIII had instigated a mass cull of images and image-making.

An Art Collection Fit for an Executed King
in Hyperallergic

many thanks. I hope the same is true for the Charles II: Art and Power Exhibition. If his court became the centre for the pat­ronage of leading artists and the collecting of great works of art, an even more leisurely pace will be essential.