When a new home for the Museum of Manufactures and the Government School of Design had to be found in South Kensington, they used the estate bought by the 1851 Great Exhib­ition's commissioners. The Museum, later the Victoria & Albert, was established in 1852 with 3 founding principles i.e to make works of art available to all; to educate working people; and to inspire British designers and manufacturers. All plans had to be approved by Prince Albert, including approval for Sir Henry Cole (1808–82) to become first V & A Director. The financial surplus from the Great Exhibition went to the V & A!

The western­ most dining room in the V & A, originally called the Green Dining Room and now the Morris Room, was designed by William Morris him­self. The subdued colours of the scheme show that at the time he was still under the influence of the Gothic Re­vival. He dec­or­ated the walls with panelling below the green plaster, and a low relief of olive branches. William Morris had been Pre-Raphaelite friends with Philip Webb, Edward Burne-Jones and Dante Gabriel Rossetti, and in 1861, they all became partners in the interior decorating and furnishing business. Thus the stained-glass windows bore female figures painted by Edward Burne-Jones and Philip Webb.

The Museum bought some stained glass from Morris, Marshall & Faulkner Co. and, along with the ceiling and panelled dados, the work was finished in 1868–9. Burne Jones' figure-panels in the dado, which were completed soon after, were based on the signs of the zodiac, and his windows designs showed medieval domestic tasks. The rest of the decoration was by Morris' friend, architect Philip Webb. 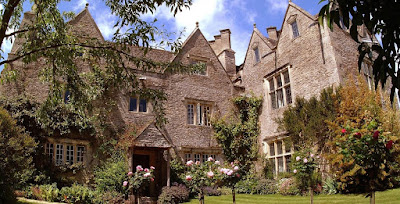 "The Building News" in 1870 found the rooms cheerful, like the gaily-adorned cafés of Paris. But after Cole's retirement in 1873, his planned building programme stopped. It was only in 1889 that public opinion demanded that the building of the Museum be com­p­leted. The facades of the Victoria and Albert Mus­eum built in 1899-1909 displayed the museum as a treasure house of priceless objects in marble halls. The lavishly decorated, historic refreshment rooms that stunned and delighted visitors in the Victorian era were way beyond my personal taste. But as works of Victorian art in their own right, they are well worth visiting.

Now to Kelmscott Manor in Gloucestershire which was a C17th, Grade 1 listed Manor house on the River Thames. Having discovered it when writ­er, designer and scholar William Morris (1834–96) rowed from London to Oxfordshire, Kelmscott became Morris’ summer country home from 1871 on, just a couple of years after his V & A restaurant was completed. Dante Gabriel Rossetti, the Pre-Raphaelite artist and Jane Morris’ lover, was a co-tenant for the first 3 years.

The evocative loveliness of the countryside released a new creative talent in both men. Just as Jane's face inspired Rossetti's most pow­erful art, Morris found his inspiration in the architecture, beautiful native wildflowers, barns, dovecote, meadows, fauna and stream of Kelmscott had a profound effect on the develop­ment of Morris’ art-ideology. The unspoiled nature of the house's archit­ecture and its natural relation­ship with the garden was important, as was the house’s close harmony with the village and the surr­ound­ing country­side. The Manor was in the painting Water Willow (1871), a portrait of Jane Morris that painted by Dante Gabriel Rossetti at the very beginning of Morris ownership. Local willows translated into his famous Willow Pattern whilst the movement of the river and vines led to the flowing patterns of his carpets & fabric designs.

Daughter May Morris died in 1938 and bequeathed the house to Oxford Uni, on condition that the contents were preserved and visitors were granted access. The University could not, so the estate was passed to the Society of Antiquaries in 1962. Both generations of the family, William and Jane Morris, and Jenny and May, were buried in the grounds of nearby St George's church. 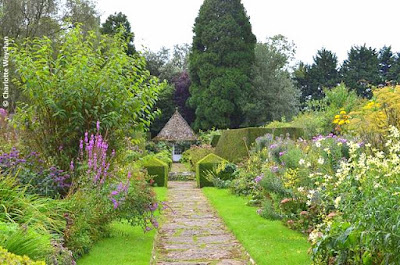 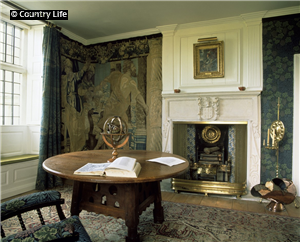 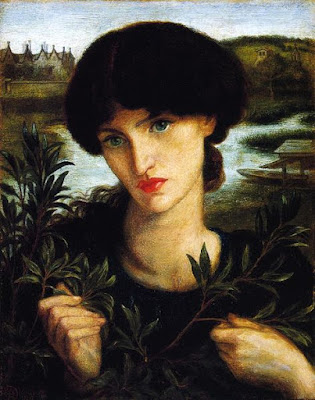 Water Willow, a portrait of Jane Morris
painted by Dante Gabriel Rossetti in 1871
Note Kelmscott Manor in the background

The internal decor today is still largely that of Morris, and includes many of his textile patterns, furniture, carpets, ceramics and metalwork. There is a display of his textile designs in the converted loft, originally used by farm labourers. The main bedroom still has many of William’s original books, and a collection of medieval prints. There is also a fine collection of the works of Morris’ associates including William Benson, Edward Burne-Jones, DG Rossetti and Phillip Webb.

The property is normally open to the public during the summer. But recently The Society of Antiquaries of London received a £4.7 mil grant from the Heritage Lottery Fund for substantial renovations.

When we looked at the main World Fairs that had been arranged since 1851, I don't remember too many examples of recycling. Buildings were often pulled down and contents were often sold.

On the other hand, saving objects for the V & A seemed like a cool idea.

Hello Hels, In the Cleveland Museum of Art, the eating areas were mostly utilitarian, so I never thought of investigating the restaurants in other museums, especially since I would rather spend time looking than eating. However, it does not surprise me that in the V&A, which is so beautiful in every respect, the dining rooms would be works of art in themselves. Since a return trip to the V&A is definitely on my list, I'll plan to spend some more time there investigating these rooms.
--Jim

I remember the lectures too. France had held manufacturing exhibitions earlier, but nothing was as impressive and as global as Crystal Palace in 1851. As you noted, there was an agreement to pull down the exhibition buildings in most cities after six months, so they were built to be easily dismantled. Thank goodness the Exhibition Buildings in Melbourne are still beautifully intact.

Many of the British objects from Crystal Palace were used as the first collection for the South Kensington Museum/V&A which opened in 1857. I wonder what happened to the displays and products from overseas countries.

Since the V & A calls itself the world's leading museum of art and design, it became very appropriate to display great design at every opportunity. The Gamble, Poynter and Morris Rooms are the three interlinked rooms that have perfectly tasty lunches and afternoon teas. But I suspect the museum actually wanted visitors to learn from the decorative arts chosen by William Morris and his colleagues. There is nothing like absorbing education in situ :)

Leah and I find the V and A to be our favourite London Museum. She gets a new Membership on her Birthday every year (from me)! They have just opened the new members dining room - haven't seen it yet but hope to soon. The building is worth going to see just for itself.
CLICK HERE for Bazza’s seasonally adjusted Blog ‘To Discover Ice’

Intriguing. I like the V&A on the whole - not sure whether the building is lovely or impressive, or both - but I wouldn't want to live in it anyway. More importantly, I didn't get to the Pink Floyd Exhibition..!

The members' dining room, just opened in September, does not reflect high Victorian art because Aston Webb’s wing was built just before WW1. From the photos, what stands out are the glass panels down the centre of the gallery for natural light, the parquet flooring, one long terrazzo bar and dark 1930s furniture.

We have membership of our NGV in Melbourne so presumably we would enjoy reciprocal rights for the V & A in London. I will check that out.

The V & A blog mentioned hugely popular exhibitions such as David Bowie Is, Alexander McQueen: Savage Beauty and Pink Floyd: Their Mortal Remains. But we can't always get what we want.

However I did! The V & A's silver art collection examines the development of European styles and skills, and shows the stunning work of Huguenot silversmiths who fled France after the Revocation of the Edict of Nantes (1685).

Thanks for all your efforts that you have put in this, It's very interesting Blog...
I believe there are many who feel the same satisfaction as I read this article!
I hope you will continue to have such articles to share with everyone!
บุนเดสลีกา

Thank you. Did you get the chance to visit the V & A? What was your impression?

For detailed information on the three V & A restaurants, see
https://melbourneblogger.blogspot.com/2017/09/william-morris-edward-poynter-edward.html