For those of you who remember 1956 clearly, Australian television expos­ed Annie Oakley (1860-1926) for the first time in a fictional American Western series. Featuring act­ress Gail Davis, each weekly programme lasted half an hour. My parents didn’t have a tv in the 1950s, but our elderly neighbours let the local children watch between 7-7.30 PM.

Thank you Wild West Magazine for the historical data.

Early Family life
Phoebe Ann Moses was born to Jacob and Susan, Quakers who had migrat­ed from Pennsylvania to a farm in rural Darke County Ohio. Annie was the sixth of their seven children. In 1866 her father died, leaving her mother and the seven young children in poverty, so mother sent Annie to the live at the Darke County Infirmary/poor house.

At 10 Annie become a servant for another local farming family. She stayed with them in dismal conditions for two years before running away, then she returned home to her mother, again in poverty.

Annie did not live in the West but she first fired a gun at an early age. She ended up supporting her own family by hunting and trapping pheasants and quail, then selling the game to locals in Green­ville Ohio and to hotels. 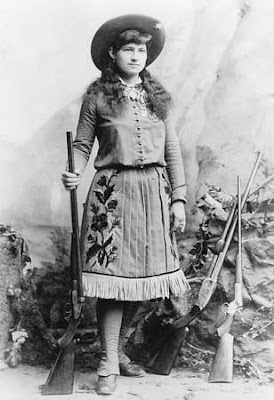 Annie Oakley as a teenager

Marriage and career
Annie met Frank Butler while he performed his travelling marks­man show in Cincinnati. Part of Frank’s act was accept­ing chall­enges from local marks-men, with bets being placed. Frank knew he was a beaten man, the moment the 15-year-old girl appeared to challenged him.They began a courtship and married in Windsor Canada in 1882. The Butlers began performing together, but Frank imm­ediately recognised that his wife, now called Annie Oak­ley, was the bigger draw.

In the early days of her stage career, Annie played with Frank at small theatres, skating rinks and circuses. While working for the Sells Brothers Circus in New Orleans in 1884, Annie and Frank met William Buffalo Bill Cody and performed with them for 16 seasons. Cody had her perform early in the show to help aud­iences get used to the sound of gunfire. She could shoot a cork out of a bottle at a distance!

In 1884, Sioux spiritual leader and medicine man Sitting Bull, victor at the Battle of Little Bighorn, saw Annie in a theatre in St Paul Minnesota. Sitting Bull and Annie were happily reunited the next year as employees of Cody’s Wild West.
In 1887, Buffalo Bill’s Wild West Show travelled to London, as part of the USA delegation to Queen Victoria’s Golden Jubilee. The show stayed in London until Oct, giv­ing 300+ performances that helped Annie perfect her show­manship. The British newspapers went wild.

When Annie and Frank left the Wild West Show in Dec 1888, she worked as an actress in a Western melodrama called Dead­wood Dick. The play was not a success, and by Feb 1889 the theatre company had folded.

In mid-1889, they re-joined the Wild West Show for a tour of Eur­ope, beginning with Paris’ Exposition Universelle. Having no children, they toured Eur­ope whenever they wanted, including two more European tours in 1891-1892.

Annie was a celebrity, earning more than other employees in Buff­alo Bill’s Wild West Show. They bought a house in Nutley N.J in which they lived be­tween their country-wide tours.

In 1894, Buffalo Bill Cody, Annie Oakley and the Indians perf­orm­ed in front of Thomas Edison’s moving-picture machine at the invent­or’s labor­at­ory in New Jersey. The public could go to kinetoscope parlours and cheaply view the early Edison films in peep-show machines. Anne was the first cowgirl in motion pictures, surrounded by faked gun smoke.

Annie and Frank toured with vaudeville impresario Tony Pastor’s show in the spring of 1888. Then they re-joined Buffalo Bill for a spring run in Paris. At first the French thought Buffalo Bill’s whole spect­acle was faked, but when they saw Annie Oakley perform, they believed she was the real thing. 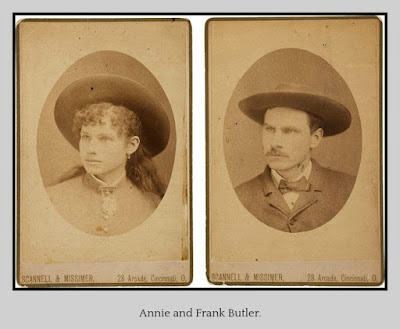 Retirement, 1901-26
In Oct 1901 in NC, while the Company was headed to Danville Virginia to end the season, their train ran into an on­coming train. Annie Oak­ley was found pinned beneath the rubble and it took sev­eral hours be­fore she could be rescued. After touring continuously for 20 years, she retired from Buffalo Bill’s Wild West Show.

Annie Oakley tried acting again, appearing as the lead in a play called The Western Girl, which opened in New Jersey in Nov 1902. She also taught shooting at exclusive gun clubs. Meanwhile her husband worked for the Union Metallic Cartridge Company, promoting its products to shooters.

In 1912, Frank and Annie had begun building a retirement house in Cambridge Maryland where hunting and shooting remained a big part of their lives. The roof of the house was designed so that Annie could step out onto it and shoot game off the Choptank River.

In 1922 Annie performed in a show on Long Island and was rumoured to be making a comeback, but in Nov, at 62, she was in a car accident in Florida and broke bones. Fortunately the steel leg brace she wore did not immobilise her.

As a star with the stature and ability of Buff­alo Bill himself, Annie Oakley valued her platform to promote egal­itarian views about women. She believed that women needed to learn to be proficient with fire­arms, to defend themselves. Annie taught 15,000 women to shoot, and promoted guns as a symbol of female empowerment. [I love her feminist politics, but access to guns by any private citizen is now an abomination here in Australia.]

Over the next four years, her health began to decline, and the couple returned to Ohio. In Nov 1926, she died of pern­icious anaemia at 66. Frank mourned so deeply, he died within 18 days. 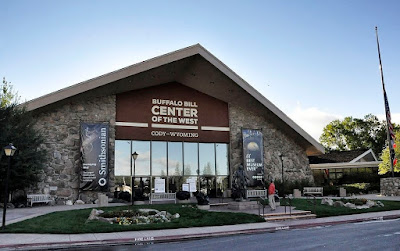 Read Shirl Kasper's 1992 biography Annie Oakley, pub­lished by University of Oklahoma Press. And visit Buffalo Bill Historical Centre which is a complex of five museums and a research library featuring art and artefacts of the American West, located in Cody Wyoming.

Hello Hels, Annie Oakley was phenomenally famous in America (and apparently in Europe and England as well); no surprise that she came from Ohio! Her memorabilia is extremely valuable and collected, but a warning--I have seen many faked Annie Oakley photographs and other items on Ebay and otherwise for sale, usually with an attached suspicious story how it was recently found in an old album.

In fact, I have used Oakley photographs when instructing people in the art of cognitive dissonance--first having a feeling that something is wrong, then using logic and research to expose these impositions. But of course what drives all this is that Annie Oakley was an amazing woman, and her talent and story still attract people to this day.
--Jim

Her life nicely recounted. It must have been quite something then for Americans to tour in Britain and Europe, and perhaps not terribly easy either.

Go sister! I don't like guns either, but Annie showed that women could be as good as men. Not easily done when young women had to behave politely.

Thank you mentioning the importance of Ohio, otherwise I wouldn't have known about the very large historical Garst Museum. The National Annie Oakley Centre is one of the core exhibitions in that museum.

I think Australians have very mixed feelings about gun toting bushrangers (not performers like Annie Oakley). On one hand, we feel sympathetic towards oppressed Irishmen like Ned Kelly. On the other hand, bushrangers were chased by the police and tried for their criminal behaviours.

I never quite trust historians to report on how citizens from one nation were received in other nations. It often depends on which side the historians are from.

However I am fairly sure that Americans on these tours in Britain and Europe were VERY successful. Contemporary newspaper reports were excited about the displays, and the number of tickets sold increased and increased with each tour.

Oakley was not a feminist because her sharp shooting skills, normally male, were sensational. Rather I was impressed with her views that women were as independent as men, that being a woman did not limit a person’s ability to hold any position in society or perform any activity. Not bad for a pre-WW1 career woman!

In his memoirs written in the 1960's my Grandfather wrote of being at "Buffalo Bill's Wild West Show" at Glasgow with his Mother, Uncle & brothers about 1890; "Being at the impressionable age [10], we were thrilled to see real Red Indians, Buffaloes, Prairie wagons, mock attacks on the latter by Red Indians on horseback and the burning of the camp by them etc.". But although he will have witnessed Annie Oakley he unfortunately makes no mention of her!

au contraire. I am delighted grandpa's 1960s memoirs mentioned Buffalo Bill's Wild West Show MANY deccades earlier. Imagine the excitement of a young Glasgow lad, watching real Red Indians on horseback, buffaloes, prairie wagons etc for the first time! Clearly the excitement stayed with him, even as an elderly man.

Thinking back, Annie Oakley as portrayed in that TV series was probably my first crush. I can still remember the surprise when, later, I found out that she was a real person!
She seems to have been an extraordinary person and lived a full and worthwhile life, not letting poverty or calamity (and I don't mean Jane) stop her.
CLICK HERE for Bazza’s comely Blog ‘To Discover Ice’

you got me thinking about which 1950s character/programme had the biggest impact on my young mind. I am going to propose The Adventures of Robin Hood (1955-60). Not only was Richard Greene impossibly handsome; but the characters' interest in fairness, morality and anti-corruption met my parents' high socialist standards in life.

My parents didn't have tv in those days. I do not remember any of the tv series you and our contemporaries loved :( It was a deprived childhood :(

Since most of my contemporaries came to Australia with their parents in the 1948-52 era, I am not surprised that many families were still struggling to cover the rent by the late 1950s. TV was such a luxury then that the choice of Annie Oakley was probably an inspired one.

I also remember Muffin the Mule, William Tell, The Cisco Kid and The Lone Ranger but we didn't really see much of Skippy!

my brothers were younger and less sophisticated than me :) They loved the clowns "Zig and Zag" which started in 1957. I loved Perry Mason, Lassie and and Dragnet.