When I met my Czech born boyfriend (now husband) in 1969, I thought I better read some Kafka, listen to Dvořák and Janáček, and eat palač­inkas. It all worked well, except for the Kafka.

Now the German sch­olar Reiner Stach's excellen Biog­raphy of Franz Kafka (1883-1924) filled in a lot of gaps. Stach spent 20+ years working on Kafka’s life, transl­ated into English. The biography started with Kafka’s childhood in the dying days of the Hapsburg empire in 1883: family life in the Prague flat, schooling, law studies at university and career as an insurance clerk. Alas young Franz’s relationship with his over­bearing father was horrible. Hermann Kafka was a stocky, ambitious and succ­essful merchant, while his only son was tall, thin and fragile. So they were physically, emotion­ally and intellectually opposed.

Biography of Franz Kafka: Vol. 1 The Early Years, Vol. 2 The Decisive Years and Vol. 3 The Years of Insight

Kafka knew himself well. He wrote “The way I am, I am as the outcome of your (father’s) up­bringing and of my comp­lian­ce.” He was reflective and introspective, and saw the way that confrontation sank into him. A crucial night occurred when his fat­her locked the child outside and refused his pleas for water. The impact of this traumatic scene repeated itself through Kafka’s life.


For young Kafka, Yiddish was his family’s spoken language at home and German was his medium for school and written work. Yet Czech was the affect­ionate language used by his caregivers in childhood. So Stach emphasised that Kafka was a German-speaking Jew who matured in Prague at the end of the brilliant Austrian Empire. He noted the dress conventions of the Bohemian capital in Kaf­ka’s writ­ing and the cultured life of the coffee houses where writ­ers/art­ists got together, using local Czech and elite German.

The divide between the two cultures of Prague was replicated in Kaf­ka’s mind, even as the heart of old Prague was being reshaped. The medieval Jewish ghetto was replaced with smart avenues and smart ar­chitecture. But a crazed mob of German students late in 1897 targ­et­ted the Jews. They looted homes, shops and Kafka’s school. This in turn provoked a counter-surge of Czech nat­ionalist riots targ­etting German shops, clubs and businesses in the capital.

For Kafka, the Prague Riots created some­thing menacing in his city. The teenager was also increasingly fearful at school. For all his bril­liance in high school, he feared examinations and assessments.

Even at university, Kafka was very intellectual but lacked confidence. He recognised that life trapped him yet he was certain that he could use his ideas to free himself. Kafka was a full-time Law student, writing on weekends at the Reading and Lecture Hall of German Students. It was here, in 1902, he met Max Brod. 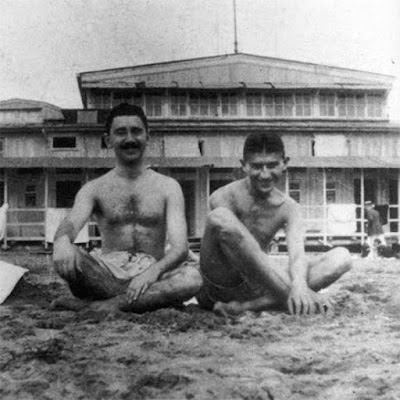 and with Felice Bauer, 1917 (below)
Photo credit: The Guardian 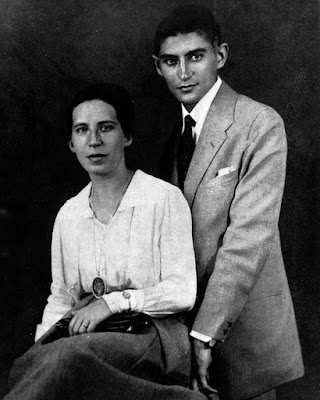 Stach said that Brod was a young self-promoter, net-worker and fashion-courting boulevardier. Yet on first meeting with Kafka, Brod saw something special. He began urging editors to print Kafka’s ear­ly works. The pair shared ideas; they travelled tog­ether through Switzerland, Italy and France.

Kafka was exempted from WW1 service at the front because of TB, yet he was witness to unspeakable misery. In fact the diagnosis of his TB and the collapse of the Austro-Hungarian Empire const­it­uted a double shock for Kafka. He lost the financial security he had been counting on to survive as a writ­er. He began to pose broader exist­ent­ial questions, and his writing grew jagged and more reflective.

Kafka gave a vigorous nod to his literary models and heroes — Fried­rich Hebbel, Thomas Mann, Charles Dickens and above all Gustave Flaubert, the cool writer who Kafka and Brod read together, in Fren­ch! And although he had written several prose pieces since graduat­ion, it was only with The Judgment, written in 1912, that Kafka felt he had made his break­through. Note that the story dealt with a young man who was condemned to death by his father!

Was Kafka unknown in his lifetime? No! Publishers printed his books and begged for more, and he belonged to an influential band of writers who met in Prague’s coffee shops. But he was diff­icult to socialise with. He suffered from:
suicidal thoughts,
total lack of confidence in his own skills,
disease and fear of dis­ease,
very strange diets and exercise fads and
a particularly un­skil­led love life.

Brod introduced Kafka to his Prussian Jewish cousin Felice Bauer in 1912. She became the writer’s long-suffering fiancée, but when he contracted the TB that led to his death, Kafka broke off the engage­ment. When he ev­en­t­ually felt obliged to marry Felice, he did so in an 18-page letter that included a pathetic marriage proposal. Felice did re­cognise his miserable selfishness, and finally run away. None­the­less she held onto Kafka’s 500 deepest confessional letters! Some­times daily letters! Stach wrote tellingly of this strange literary friendship and its use­ful­ness for Kafka.

How sad that Kafka finally met the right woman when he was 40 years old. Had he met Dora Diamant earlier, he might have finally been happily married.

Kafka was resting at a sanatorium on Lake Zurich, a time that became typical of the long stays he spent at health clin­ics across Central Europe. He died of consumption at 40, and was buried in the New Jewish Cemetery in Prague.

Was Max Brod clever and insightful, or a mere hanger-on? Of one thing I am certain: Brod, who revered Kafka and adored his work, HAD to became the literary executor. Because very little of Kafka’s writing was published before his death in 1924, he luckily left his letters, diaries and early writings to Brod, instruct­ing him to burn the documents unread.

If Brod had not refused Kafka’s direct instructions to destroy the unpublished manuscripts, we probably would not know Kafka’s name today. And not surprisingly it was Brod who wrote the first biography of his friend and prepared Kafka’s posthumous works for publication. Brod act­ual­ly collated, edited and published Kafka’s writing, including The Trial and The Castle – now literary classics. When Brod fled Germany for Israel in 1939, he took the documents with him. The two men's friendship was more important for us than for Kafka.

Read Kafka, The Early Years by Rainer Stach, published by Princeton UP, 2016. Then the other volumes.

I took my mother back to Prague decades after leaving Europe and still managed to find some of Kafka's favourite hangouts. The centre of Prague must have been quite a Bohemian literary meeting place in his day, and boozy.

Well done! There is an interesting page for the Czech Republic capital, helping fans follow in Franz Kafka's path from his birthplace to his gravesite. People can visit the family home, his office at the Worker’s Accident Insurance Company, the Old-New Synagogue, his sister's house in the Castle District, Café Louvre, Hotel Erzherzog Stefan and The Kafka Museum etc.

I've never understood what a Kafkaesque situation is. I will look it up one day. So many talented people have such tragic lives. Interesting to learn about Germans attacking Jewish places right back in 1897, and then retaliatory attacks by Czechs.

Kafkaesque means oppressive, surreal and nightmarish qualities that couldn't be more ridiculous if they were planned to be nightmarish. Instead of saying "The irony of a Kafka estate being blocked for 39 years was not lost on Kafka reader", I could have said "the 39 year cock-up on the estate was utterly Kafkaesque".

Franz Kafka's own literature revolved around individuals who were lonely, perplexed, threatened by anonymous forces or trapped within faceless systems.

Hello Hels, Your timing is perfect. I am planning to read/reread Kafka this winter, and this background will help make sense of the source of his surreal situations. The various machinations with his literary estate as well as other elements of his life go to prove once again the old saw about truth being stranger than fiction.
--Jim

Did Brod have a happier love life than Kafka?

When I first tried to read Kafka, I was too young (20), too diverted (by a handsome boyfriend) and too inexperienced in real life situations to make sense of The Trial. In fact the story left me feeling hopeless and helpless.

You will be more experienced in the real world and will appreciate Kafka far more than I did, whether you enjoy his writing or not.

Brod fell in love with Elsa Taussig in Prague. At the same time, Kafka was a frequent guest in Brod's parents' house where Kafka met Felice Bauer, cousin of Brod's brother-in-law. So Brod and Elsa's relationship ended in a marriage, while Kafka and Felice's two engagements did not.

I read Kafka in my late teens. That was probably too early but I did get some pleasure from reading The Trial and Metamorphoses. I was getting into Bob Dylan at the time and they seemed to compliment each other. I don't think that now!
CLICK HERE for Bazza’s novaturient Blog ‘To Discover Ice’

agree. There was/is a melancholy element in 18 year olds that Bob Dylan tapped right into. Ditto Leonard Cohen. Now I recognise that both of those men had depressive illnesses of their own to deal with, and perhaps that was what late teenagers were responding to.

But I think Kafka was very different. His depressive illness was not seductive to late teenagers.

Kafka’s friend, editor and champion Max Brod rescued the papers from Prague and brought them to Palestine in 1939, where he gave them to his secretary Esther Hoffe, Eva’s mother.

From the outset, the contest pitted Eva’s private property rights against the public interests of two countries obsessed with overcoming the traumas of the past: Did the literary estate belong to the National Library of Israel? Or would it be best housed at the German Literature Archive in Marbach, Germany? Does Kafka’s beguiling writing belong to German literature or to the state that regards itself as the representative of Jews everywhere?

The hearing held in June 2016. Six weeks later the Supreme Court rendered its unappealable verdict. A panel of three judges unanimously upheld the lower courts’ decisions and ruled that Eva must hand over the entire Brod estate, including Kafka’s papers, to the National Library, in return for which she would receive not a single shekel of compensation.

Normally, a will allows the heir to understand her place in the generational order of things. Eva insisted that the disputed papers connected her as much with Brod as to her mother.

I find this a sad story. When Eva Hoffe died in Tel Aviv in Aug 2018, this elderly lady assumed that a family will was sacrosanct. She assumed that her beloved mother Esther left the precious Brod estate to Eva, and that Eva would in turn bequeath the estate to the institution of her choice - the German Literature Archive. She died in misery :(

Clearly Kafka would have destroyed all the material, had he had the opportunity. So it was totally due to the heroic Brod and his two trusted women that the estate survived. A miracle in our time.