Malta - from Roman, Islamic and knightly to the European Capital of Culture in Valletta

Malta (pop c370,000) is in the mid Mediterranean Sea, half way between Europe and Africa; Spain and Israel. So the country’s str­ateg­ic position attracted ev­er­y expans­ion­ist nation to take over the tiny Maltese archip­el­ago. The ancient Pho­e­nic­ians settled around the natural Grand Harb­our. But it was the Romans who govern­ed these islands for centuries and first built the city of Medina.

Consider the 60 AD shipwreck of the Apostle St Paul. During his 3 months on Malta living in the Medina cata­c­ombs, he taught Christ­ian­ity and nominated Malta’s first bishop. In St Paul's Ch­urch, the catacombs were for Ch­ri­stian bur­ials and rock altars.

In 535, the island was integrated into the Christine Byzantine province of Sicily. After arriving from Sicily in 870 during the Arab–Byzantine wars, Arabs ruled Malta until the Normans arrived in 1091. To con­so­l­idate their gains in Sicily and to prev­ent the Arabs from regroup­ing near Sic­ily, the Normans stayed until their dynasty faded in 1250. Norman King Roger II (1105-54) for­tified the Arab town of Medina. A Sicilian charter of in­de­p­endence was drawn up for the Malt­ese, par­t­it­ioning the island between the state, church and nobility, and establ­ish­ing a tax system. 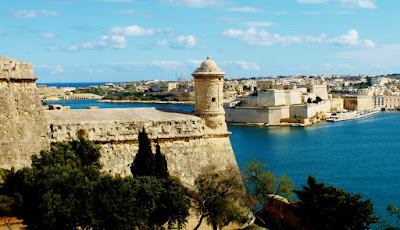 Fort of St Elmo and Fort Ricasoli fortified each side of Grand Harb­our. 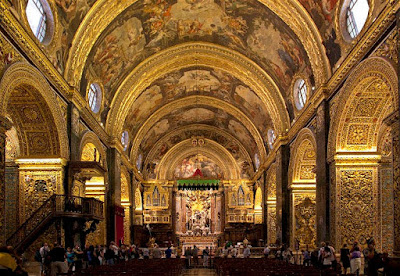 Frederick II Catholic Emp­eror of Germany had combined the Norm­an trad­it­ion of diversity and tolerance with pat­ron­age of Is­lamic arts and sciences. Only in 1250 did the repressive Aragon kingdom took over did the good times end.

The Order of the Hospital of St John mil­it­arily de­fended pil­grims in Jerus­alem ag­ain­st Mos­lem attacks. But Saladin's forces even­t­ually de­feated them and they withdrew to Acre. In 1291 they mov­ed their base to Cyprus. Then in 1306 they became The Knights of Rhodes. When Suleiman the Magnificent ruled in 1521, he expelled the Knightly Order and Emperor Ch­arles V offered them Malta instead. From 1521-1798, they were the Knights of Mal­ta.

Malta suffered frequent attacks by the dread­­ed Ottoman Turks so they built the star-shaped Fort of St Elmo, to for­t­ify the harbour. By 1530 they’d rein­for­c­ed the St Ang­elo stronghold. Fort St Ang­elo was held by the Fr­ench during the Napole­o­n­ic wars, then by the Brit­ish and is now a National War Mus­eum. Eventually another massive fortress was needed on Grand Harb­our’s southside - Fort Ricasoli.

The Ottoman Turkish invaders struck again in May 1565: the Great Siege of Malta was one of their most glorious, trag­ic moments. Tens of thousands of Turks fought a pitch battle, and alth­ough the Maltese knights under Grand Mas­ter Jean de la Valette were out­num­bered, the Turks still couldn’t penetr­ate Grand Harbour for mon­ths. “Lifting the Great Siege” is still memorialised every Sept.

The Knights, devout, aristocratic and warlike, formed one of the most powerful and rich groups in Europe. But they lacked permanent HQs, and with incr­eas­ingly frequent skirmishes against the Ottomans, protection was need­ed. Grand Master La Vallette started const­ruct­ion of a new walled city: Vall­etta. Pope Pius V and King Philip II of Spain both gave aid and the Pope sent a military eng­ineer in 1566. 8,000 workers started building Valetta: Maltese, slaves and foreigners.

By 1571 the knights tran­s­ferred their residence to the new capit­al. In order to pre­serve ea­ch­’s identity, each Langue-language group paid for and built its own Auberge-residential inn. Each had a church att­ac­h­ed. The knights needed city buildings, gardens, public fest­iv­als, moats, massive walls and 50 guns. The old capital, Medina, lost its population and importance.

St John's Co-Cathedral 1573-7 has an austere rectangular ext­er­ior, but inside is a blaze of Baroque: carv­ing, gilt work, inlaid marble and knightly armorials. The mass­ive bar­r­el vault (1660s) show­s ep­is­­odes from St John the Baptist’s life. The nave is flanked by the 7 sumpt­uous Langues’ chap­els and marble knightly tombs. The Cathed­ral Orat­ory has Ca­r­avag­gio’s masterpiece Behead­ing of St John 1608 and his St Jerome is in a side chapel. 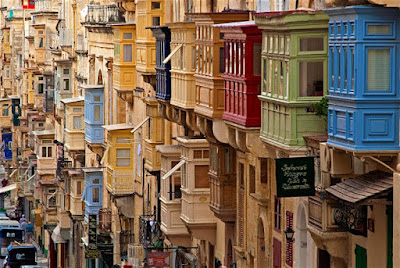 The monks needed a library, so in 1555 a HUGE building was er­ec­ted next to the cathedral. It later became the National Library.

In the 1570s the Grand Mas­ter's Pal­ace was built. Later Grand Mast­ers en­lar­g­ed the Palace, had their por­t­raits and names honour­ed on palace walls and built the Chapel of Our Lady. When the Br­it­ish ru­l­ed Malta, the British Governor lived in the same palace. Approp­r­iat­ely it is now the seat of the Maltese Parliament.

Jesuit College, opened in 1592, was la­ter empowered by Pope Gregory XIII to confer Masters and Doct­or­at­es of Divin­ity. With the 1675 plague, the Grand Master appointed a lect­urer in Anatomy and Surg­ery at Sacra In­firm­ary and built a medical library. After the Jes­uits were expelled in 1768, the Grand Mas­ter appr­opr­iated the Jes­uits’ properties and estab­lish­ed The Univers­ity of Malta. 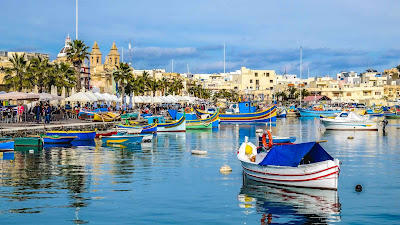 A lovely guest house of the Knights in Valletta was la­ter used by the British fleet as their head­quar­t­ers. Only in 1974 did it become the Nation­al Mus­eum of Fine Arts, with C15th-18th Italian pain­t­­ings.


When Napoleon's troops arrived in the 1790s, the Knights of Malta did not want to fight fellow Christians and fellow French­men. So they voluntarily left Malta for good. The Brit­ish took over Malta in 1814 and Eng­li­sh was made the first offic­ial lang­uage of Malta. Malta was not granted self-government until 1921 but Valletta was already beautiful, steep, Baroque and water fronted.

Perfect timing! Valletta is hosting the title of European Capital of Culture in 2018. Thank you to Lonely Planet for the photos.

Mdina, from a distance 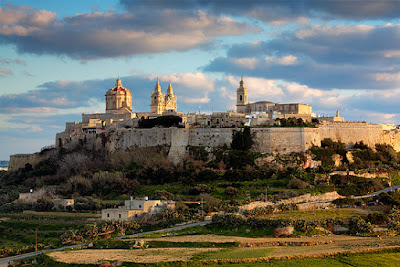 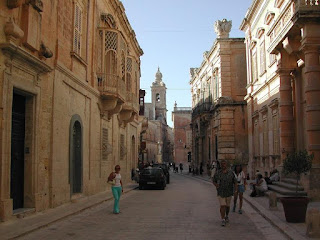 I picked up a few things in your post that interested me, more recent things. Have you been to Malta? From what I see, it is a rather interesting place.

I was in Malta for a super 5 day holiday in July, just about enough time to see the two main islands. My particular fascination, apart from the beaches, food and wines, was for medieval and knightly architecture.

But I made one huge mistake. The temperature every day was 42c, but at night it dropped right down to 37c :( I should have checked for air conditioning in the hotel.

Your photos are very Maltese, but if you could show Mdina in the very heart of the island, you would see the vision that emerges up from the landscape. The walls, cathedral and baroque buildings are all intact.

Hello Hels, I would have spent most of my time exploring the ancient sections. For so many takeovers, there seems to be a lot of the past left on Malta. You didn't mention the extent of the WWII bombing damage, but it goes to show (as if there were not already enough major examples) just how vulnerable is even an out of the way island like Malta.
--Jim

I have never been to Malta but it seems to have a 'Marmite' reputation over here. That is to say it is equally liked or disliked by those who have visited. You paint a vivid and enticing picture (as does Joseph) and Malta certainly has a very mixed heritage. It seems to be at a kind of metaphorical crossroads making it strategically important. The whole island, on behalf of it's population, was awarded the George Cross after the War.
CLICK HERE for Bazza’s picayune Blog ‘To Discover Ice’

quite right... the town might be silent at night, but by day the tours focus on wealthy 15th and 16th centuries stone mansions like the very grand Palazzo Falson. St Paul's Cathedral is splendid, but it is the smallness of the medieval cobbled streets that warmed my heart.

Malta is tiny but it isn't out of the way... you could practically swim from Sicily, if you couldn't be bothered waiting for the ferries.

Re WW2, when a battle front opened in North Africa in June 1940, Malta's location became even more important than ever. The Italians (in 1940) and later the Germans (in 1941-2) had to bomb Malta into ruins because the ports were important places where the Allies could supply military staff and ships. A very brave people, those Maltese.

Valletta seems to have been rebuilt in its lovely pre-war Baroque style.

"Malta G.C" is a 20 minute Colonial Film production (1943). The synopsis: British supply effort, upon which the island is dependent, is rendered difficult by the great distance from British bases and its closeness to Italian airfields. Strategic importance of Malta. German air raids. Tonnage of bombs dropped on the island. German losses of aircraft and pilots. Population of Valletta emerging from shelters to survey the damage inflicted. In the devastation the Maltese have found a new unity - communal food storage and distribution, defence work. Offensive operations - anti-shipping strikes by torpedo aircraft prevented Rommel from being fully reinforced. Malta can claim her full share of the victory in North Africa. Award of the George Cross. 3000 raids have failed to subdue the Maltese but their suffering calls for adjustment. From Malta's suffering will come eventual victory "Such is the will to freedom."

In April 1942 King George VI awarded the George Cross to the people of Malta in appreciation of their heroism.

from malta with love said...

My parents brought us children to Melbourne in 1956. Idon't remember much but my grandparents
cried and cried when we left. The family name was Fenech.

To the entire Fenech family

Welcome :) In 1948 an arrangement was signed with Malta, to bring large numbers of Maltese citizens to Australia, reached its peak in the mid-late 1950s. By 1966, the Malta-born population of Victoria was 26,500, and double that number were born in Melbourne (and Sydney) to Maltese-speaking parents. So you were part of a great movement.

"Heather on her Travels" is a travel blog that has fine photos and ideas about Malta.

I loved that post, thank you. I tried to create a link to my post, particularly because the Heather's photos are so special, but her Comments Section didn't work.

Helen Thank you for your excellent presentation on Malta: Exploring its History etc. My family traces its history on Malta to 1540 ie 10 years following the arrival of the Knights. I am led to believe we originated from Andorra. What would life have been like in that year ? The invasion landings by the Turks in 1565 and Napoleon centuries later took place in the south in Marsasirocco Bay ie to avoid the obvious approach to what became known as Grand Harbour/Valletta. Marsasirocco is now known as Marasxlokk Bay, inhabited/spoilt by the Chinese financed container Freeport from about 1980; built to replace a former Fleet Air Arm base (UK).

My parent’s first floor apartment fronted this beautiful bay with its summer glittering sea and the wild winter storms about 4km, almost directly across the bay from Fort San Lucian. My cousin Prof Sir Augustus Bartolo was deputy PM 1927-1932, minister for education, newspaper owner and editor, head of the law department at the University but 3 Jesuits in the upper house made his government inoperable blocking a lot of pro English parliamentary system reform agenda.

You may have come across the small coastal enemy alert signalling towers in sight vision of each other circling the north coast and backed by much larger towers with surrounding moats. In practical terms the main island is about the size of the Mornington Peninsula with serious traffic problems However the quality of life is so good now that so many left the islands in the big 1950s and 1960s surge for the UK, Canada and Aust after the post war recession.

you are from a very well connected Maltese family ... well done :)

And thanks for the extra information. I will check with the library this week, to see which of the reference books we have and which we might order.