Sacred sites in India have long been associated with water; the Golden Tem­ple at Amritsar seems almost to float in a vast shimmering pool. The pool was created from a forest lake, which the Buddha himself is said to have visited and at which the founder of Sikhism, Guru Nanak, meditated.

When the site later became the main shrine of Sikhism, the lake was enlarged and given the name Amritsar/nectar of immortality pool. Building of the Sri Harmandir Sahib/abode of God, began in the late C16th for the fifth Sikh guru. 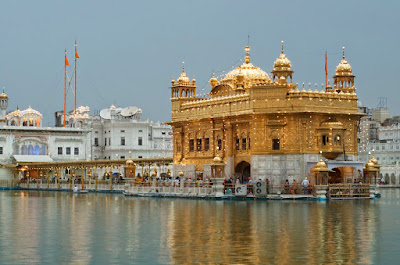 Golden Tem­ple at Amritsar and causeway,
surrounded by a large pool 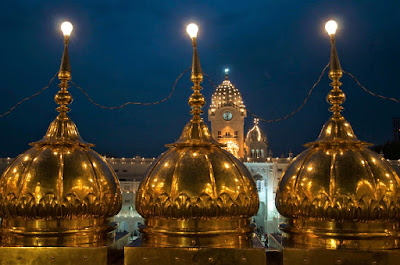 
This Sikh place of worship welcomed those of all faiths and of all levels of society. It was constructed so that the architecture itself suggested openness and reflected the central tenets of Sikhism. Once inside, visitors had to observe respect by removing their shoes and washing their feet, covering their heads and refraining from smoking, eating meat or drinking alcohol. 100,000 people visit daily, especially for the huge canteen that serves free food. Sharing meals with strangers is important in Sikhism, being bound up with the principle of equality.

The most important shrine in the complex is the Harmindir, built by Arjan Dev to house the holy scripture of Sikhism. In the C19th, Maharaja Ranjit Singh covered the temple with gold. The dome, an inverted lotus, is decorated with gold and precious stones and the holy scripture rests on a throne. The complex also contains holy trees with special powers, planted by the first high priest.

The other sacred shrine is the Akal Takht, which symbolises God’s authority on earth. 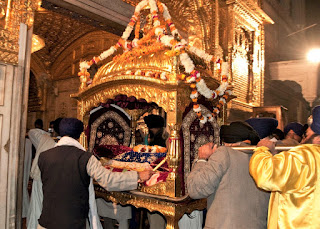 The Guru is carried around on a golden throne 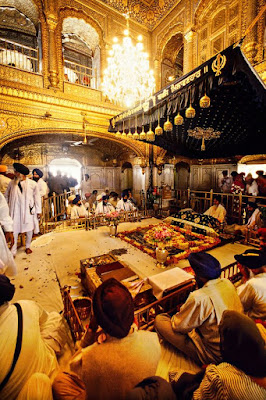 All about Sikhs has provided all the following information on Hari Mandir Sahib’s Art and Architecture.  Major Cole described the Temple as an adaptation of Mohammadan styles, flavoured with a good deal of Hindu tradition. Once taken over by the Sikhs, this synth­esis of Hindu and Muslim influences evolved into the wonderful Indian rococo art often seen in the Punjab. Instead of building the temple on a high plinth in the Hindu style, Guru Arjan had it built in a depression so that worshippers had to go down the steps to enter. Also it had four entrances, sym­bolising the fact that it is open to all faiths and castes without distinction; it is not elevated, so people have to walk down into it; and it is surrounded by holy water. The Hari Mandir, the causeway and Darshani Deorhi were probably completed in 1776.

The main structure rises from the centre of the sacred pool, 150 metres square, approached by a 60 metres causeway. An archway on the western side of the pool opens on to the causeway, bordered with marble balustrades, and standard lamps set upon marble columns. The 52-metre square-based Hari Mandir, to which the causeway leads, stands on a 20-metre square platform. Its lower parts are of white marble, but the upper parts are covered with plates of gilded copper. Inside on the ground floor on a raised platform is the Guru Granth Sahib/scripture, placed under a gorgeous canopy and studded with jewels.

The interior of the Shish Mahal is ornamented with small pieces of mirror, skilfully inlaid in the ceiling, and walls richly embel­l­ished with mostly floral designs. Further above the Shish Mahal is again a small square pavilion, considerably small both at its base as well as in its elevation, surmounted by a low fluted golden dome, lined at its base with a number of smaller domes. The walls of the two lower storeys, forming parapets, terminate with several rounded pinnacles. There are four kiosks at the corners. The combination of several dozens of different domes of gilded copper create a unique and dazzling effect, enhanced by the reflection in the water below.

So the typical art and architectural features of the Golden Temple can be summed up as (1) chhatris-pavilions which ornament the parapets (2) use of fluted domes covered with gilded copper (3) balconised windows thrown out on bay-windows with corn­ices and (4) enrichment of walls, arches and ceilings by mural art.

Maharaja Ranjit Singh repaired the principal building in 1802. To roof the temple with sheets of gilded copper, he donated Rs. 500,000 and the first plate on the temple was fixed in 1803 and completed by 1823. The archway under the Darshani Deorhi was embellished with sheets of gilded copper by the Raja of Jind. Being the central shrine of the Sikhs, almost every Sikh leader of any pretension contributed to its architectural and decorative additions. 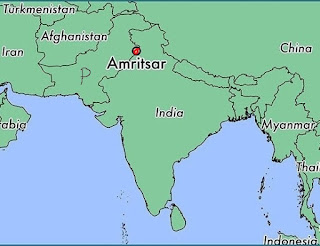 Amritsar's position on the Indian border with Pakistan 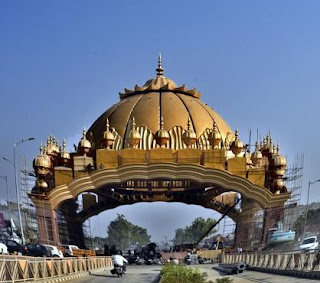 Modelled on the Golden Temple's dome, a mammoth gate now greets those entering the holy city of Amritsar.

The mural paint­ing decorations are floral patterns interspersed with animal motifs. There are about 300 different patterns on the walls, which look like hung Persian carpets. The only mural depicting human fig­ures is on the wall behind the northern narrow stairway leading to the top of the shrine, representing Guru Gobind Singh on horseback. The lower mural works were in embossed copper, ivory inlay and other materials, whereas the upper portions of the walls of the Golden Temple are covered with heavily gilded, beaten copper plates. The designs are Mughalish, but the introduction of human figures, never seen in Mughal decorations, reveals Sikh origin.

The ivory inlay work is to be seen only on the doors of the Darshani Deorhi. The gate is made of shisham wood, the front overlaid with silver, the back inlaid with ivory. The silver-plated front is ornamented only with panels. At the back are square and rectangular panels with geometrical and floral designs, and animals.


In June 1984, supporters of a militant Sikh were demanding the establishment of Khalistan, a separate homeland for Sikhs. Prime Minister Indira Gandhi sent in the army, but the supporters were well armed and hundreds of soldiers were killed. Event­ually the order was given to shell the sacred Akal Takht. Many more people died. Six months later, Indira Gandhi was assassinated by her Sikh bodyguards.

The Golden Temple is a regularly renewed symbol, glowing in richness and colour. But as part of the essential machinery of a living faith, it is a shrine and not a museum.

It is a wonderful building and appeals to me more than the Taj Mahal. I remember the bad business in 1984. It would be a brave act to take on Sikhs.

I might have mentioned the Central Sikh Museum in Amritsar. It is well worth seeing on the same day as the Golden Temple.

even worse was the Massacre of Amritsar in 1919. Huge crowds of Sikh families had gathered in a walled-in city squares, either defying the British ban on public meetings or celebrating the spring holiday. Without warning, British troops opened fire on the crowd, killing or hospitalising thousands. I don't think the Sikhs ever trusted the British again.

very true! Sikh Central Museum is situated within the Golden Temple Complex, and easy to get to. Since the 1950s, people have been able to inspect Sikh paintings, scripts, library books, historic relics, musical instruments, warriors' equipment and silver art objects.

Hello Hels, This temple manages to achieve grandeur amid all its opulence and luxury, qualities that don't always go together. The large gateway does seem awkward and mal-proportioned.

in a country and in a religion that values personal modesty, I was blown away by the obvious grandeur spent on princely palaces in India. But they were built and run by immodest individuals who needed to show off their power and wealth to the entire world.

Why would the Golden Temple be glowing in gold - the dome alone has 750 ks of pure gold. And why would the pathway surrounding the pool be stunning marble and not something simple? I am guessing that the physical beauty enhances both spirituality and equality for Sikhs.

For most visitors, holiness comes from the priests and musicians who continuous chant from the Sikh holy book. A feast of the senses!

Sikhism, like Buddhism, has always struck me as a religion deserving of real respect in its tenets. It also seems to me that what is done by its supporters in the name of any religion does not necessarily reflect that religions outlook. Much of the great art and architecture of the renaissance was ostensibly for the greater glory of God, even when financed by patrons who had the saving of their own souls at the heart of their interest. Maybe all the gold on that dome derives from that self-interest?
Having said that, we can all benefit from the great outpouring of artistic beauty, in all senses.
CLICK HERE for Bazza’s prelapsarian Blog ‘To Discover Ice’

I know very little about Sikhism . other than that the Indians of the rest of India , regard the Punjabi's as being quite dodgy . I work with quite a few rational Indians who roll their eyes and say to watch out when dealing with a Punjabi . I take this with a very large grain os salt but its interesting to hear about the Indian versions of Stereotyping etc.

I agree that much of the great art and architecture during the last 2000 years was for the greater glory of God. But I would also suggest that the arts were expensive, luxury items that no average family could ever afford or want.

My favourite art form could be seen in the illuminated manuscripts of the pre-printing era (i.e before 1450 in Europe). But the material (vellum) was so expensive to buy, and the monasteries' scriptoria were so specialised, that VERY few places could afford the art objects.

Interesting, isn't it? Even though Sikhism and Hinduism both emerged in Northern India, they are different. For Sikhs, it is only by constantly meditating on the one god that individuals can draw near to him. Hindus, on the other hand, worship several gods and goddesses.

Sikhs also say that a good life is lived as an equal part of a community, living honestly and caring for others. And that empty religious rituals and superstitions have no value. e.g while many Hindus are prohibited from eating meat, Sikhism does not impose such dietary restrictions.

But in terms of stereotyping, my guess is that the Hindu population is huge, politically dominant and spread across the entire sub-continent. The Sikh is small, concentrated in one state (Punjab) and has less political influence.

yes , I also wonder if there isn't some jealousy going on as the Punjab is very fertile and has been the food bowl of India although they have been using way too much of their groundwater and are getting into environmental problems .

correct. The Punjab was always known as the fertile bread basket of India, for its rich farming (esp wheat) and local flora and fauna. But I wonder if the high unemployment might be because of the instability in one state divided between two nations.

Fabulous architecture with a rich history. I had not heard of it before.

I have only been a long-term tourist once in India, focusing on Hindu, Islamic and British architecture. Imagine the surprise when we saw the Golden Temple in Amritsar!

many thanks. I love both the architecture and the services connected to the Golden Temple.

I have found this article very intresting.Thanks for sharing your views with us,Recently I went to amritsar and i explored some of the places that serve best Amritsari kulcha in Amritsar

Spouse and I travelled around India, and had a fantastic time, but that trip was years ago unfortunately. I think the time has come to make a list of special architecture that we didn't see last time, and start saving up for a second tour.

Do you agree that the best time to travel across India is probably Jan, Feb, March and April.