I have just spent the best part of a week exploring Australia's Northern Territory which has one of the most extensive examples of rock art in this country. There are c5000 sites found so far and another c10,000 still waiting to be found.

To me, Kakadu National Park was the most interesting and impressive site. This 20,000 sq km park has been returned to, and is managed by the indigenous owners. Aboriginals have occupied this area for c50,000 years ago. The simplest of figures eg shadows of hands & stick figures of kangaroos and crocodiles, were created over 8,000 years ago. 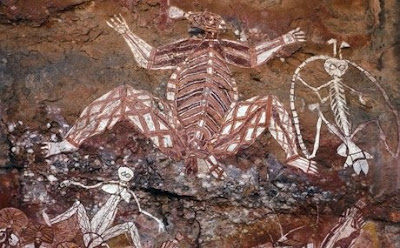 
The thylacine/Tasmanian tiger is depicted in Kakadu National Park, but this animal has been extinct on the main-land from the end of the Ice Age, 14,000 years ago. Today the thylacine is only found in Tasmania, a much colder area.

As sea levels rose 6,000 years ago, fish like barramundi and catfish were depicted, then crocodiles.

Mythical figures began to be depicted at this time also, depicting figures of cultural significance to the Aboriginals. Until the modern era (late C17th) the aboriginals have had an undisturbed presence in this land. The whole of this vast continent of Australia was occupied by Aboriginals, divided into clans who shared the land with their neighbours. The boundaries were defined by the elders who handed down this information orally, from father to son etc. Although they were hunters and gatherers, they had their preferred camping areas, depending on the season.

The clans did not have property, apart from what they could carry, so they developed their sharing culture as a result. And as they were constantly on the move and living off the land, there was no written tradition. The land and the animals were bound by culture to everything they did. When a child was born he became culturally tethered to an animal eg a kangaroo; the young ecologist spent his life caring for and protecting that animal and land.

When they were at a camping area for some time, families depicted their culture on the rocks under which they were sheltering. The area at Kakadu where the art is found is under sandstone shelters, caused by splitting and erosion of the overlying cliffs. These galleries provided shelter for sleeping, washing and protection from the elements. 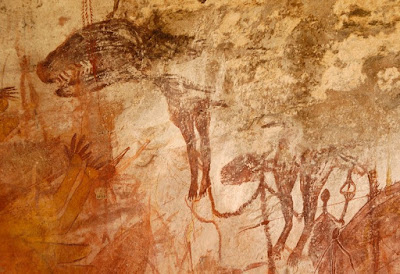 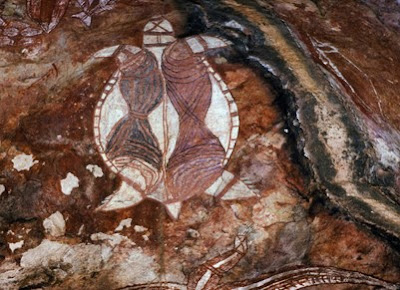 The material that was used to make the art was found in the surrounding area. Ochre was ground up iron oxide rocks, which are plentiful all over North and West Australia; they were mixed with water, spit or egg to enable it to stick to the walls. Ochre seeped into the sandstone and lasted the longest. Ground up rocks such as lumonite (yellow), kaolin (white), charcoal from the fires (black) and others were used. Their brushes were made from hair, reeds or feathers.

Their creation stories were depicted by the artists to be a record for the future generations. Images such as the lightning man Namargon and his wife/sister Barrgini depicted punishment for breaking ancestral law; they became Ginga the great saltwater crocodile. Other images depicted Mabuyu i.e stealing.

Aboriginal occupation occurred across residual, detached parts of the Arnhem Land plateau around East Alligator River. Groups of Aboriginal people camped in rock shelters around Ubirr Rock to take advantage of the enormous variety of foods available from the river, flood plain and woodlands. The rock extension of the main gallery provided an area where a family could set up camp. Food items were regularly painted on the back wall, one on top of the other, to pay respect to the particular animal or to ensure future hunting success. Animals painted in the main gallery are barramundi, catfish, mullet, goannas, long-necked turtles, pig-nosed turtles, rock ring tail possums and wallabies. 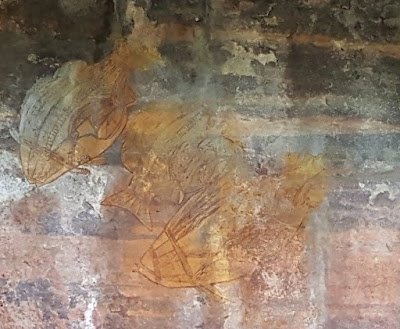 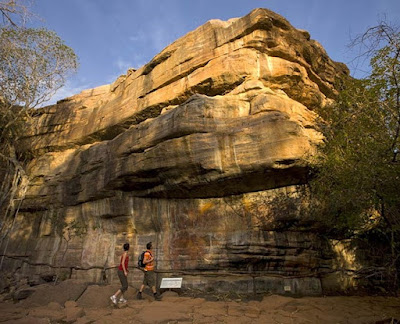 Mythological Rainbow Serpents were powerful Creation Ancestors that were known to tribes throughout Australia. At Ubirr the Rainbow Serpent is called Garranga'rreli. In her human form, she was called Birriwilk and travelled through this area with another woman looking for sweet lily roots. As she passed through Ubirr she painted her image on the rock to remind people of her presence. She rested in the forest at Manngarre, digging a hole in the cool sand.


The Namarrgarn Sisters were painted at Ubirr pulling string apart. They lived in the stars from where they could throw down pieces of string, attach them to people's organs, quickly travel down the string, and make people very sick.

A painting by Mimi spirits can be seen high up on the ceiling of the overhang. Aboriginal people describe how the Mimi spirits came out of the cracks in the rocks, pulled the ceiling rock down, painted the yellow and red sorcery image, and then pushed the rock back into place.

Rock Art is not being produced anymore but the Aboriginals who now own their land are taking great care to protect these ancient sites. Visitors who come to Australia will love to travel north to see the beauty and serenity of this untouched gem. And read Kakadu and Nitmiluk by Dean Hoatson et all, Canberra, 2000.

Hello Joe and Hels, There is something primal and awesome about rock art, wherever it appears in the world. One wonders about the first people impelled to make sense of their world or transmit meaning through the medium of paint, and what they felt their actions represented. The first painters had absolutely no history or traditions of art, so there is an incredible directness and honesty in their paintings, which provide such strong links with early societies.
--Jim

Lovely article Joe. The Aboriginals could have inspired the Buddhists with their disdain for possessions (and presumably desire as well) if they had only known of their existence.
My wife and just adored the Aboriginal art in the Melbourne Nation Gallery when we were there five years ago (this week!).
CLICK HERE for Bazza’s singular Blog ‘To Discover Ice’

How physically fit do you need to be, to walk through all those rocky galleries? This sounds like a great retirement tour.

Terrific post about our Australian aborigines, kind of #aborigines101 for those who know little about our original inhabitants. We stood on the same Kakadu Ubirr rock and saw the paintings. It is interesting to learn that there are Thylacine, the Tasmanian Tiger, paintings in the NT, but are sure about Tasmanian Devils up north. They were once on the mainland, but so far north? I have not heard of that.

Great post thank you, Joe. I will leave all the questions and comments for you to answer, tonight after work.

Now a question of my own. You mentioned crocodiles, for us the most feared animals in Australia. Did the ancient rock paintings represent crocodiles as food, great mythical figures or something else?

The first painters here had no contact with other peoples and certainly would not have had any art tradition to tap into. We were delighted the art survived intact.

The National Gallery of Art in Melbourne has wonderful Aboriginal art. But imagine if you could see the original rock art in situ.

My tour was full of retired participants. As long as you can walk well, you will love the 4, 6 or 8 days in the North.

The thylacine/Tasmanian Tiger was a striped marsupial, extinct for a long time. Its marsupial cousin, the Tasmanian Devil, was on the mainland but now is only alive in Tasmania. You are right to ask how far north the devil got.

I will correct the error, thank you.

The Aboriginal clans certainly ate crocs and any other protein sources they could find. But there was something so fierce and dangerous in the rock images, it feels as if the crocodile had been allocated some mythical features as well.

have a look at the figure of the Cuman chased by St Ladislas, in the fresco cycle at Somogyom in Transylvania. The date is not similar to our rock art, but the simple style is.

A pioneering survey of rock art in Western Australia is documenting thousands of images created by aboriginal peoples over many millennia. The project aims to create a record of art found at more than 250 sites in the Kimberley region. It's hoped that the survey will help map the spread of human settlement across Australia.

Thank you Joe for such a great post. Really, Australia is a large and diverse country and sometimes it can be hard to know where to start!
Indian Entrepreneurs in Australia

I did not go into W.A on this tour, spending all the time in the Territory. But I can easily understand why a wide survey will be important. Where will your results be published?

Very large!! The trouble is that tourists tend to spend their entire time on the east coast, all the way down to Tasmania and Adelaide. The North is very different.