Ingrid Carlberg’s book RAOUL WALLENBERG: The Biography has 3 parts: the early years; Budapest heroism; and the family’s post-war attempts to get him home. I have concentrated on the first two parts, backed up by Jan Larsson’s journal article. And from my mother in law who lived in Budapest in 1944-5; she would have loved this book.

Raoul Wallen­berg (1912-?) was born near Stockholm. The family had been lead­ing bankers and diplomats for many years. His father was a naval of­ficer and a cousin of two of Sweden’s best-known C20th financiers and indust­rialists. But dad died just before the baby’s birth.

After compulsory mil­itary service, in 1931-5 Raoul studied archit­ecture the University of Michigan, Ann Arbor. Then grand­pa sent him to Cape Town to train in a Swedish building mater­ials firm. Finally grandpa arranged another job at a Dutch bank in Haifa where Wallenberg met German Jewish exiles for the first time.

After returning to Sweden in 1936, Wallenberg went into inter­nat­ional trade. Through the Wall­en­berg network of business world links, he was introd­uced to a Hungarian Jew, Koloman Lauer, who ran a Swedish based food import-export firm. Wallenberg spoke fluent Swedish, Russian, Eng­lish and German, and could travel freely around Europe, so he was a per­fect business partner for Lauer. Wallenberg was soon a major shareholder and the international manager of the Hungarian firm, making frequent trips to Hungary. 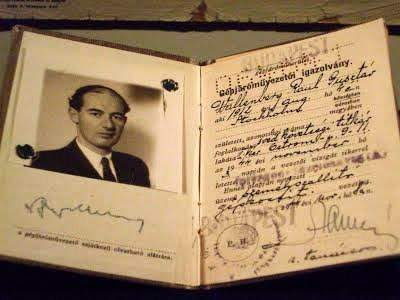 Beginning in 1941 Hungary had joined forces with Germany, against the Soviet Union. When the Germans lost the Battle of Stalingrad in 1943, Hungary wanted to follow Italy’s example and ask for a sep­­­­arate peace. At that point, Hitler summoned the Hungarian Head of State, Miklós Horthy, and demanded solidarity with Germ­any.

By early 1944 Hitler’s plan to annihilate the entire Jewish popul­ation in German-occupied countries was finalised. Only Hun­gary still had its 700,000 Jewish residents alive! Then the Fascists started putting Jews from the Hungarian rural areas into deportation trains to death camps in Poland.

USA's government-backed War Refugee Board/WRB wanted to send an emissary, under Swedish diplomatic cover, to save Hungary’s Jews. The choice of Raoul Wallenberg as the WRB’s emis­s­ary proved inspir­ed. In June 1944 he wrote to the Swedish Ministry for Foreign Affairs, ask­ing for dec­ision-making independence from Budap­est’s Swedish ambas­sador. Prime Minister Per Albin Hansson and King Gustav V agreed!

Even before Wallenberg arrived, the head of Swedish Red Cross Valdemar Langlet was assisting the Swedish Legation. Langlet rented buildings for the Red Cross and named the buildings Swedish Library or Swedish Research Institute. They were then used as hiding places for Jews.

Horthy hadn't started deportations of Bud­ap­est Jews, but the city's residents knew that their deaths would follow. Many of them sought help from the embassies of neutral states who did issue temporary passports to Jews who already had spec­ial ties with these countries. But it was too few, and too late. Wall­enberg personally intervened to secure the release of bearers of protect­ion documents from the columns of marching people.

Horthy received a letter from Swedish King Gustav V in Mar 1944 with an app­eal to stop Jewish deportations. Horthy bravely attempted to assure that justice prevailed and the deportation trains were can­celled. Horthy even discussed making peace with the Allies, to halt the inev­it­able assault from the East. 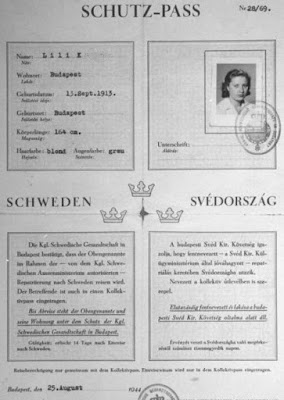 Hitler occupied Hungary, and the Fascist Arrow Cross seized power in March 1944. The new govern­ment resumed the dep­ort­ation of Hung­arian cit­izens on trains to the exter­min­ation camps. Note that the Hun­garian Nazis were feared at least as much as the German Nazis. [Post-war, all Arrow Cross commanders bar one were exec­ut­ed].

When Wallenberg arrived in Budapest in July 1944, time was run­ning out. As first secret­ary of the Swedish dip­lom­atic mission with few resources, he quickly built up a team of helpers. Luckily his office was in the same building as the American Embassy. The WRB rescue mis­sion was an initiative from American authorities, created as an unoff­icial cooper­ation with the neutral Swedish government.

Under Adolf Eichmann, the Germans had already deported 400,000+ Jews in freight trains; there were only c200,000 Jews left in the capital. Eich­mann’s plans to exterm­inate Hungarian Jews were rel­entless. So Wallen­berg issued Swedish schutz-pass/protection certif­icates to enab­le Hungarian Jews to claim immunity from persecution as “foreign citiz­ens". He interv­ened in Nazi and Arrow Cross raids to save Jews from tran­sport­ation to the death camps. He rented buildings and made them Swedish territory, to give hiding spaces.

When conditions were desperate, Wallenberg issued a simplified version of his protective Swedish passport, a mimeographed page with his sig­nature! The new Hungarian Nazi government immediately ann­ounced that all prot­ect­ive passports were invalid. But Baroness El­izabeth Liesel Kemény, wife of the foreign minister, allowed Wall­enberg to get his protective passports reinstated. As the freight cars full of Jews stood in the railway station, he heroically climbed on top of them, ran along the roof of the cars and handed bundles of protective pass­ports to the occup­ants. He then demanded that those Jews who received his protective passports be allowed to leave the train! 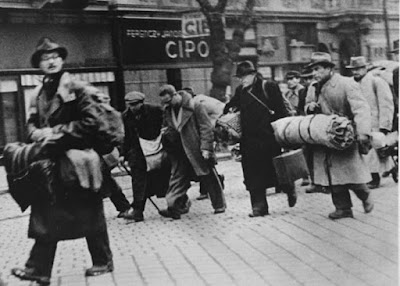 Wallenberg successfully used every tech­nique available to him, including forged docum­ents, bribery and blackmail. Yet in Jan 1945 friends urged Wallenberg to seek shelt­er, especially since the Hungarian Arrow Cross were sear­ching for him. He had been responsible for saving the lives of 30-40,000 Hungarian Jews.

In Jan, Wallenberg approached the advancing Soviet troops, saying he was the Swedish chargé d’affaires for the parts of Hungary liber­ated by the Soviets. En route to Soviet military headquarters in Debrecen, Wallenberg stopped at the Swedish houses, to say goodbye for the last time.

In the end Wallenberg had to place his faith in the Rus­sians; thankfully the Soviet troops did heroically free 100,000+ Jews in the seal­ed Budapest ghetto.


When reports showed that Wallenberg had disappeared, the Rus­sians first claim­ed he’d been murdered by the Hungarian Arrow Cross. Later the Russians admitted that he’d been swallowed up by the Moscow prison sys­tem in 1945. Worse still, the Swedish government did not help the Wall­enberg family get their son returned to Sweden, and they stop­ped the Wallenberg story appearing in Swedish news­papers. Sofar the Russian files have not yet been opened to historians :( 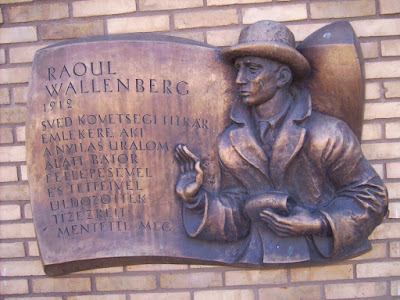 
Jerusalem’s Yad Vashem Memorial, erected 1953, stands to the Jews murd­ered by German, Hung­arian, Ukrainian and other Fascists. The Avenue of the Righteous has 600 trees planted to honour the memory of Gentiles who risked their lives to save Jews. Wallenberg is the best known hero there. In 1981 the late Raoul Wall­en­berg was dec­lared an honorary cit­izen of the USA, Canada in 1985, Israel in 1986 and Australia in 2013.

Such a moving story Hels. I have seen the Avenue of the Righteous in Yad Vashem which was almost too heart-breaking to bear. Not only was Raoul Wallenberg an almost-impossible-to-comprehend hero but had to suffer an ignominious, if unknown, death.
I am currently trying to read the kind of history that will help me to understand the origin and continuing flourishing of antiSemitism; for the life of me I cannot begin to comprehend it.
CLICK HERE for Bazza’s pervasive Blog ‘To Discover Ice’

Hello Hels, It is very depressing to read these stories of Nazi persecution. Even when we read the happy news of the saving of 30-40,000 Hungarian Jews, we still have to think of the horrible fate of the remainder. The Nazis continue to escape comprehensibility in the sheer scope of their inhumanity.
--Jim

Excellent that Horthy showed some unexpected bravery and independence. No wonder he lost power and was sent into exile by the Nazis.

But there was something very special about Raoul Wallenberg, extremely brave and driven to take endless risks, especially once the Arrow Cross fascists seized power in March 1944. I wish he could have been called to Budapest earlier than July 1944.

not just the Nazis in Germany. From 1939 on, the Germans had to invade and enact extermination plans in many countries across Europe themselves. Because they wanted to protect their limited resources, the Germans found three nations where they totally trusted the local Fascists to efficiently do the massacres themselves, including Hungary.

It was only when the Hungarian government attempted to pull out of the alliance with Germany in March 1944 that Germany had to send its troops to Hungary.

what an irony. Head of State Miklós Horthy was an anti-Semite and bitterly anti Russian, so not exactly hero material. Yet in August 1944 when the Germans demanded the resumption of the deportations of Hungary's Jews, Horthy assembled loyal troops and cancelled the deportations for good. Horthy even dismissed the pro-Nazi Sztójay government and appointed anti-Nazi general Geza Lakatos as his new prime minister.

It is puzzling as to why the Russians imprisoned Wallenberg. I note he died in 1947. I recently heard on the radio of how five friends in Budapest saved thousands of Jews by forging identity documents.

I don't think we will ever know where and when Wallenberg died, until the Russians open the files. And even then, the details may be lost. My question is why didn't the Swedish government and foreign service help Wallenberg's family in the 1950s? If an Australian citizen disappeared in another country, our embassies would be all over it like a rash.

We are writing in order to draw your attention to the fact that the gravely false and highly defamatory statement „Polish death camps" is still being used as in the following article: http://melbourneblogger.blogspot.com/2017/12/raoul-wallenberg-great-biography.html

There were only camps established by Germany in German-occupied Poland.

We do call you for correction.
Sincerely,
Mira Wszelaka
Chairman of the Polish League Against Defamation

Thank you Mira for your letter.

Degob said the speed with which the Hungarian authorities cast out Jews from society, then robbed, segregated and deported them was unprecedented in the entire history of the Holocaust. And although there were indeed massacres on Hungarian soil, the Arrow Cross did not build their own death camps. Instead they put Hungarian citizens on trains and told them they were going to Polish death camps - I know that from my late mother in law and her sister, my late aunt (as well as from the books written by historians).

Nonetheless I will alter the wording in my post.