After Prince Albert died in 1861, Queen Victoria (1819-1901) was devastated. Fortunately the Queen became very close to her gillie John Brown in Balmoral, a warn friendship that lasted for decades. When Brown died in 1883, Queen Victoria was devastated for a second time. Now we can analyse the third male relationship in the queen's life that started in 1887.

But how close to real history is the film Victoria & Abdul, directed by Stephen Frears? Queen Vict­oria, Empress of India (Judi Dench) took her Indian responsibilities very seriously. She asked for two Ind­ians to travel from India to share in the Queen's Gol­d­en Jubilee in 1887.

Mohammed Abdul Karim 1863–1909 (Ali Fazal), a Muslim born in British India, was selected to give the queen an Indian gift. But when the Queen wanted to employ these two Indian servants for the entire Jubilee year, Karim and Buksh had to be tutored in English and in British etiquette. After a journey by rail from Agra to Bombay then by mail steamer to Britain, the men arrived at Windsor Castle in June 1887. By Aug Karim was teaching the queen Urdu.

After Karim told the Queen that he’d been a clerical worker in India, he was prom­ot­ed to the position of Munshi/teacher in Aug 1888. This was so that he would stay in Britain.

The Queen's let­ters noted that her discussions with the Mun­shi were social, philosophical and political. Undoubtedly the Queen found in Abdul Karim a connection with a distant part of the world, and a confidante who could discuss intellectual issues with her. At Scotland’s Balmoral Castle, Karim was given the room once occupied by the late John Brown.

In Nov 1888, Karim spent months back in India, in honour of his father Waziruddin. So the Queen wrote to the Vice­roy of India, Lord Lansdowne, demanding action on Waziruddin's pen­sion. Unfortunately the film didn’t mention Karim's many trips back to India and the very close bond with the father. [Note that in June 1892, Wazi­ruddin visited Brit­ain and stayed at both Balmoral and Windsor Castles!] 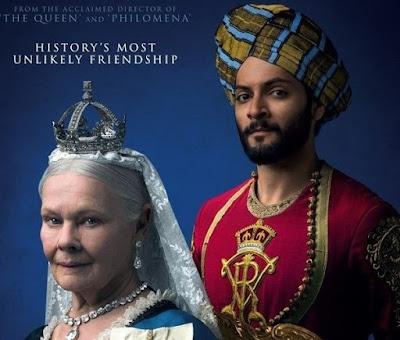 On the other hand the film made it crystal clear that Karim's swift rise instantly angered the members of the Roy­al House­hold, who would never have socialised with Indians out­side the nobility. The Queen naively expected them to welcome Kar­im. As did Karim.

The rapidity of Abdul’s advancement would have led to his unpopularity in any case, but racism was ev­ery­­where; it went hand in hand with a strong belief in Britain's global dominion. Because the queen found racism intolerable, her private secretary Sir Henry Pons­onby (played superb­ly by Tim Piggot-Smith) had to neg­otiate between the Queen and her courtiers after each incident.

The film clearly showed them at Balmoral in Sept 1889 when the two of them stayed overnight, in an isolated house on the estate where Victoria had been with John Brown. The film also showed the “Queen vis­iting Abdul twice daily, in his room taking Hind­ustani lessons, sign­ing her boxes, examining his neck, smoothing his pillows.” It was almost dom­es­t­ic.

Clearly the ageing Queen did not trust her own son and the Royal Household to look after the Munshi after her death. So she asked the Viceroy of India, Lord Lans­downe, to grant Karim land near Agra. The Viceroy reluctantly cooperated.

In May 1892 Karim was in India on leave and re­turned to Britain with his wife and mother-in-law in hijabs. They were put in roy­al houses at Windsor, Balmoral & Osborne. And partic­ipated in Christ­mas presentations.

Note the connections. When Lansdowne's term ended in 1894, Lord Elgin took over. Ponsonby's son Frederick was Elgin's aide-de-camp in In­dia, then an officer in charge of royal horses in Brit­ain. Fred­erick wrote to Lord Elgin in Jan 1895 about the court's discomfort with the Indian.

In the Queen's 1895 Birthday Honours, Karim was appointed a Com­panion of the Order of the Indian Empire, despite the political oppos­it­ion. After Britain’s 1895 general election, Prime Minister Lord Rosebery and Secretary of State for India Henry Fowler were re­placed by Lord Salisbury and Lord George Hamilton. Lord Hamilton suggested the Indian might become a tool in the hands of other, more dangerous men. In fact some of the resent­ment at court and in government occurred because of the Munshi did, or might have, tak­en political advant­age of his position.

The advisors also feared Karim's link to Rafiuddin Ah­med, an Indian political activist/student in London who was con­n­ected to the Mus­lim Patriotic League. They suspected Ahmed extracted confid­ential information from Karim to pass to the Af­ghanistani Amir. As the political anxiety in Britain cont­inued, why didn’t the film discuss these political fears?

And there was another concern. Lord Elgin was warned by Lord Pon­sonby that the Queen gave his letters to the Munshi to read, and that consequently his correspondence to her should not be seen as secure. Most people agreed with the suspicions of her House­hold that the Munshi could have influenced the Queen's op­in­ions on Indian issues, biasing her against Hindus, in favour of Mus­lims. But suspicions that he passed secrets to Rafiuddin Ahmed were later discounted.

Karim never had any children. The Queen's Dr James Reid explained it was because Karim had VD. 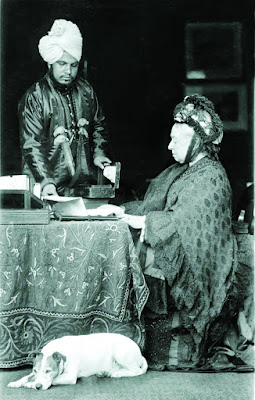 In Mar 1897 as members of the Household prepared to depart for Cimiez in southern France for the Queen's annual visit, they in­sisted that Karim not accompany the royal party, and threatened to resign en masse if he did so. Dr Reid even warned the Queen that her attachment to Karim led people to question her san­ity.

Even as late as 1899, members of the Household were still main­taining that Karim could not accompany the royal party when they on holiday. Nonetheless Karim asked Victoria for the title of Nawab, and to app­oint him a Knight Commander of the Order of the Indian Empire. Despite a hor­rified Lord Elgin, Victoria gave Karim the order in 1899.

The Munshi returned to India in Nov 1899 for a year. Lord Cur­zon, Elgin's replacement as Viceroy, died in June 1900. By the time Karim returned to Britain in Nov 1900 Victoria was facing death. He'd served her during the final 15 years of her reign, taking her from tired and grumpy, and gaining her maternal love.

Filmed in exquisite detail at Osborne House, this excellent film ended with the Queen’s death.  The newly crowned King Edward VII (Ed­die Izzard) sent the Munshi family back to India, and had almost all of Victoria and Karim’s letters burned. At last the king and all his aristocratic lovers were happy at court.

The Munshi died at Karim Lodge, on his Agra estate in 1909. He was placed in the Agra cemetery bes­ide his father. Having no children, Munshi’s nephews inherited the estates. The family continued to reside in Agra until the partition of India in Aug 1947, after which they emigrated to Pakistan.

Hello Hels, I have to get hold of a comprehensive biography of Queen Victoria. There are many surprised to her life and personality when we learn about her in bits and snatches. Probably what most horrified socially stratified England was Victoria going outside her social class for companionship, and the anti-Muslim accusations strongly echo what is going on in the world today.
--Jim

In spite of you and myself pretending to not notice all of the historical inaccuracies, it really was a great and entertaining film. From what I can see by photos, actor Ali Fazal is somewhat more handsome than the real Abdul. I love the filling in of gaps that you have written about.

Did the Queen ever have an affair with John Brown? Or marry him? Did you see the film Mrs Brown?

Queen Victoria was a demanding mother and a needy wife, but she was very brave about going outside her social class for true friendship. Despite the horror-filled comments of her entire court, she seemed to have treated her special men with dignity, even though one was working class (Brown) and the other Muslim and Hindi speaking.

Ali Fazal was young and VERY handsome in the film, and his constumes were beautifully designed. No wonder Queen Victoria thought it was better fun spending time with him than with boring, rigid, elderly, pompous aristocrats in her court.

Loved the film, yes! I did read of evidence that Queen Victoria formally married John Brown, but it seems unlikely. She was devastatingly depressed after Albert's death, obese, lonely and had an eating problem. All she wanted from Brown was companionship, horse riding, peaceful outdoor hours and no interference in the affairs of state.

In lectures, we discussed Lord Ponsonby's successful military career and after the peace at Sebastopol, he was appointed equerry to Queen Victoria's Prince Consort, Albert. What might Albert have thought of Ponsonby negotiating between Victoria and Abdul Karim on one side, and the rest of the court on the other.

Student of History
via email

Sir Ponsonby and especially Lord Salisbury were not very impressed by the Queen choosing Abdul Karim as a teacher, confidant and friend. But in the end, Henry Ponsonby's absolute responsibility was loyalty to his queen. I am certain the Prince Consort would have expected nothing different.

Interesting thoughts, I have not yet seen the film.

The film is well worth seeing. But brace yourself..it is hard to watch our own racist thinking acted out in public.

Really interesting summary of the film. We haven't seen it yet, but A Bit About Britain did feature Osborne House a month or whatever back - http://bitaboutbritain.com/queen-victorias-osborne-house/ - where some of the costumes were on display. I should imagine the courtiers would have reacted in a similar fashion if the new kid on the block had been a Durham miner (nothing against Durham miners, before anyone gets excited - it's just an example).

that is absolutely true. John Brown was not only a servant (imagine that!) but a Highlander as well (was there no limit to the Queen's grotty behaviour?). The queen asked her second son to leave Buckingham Palace because he refused to shake the servant's hand! The dean of Windsor told the foreign secretary that John Brown was sleeping in the room adjoining the queen's bedroom!!

I am not sure the royal court would have found a miner more offensive.