Otto Plath (1885-1940) was the father of poet Sylvia Plath (1932-63) but nobody seemed to know much about him. Scholars of Plath now have newly discovered FBI files, not knowing that biologist Otto had ever been investigated over alleged pro-German sympathies. Although Otto died in 1940 when Sylvia was 8, he exerted a lifelong hold on her.

The FBI started in 1908. During WW1, FBI investigators' files revealed that this Alien Enemy was det­ained over susp­ected pro-German allegiance. Otto told investigators that his family got to the USA from Grabow in Germany because of the better conditions, but he defended his homeland.

Otto apparently encount­ered discrimination at California University, and was passed over for a scientific post due to his birth in East Prussia, though he had moved to the USA in 1901 in his mid teens. The files revealed that he lost a salesman job for not buying Liberty Bonds to aid the war effort, and it was implied that he had a less than whole hearted attitude towards WW1 and to America. The FBI concluded that he was a morbid man who made no friends, and with whom no-one was really well acquainted.

When FBI officers noted Otto's morbid disposition, was that because he had a German character and a German accent? The FBI files recorded that Otto could not get teaching pos­itions. Later however, having graduated from North Western College and the University of Wash­ing­ton Seattle, he did obtain positions. Nonetheless they said that he had been turned down for assist­ant's roles partly because he has not the pers­on­ality that was required of an instructor at the University, being very nervous and not being able to interest students. Except for one, apparently - his wife.


From academics who knew Otto, the FBI investigators reported that his scientific work was excellent. So the officers suggested his brooding was over the bad luck he was having making a living due to his nationality and that he felt persecuted. No wonder he was brooding. Unemployment was horrible for anyone, let alone a talented university graduate.

In any case, being pro-German early in the C20th was not the same as being pro-Nazi in the late 1930s. Could it be that Otto simply missed the lost land of his childhood, the taste of German food and the country’s smells, sights, customs, language?

Family life before WW2
In 1932 he married Aurelia Schober (1906–1994 daughter of the Austrian Franz Schober), a young master's student at Boston University. That year a rather elderly Otto fathered Sylvia Plath, and later her brother Warren.

Peter Steinberg and Heather Clark told an international  conference at Indiana university: "Sylvia had a conf­licted attitude towards her own German-Austrian identity." Her mother was of Austrian descent. It helps explain this hard-driving, intense immigrant work ethic that Plath in some ways inherited. People talk about her perfectionism as being almost part of her neurosis.

In Letters of Sylvia Plath: Vol 1 1940-1956, the first letter was written in 1940 when Plath was eight as a get-well note to Otto. He died six months later and she was shattered. I’ll never speak to God again, she told her mother. The determin­at­ion to regard herself as a victim, evident in her later poems, could be trac­ed back to Otto’s death. 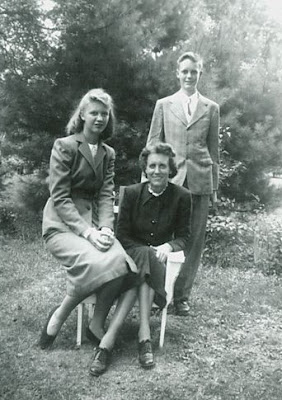 Sylvia’s earliest memories indicated that Otto was prone to depress­sion, which may suggest that he did indeed pass on a curse to his brilliant daughter. But her father’s premature death in 1940 was THE traumatic experience for the young girl, the most significant turning point in her mental health.

In her journals, she suspected that he deliberately died to spite her. All her life she had been stood up by people she loved; daddy leaving her was the start of it. Even after WW2 was well over, Plath had mixed emotions about her father, writing in her journal in 1958: "He … heiled Hitler in the privacy of his home." She wrote in her vicious poem, Daddy:

"I have always been scared of you,
With your Luftwaffe, your gobbled­goo.
And your neat mustache
And your Aryan eye, bright blue.
Panzer-man, panzer-man, O You--
Not God but a swastika."

Otto was thus posthumously stigmatised in this poem. But was Sylvia Plath’s daddy ever pro-Nazi? Clark disagreed that Otto had Nazi sympathies before and at the beginning of WW2: He was a pac­ifist! Maybe Sylvia was mis-remem­ber­ing, or was angry towards him.

Is was possible that young lass was angry, grief-stricken, aband­oned, mortally wounded – but still found momentary release in offensive, black comedy. Peter Steinberg and others wrote Plath’s poem Daddy seemed to make light of and cons­cious­ly used the prejudices against him.

Letters continued from Smith College, Mass and then from Newnham College Cambridge, where Sylvie studied English as a Ful­bright scholar. And in her journals she unleashed a blitz of man­iacal self-hatred: She never loved Otto. She killed him. She was deadly as a cobra: What a luxury it would be to kill her, to strangle her skinny veined throat.

From Smith she wrote to her mother “Graduate school and travel abroad are not going to be stymied by any squalling, breastfed brats.” From Cambridge she wrote with fury, denouncing Newnham undergraduates as “prim, scholarly little British bitches”, and longing to strangle them. The female dons at Newnham were “Victorian grotesques”, and her own “vital curiosity” was superior to the “grubbing detail” required for a graduate thesis.

And mum Aurelia copped vitriol as well. In her diary Sylvia wrote brutally about her hatred for her mother, to whom she felt inescapably attached but whom she blamed for the death of her old father when she was eight.

Plath married another poet Ted Hughes in 1956, and had two children, Frieda and Nicholas Hughes in 1960 and 1962. She suffered from depression for much of her adult life and committed suicide, at 30, in 1963. She had placed her head in a gas oven. 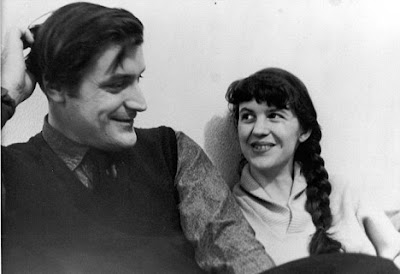 The FBI files were discussed in Oct 2012 at an international Plath sym­posium at Indiana University. Readers can read the Conference papers as evidence, not of Otto’s pro-Nazi views, but of the conditions that ailed Sylvia. And read reviews of Plath's letters by John Carey in the Sunday Times and David Sexton in the London Evening Standard.

If the tendency to depression and suicide is genetic or learned, note that Plath's son Nicholas hanged himself at his home in Alaska in 2009. He was only 47.

I did not know about the death of her son. What a family full of such tragedy.

Otto died from diabetes mellitus and gangrene, not suicide. He did not intentionally desert his family.

Hello Hels, I remember a few years ago reading The Bell Jar for the first time. The language was quite poetic, even in the novel, and I suspect that her poetry should be interpreted symbolically, and not just taken literally when looking for clues to her life and mindset.
--Jim

nod. I think I actually UNDER-estimated the family's tragedy.

After Sylvia Plath died, Ted Hughes moved his next lover (Assia Wevill) into his home to mind Sylvia's orphaned toddlers. A few years later, Assia killed herself and her four-year-old daughter in the same house as Sylvia Plath did, using the same gas oven method. And once again Frieda and Nicholas Hughes woke up to find their second mother dead in the kitchen.

Frieda and Nicholas Hughes were in primary school, this time :(

I am sorry Otto died from what should have been a controllable disease, and I am sorry he died when Sylvia and Warren were so young. But I am very glad he did not suicide.

It is clear Sylvia was devastated, but she was not deserted and she was not a victim of daddy's viciousness.

is it possible that all that melodramatic writing, in both her published works and her private diaries/letters, was simply what poets do? She published Bell Jar in 1963, the very year of her suicide, and described the loneliness and isolation of a psychiatrically disturbed person. Each emotion in her writing may have been exaggerated, but in the end, her emotions were very telling.

I had always been a bit wary, even suspicious, of Sylvia Plath after reading 'Parliament Hill Fields' because it is a beautiful place and not as she described it. Then later, I read 'Daddy' and realised she would have been writing about her inner self in the former poem. Now I am shattered to learn that the authenticity of 'Daddy' is not as I supposed.
Hughes has long been vilified as her 'bully husband'; perhaps that needs revising too?
CLICK HERE for Bazza’s strange Blog ‘To Discover Ice’

I didn't learn any Plath literature in high school or university, so I was never obligated to persevere and be analytical throughout her work. Reading "Daddy", without the support of a great teacher, was such hard work that I was reduced to considering Plath as hate filled.

In her private letters to friends in the USA, Sylvia Plath reported that Hughes beat her, ended at least one of her pregnancies and wanted her dead. Normally I would take that 100% at face value, but in the light of Daddy, perhaps she was still hating herself or her father. But now read "A Lover of Unreason: The Biography of Assia Wevill" who detailed how Ted Hughes had been a beast and bully to her.

This is very interesting especially on the light it sheds on Plath's character and general mental state. Undoubtedly she did have issues stemming from her childhood and relationship with her parents, but personally I think that Ted Hughes's character and behaviour was also a contributory factor. I've always felt there was something evil about Hughes: the obsession with death and the cruel aspects of nature in his poetry, his dabbling in shamanism and the occult, his selfishness (expecting Plath to give up her writing to look after the home and children while he got on with his), his unfaithfulness (Assia Weevil was not the only one; there were recent articles that he was involved with another woman at the time of Plath's death). I feel that it's like he had a spirit of death: Plath, Weevil, his son, even the brothers who owned a farm next door to his house, all committed suicide.

thank you for reading the post... I would certainly have agreed with you about Ted Hugh's hefty contribution to Sylvia Plath's poor mental health. And perhaps to Assia Wevill's as well. But as soon as you read Plath's early letters and journal entries, we have to take her own view as correct - that dad, and to a lesser extent mum, were worthy recipients of her vitriol. Or that she was so broken already, that she (?knowingly) made an appalling choice in husbands.