Michael Barclay invited us to share his sensitive obituary. Gordon Downie (1964-2017) was born near Kingston Ont, to Lorna & Edgar. He was the 4th of 5 children, the one who played goalie for Amherst­view’s successful hockey team.

Downie moved to Kingston to attend Kingston Collegiate Vocat­ional Institute. Coming from a rural area, his out­sider status became part of his public identity: the poet in the bar band; the rock star slumming it with indie kids while cosying up to intel­ligent­sia; the artist with a commer­cially successful cushion who thrived on chall­enging himself with new collab­orators and varied disciplines like dance, painting and act­ing. The rest of the Tragically Hip were scions of the King­ston elite. Downie could at least boast that he was connected to hockey royalty.

He joined a punk band called The Slinks; their friendly rivals at the school were a Grade 13 group The Rodents, featuring bassist Gord Sinclair and guitarist Robbie Baker. A young drummer, Johnny Fay, watched with interest. Four of those five young men played their first gig as the Tragically Hip in Nov 1984, in a small white room at the King­ston Artists Association. Paul Langlois, son of the school's sports coach who Downie befriended, joined a year later; by that time, Downie was studying film at Queen’s and drinking.

In the band’s first three years, they played ’60s cover songs by the Rolling Stones, Otis Redding, Mar­vin Gaye and the Monkees. Downie’s on-stage improvisations were a main part of the band’s appeal, though he was not yet a lyricist. As original material slowly seeped its way into the set, it was Gord Sinclair who wrote most of the lyr­ics. It wasn’t until the 1991 release of the band’s second album, Road Apples, that Downie seized the lyrical reins entirely.

The Tragically Hip released their first EP in Dec 1987; a year later they headed to Memphis to record Up to Here. It became one of two Hip albums to eventually sell more than a million copies in Canada. They tapped into rock-n-roll’s primal energy in ways that had been largely forgotten by the late ’80s: they were a dressed-down, no-frills road­house bar band whose videos were rejected by MTV, a band whose sound was far removed from the era’s pop stars, stadium rock, ageing Boomers, newer bluesy bands. And they were too traditional and aspirational to be Alter­n­ative.

It was their live performances, where Downie’s unusual charisma electrified everyone who saw them. No other act back then was embraced with the fervour that Hip fans displayed toward Downie as a performer, but it was his lyrics that inflamed his fans. In a genre prone to cliché, outright nonsense and occasional misogyny, Gord Downie wrote memorable lyrics.

Canadians watched him command 40,000 people at outdoor appearances during the 1990s, singing songs that were summer soundtracks for an entire generation. Video clips didn’t do justice to the energy in the room generated.

Downie’s specifically Canadian references were all but alien on radio playlists. He prized the anomaly - he’d arrive on stage and make strange Canadian references! But there were likely to be as many American refer­ences as Canadian ones in Tragically Hip songs. So it’s telling that the album on which he made the most Canadian references was also their most commercially successful: Fully Completely 1992. 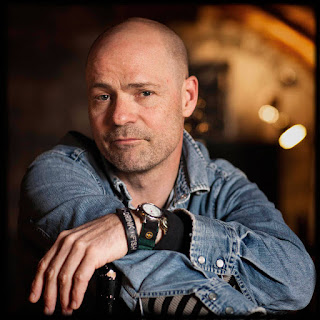 His first solo, Coke Machine Glow 2001, had songs his Hip bandmates had rejected and works culled from an accom­panying book of poetry. And it set sales records in a corner of the pub­lishing industry. The album was experimental and far removed from the rock radio world the Hip inhabited: droning organs, atonal guitar screeches and accordions compet­ed for sonic space with Gord’s vocals atop opiated folk-country songs. The press and music industry were baffled; among non-Hip fans, it remained a beloved and influential record.

Solo albums were a pressure-release valve for Downie in the early 2000s, as the Hip became elder statesmen in danger of being taken for granted. Record sales and radio play declined somewhat. Later he pushed the band to record two albums with Bob Rock and he helped broaden their sonic palette. His later solo records, including a rollicking, punkish 2014 album rec­orded with the Sadies, were remarkably conventional comp­ared to Coke Machine Glow. Downie loved to make rock records!


And Downie directed his attention to envir­onmental issues, specifically those endorsed by Lake Ontario Waterkeeper, a Canadian water charity. Downie’s political aware­ness had been tweaked in 1993, when the Hip invited Australia’s Mid­night Oil on a sum­mer Canadian tour; that band’s singer, Peter Garrett, was an outspoken activist who later served as an Aus­tralian minister. Garrett and his bandmates became invest­ed in the fight against clear-cutting in BC, and convinced the Hip to join them. Years later, when he decided to be more vocal, Downie relied on research and science rather than on his celebrity.

By 2016, when he released his Secret Path project to address the legacy of residential schools, he knew his celeb­rity was now his best asset: he had the country’s att­ention. The reluctant nat­ional­ist used it to focus specifically on an issue he felt was a glaring stain in Canada’s hist­ory. He quickly transformed the old tale of a 12-year-old boy who froze to death running away from residential school in 1966 into a current concern. This tragic symbol launched a Canadian conversation about compassion.

Though he relished his role on stage, Downie’s app­r­oach to cel­ebrity was always tenuous. He rarely granted int­er­views, and generally eschewed red-carpet events. The entire band val­ued their privacy, and Downie even more so: perhaps because of the adulation directed his way, but also because of the way he was raised. It was, in a way, a very Canadian approach to celebrity.

In 2015 the Huff­ington Post ran a rare piece of celeb­rity news about Downie, who’d steadfastly shielded his four children and wife from the public eye. That year the couple had separated, prompt­ing the sale of his Toronto home. And his beloved fath­er, Edgar, was ail­ing; Gord spent a lot of time with him in Kingston while rec­ording the Hip’s Man Machine Poem at a nearby studio. Ed­gar died in Nov 2015. 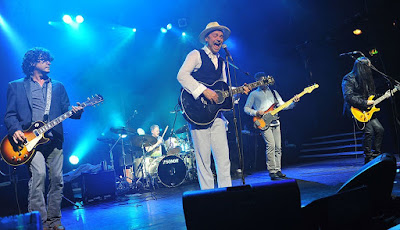 The Tragically Hip, in London
2015

3 days after dad's funeral, Gord had a seizure. The hosp­ital diagnosed a primary glioblast­oma, an aggressive brain cancer. Months of surgeries and therapies followed. The band broke the news in May 2016, while simultaneously announcing a tour to promote the new album.

It would be the last. Lead singer Gord Downie performed with band members Paul Langlois, Gord Sin­clair, Johnny Fay and Rob Baker at the Memorial Centre to launch the band’s latest Man Machine Poem tour. Once the show hit the road, there was a public outpouring that few could have pred­icted: a year of Downie transforming from an aging rock star to tragic hero.

Here was a man wrestling with notions of mortality in his work for years. He was the poet who once asked “When are you thinking of disappearing? When are you falling off the map?” This was a man invit­ing us to his own wake. Everyone was prepared for the funeral at any moment.

He made it. The final Tragically Hip show at the K-Rock Centre in Kingston in Aug was broadcast live on the CBC to 11.7 million viewers, with 20,000 people from across the continent assemb­led in Springer Market Square to celebrate. Then three more live shows, in Toronto, Ottawa and Halifax.

In his last public appearance, Downie appeared at a WE Day event as part of Canada150 in Ottawa, once again calling on Canadian youth to reckon with the legacy of resid­ential schools. A children’s choir sang The Stranger, and the emotion and pride on Gord’s face was palpable.

Downie’s lyrics imbued Canada’s mus­ic scene with mystery and magic and presented them, poetically, to a wide mainstream aud­ience. Do the work. Create the spark. When he finished, Gord Downie left an eternal flame. He passed away in Oct 2017.

Michael Barclay's The Never-Ending Present: Story of Gord Downie and the Tragically Hip will be released Ap 2018.

"If Canada was a person, of course Canada would be a hockey player; an ex-goalie who almost made it, and never lost love of the game. Canada would be a humble and gracious soul who grew up in a small town. Canada would form a band in university with his friends, and they would sing about uniquely Canadian things that years later would confuse the rest of the world. They would tour relentlessly and play every bar, saloon, and run-down hockey barn from St John's to Victoria. They would play in famous theatres and in farmer's fields, and on one glorious night in 1995, they would play Saturday Night Live, but they always came home to Canada. Maybe the world wasn't ready for a lead singer who told stories about killer whales, answered invisible phones as a dance move, and re-contorted his face to squeeze every piece of meaning out of each lyric, but Canada sure was.

If Canada was a person, if Canada had a name, it would be Gordon; but he would ask us to just call him Gord. Gord Downie was an ambassador, an advocate, a poet, a history teacher, and a story teller. Gord told us about Tom Thompson, Hugh MacLennan, about Bill Barilko, and Jacques Cartier. He sang about the FLQ, David Milgaard, and Pierre Trudeau.

Gord Downie was Canada, and Canada isn't the same without Gord Downie. The summer of 2016 will be forever remembered for that night in Kingston, as the final notes of Ahead By A Century rained down, a nation wept. Thank you, Gord. We know you have to go".

Thank you. "Gord Downie was an ambassador, an advocate, a poet, a history teacher and a story teller." And "as the final notes of Ahead By A Century rained down, a nation wept".

Gord's life was so important to the nation ... and his loss was so sad :(

Hello Hels, Although this is the first that I have heard of him, Downie seems like a real mensch, and I am sure that he will be remembered as such.
--Jim

Canada would be a humble and gracious soul who grew up in a small town.

Sometimes an artist represented a nation's values so uniquely that when Downie died, my Canadian friends wept.

I also didn't known Gord, but I can identify easily. When Janis Joplin died in 1970, my heart was broken. She represented my generation's values.

Michael Barclay would totally agree with you!