Coal was essential for military production during WW2; somehow Britain had to match the quotas needed to keep fact­ories churn­ing out the munitions required at the front. And as Britain was unable to import coal in wartime, the production of coal from local mines had to be increased. But how? 36,000 miners were already cons­crip­t­ed for army duty and had left their collieries.

Ernest Bevin, wartime Minister of Labour and National Service and a former Trade Unionist, believed the short­age could be remedied by using conscripted men to fill the vacancies in the mines, keeping production at the rates requir­ed. In Dec 1943 he announced a scheme in Parliament.

A ballot would take place to put a fixed perc­ent­age of cons­cript­ed men into the underground collieries rather than into the armed services. “We need 720,000 men continuously employed in this industry. This is where you boys come in. Our fighting men will not be able to achieve their purpose unless we get an adequate supply of coal.” Any refusal to comply with the Direction Order would result in a heavy fine and/or imprisonment under the Emergency Powers Act in force back then. 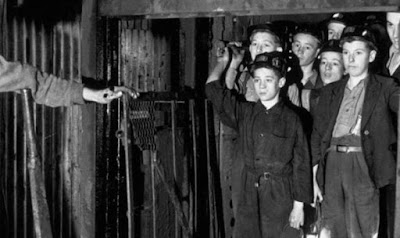 Bevin Boys' first day down the mine
Photo credit: Express 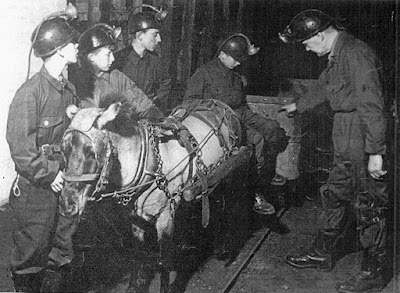 Every month, 10 numbers were placed in a hat; 2 numbers were drawn and those whose National Service registration number ended with those numbers were directed to the mining industry. Along these ballotees were the optants, men who had volunt­eered for service in the coal mines, rather than the armed serv­ices. From 1943-8, 48,000 young men between the ages of 18-25 were conscripted for Nat­ional Service Employment in British coal mines.

After medical examinations, travel warrants & instructions, the men had to report to one of the thirteen Government Training Centre Collieries in England, Wales and Scotland. Accommodation was provided in either a purpose-built Miners Hostel similar to an army camp, or billeted out to a private home at £1.25/week from a weekly wage of £3.50.

Each new miner was taught mining in a 6 weeks training course: classroom lectures, surface-and-underground training and physical fitness. Only a minority of Bevin Boys were actually employed cutting coal on the coal face, and others worked as colliers' assistants, filling tubs or drams. The maj­ority worked on maintaining haulage roads, or con­trolling underground con­veyor belts. The few who had previous electrical or engineering experience were given similar work in the collieries.

This alternative to army service caused much dismay; many of the Bevin Boys wanted to join the fighting for­c­es, or felt that as coal miners they would not be valued.

The Bevin Boys came from a range of backgrounds and skill sets. A few were true conscientious objectors who were being consc­rip­ted for essential but non-military work. Some were sons of privilege, and many were lads from big cities who had never even seen a coal mine. Whatever their background, by Dec 1943 one in ten conscripts found themselves in the mines instead of at the front. 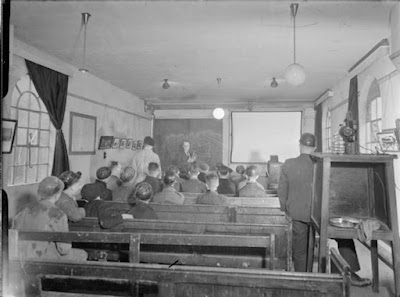 6 weeks of training for each intake of conscripts
in classrooms, via vigorous physical training and in the underground mine
Photo credit: PressReader

A large proportion of the 48,000 Bevin Boys sent to Britain's coll­ieries disliked their time spent there. This was partially because they had been hoping to join the army, as noted. Plus many suffered vicious taunts from by-standers; coal miners wore no distinctive uniform so moral judgements were often made about the lads “shirking” from war service. Even the police would stop and question men of military age, if they suspected the men had avoided conscrip­t­ion.

Finally a large number of reserved occupation miners also dis­liked the Bevin Boys. They saw the lads as a threat to their live­li­hoods and also as dangerous liabilities, given that most did not come from mining backgrounds. Worse, the local mining fam­ilies had already seen their own sons conscripted into the armed services, only to be replaced by very young, reluctant outsiders.

Unlike the ordinary miners, who wore their own clothes, Bevin Boys were issued with overalls, safety helmet and working boots. But it was unfortunate that Bevin Boys a] were not given an identifiable war service uniform and b] were not released from their coal mines until several years after the war ended. This was long after their counter­parts in the armed forces had been demobbed.

The mine-work was done in appalling conditions with no toilet facilities, working in areas that were hot, cold, wet, dusty or dirty. The constant noise of machinery was deafening. And there was always the fear that there could be an explosion resulting in fire or rock fall. [I am claustrophobic. That would have been my worst fear].

The ballots were suspended in May 1945, with the last of the 50,000 conscripts working in the coal mines. The Bevin Boys had all been demobbed in 1948. A small number stayed in mining after the war, but most couldn't wait to leave.

Unlike other conscripts, they had no right to go back to their previous occupations, they received no service medals, demob suit or even a letter of thanks. And because the official records were destroyed in the 1950s, former Bevin Boy ballotees could not even prove their service, unless they have kept their personal documents. 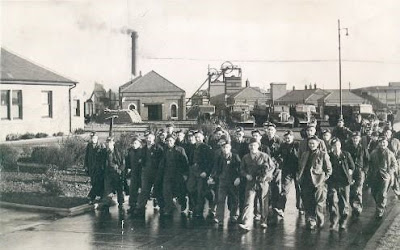 Bevin Boys in Durham
They were just teenagers, away from home for the first time
photo credit: WW2inColor

Recognition
Many men who spent their war on the so-called underground front went unrecognised for almost half a century. Perhaps they were still embarrassed about not serving on the front. In any case, some men did eventually form the Bevin Boys Association in 1989 in Dorchester Dorset. The first official Bevin Boys reunion was held at the former Chatterley Whitfield Mining Museum in 1989.

It took until 1995 for the British government to form­ally re­cog­nise the contribution of these men, by then old age pens­ion­ers. The Queen made a speech and unveiled the Home Front Mem­orial in Coventry. And in 2007, the Prime Minister Tony Blair announced that a special honour was to be presented to all conscripts who served in the mines. This was on the 60th anniversary of the last Bevin Boy being demobbed. Any living Bevin Boys are now officially allowed to take part in the Remembrance Day service at Whitehall.

Many thanks to The Forgotten Conscripts by Warwick H Taylor  and the BBC’s The Coal Industry in Wartime by Dr Martin Johnes.

By 1942, all male British subjects from age 18 were conscripted, except for those with recognised exemptions. But some of the lads in the photos look like children.

Excellent, balanced, piece. I used to work with an ex-Bevin Boy (obviously, he was a great deal older than I) and he was very proud of what he did. Though I can understand the mental struggle/guilt about not being in the fighting forces, working at the coal face has never been a cushy number.

Hello Hels, Coal (and other*) mining is such a dangerous and thankless job that I would honor anyone who performs this important task, whether they were conscripted to do it or not.
--Jim
P.S. The comment box opened for me today!

*We probably would have to exclude 'data mining' from this list.

Fascinating, I had not heard of this history before.

children as young as 14 were normally allowed to work in the mines, but _conscripting_ males for war work only applied to 18 year olds and older. I agree that some of those children looked VERY young and underdeveloped, but I imagine they were already underfed and living in fairly dismal conditions at home.

Not cushy, no :( If a Bevin Boy was killed in a mining accident, his parents or widow received no compensation and those invalided out with disease or broken bones received no pension.

Some lads were not demobilised until 1948 because the country was still short of coal. How many acquired crippling lung disease etc will probably not be known because the records were destroyed.

mining was a relentless, claustrophobic, disease-ridden job, but I imagine the parents were delighted when their beloved sons were not sent to the Western Front. If I was a mother back then, I would have done ANYTHING to save my sons from going into the trenches in France, Belgium etc. (I realise the boys felt differently).

I also did not know the story. That is, until the men eventually formed the Bevin Boys Association in 1989, had their first official Bevin Boys reunion in the same year and had their story published in every main British newpaper.

That was an outrageous treatment of miners, really appalling and regardless of the actual sending them down mines, to not recognise their contributions after the was quite horrible. Thanks for educating us once again.

How could they dishonour coal miners? All the other people in protected occupations worked less hard than miners but received more honour. I am thinking of doctors, engineers and farmers.

Creating the Bevin Boys was a brilliant concept, since coal was urgently required. Yet the lads received the bizarrest response. How can a nation conscript a generation of young men, train them up and send them into coal industry, keep them longer than WW2 went on... and then send them away without uniforms, medals or memorials??

They should have put conscientious objectors in one of these Reserved Occupations, instead of in prison or in the Non-Combatant Corps.

In your first photo of the Bevin Boys they really do look like frightened children. How badly they were treated! Of course, what they did was necessary and important but very badly handled. Although I had heard of the Bevin Boys I never properly knew what they did. It was never in the public domain while I was growing up and I must have thought they were some kind of benign Hitler youth organisation! I just read a Wikipedia article about them and found that former Bevin alumni included: Eric Morecombe, Jimmy Saville, footballer Nat Lofthouse actor/manager Brian Rix and author/dramatists Alun Owen and Peter Shaffer.
In 1950 all the records were destroyed so former Bevin Boys have no proof of what they did and received no demob medals or even letters of thanks.
CLICK HERE for Bazza’s frolicsome Blog ‘To Discover Ice’

You mentioned many important points, but my eyes were rivetted on the name Jimmy Savile born 1926, one of the worst sexual abusers on the planet. Did he really suffer spinal damage down the coal mine? Was he really only 14 at the time?

Creating the Bevin Boys was a brilliant concept

it was perfectly appropriate at the time, yes. I just wish those young conscripts were acknowledged for their contribution to the war effort.

Bishop Auckland's Mining Museum is putting on an art exhibition called War's Forgotten Workforce. It will include powerful artwork created by four former Bevin Boys in response to their experiences in the mining industry.
28th March - 30th September 2018.

many thanks. I don't know the four artists, Ted Holloway, Tom McGuinness, David McClure and John Tipton, but I assume that is your point. The Ted Holloway painting for example, Bevin Boys, is very interesting in its own right.