Dr Henry Lew wrote Smitten by Cath­er­ine, the story of Catherine Rachel Mendes da Costa (1678-1756). Lew was stroll­ing through an auction house looking at furniture, and noticed a sp­ec­ial C18th watercolour copy of a Rubens oil painting, att­rib­uted to Catherine da Costa. Since I am particularly interested in the era when Jews were permitted to return to England in mid C17th, my question became: who was this little known artist?

Lew started the story back in Spain and Portugal, from where the Jews were expelled in the 1490s.  The author focused on the strength of Manasseh Ben Israel whose family had fled to Amsterdam from Madeira in Por­t­ugal. In his 1652 book, The Hope of Israel, Manasseh noted that countries tol­er­ant of Jews were also those that flourish­ed economically. Man­asseh had tried to find a solution to counteract the Chris­tian concept of the oppressed homeless Jew; he reminded Whitehall that Jews always displayed civic loyal­ty. Manasseh was a man of grand vision, and had his portrait done by Rembrandt in 1636. But the man was a realist - he  had to accept less favour­able terms for Jews, if they were to be tolerated in England eg synagogues would only be permitted inside private homes.

Catherine’s father, Fernando Mendes (born 1647), came from the town of Trancoso in Portugal, which had a Jewish community surviving as crypto-Jews. Under difficult circumst­anc­es, Fer­nando eventually moved from Portugal in c1660, first to France and then to England. His timing was excellent; Ol­iv­er Crom­well had allowed Jews to be readmitted as recently as 1656. 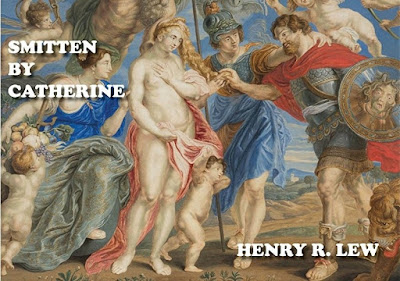 Fernando Mendes was sent to study Medicine at Montpellier University in 1666, graduating with his Doctorate in 1668. In 1669 he returned to London and went into business with his very wealthy first cousin, Alvaro Rodrigues da Costa. Alvaro was a man who was hugely successful trading inside the East India Company. So clearly Dr Mendes never had to rely on Medicine as his sole source of income. The quid pro quo for a successful life was that neither men could be Jewish - Fernando was a Catholic and Alvaro became a Protestant.

Catherine de Braganza came from a senior noble house in Portugal, and lived there until she married King Charles II of England in 1662. An article of the marriage treaty was that Queen Catherine was allowed freely to practise her faith; her chapels in St James’ Palace and Somerset House were the only two places in London where Catholics could legally worship. Once again timing was critical. In 1678 Dr Fernando Mendes was app­oint­ed physician to King Charles II and Queen Catherine de Braganza. Mendes was paid a salary, and was provided with his own apartment in Somerset House, the Queen’s royal palace in London.

Dr Mendes married Isabel Rodriques Marques, daughter of a devout Jewish merchant. Their first baby was born in Somerset House in late 1689. Queen Catherine, who could not have any babies herself, was del­ight­ed with the little girl, had her baptised in the palace and asked that she be called Catherine. Even after King Char­les’ death in 1685, Dr Mendes remained in the Dowager Queen’s service. And Catherine Mendes remained the god-daughter of Queen Catherine.

I am sorry we learn so little about Catherine’s values, hopes and goals in the book. We DO know that she became a pupil of the famous min­iat­urist Bernard Lens III (1682-1740), a painter at the courts of kings George I and George II. In 1707 Lens became the first British artist to replace vellum, the most common material for miniatures, with ivory. (As Catherine did later). Catherine’s copy of Lens’ painting, The Vict­orious Hero Takes Occasion to Conclude Peace, must have been very influential on the young woman.

In 1698 Catherine married her cousin Anthony Moses da Costa, a young merchant, and had three children. Like his father, Anthony became a leading figure in East India trade, and in banking. He was ad­mired by Voltaire, rejected by the Russian Company because of being Jewish and was appointed commissioner for the new American colony of Georgia. 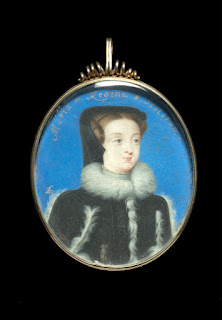 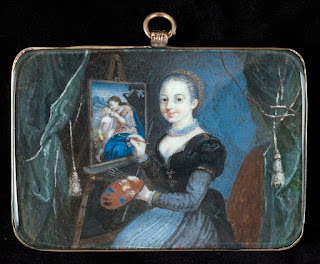 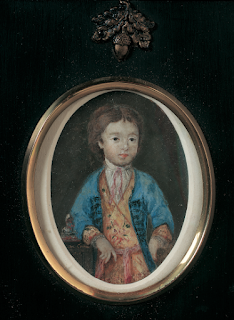 Anthony and Catherine lived in two lovely homes in London. She was exposed to the impressive operas and oratorios of contemporary George Frederick Handel. And she read the Enlightenment philosophers Locke and Hume. Yet Jewish life in England was ambivalent. Catherine knew that Jews often hid their Jewish identity, that inter-marriage and conversion were common, allowing access to important nat­ion­al organisations. Moreover Catherine witnessed impoverished Sephardi Jews, still fleeing persecution. These Jews could become the subject of anti-Semitic stereotypes in England.

Why would a Jewish artist paint a Madonna and Child? Henry Lew re­iterated that Portuguese Marranos had been living as Christ­ians since the 1490s. And remember that Catherine’s father Fernando and her father-in-law Alvaro were both committed Christ­ians. Perhaps Catherine saw Sofonisba Anguis­s­ola’s Madonna and Child (1556, p65) and adored it.

Catherine’s oeuvre was worth examining. Her Self-Portrait was my favourite (1720, p64); the well-dressed artist was busy working at her easel. The Portrait of her Father Dr Fernando Mendes showed a well dressed gentleman in a wig, in front of his impressive library (1721, p46). And her portraits of her son Abraham da Costa (1714, p66) and her Double Portrait of Two Children were sensitive (not dated, p68). Only the portrait of London mer­chant Francis Jacob Salvador (1720, p67) was, in my opinion, not very sensitive.

For Smitten by Catherine, Dr Lew has published a limited edition of 500 copies in hardback. This beautiful book was complete with plates of Cath­er­ine’s art, works by her teacher Bern­ard Lens III, and the original painting by Rubens that Cath­erine cop­ied. And locate an old catalogue of the exhib­it­ion Jewish Artists in England 1656-1956, held at the White­chapel Art Gallery, Nov-Dec 1956.

Thank you for showing us the book. Portrait miniatures in ivory were very popular then and still look great now.

Interesting. We know all about Clara Peeters, Rachel Ruysch, Rosalba Carriera, Élisabeth Vigée Le Brun and others, but not about Catherine da Costa.

She appears to be very talented. I like the painting of her painting.

Portrait miniatures had the advantage of being light, portable and great for memories of loved ones. And ivory gave the skin tones a beautiful luminosity. No wonder they were so popular.

True! When I was at uni in the 1960s, I don't remember too many famous women artists from the late 17th and early 18th centuries. And certainly did not know Catherine da Costa's name.

Yet over the next 40 years, women artists became important themes for PhD theses and art history conference papers. I loved Judith Leyster and Mary Beale, for example.

Talented yes, but not necessarily well known or well paid for her work.

Of course that happened to many artists who were hugely famous during their lifetime, died in miserable poverty and resurrected their careers decades or centuries after. Just think of poor Rembrandt who couldn't sell a single painting later in life and was buried in a mass paupers' grave.

How interesting to read of Catherine's complex life. It is astounding how Jewish families held on to their identity though so much persecution and hiding over the centuries. Da Costa's miniatures show an exceptional degree of spirit and liveliness--she makes you want to know the people she depicts.

The early chapters of the book concentrated on the expulsions from Spain and Portugal, the crypto or Marrano Jews who stayed in Spain and Portugal, those who travelled to other countries to establish stable, welcomed communities and those who pushed hard to be accepted into reluctant nations. Those families were unbelievably brave.

Have you read People of the Book by Geraldine Brooks? You must read it if you haven't already its a great read about the times of which you write . Thank you for another great post.

I have not seen the Brooks novel, but I love medieval haggadot, especially the Sarajevo Haggadah! Back in the years when we had a good income, spouse bought a limited-edition post medieval haggadah at auction. It is one of our treasures.

each generation believes it represents the latest word in knowledge, yet occasionally new knowledge is uncovered and new insights are revealed.

Thanks to you, I just discovered a new woman-painter. Its story touches on two themes that are passionate for me: the Jews of Portuguese descent and the Queen of Catarina of Bragance. Thank you,

many thanks :) I am not sure how well you read English reference books, but Henry Lew's book, Smitten by Cath­er­ine, is well worth pursuing.

Gosh this is fascinating. I have just discovered this talented lady who is one of my ancestors

I wish I could say the same thing *sigh*