Prater­strasse in Leopoldstadt was a thriving cul­tural scene and business district in Vienna. The Nestroyhof Theatre that was financed, designed, owned and patronised by the most acculturated Austrian Jews in the early C20th. This special site of Vienna’s her­itage was an example of arch­it­ect­ure that championed C20th urban design. Alas some Nestroyhof shows were forbidden by state censor­ship, due to its Jewish stars and the radical themes.

In 1904 the Munich playwright Franz Wedekind wrote one of his Lulu plays, called Pandora's Box, which depicted a society divided by greed. Karl Kraus was a Jewish born Vien­nese play­wright and poet who, in 1905, arranged for in­vitation-only performan­ces of Franz Wede­kind's play at Nes­troyhof. The censors were on alert!

The first motion pictures became very styl­ised, in­fluenced by pro­v­ocat­ive German expressionists. Wedekind’s 1904 play formed the basis for Viennese director G W Pabst's famous silent film Pand­ora's Box in 1929. star­ring Louise Brooks as Lulu [as well as Alban Berg's opera Lulu 1937, one of the masterpieces of C20th opera]. Fritz Kohn-Kortner (1892–1970) was a Jewish Austrian stage-actor who became one of the Weimar Rep­ub­lic's most famous silent actors, appearing in clas­sics during 1920-21. But it was his role as Dr Schön in GW Pabst's silent film Pandora's Box 1929 that turned him into a star. 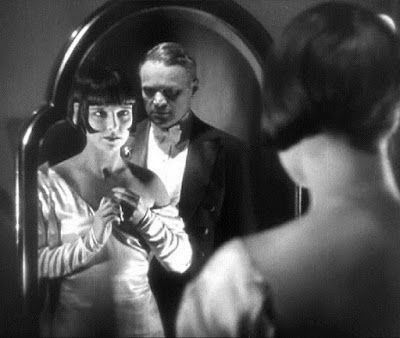 Pandora’s Box was the German film in which the American Louise Brooks (1906–1985) first starred, but who was this Louise Brooks? Born in Kansas, Louise Brooks began her creative life as a dancer. At 15 she left home to travel to New York to study with a modern dance company. She progressed swiftly and took some lead roles. But she was asked to leave, apparently because of either her behaviour or her attitude!! She found work first as a showgirl and then in 1925 she had started in cinema, albeit in small roles.

The bob hairdo had started during WWI when women workers cut their hair short for practical purposes. Post-war, the bob emerged as a modern and fash­ion trend, and soon Coco Chanel, Clara Bow and Louise Brooks all cut their hair short. 1920s Flappers’ style began to re­flect a break from restrict­ing trad­itions - hemlines rose, waist­lines dropped and shapes became boyish.

Brooks’ career in the USA was limited. Enticed to Europe, she liked what she saw. In the 1920s Brooks wrote: Sex was the bus­in­ess of the town. At Berlin’s Eden Hotel where I lived, the cafe bar was lined with higher-priced trollops. The economy girls walked the street outside. On the corner stood the girls in boots, advert­ising flagellation. Actor's agents pimped for the ladies in luxury apart­ments in the Bav­arian Quarter. Race track touts at the Hoppe­garten arranged org­ies for sportsmen. Josephine Baker wore just bananas!

It was the films she made in Europe, just before the sound era, that gave Brooks a fixed part of cinema history. In 1928 she was in a sil­­ent film called A Girl in Every Port, playing a carn­ival perf­ormer who almost destroyed the relationship between two men. German director GW Pabst saw the film and was con­vin­ced he had found the right actress for his controversial new film, Pand­ora’s Box.

Brooks was still under contract to Paramount: the director GW Pabst contacted the studio, ask­ing for permission to use her in the film. When Paramount’s chief told Brooks about Pabst’s offer, she accepted it immediately, without reading the script. Timing is everything! Pabst had almost given up on finding his ideal Lulu and was about to offer the role to the worldly Marlene Dietrich, reluctantly.

In the film, Brooks’ hair was cut in a graceful black bob. Lulu was kept by a middle-aged newspaper magnate, Schon (Fritz Kort­ner), whose son was equally infatuated with her. Clearly Pabst found an actress who could capture all of Lulu’s paradoxes.

Thank you to Roger Ebert’s book Great Movies. Life could not permit women much freedom, so Brooks had to be ground down and punished for her joy in her films. At the end of Pandora's Box, she was killed while in the embrace of Jack the Ripper! It implied that any wo­man who looked that great was bound to fail.

The film was poorly received when it was rel­eased, and Brooks was singled out for criticism. Nonetheless she made two more films in Europe: Diary of a Lost Girl, a tale of sexual hypocrisy and redemption with Pabst, and Prix de Beaute, co-writ­ten by Pabst. 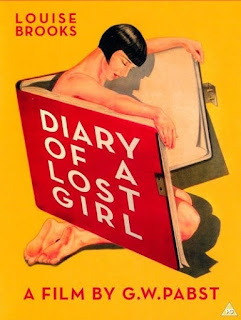 Diary of a Lost Girl, poster

The arrival of talkies in late 1929 produced a final artistic flour­ish of German film, before the collapse of the Weimar Republic in 1933. Sound production and distribution were quickly taken up and soon Germany had 3,800 cinemas with sound. Pabst's version of Bertolt Brecht's The Three-penny Opera 1931 and Lang's M 1931 were landmark talkies.

But Brooks saw no future for herself in Europe in the talkies era.  Despite having left Hollywood a few years earlier in a bad sit­uat­ion, she returned to the USA in 1931.

Hollywood was changing. A strong relat­ion­ship between popular fas­h­ion and Hollywood films started in the 1930s when many more families were going to the pictures than ever before, even during the Dep­r­es­sion. Hollywood was encouraging lipstick and trousers for women. The impact of strong-willed celeb­rit­ies on women might have been an escape from the diff­iculties of the Depres­s­ion.

Brooks’ lovers included Charles Chaplin and CBS president William Paley, plus the clients of a New York escort agency she work­ed for in the 1940s. She was too wild before going to Europe and she drank too much after returning home ☹ Brooks moved to Roch­ester in 1956, leading a reclusive life ded­ic­ated to writing for film journals. She wrote Lulu in Hollywood, publ­ish­ed in 1982 and died at 78 in 1985.

Brooks’ great films that were made in Germany, Pandora's Box and Diary of a Lost Girl, have been restored and are available in black and white video. Brooks’ influence, particularly on the character of Lulu, continued to flourish for decades. The two main document­aries that came out were Look­ing for Lulu narrated by Shirley MacLaine, and Lulu in Berlin.

A newly digit­ally restored version of Pandora’s Box, with a string quart­et score from local composer Jen Anderson, is now in Australia. The first scree­ning was at Melbourne’s Astor Theatre, a grand art deco cinema. Now see Pandora’s Box in Can­berra in July or Port Fairy in October 2017. In London the Classic Cinema Club of Ealing already screened the film this year, while Paris is showing the film at La cinémathèque française, this week.

This is absolutely fascinating; I have never heard of Louise Brooks! Yet she was obviously someone of spirit, a human to be recommened with

Look at the lush photos in Gods and Foolish Grandeur blog. I wish I looked like Miss Brooks at that age.

Exactly so! The writers and designers of Phryne Fisher must have known Louise Brooks very well. The dates were identical (1928-9), the bobbed hairdo is identical, both loved the Jazz Age clothes and music, both enjoyed affairs with men and both really loved their cocktails.

being a young woman with a lot of spirit could be problematic. Her three great qualities - independence, gorgeous face and a body that was alluring to every man in Europe (etc etc) made her a highly desirable actress but a threat to the Hollywood establishment. Actresses in the 1930s and 40s probably had a happier professional life than equally spirited silent-actresses.

I had a good look at Gods and Foolish Grandeur. Impressive photos of a lovely young actress.. thanks.

I don't think I knew the name of Louise Brooks but hers is a rather sad story. I found some interesting things on You Tube. Pandora's Box is there in full in a very good condition copy. Also a BBC Arena documentary from 1986. But most intriguing was 'Louise Brooks in Colour', a series of photographs. In every one she seems to have an expression of hurt in her eyes - even when she is half-smiling. See: https://www.youtube.com/watch?v=3yQomYChzUQ
Incidentally, I loved her phrase "high-priced trollops" - almost an oxymoron!
CLICK HERE for Bazza’s mordant Blog ‘To Discover Ice’

Hello Hels, Louise Brooks was one of the true icons of the Silent era. How lucky we are today to have representative examples of her films, but it always strikes me when considering silent films how stupid people were to let the vast majority slip away.
--Jim

re the expression of hurt, it is ambivalent I think. On one hand, Brooks said noone could destroy her spirit and independence; that no male boss could control her behaviour and her values. On the other hand her film career DID end and her joy in life was reduced.

agreed. It is so offensive that THIS generation is the only one that can create great films, architecture, music, science, art, landscape design and every other thing. Firstly we destroy everything beautiful from earlier generations (eg Victorian homes) and replace it with Modern Brutal (eg concrete blocks of flats). Secondly we don't teach history in school any longer and no-one learns from history in the arts and sciences.

I forgot to agree with you about looking good. Brooks looked very very good!
Even fully dressed: http://1.bp.blogspot.com/-l66gIHrmPwU/UgmNuI2iDiI/AAAAAAAADCE/b98zg7pZaWk/s1600/Brooks2.jpg