From 1725, when Russian Czar Peter the Great sent Vit­us Bering to explore the Alaskan coast, Russia started to focus on the reg­ion. So it surprised no-one that into the C19th, Russian Alaska be­came a centre of international trade. Russian merchants were drawn to Alaska for the treasured walrus iv­ory and the valuable sea otter fur, acquired by trading with the reg­ion’s indig­enous peoples. The Russian-American Company/RAC, Russia's first joint-stock company, was started by C18th Russian businessmen, risk-taking travellers and entre­preneurs.

Like the East India Co. and the Hudson Bay Co. in Canada, the RAC controlled all of Alaska’s mines and minerals and could in­dep­end­ently enter into trade agree­ments with other count­ries. These privileges were granted by the Russian imperial govern­ment and in return, the govern­ment collected massive taxes from the com­pany. Even the tsars and their family members were among the share-holders. 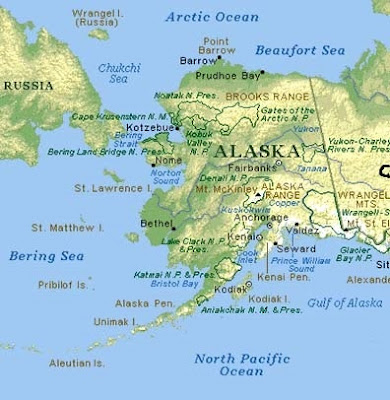 Alaska: between Canada to the east and Russia to the west

The first governor of the Russian settlements in America had been a mer­chant called Alexander Baranov (1747–1819). He built schools and fact­ories, taught the native people to plant potatoes, expanded the sea otter trade and built shipyards. Under the first governor, the Company brought in enormous revenues. When Baranov resigned in 1817, he was replaced by Navy Captain Ludwig von Hagemeister, who brought with him new employees and shareholders from milit­ary circles. The new masters set HUGE salaries for themselves.

The Russians bought fur from the local population for half price, so over the next 20 years, almost all the sea otters disappeared. When Alaska lost its most profitable trade, the locals staged uprisings that the Russians quickly quashed. Then the officers had to look for other sources of revenue – Chinese fabrics, ice, coal and tea in part­icular. And, it was suggested, people already knew about poss­ible gold deposits in the area. These were products that the southern parts of the USA needed.

In the capital, Novo Arkhangelsk, Russians were doing well. Ships and factories were built, and coal was mined. But as the USA expand­ed westward in the early 1800s, Amer­ic­ans set themselves up in competit­ion with Russian expl­orers and traders. Unfortunately for St Petersburg, Russia lacked the financial resources to support major settlements or a military presence along North America’s Pacific coast; permanent Russian settlers in Alaska rarely rose above 400.

Then the Crimean War broke out in October 1853, and Britain, France and Turkey went into an alliance against Russia. It became clear that Russia could neith­er supply nor defend Alaska, given that the sea routes were controlled by the allies’ ships. Defeat in the Crim­ean War in Feb 1856 further reduced Russian confidence in the north Pacific.. to the point where the Russians had a realistic fear that the British would totally block Alaska.

At the very time that tension between Russia and Britain grew, Russian relations with the American authorities were warming up. And since the idea of selling Alaska seemed to be mutually beneficial to both Russia and the USA, Russia offered to sell Alaska to the USA in 1859. Anything that would block Russia’s greatest rival in the Pacific, Great Brit­ain! But the time was not right for the USA. The looming American Civil War (1861-5) delayed the sale.

Why didn’t Russia offer Alaska to the more sensible, neighbouring country, Canada? I can think of two reasons. Firstly there was no central government on the West side of Canada yet, even though four eastern provinces already confederated in 1867. Secondly Canada was part of the British Empire, Russia’s worst enemy at the time.


While the Russian and American officials were working on a deal, public opinion in both coun­tries expressed opposition. The Russians asked how they could give away land that they had put so much effort and time into dev­el­oping, the land where gold mines had been found. The Americans asked why they needed a frozen, useless land with 50,000 wild indigenous people. The American Congress may have also dis­ap­proved of the purchase. 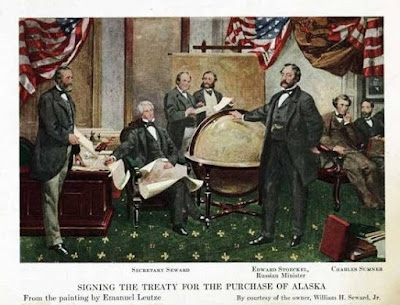 It was only after the Civil War that Russia’s envoy in Washington, Baron Eduard de Stoeckl, could move ahead on behalf of the Tsar. Stoeckl got together with American Secretary of State William Seward in Washing­ton. In March 1867, Seward formally agreed to a proposal to purchase the 1.5 million hec­tares of Russian prop­er­ty in Al­aska for $7.2 million. The Senate approved the treaty of purchase and President Andrew Johnson signed the treaty in May. Alaska was form­ally trans­fer­red to the USA in Oct 1867. This $7.2 million deal, a rid­ic­ulously small sum, ended Russia’s presence in North America and ensured American access to the Pacific northern rim.


The formal handover of the land took place in Novo Arkhang­el­sk. The Am­eric­an and Russian soldiers lined up next to the flagpole, the Russian flag went down and the canons fired. Afterward, the Americ­ans started requisitioning the town’s buildings, and renamed the town as Sitka. The hundreds of Russians who decided not to take American citizenship had to flee on mer­chant ships.

For decades after its purchase, the USA paid little attention to Al­aska; the area was governed under military, naval or Treasury rule. Seeking a way to impose American mining laws, the USA only const­ituted a civil gov­ernment in 1884. The timing was perfect, given that a gold rush was exploding in Alaska. The Klond­ike Gold Rush started in 1896, bring­ing the USA hundreds of mill­ions of dollars. Of course the Rus­sians were devast­ated.  Even the previously scept­ical Am­er­ic­ans were thrilled. William Seward had really only been vin­dic­ated when Alaska became the gateway to the Klondike gold fields!

I would argue that the Russians had made the correct decision back in 1867; Alaska had never been “stolen” by American soldiers or pol­it­icians. How often, in the light of subsequent events, do nations look back at earlier decisions with regret?

The sale of Alaska had clearly marked the end of Russian efforts to expand trade and settlements to the Pacific coast of North America; it was therefore an important step in the USA’s rise as a great power in the Asia-Pacific region. But that begs another question. How would relations between the world’s largest powers have develop­ed, had Russia not sold Alaska in its time of military and financial difficulties?

Ah, so that is why that jutting out big bit at the top is not Canadian but American. Alaska is a very long way from Moscow and on another continental mass, so it was perhaps inevitable. Wouldn't it be interesting now if Alaska was Russian owned. Canada with a Russian border. I am sure PM Trudeau would be first class at rapprochement with Russia.

Alaska has always seemed to be in the backwaters of history and of world events. Thanks for shining some light on Alaska's interesting past. Like the Louisiana Purchase, it was a good deal for the USA.
CLICK HERE for Bazza’s mordant Blog ‘To Discover Ice’

When my parents waited to leave Eastern Europe, they could choose Australia, South Africa, Canada or Argentina. Imagine if we had ended up in Russian Alaska instead.

Hello Hels, Between gold and oil, the U.S. has certainly got its money out of Alaska, although I wonder sometimes what a good steward it has been. I have read conflicting reports on the condition of the Alaska pipeline, and the amount of environmental trauma it has caused. There is also the issue that the draining of Alaskan petroleum deposits set back work on alternate fuel sources, while eliminating large reserves of a material perhaps too precious to simply burn up in a few years.
--Jim

Alaska was indeed a very long way from Moscow, crossing a ginormous continental mass before you get there. But so is Vladivostok (9,288 km away), and yet Vladivostok is a very busy Russian port with 650,000 people. Strategic position was more important than cold climate, local populations' wishes, difficulty in travelling etc etc. Other countries (eg Pakistan) have been split geographically in the past, but I bet Canada is kicking itself.

it was a great deal for the USA! But the Americans didn't realise it at the time.

Nowadays, even if you have travelled in most states of the USA, it is probable that you still have never been to Alaska. Alaska needs more publicity.

I don't think Alaska was ever going to be handing out thousands visas as part of a large population drive, in either the 19th century or when your parents were waiting for visas in the years after WW2. You were much more likely to end up with a safe haven in Cuba or Jamaica.

the ruining of the environment and the draining of Alaskan petroleum deposits instead of alternate fuel sources are tragic outcomes that could not have been predicted when Russia was making money from walrus iv­ory and sea otter fur.

But they certainly have been known about for the last few decades. Pipe lines over thousands of ks from Alaska down into the USA are crises waiting to happen.

Alaskan cruises are the most popular choice in lots of shipping companies. Naturally.

I was surprised, so I had a look at two of the companies that do Alaskan cruises. Sounds excellent.

"Experience more of the gorgeous Inside Passage on a seven-day Alaska cruise vacation to Sitka, Juneau and Skagway. Departing from Vancouver, sail through the British Columbia and Alaska portions of this breathtaking waterway en route to dazzling glaciers and friendly frontier ports." Princess Line.