James Les Darcy (1895-1917) was born near Maitland in NSW, one of ten children of a struggling Irish Catholic family. Leaving primary school in 1907, Les worked then was apprenticed at 15 to a local black­smith. As his father was at times unemployed, and his elder brother was partly crippled, Les had to help his very large family.

Darcy made his first money in the boxing ring at 14. In 1912-13 he won several fights at Newcastle and Maitland. In Nov 1913 he lost to the Australian welterweight champion Robert Whitelaw, but his performance did att­ract­ the attention of the Sydney promoters. In July 1914 he appeared for the first time at the Sydney Stadium, against the Amer­ican Fritz Holl­and. Darcy was already a local hero — his supporters came from Maitland in two special trains. When Holland won on points there was a riot. But the experts need not have worried since Darcy had impressed the sports promoter Snowy Baker. He became the stadium's leading draw-card.

WW1 did not slow him down. In Jan 1915 Darcy fought the American Jeff Smith in a world welter­weight championship. He lost sensationally, but this only enhanced his fame. That defeat was his last: by Sept 1916 he had won 22 consecutive fights! He was now comparatively well off — each contest was netting him c£300, and he was also being paid for exhibitions and for acting in a film. 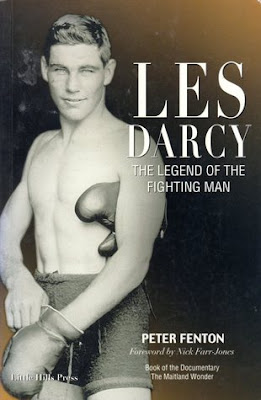 Les Darcy: Legend of the Fighting Man
by Peter Fenton, published in 1995

The political atmosphere was radically altered by the Easter Week Rising in Dublin and the Australian prime minister’s commitment to conscription. Passports were being refused to men of military age. Darcy began to come under pressure to enlist, but his ambivalence to war was aggravated by his Irish-Catholic background.

He wanted 4-5 fights in the USA to make his family financially secure, and then he would go to Canada or England to enlist. He sailed clandestinely from Newcastle in Oct 1916, the day before the national conscript­ion referendum. The patriotic press denounced him as a shirker.

In New York a major fight was arranged, but it was banned by New York Gov­ern­or Whitman, because of the manner in which Darcy had left Aust­ral­ia. The decision was disastrous for Darcy: American promoters began to lose interest in him, so he gave some vaudeville exhib­itions instead. After a bout he had arranged in Louisiana was also banned, Darcy took out US citizenship and vol­unteered for the American army. Yet another fight was arranged in Memphis Tennessee, and Darcy's call-up was deferred so that he could train.

In late April 1917 Darcy collapsed. He was admitted to hospital with septicaemia and endocarditis; his tonsils were removed but he developed pneumonia and died, aged 21; his fiancée by his side. His body was brought back to Australia and, after immense funeral processions in San Francisco and Sydney, was buried in the East Maitland cemetery.

Darcy had all the makings of a folk hero. His remarkable ring record, losing only 4 professional fights and never being knocked out, was associated with his extraordinary physique: a muscular body apparently impervious to the heaviest blows and a reach greater than his height (170 cm) suggested. He neither smoked nor drank, he spent most of his income on his family and he attended Mass most mornings.

His decision to leave Australia secretly, in breach of the War Prec­aut­ions Act, provided the controversy and the enemies, without which no hero-figure is complete: his lonely death gave him an aura of martyrdom. So powerful a legend did he become that fifty years after his death, flags flew at half-mast.. and a memorial at his birth­place was unveiled by a former Governor-General.

Three separate issues seemed to me to have worked against Darcy enlist­ing. Firstly he was seen as having been maligned due to his Irish-Catholic working-class heritage. Secondly he said he tried to enlist but he was under-age and his mother refused her consent. Thirdly he was one of 10 children of an Irish Catholic share-farming family, so family money would always be desperately needed. Only winning boxing championships would guarantee that income.

Was Darcy eluding conscription in Australia? No! A conscription referendum provoked furious debate, and when people voted in Oct 1916, the proposal was narrowly defeated. In 1917 the Prime Minister called for yet another conscription referendum. This cam­paign was just as heated as the first, with the most prom­in­ent anti-conscription activist being the Catholic Archbishop of Melbourne, Dr Mannix. In Dec 1917 the nation again voted No.

Only by fighting in the USA, Darcy believed, could he further his career and finally guarantee his family’s financial future. Even though the press vilified him as a coward and deserter! But let us be clear - when he secretly stowed away to the USA on an oil tanker, the SS Cushing, there was NO conscription in Australia. Darcy may well have been leaving his homeland without a passport, but he was hardly in breach of critical wartime regulat­ions.

It was said that Americans were also caught up in war fever in 1916. Definitely it was the American State Governor who banned him from boxing! Definitely the American promoters abandoned him and American boxing fans sent him white feathers! This does not make sense at all. The USA was neutral in WW1 (until April 1917) and did not have conscription for its own citizens. What did Americans care if a Maitland lad did or did not enlist in the Australian army?


It must have been effective. Darcy volunteered for the US Army to avoid further criticism. 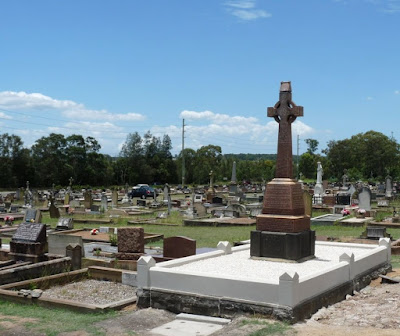 When Darcy died, he lay in state in a Sydney chapel. Seen as having been targeted by the Establishment due to his Irish-Catholic heritage, the funeral became an occasion for massive anti-conscription protest. Some 700,000 citizens followed his funeral procession from Sydney to Maitland (165 ks). A monument over Darcy’s grave in Maitland Cemet­ery was erected in his memory later that year. Darcy was inducted into the International Boxing Hall of Fame in 1993 and was one of the first inducted into the Australian National Boxing Hall of Fame in 2003.

My question remains. How did Darcy go so quickly from a heroic boxing success (1914-15) to a vilified coward/shirker (1916), a secret escapee to the USA (Oct 1916) and new citizen of that country (April 1917), and finally death and national sporting hero status back in Australia (April 1917)?

I would not have been quick to sign up during the First World War and can't blame anyone feeling the same way (even though James Darcy seemed not to be avoiding that). My answer to your final question would probably have to be "Look to the tabloid press"!
CLICK HERE for Bazza’s trenchant Blog ‘To Discover Ice’

I didn't realise he died so young and I assumed he had a reasonably long and successful career to become so famous. Funny the things that come to you mind in wakeful hours in bed. I was thinking of my maternal grandfather who was born in 1896, making him 19 in 1915. Why did he not go to war? I suppose it was because he was a market gardener and that was an important occupation.

Why are some sports names instantly recognisable, even 100 years later?? Two terrible events happened to champion Australian athletes in the USA.

In 1917 Les Darcy, as we know, was the greatest boxer to come out of Australia. He died aged 21 from a bizarre medical crisis in the USA! Presumably, Australians believed, the American medical care must have been negligent. Or criminal.

In 1931-2, Australian champion horse Phar Lap was winning almost every race in the USA when he suddenly died. Every Australian believed then (and now) that the horse was poisoned by desperate American competitors.

Even if these rumours were totally wrong, the two national histories remain inviolate.

my grandfather was born in 1898, so I know exactly the generation you are referring to.

Imagine the terrible pressure individual 18 year olds had to deal with. When the volunteers of 1914 and 1915 were wounded or dead, the AIF became desperate for new men i.e conscription. The first referendum failed, just, in October 1916. The second referendum failed in Dec 1917, but with a clearer result.

Hello Hels, While it seems that some people can get away with every outrage and still prosper (for examples see many current world politicians), the truth is that it is easy to be tainted by even the suspicion of not being on the up and up. Also, public opinion can turn on a dime, so it is best not to give people any ammunition at all. It is a pity that Darcy had to die so young with out being given a chance to prove himself, either as an athlete or as a person.
--Jim

The Easter Week Rising in Dublin and the Australian prime minister’s commitment to conscription hurt devout Catholic families. Archbishop Mannix was loud in the campaigns opposing the 1916 and 1917 WW1 conscription referendums. Plus he supported the cause for home rule in Ireland.

I wouldn't be surprised if there were many 'accidental deaths' that, if only the world knew the truth, would cause outrage. But we won't ever know :-(

it is the speedy changing of public opinion that gets me every time. I have just written a blog post about John Profumo, the much respected Secretary of State for War in Harold Macmillan's government. Then he was caught with a teenage show girl, became a figure of shame and possible security breaches with Russia, lost his seat in Parliament, then the entire government collapsed because of the Profumo Affair. Later he went full time into charity work, earned a Queen's honour and became a highly respected member of the upper classes again.

By the way how do you not give people any ammunition? If you as much as scratch your bum, the President will be tweeting it tonight :(

*nod* Even though the conscription referenda both failed, I agree that devout Catholic families must have been very conflicted. Even if Les Darcy himself would have wanted to join the army, his mother wouldn't give her consent.

working class lads in very big families were largely poorly fed and didn't receive proper medical attention anyhow. So even minor infections etc could have been responsible for many early deaths. But accidental, no. More likely accidental-on-purpose!

Helen, this comes from The Theory of Objects. Trent Dalton wrote that when Darcy was hospitalised in April 1917, his fiancee Winnie O'Sullivan was already in transit to the USA. On the 24th May, she went into his Memphis hospital room and they spent his last day alive together. When Winnie accompanied Les' body back to Australia, she snipped off a lock of his hair and later placed it in a gold mourning locket, made for her by her family.

Winnie married four years later and had two sons. One of these sons donated the gold locket, which he had found in Winnie's personal effects, to the National Museum in 2006.

the end was so sudden and so sad :( As we can see from the portrait above, Les was young, fit, good looking, athletic and in love. And poor Winnie, she had to try and resume normal life back in Australia :( I bet that gold mourning locket was a precious momento.