The Cliveden House land in the Chiltern Hills Bucks was owned by Geoffrey de Clyve­den in 1237. By 1300 it had passed to his son William who owned mills along the tree-less chalk escarp­ment high above the Thames. By 1569 a lodge existed on the site along with many acres of land.

It was on this very high, expos­ed site that George Villiers, 2nd Duke of Buckingham (1628–1687) chose to build the first Clive­den house. The Duke of Buckingham pulled down the ear­l­ier buildings and chose Captain William Winde as his architect. Winde designed a four-storey house above an arcaded terrace.

Although the Duke's intention was to use Cliveden as a hunting lodge, he later housed his mistress Anna, Countess of Shrewsbury there. In the Duke's eastern garden, flints have been laid in the lawn as a rap­ier dated 1668, to commemorate the duel between the Duke and his mistress' husband Lord Shrewsbury. Lord Shrews­bury died of his wounds, as told by Samuel Pepys in his diary.

John Evelyn, another diarist, visited the Duke at Cliveden in 1679 and recorded the following impression in his diary: "I went to Clifden of the Duke of Buckingham. On the terrace is a circular view of the utmost verge of the Horizon which with the serpen­tining of the Thames, is admir­able and surprising. The cloisters, gardens and avenue through the wood august and stately.”

There were other significant renovations done to the house after the original 1666 version. But the most important was that designed by Sir Charles Barry in 1851, to replace the house destroyed by a terr­ible fire in 1795. Barry was a perfect choice; he had won the com­mission to design the new Palace of Westminster, way back in 1836.

The present Cliveden House is a blend of the English and Italian Palladian styles. The Victorian three-storey mansion sits on a 120m long, 6m high arcaded terrace/viewing platform which remains from the mid-C17t house. The house facade is covered in Roman cement, with terracotta balusters, capitals, keystones and finials. The roof of the man­sion is for strolling, and there is a circular view, above the tree-line, that includ­es Windsor Castle.

Whereas Charles Barry's original interior showed off a square entr­an­ce hall, a morning room and a separate stairwell, Lord Astor want­ed a more impressive entrance to Cliveden. He chose to have all three rooms enlarged into one, very large Great Hall. His aim was to make the interior as much like an Italian palazzo as possible. Most English of all is the library, panelled in gorgeous cedar wood. 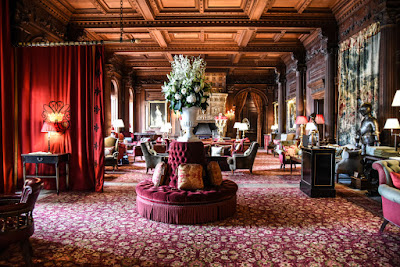 In 1984–86 the exterior of the mansion was overhauled and a new lead roof installed by the National Trust, while interior repairs were carried out by Cliveden Hotel. In 2013 further restoration work on the main house was carried out including the windows and doors.

I knew all about Cliveden’s architecture and decorative arts from both lec­tures and a tour. But I had forgotten about the Cliveden Set. After their marriage, American expats Nancy (nee Langhorne) and 2nd Vis­count Wal­dorf Astor married in 1906 and moved in­to Cliveden, a wedding gift from Astor's father. Nancy Astor became a prominent hostess at Clive­den House for a social elite; she att­racted a group of upper class and very in­fl­uential people in post-WW1.

Nancy Astor was the first female MP in Brit­ain, Waldorf Astor owned The Observer, Geof­frey Dawson was edit­or of The Times, Samuel Hoare was Secretary of State for Foreign Affairs, Edward Wood Lord Halifax was a government minister and Edward Fitzroy was Speaker of the Commons. Alas Nancy Astor was anti-black, anti-Semitic and, as the 1930s went on, increasingly pro-German. So were her most of her powerful colleagues in the Cliveden Set. 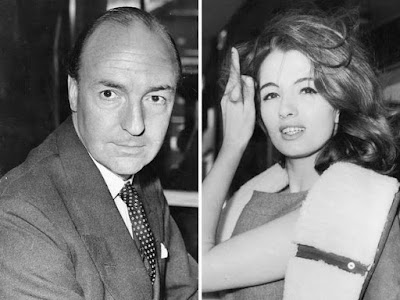 And I had forgotten that the Profumo Affair, an event that rocked all British countries in 1961, had started at Cliveden. There was a summer party at the Cliveden estate of 3rd Viscount William Astor in 1961; this was the very same weekend that Stephen Ward, Astor’s resid­ential osteopath, had a party. Lord Astor’s friends were mainly aristoc­ratic eg the Conservative politician and British Secretary of State for War John Profumo (1915–2006). Ward’s friends were less than aristo­cratic, including the sexy dancer Christine Keeler and her lover, the Russian military attaché Yevgeny Ivanov.

To cool down from the summer heat, Lord Astor walked his guests to over to the family pool where Profumo caught a sight of Christine Keeler swimming naked. It was love at first sight! Through Ward’s connections, the very married Profumo began an affair with Keeler, and rumours of their involvement soon began to spread. In March 1963 Profumo lied about the affair to Parliament, stating that he had never had sexual relations with that woman, with Miss Keeler. A short time later Profumo resigned, admitting with deep remorse that he had deceived the House of Commons.

The real tragedy was not that extra-marital sex took place at Clive­den House, nor that the British Secretary of State for War was forc­ed to admit that he had deceived Mrs Profumo. The real tragedy for the Conservatives was that the scandal led to the eventual downfall of Prime Minister Harold Macmillan’s government. The op­p­os­ition Lab­our Party soon defeated the Conservatives in a national elec­tion.

The personal results were strangely unequal. Profumo began a career in charity and was honoured by the queen in 1975 for his work. He never spoke about politics in public again. Step­hen Ward was con­victed on two counts of living off immoral ear­nings, took an over-dose of sleeping pills and died three days later. After Christ­ine Keeler’s release from prison in 1964 and two brief marriages, the ex-showgirl largely lived alone.

It was never proven that Yevgeny Ivanov had attempted to entrap Pro­fumo or to use Keeler as an agent. And Profumo’s relationship with Ms Keeler was never proven to lead to a breach of British national sec­urity in Russia. Ivanov was recalled to Moscow in Dec 1962 and although his naval career continued back in the Soviet Union, he was assigned to a distant fleet well away from the centres of power.

It is a wonderful story. How could it not be with politics, spies, sex, deceit, scandal, moral judgement......I could go on. I never realised that this took place at Cliveden. I don't know how I missed that important part of the story.

I would rather my beautiful stately home be used for inept middle aged groping than for pro-Nazi anti-Semitic planning.

agree with Andrew and Joseph above, and worse things are happening in London NOW.
Profumo was set up and the whole thing had shifty politics behind it.
"I did not have sexual relations with that woman" - oh how many times have we heard that.
and the fabulous court-room riposte of Miss Mandy Rice-Davies - "Well he would say that wouldn't he" has gone into legend and is oft quoted.

Those girls were only 19 and 20, at that time an age like that was not as hardened as it is now, even for them as 'working girls'.

The massive wealth behind rockpiles like Cliveden was not sustainable and offloading a huge lead roof to The National Trust was often a desperate move. A wonderful book about this by James Lees-Milne 'Ancestral Voices' is one of my favourite reads. Invalided post WW2 he was engaged by the NT, and tootled round these rockpiles to assess them and there are scenes like Finding the Duke in the kitchen with the butler because that was the only room of the 200 they could heat, and the duke excited that they had come into possession of some eggs.
The East Melbourne site of our Melbourne HILTON was previously a Cliveden, and demolished.
Do go here aha William J T 'Big' Clarke for the gen, another favourite book.

I was a naive high school student when the Profumo Scandal started in 1961 and continued for a few years. Nonetheless, we had rousing speeches from the head mistress about religious morality, parliamentary propriety, spies etc etc. I didn't know what extra-marital sex with a show girl was, but I knew that Profumo was the first person EVER to lie in Parliament.

There was a particular brand of appeasement Astor and her Cliveden Set embraced. The epic house parties there that welcomed FD Roosevelt, Henry Ford, Asquith and Churchill. By the 1930s, the Astors frequently invited newspaper editors of the Times, ambassador from Germany Joachim von Ribbentrop, and the Marquess of Lothian. They agreed that Germany marching into the Rhineland was merely walking into their own backyard.

The Cliveden Set was ridiculed in some papers as a kind of upper-class pro-Hitler cabal. It was felt that the house was becoming a second, covert Foreign Office, with the expertise of civil servants being trounced by cocktail party consensus. For 18 months, Cliveden has been the centre of friendship with German influence. And Ribbentrop reported to Hitler on the likelihood of England and Germany forging a lasting agreement.

Ancestral Voices: Diaries 1942-1943 by James Lees-Milne is a great reference. I like the publishers who called Lees-Milne a snobbish member of the "effetely quaint British upper class", in a great position to visit stately homes and comment on them. But not just the architecture.

His connections were impeccable. Lees-Milne was visiting Sir Oswald and Diana Mosley when King Edward VIII "tragically" abdicated. He had loved her brother Tom Mitford when they were at Eton College, and was devastated when Tom was killed in war during 1945. He married Alvilde Viscountess Chaplin, and through Alvilde, he became close to Vita Sackville-West and her set.

Cliveden will forever be associated with Profumo - all the ingredients of a good story! Actually, Profumo was not the first to lie to Parliament - and he certainly wasn't the last.

It really did have all the ingredients of a great story! Politicians naturally lie all the time, but it seems there is lying and then there is LYING. In the long run, it seems that Parliament was less upset about extra-marital affairs. Rather they were far more upset about a] Cold War betrayal of the British nation, b] secrets about missile ­movements in the West that were later passed to the Soviets, and c] immoral earnings from Keeeler selling the story to newspapers.

I remember this affair so well. I once went to Cliveden on business and they treated me like a king! I was seated in the Great Hall and they brought me a tray of coffee and petit fours. I actually thought that I had been mistaken for someone else - but no, that was their standard hospitality. There is something very regal about being there.
Mandy Rice-Davies married and went to live in Israel and converted to Judaism after what she termed "a slow descent into respectability". She died in 2014. John Profumo dedicated the rest of his life to helping others by working in Toynbee Hall. He had totally redeemed himself.
CLICK HERE for Bazza’s fulsome Blog ‘To Discover Ice’

my brothers thought Mandy Rice Davies was stunning back in the years when she gave evidence in the trial of Stephen Ward. Not only did she confirm that the osteopath was living off the immoral earnings of Keeler and herself, but she exposed a web of intrigue involving the upper ranks of British society.

She became most famous/infamous for proving in court that she had an affair with 3rd Viscount Lord William Astor. Cliveden saw some action over the years, didn't it?