In my Gap Year programme abroad in 1966, there were 13 English speakers and 110 Spanish speakers, so I had to learn enough Spanish to survive. And quickly! The reward would be that eventually I could travel around South America and would be shown the joys of Argentina, Peru, Paraguay and Uruguay. The trip didn’t happen, but I have always been alert to South American history and architecture ever since.

Italian immigrant and cotton businessman Luis Barolo (1869-1922) arrived in Argentina in 1890. Believing that Europe had begun drift­ing towards a collapse, Luis Barolo wanted to build in the New World. So he commis­sion­ed the It­al­­ian architect Mario Palanti (1885–1978) to design a fabulous build­ing in Buenos Aires. Palanti had been educated in Milan and moved to Buenos Aires in 1909. Together Barolo and Palanti would pro­vide a place to house the bones of the jewel of European culture, Dante Alighieri. If that failed, they would have at least created a safe hav­en for the poet’s soul. The building would be called Palacio Barolo, based on the C14th epic poem Divine Comedy. 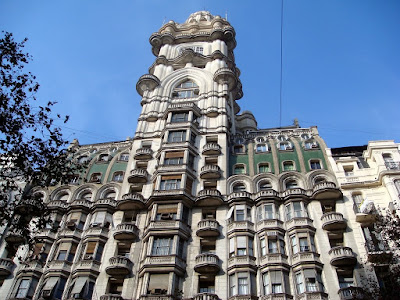 In 1918 construction began and by the time it was completed four years later, Palacio Barolo was the tallest building in South Amer­ica. It quickly became a landmark building, located in Avenida de Mayo in Monserrat, Buenos Aires, only two blocks away from Plaza del Congreso.

In the central space, the gorgeous ground floor marble lobby had nine access vaults that represented the nine steps of initiation and the nine infernal hierarchies (Hell): for Dante, this was the start­ing point for the eventual ar­rival in Paradise. And each of the six trans­verse vaults, as well as the two lateral ones, contained inscriptions in Latin.

The building’s 22 floors reflected the number of stanzas in the Divine Comedy, and like the text, the building was divided into three sections: Hell, Purgat­ory and Paradise. As people moved from the bottom to the top, they thus climbed out of Hell and on until Heaven.

The entire Palace was a commercial enterprise, so Barolo requested hidden lifts, to move from its offices to the basement. Thus he avoided con­tact with the tenants who occupied most of the floors. When the building ended in 1923, it was blessed on 7th July by the apostolic nuncio Monsignor Giovanni Beda Cardinali. 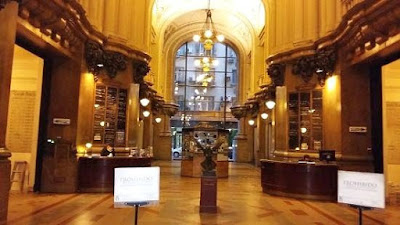 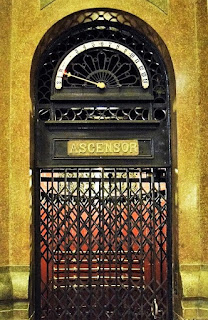 one of the original lifts

In some ways, the building was very modern; Palacio Barolo for example was the first major building in Argentina to have been made entirely from reinforced concrete. Yet the building’s ornate façade set it dramatically apart from the more austere architecture that was common then, evoking the expres­sionist architecture of Spain’s Gaudí.

A working lighthouse was placed on the build­ing’s roof, symbolising the nine angelic choirs to be found in paradise. Over the lighthouse was the Southern Cross constellation, aligned with the actual constellation on July 9th, Argentine Independence Day.

The palace may have been a symbol of the City architecturally, but it began to fill with legends about boxing, early death and stolen sculpture. In 1923, there was a historic boxing match between the Argentinian Luis Angel Firpo and the American Jack Dempsey for the World Heavyweight Title held at Madison Square Garden in New York. If the light at the top of Barolo Palace turned white, it meant that the nasty American was the winner, while a green light would represented the triumph of the godly Argentinian. Firpo took Dempsey out of the ring and the top light did turn green, but after only 19 seconds, the rival came back up and knocked Firpo out. The light quickly turned to white and millions of Argentinians felt betrayed by God, the Catholic church and the entire sporting world.

Barolo himself never lived to see the finished building that bears his name: he died suspiciously in 1922 at age 52. Was it a suicide, a poisoning or a heart attack. Perhaps Barolo committed suicide not only because the building was not finished, but because the sculp­ture that represented Dante climbing to the sky made by Palanti disappeared. After all, people asked, why did Palanti return to Italy to create the sculpture when he could have done it locally?

Later, the missing sculpture was found in the hands of a collector in Mar del Plata, who refused to sell it. Eventually the sculpture was mutilated and disappeared altogether. Was it Barolo’s relationship with The Divine Comedy and the mystery of the sculpture that caused his early death in 1922? 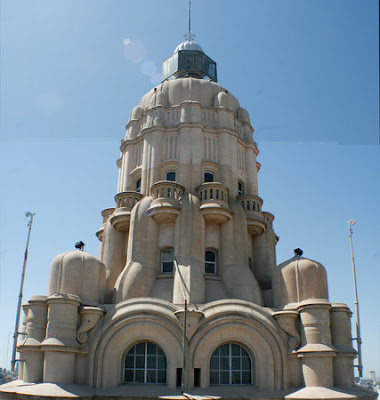 Dante’s bones remain interred in Ravenna in Italy, but the building he inspired is still impressive. Declared a national historic monument in 1997, Palacio Barolo was once South Amer­ica’s tallest building. It is not the tallest now, but the Palacio still towers above Argentina’s capital city. It is a unique example of a collab­oration between literature and architecture; medieval poetry re-created in concrete and marble.

Organised daytime tours are offered on weekdays every hour from 4-7pm in both Spanish and English. Evening tours start at 8pm, and included a visit to the lighthouse and wine. Towards the end of the tour, visitors can take photos from the dizzying heights of Par­adise. Not me! I don’t do dizzying heights!

In the Uruguayan city of Montevideo, there is a building in Plaza Independencia that is very similar to Barolo, called Palacio Salvo. Also designed by Mario Palanti, the idea was to reflect the the mouth of the Rio de la Plata as a welcome to foreign visitors arriving by boat from the Atlantic.

I can certainly see some Gaudi influences there. I like it and 100 metres tall must have been challenging.

Australia Risk Services have close to 20 years experience in designing safety management systems. We offer safety systems that identify and seek to remedy safety, environment, and health risks in the workplace.

I worked for a couple of years as a barista in Spain and Italy but have never visited South America. We Australians should broaden our thinking.

Hello Hels, That has got to be the world's tallest Mansard roof. I count at least four stories, plus the parapet.
--Jim

With expressionist architecture, we usually expect distortion, fragmentation or the sharing of exaggerated emotion. Barolo’s relationship with The Divine Comedy was so strong, his death so unexpected and the mystery of the sculpture was so bizarre, the architecture seemed driven by emotion.

Thank you. Every architect, builder and town council has had to be 100% aware of safety issues, even long before 1918. But the enormous height of the Palacio Barolo building made the safety issues even more critical.

That is so true. At uni I did art and architectural history of Italy, France, Spain, Netherlands, Britain, Germany, Turkey, Iran, India etc etc but nothing (and I do mean NOTHING) of Central and South America.

The roof line is spectacular because it represented the dizzying heights of Par­adise .... in stone. There are probably many architectural masterpieces around the world that were inspired by literature, but none as specifically as this building in Buenos Aires.

I'm trying to think of ANY other building based on a great work of literature - nothing so far. I really like a Mansard roof but can't see one here - maybe Jim (Parnassus) found another picture somewhere!
CLICK HERE for Bazza’s munificent Blog ‘To Discover Ice’

one that I thought of instantly is El Castell (1968) in Barcelona. Inspired by Franz Kafka, this block of flats is full of senseless walkways and bulging cubes, all intended to confuse.