An American poet's life in books and film - Emily Dickinson

The film A Quiet Passion depicts the poet Emily Dickinson entirely inside her home. Before seeing the film, I needed to understand Emily's inner life & family experience. Thank you Biography.

Let's start with Emily's father. Educated at Amherst and Yale, Edward Dickinson returned home, joined the family law practice and moved into the family house, The Homestead (1813). He was el­ect­ed to Massachusetts State Legislature (1837-9) and the State Senate (1842-3). Be­tween 1852-5 he served as a state represent­ative in the Congress and treasurer of Amherst College. Edward’s wife was represented as the passive wife of a domineering husb­and.

There were three Dickinson children: Austin, middle child Emily and younger sister Lavinia. All three child­ren attended the tiny primary school in Amherst and then moved on to Am­herst Academy, the school out of which Amherst College had grown. Austin was later sent to Williston Seminary.

Emily was at Amherst Academy until 1847. Her time at the Academy provided her with her first Master, the principal Leonard Humphrey. Although Dickinson quite admired him while she was a student, her response to his unexpected death in 1850 identified her grow­ing interest in passionate poetry. The other significant figure was Edward Hitchcock, president of Amherst College. a man devoted his life to main­taining the connection between the natural world and its divine Creator. He was a frequent lecturer at the Academy, and Emily often heard him speak. 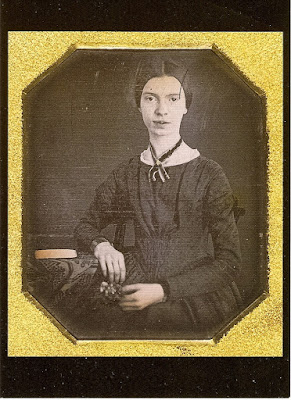 At the Academy Emily developed a group of close friends. As was common for young, mid­dle class women, the formal schooling they received in the academies provided them with some autonomy and intellectual rigour. Many of the women’s academies required full-day attend­ance, with the same curriculum as young men’s educ­at­ion.

In the 1847-8 academic year, Emily attended Mount Holy­oke Female Sem­inary in South Hadley, a school noted for its religious stance. The school also prided itself on its connection with Amherst Col­l­ege, offering students college lectures in astronomy, botany, chem­istry, geol­ogy, mathematics etc. Later the curriculum’s C19th emph­asis on science reappeared often in Emily’s poems and letters.
So why was Emily’s stay at Mount Holyoke shortened from two years to one - reclusive­ness? home­sick­ness? lack of intimates? not fully part of school activities? father forbade it? lack of faith? No-one knew.

Just then Amherst was having a religious revival. The community loved the ministers’ strong preach­ing and the Dickin­son household was affected eg Vinnie and Edward Dick­inson soon counted them­selves among the saved. Austin join­ed the church in 1856, his marriage year. Christ was calling everyone; only Emily was standing alone in rebellion.

Emily’s departure from Mount Holyoke marked the end of her form­al schooling and prompted the dissatis­faction typical of educated young women in the mid C19th. Back at home, unmarried daught­ers were expected to resume their duti­ful, selfless nature ☹

Since receiving and paying visits were ess­ential to social standing, Vinnie and Emily Dickinson got busy. In a 1855 visit, the sisters stay­ed with an old Amherst friend in Philadelphia, and attended church with her. The minister was Rev Charles Wadsworth, famous for both his preaching and pastoral care! Short­ly after a visit to Em­ily’s home in 1860, Rev Wadsworth left town, and this led to the heart­sick flow of verse from Emily. The nature of her poetic love, to Wad­sworth and others, still prompts scholars to ask: what did Dickin­son’s passionate language signify?

Emily’s ambivalence toward marriage was telling. Married women, including her mother, had failing health and unmet demands that were parts of the husband-wife relationship. Writ­ing to Susan Gilbert in the midst of Susan’s courtship with Austin Dickinson, Emily distinguished between the supposed joy of marriage and the parched life of the married woman. Emily clearly looked to her future sister-in-law as one of her most trusted readers.

With their father’s move to Washington, Austin gradually took over his father’s role. His marriage to Sus­an Gilbert in July 1856 brought a new sis­t­er into the family, one with whom Emily had much in com­m­on. Dad Edward eventually returned his family to the Homestead, Emily’s childhood home. Now she was writing hundreds of poems and letters in the rooms she had known for most of her life. Even bett­er, Austin and Susan Dickinson settled in The Homestead, the new house next door to The Evergreens.

Emily never liked to visit others and didn’t invite people to visit her because the energy that visits required was mind-numbing. Was she a real recluse, or was she sim­ply being practical? Instead letter-writing was visiting at its best!

The late 1850s saw Dickinson’s greatest poetic period. Those 1,100 poems already carried the familiar metric pattern of the hymn. Clearly her years were filled with both poems and letters. And reading. Emily read the contem­porary authors on both sides of the Atlantic: Romantic poets, Charles Darwin, Brontë sisters, the Brownings, Thomas Carlyle, Matthew Arnold and George Eliot (UK) and Longfellow, Thoreau, Nathaniel Hawthorne and Emerson (USA). 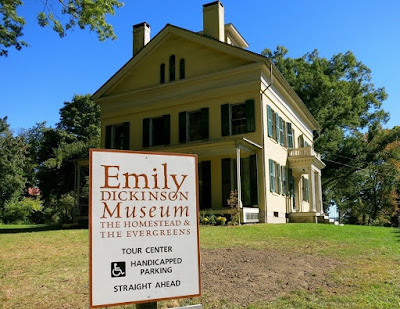 The Homestead was the birthplace and home of the poet Emily Dickinson.
The Evergreens, next door, was home to her brother Austin and sister in law Susan.

In 1862 she wrote to literary man Thomas Higginson in re­sponse to his Atlantic Monthly, and sent him four poems. Hig­g­in­son was curious, but he didn’t yet see a published poet emerging from her “poorly structured” poetry. Instead he counselled her to work harder on her poetry before she tried pub­lishing it. None­the­less Em­ily’s unpublished poems circulated widely among her family and friends, since this audience was part of women’s liter­ary culture in the mid C19th.

Emily Dickinson died in Amherst in 1886, not publicly recognised during her lifetime. Only when her family discovered vol­umes of poems and posthumously published them in 1890 did she find acclaim.

Once I had read everything that was ever written about Emily Dick­inson, it was time to see the film A Quiet Passion. Cynthia Nixon’s role as Emily Dickinson was very moving, an intelligent woman who displayed her bizarre mixture of humour, wit, free thought and a pained soul. Emily's important attachment to her close knit fam­ily was lovingly displayed in the film, even when the pain caused by her father and brother limited her life even more. Only the sister Vinnie and the female friends were constantly supportive, regardless of 1850s religious values in the USA. 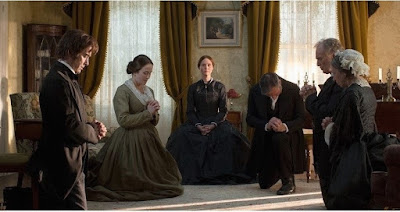 In the film, the reverend led the family in prayer. Only Emily remained seated while the rest of the Dickinson family got down on their knees.

The photography was lush, detailed and sensitively handled. The clothes were beautifully recreated, as were the architecture and decorative arts in The Homestead. And best of all, Emily’s poetry was recited through­out the film which was excellent for those in the audience who did not study Dickinson at university. But except for one editor who said women could never write well, it was not clear at all why Emily’s special talent was only recognised and published four years after her death.

The film was 2 hours and 10 minutes long. I would have eliminated the last death scene which was irrelevant to the Dickinson story and would have re­duc­ed the film by 10-14 minutes.

Hello Hels, If you are going to become a recluse, The Homestead and the accompanying Evergreens are definitely the place to do it. Seriously, I often notice the near-mania for travel in 19th century letters, at a time when travel was very uncomfortable, expensive and often dangerous to boot. Apparently Emily had the education, background and inner resources to accomplish what she felt was her goal in life.
--Jim

Well educated, naturally intelligent and supported by her family and friends, yet Emily Dickinson was one of the most despairing women I have seen. She died of kidney disease, but I would not have been surprised had she slipped into passive death. Read her poem Because I could not stop for Death; it makes death feel warm and welcoming.

The Homestead estate was large and lovely, the sort of place a parliamentarian and his family should live in. But as the decades went on, the estate seemed to act as a prison for Emily. From her own writing we know that she loved to spend time in her gardens; from the film A Quiet Passion it looked as if she shut herself in her bedroom and didn't like even to venture out into her gardens.

Emily was very clearly a person with a highly developed intellect. Nineteenth century misogyny contributed to her reclusiveness. She must have been very strong-minded to resist the religious imperative that surrounded her!
CLICK HERE for Bazza’s uncompromising Blog ‘To Discover Ice’

religion must have been such a tricky problem for Emily. Like other families in that part of New England, the Dickinsons held daily religious observances in their home and learned the Bible together. Clerics were happy to socialise and proselytise in her home.

But I think the religious revival in New England was too much. To be saved, the Church would have had to control her behaviour (no problem) AND to control her thinking as well (a huge problem). By the time Emily Dickinson was at her most intellectual and creative era, she had stopped attending services altogether. Strong-minded yes, but at a cost.

Beautifully made film with a great central performance by Cynthia Nixon. The person I felt sorry for was her sister (nicely portrayed by Jennifer Ehle). It must have been very difficult living with someone like Emily. I wonder if Vinnie sacrificed some of her own hopes and dreams in order to be with Emily? It's a pity that church and faith is always shown as being something oppressive whereas in many people's experience, it is very much the opposite. Like many people, it does not seem as though rejecting God, the church, and society generally brought Emily much peace or happiness.

good point! I too wondered if Vinnie sacrificed some of her own hopes and dreams in order to be with Emily. But now I think not.

In every close family, one daughter had to give up her dreams of husband, children and intellectual pursuits to look after the parents, as they became older and more frail. But "Maid as Muse: How Servants Changed Emily Dickinson's Life and Language" made it clear that Emily did not want to cook, clean, dust, take her parents to church or arrange dinner parties at home for family and friends.

Poor Vinnie, I suspect, was the dutiful daughter instead. Fortunately she was greatly comforted by God and the church!