The British Raj in India - in perfect control or in chaos?

The Dutch and Portuguese had dominated Euro­pean trade with the Subcont­in­ent during the 1500s. England (then Britain from 1707 on) was a late-comer to Asia. After Vasco da Gama discovered a sea-route to Asia in 1498, the Portuguese established forts and settlements around the coast of India and SE Asia. Netherlands sent dozens of ships in the 1590s, each returning with large profits. Alas the first English voyages were disasters.

So the East India Company was formed in 1600 to undo the humiliation Eng­lish merchants had felt in Asia. Queen Elizabeth I gave the Company a royal charter on England’s trade with Asia and from then on, the Company zealously pro­tected its monopoly.

My high school British History teachers stressed how pro­g­ressive Imperial Britain had been in India. Undoubtedly the Indians wanted to run their own country, uninvaded by military or corporate raiders. But the teachers could give wonderful examples about British railways systems were built, British laws legislated, economies devel­oped, irrig­ation systems installed and young Indian women protected. All in all, it was a civilising mission accomplished.

Then I read India Conquered, where the author Jon Wilson suggested that far from res­cuing India from chaos, the British caused it. Even on legal issues, the British didn’t manage to reform and univers­alise per­sonal law, leaving a confused tangle of pro­p­erty legislation that impeded modern commercial relations. With nothing to replace them, periods of food-price inflation led to the deaths of millions of Indians. 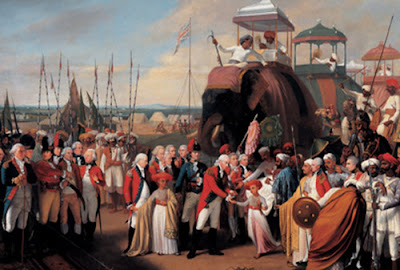 The Company was not merely a collect­ion of merchants; rather it was a mini-state with power to wage war, issue regulations and make treat­ies with foreign powers. Pow­er was centralised in London offices that issued instructions to officers overseas.

Critics argued that the Company was actually protecting its own corporate power and status, not Britain’s commer­cial relat­ion­ship. The Company’s aggressive approach created a tense relationship with Indian merchants and political leaders. Its officers hid behind the walls of forts and military garrisons whenever they could. Negotiations were short; force resolved difficult situations.

The first major clash began in 1686, when Company officials were anxious that a] the Mughal empire wasn’t letting them trade without paying taxes and b] the Mughals were collaborating with private English traders to flout the Company’s monopoly. So war was declared on the Mughal empire. A fleet of 19 ships and six army companies was sent to liberate the English. But the Company’s ships were scattered by bad navigation and they were easily defeated by the Mughal military at Bombay.

By 1710 the Mughal empire practical power had begun to fragment. But until the early-mid C18th, India’s political system was powerful enough to defend against the Company. Violent events in 1720 could have led to the British conquest of Kerala, had the East India Co. not been embroiled in bigger battles elsewhere. A fleet and a small army sailed down from Bombay to take revenge, and land was “conquered from the natives”. But the fight in Kerala was quickly abandoned. In 1721 the British ships and troops were needed to defend Bombay against the Marathas of Maharashtra state. 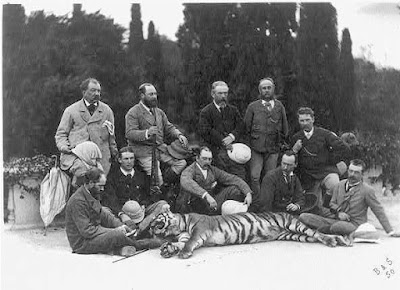 As noted by my history teachers, the standard view of Britain’s empire in India emphasised its control, stability, success and the rational pursuit of profit. After all this story had been recorded by the empire’s governors and generals, after they returned to Britain.

The reality was that British actions were messy and chaotic. The Persian ruler Nader Shah invaded India in 1739, overthrowing the Mughals and stripping their treasuries. The invasion provoked conflict in the capitals of India and sent bands of warlords to ransack the country side.

Company forces led by Robert Clive sailed from Madras to a battlefield north of the Company’s base at Calcutta, and defeated the army of Bengal’s nawab Siraj ud Daula in Oct 1756. Then the Battle of Plassey, in June 1757, was the most important event that led to the Company’s conquest of India. It pitted 3,000 soldiers of the British East India Co. against the 5,000-strong army of the young Nawab of Bengal and his allies. When the Company refused to back down, the nawab marched, driving the British from Calcutta. After Calcutta was retaken and Siraj signed a peace treaty grant­ing all they demanded, the British marched to depose the Nawab! British trade and honour were protected by violence; Robert Clive, perhaps an unstable sociopath, became known as the Conqueror of India.

The British replaced Siraj on the throne with the more compliant Mir Jafar. But always paranoid about Indian actions, trust broke down again. Allies became antagonists and the British began to assert power more widely. Mir Jafar was blamed and ousted, apparently because conqu­est didn’t lead to quick profits. But Bengal’s wealth was rapidly draining into Britain, while its prosperous weavers and artisans were coerced like slaves by their new masters. 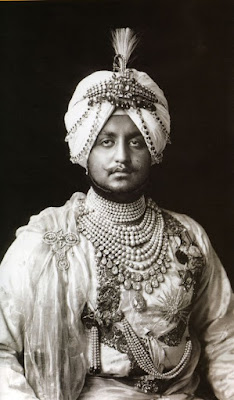 The British fought in a succession of late 18th and early C19th wars, including the Second Maratha War of 1805. Only by 1818 had Britain and the East India Co become India’s clearly dominant powers. But conquest didn’t create a stable, effective state, nor did it create peace. During the 1820s the British faced a succession of insurrections that needed many more troops to win.

In April 1857, the north Indian city where the Commissioner of Meerut was stationed became the heart of the greatest-ever insurrection against Britain anywhere in the British empire. During the Indian Rebel­lion of 1857, much of north India was ruled by leaders hostile to the Company. Atrocities happened on both sides, but the last days of the Rebellion were so brutal, Indian Delhi and Lucknow were destroyed. The British massacres of rebel sepoys and unarmed citizens were war crimes.

The days of the British Raj in India were numbered. After 1858 the Com­pany was abolished and Queen Victoria was proclaimed India’s direct sovereign. British power was exerted through law courts and public works, railway timetables and codes of law, not just military violence. Yet imperial power was still limited and messy.

The British finally left India in 1947.

Hello Hels, When one country makes a lot of money while "delivering civilization to" another country, there is no way that fair dealing is going on. You were given the sanitized British versions, while Americans learned even less about the true state of politics in India. Most of my impressions were from British books in which people made their fortunes or reputations in India (while always sparing of the gory details), or hidden behind Colonel Blimp-like characters, confused and jingoistic, but apparently harmless.
--Jim

Interesting summary - huge topic which I think you've done really well to capture. Of course, there were genuine people from Britain who did their best to serve in the manner of the time - it's too easy to judge with modern eyes. But I don't know of any empire, ever, that was altruistic (or any nation, come to that) and I totally agree that Clive was an unstable sociopath - very unpleasant piece of work!

Yes, Clive was a scoundrel - and that's being polite but he did epitomise the British attitude to India (and the rest of it's vast Empire). Young men would join the Company or the Army to "make their fortune" in India. I have always felt uneasy that this committer of atrocities has a statue at the St James Park end of King Charles Street, next to Downing Street.
Chanel Four's drama series Indian Summers nicely depicted the last decades of the Raj.
CLICK HERE for Bazza’s recondite Blog ‘To Discover Ice’

Every Monday morning we had an open air assembly at my primary school. The principal stood on a platform, leading the chanting of "I love God and my country, I honour the flag, I will serve the Queen, and cheerfully obey my parents, teachers and the law."

Everything has changed since then.

correct. I knew that the East India Company made an absolute fortune, accounting for half of the world's trade!! This was in turn great news for the wealthy merchants and landed gentry in Britain who owned the Company's shares. Josiah Child, for example, became mega-wealthy, before and especially after he became Governor of the Company in 1681.

But here is something I did not mention specifically. Indian historians believe that India was once a wealthy, healthy nation, impoverished and ruined by invading British colonialists. Yet the same historians note that the British were overwhelmed by the wealth and magnificence of the Indian potentates whose protection they sought. So India's natural wealth would have been very badly distributed, regardless of what the British did.

history is always being re-written *nod*. Either because 1] new documents are accidentally unearthed or are released from sealed archives, or because 2] attitudes change over the decades and centuries eg to slavery, women's rights, colonialisation, mental health, poverty, the power of the Church etc etc.

Of course we don't know of any empire that was altruistic towards it colonies. Think of Portuguese colonists and the brutal slave trade in Brasil. Or the brutal, violent exploitation of Africans in the Belgian Congo. Or the Chinese who so cruelly occupied Tibet to destroy Tibet's strength and traditional culture. That seems to be the nature of colonialism :(

everything has indeed changed since we were in primary school (1950s). The values imposed on Australians by the government, Church, newspapers and schools were completely different back then. So I think our history teachers were teaching the curriculum they were given and really believed in.

many thanks. I deleted the comment for now and will republish when the Silk Road topic comes up.

ABC News this week gave the following report.
Border walls could be built to funnel the flow of merchandise and people. Known as the Great Hedge of India, one such wall was built by the British as an inland customs border. At first the custom posts were randomly placed on roads where there was salt smuggling. In 1823, they placed these posts in a line and set up a barrier of thorn bush between them - a huge prickly hedge. In 1869, the British dragged 150,000 tonnes of thorn bush on to the customs line, before deciding to experiment with growing a live thorn hedge, which would need less maintenance. The lack of salt was disastrous because there was a lot of cholera.

I wrote a long comment and managed to hit the wrong key and delete it. Quick summary. Many British civil servants who served in India had honourable motives. While the British did bad things in India, they also did very bad things back home and in other countries.

When you were telling me about the Great Hedge of India during the week, I had never heard of it. So thank you so much for the reference.

By 1872, the complete Line had a staff of 14,000, all dedicated to preventing smuggling and collecting salt tax!!

I think after the East India Company ended and India came under the control of the British Government, the civil servants did indeed serve honourably. But until 1858, ordinary British men working in India HAD to serve The Company, their directors and above all, profits.

I saw the excellent film Viceroy's House this week. It dealt with 1947, not 1858, but the issues of resentment and oppression were as strong as ever.

Spouse and I travelled around north-central India ten years ago, met by a guide every morning at the hotel or railway station. It was fantastic, even if we really needed 3 months, not 3 weeks.


Thank you for sharing such great information. can you help me in finding out more detail on  best cbse schools in pune