I was born in Eastern Europe and eventually moved into a UN refugee camp for people seeking visas to safe countries. Life for me was fine once we got to Aust­ralia, but I was always aware how my parents worked long, miserable hours every week to give us children a decent life. It must have succeeded because my sister became a 4-language translator in the Health Department, my brother became a mathematician and maths teacher, and I became a doctor.

Throughout those years of struggle, my parents never forgot the people who mentored them, enrolling them for citizenship ceremonies (successfully), teaching them English (with mixed success) and help­ing them with driving lessons. Now it was possible to mentor a new generation of young people in medical practices, preferably migrants or the children of migrants. Each year my coll­eagues and I decided to take one undergraduate student into our practices; there they spend one term of hard work, professional supervision and personal support. A very minor contribution to be sure, but one that brings an emotional thank-you from parents in the same heavily accented English my parents spoke. 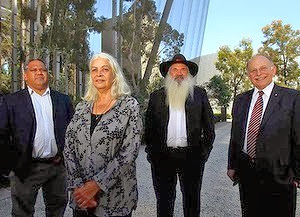 
Here is an example of a mentoring program I really admire. Noel Pearson (born 1965) was born in Cooktown and grew up at Hope Vale, a Lutheran Mission in the Cape York Peninsula. His father was from one Aboriginal people, and his mother was from another. After finishing primary school in Hope Vale, Pearson left and travelled all the way to Brisbane where he was a boarder at St Peters Lutheran College. He did two degrees at the University of Sydney – the first in history, and the second in law.

The young legal graduate had to do his articled clerkship in a reputable, large legal firm so he chose Arnold Bloch Leibler, in a totally unfamiliar city 2000 ks away - Melbourne.

Pearson wrote “During an articled clerkship at ABL’s Collins St headquarters, I came to know the story of Australia’s Jewish community and how a people endured oppression and discrimination through history; how they rose up from the ashes of the Holocaust”.

“It was Ron Castan QC who recommended me to Leibler. Ron was one of the greatest legal advocates this country has known and I got to know him following his long crusade with Eddie Mabo to establish native title in the Murray Islands. He later worked with us on the Wik peop­le’s claim to Cape York and was a paternal mentor to me.”

“My time at ABL was a crucial period: I learned so much interacting through the firm with the Jewish community of Melbourne, in the worlds of business, education, arts and culture. I learned how you can be victimised by discrimination but never succumb to victimhood. How you can never forget history but you must engage the future.”

“I came to understand Castan and Leibler’s mentorship in their community is a virtuous cycle through the generations. So I was inspired to start sponsoring young girls from Cape York Peninsula, enabling them to attend private boarding schools in Brisbane. The first one went on to become the first university graduate from her community. Others started their own programs”. [All the quotes come from The Australian Newspaper, 21/12/2013].

As everyone in Australia now knows, Pearson went on to become famous as an advocate for Indigenous peoples' rights to land. In 1990 Pearson co-founded and directed the Cape York Land Council. Pearson's first official appointment was to a Queensland government taskforce which was formed to develop land rights legis­lation. He was also a legal advisor for the Aboriginal and Torres Strait Islander Commission. In 1993 Pearson acted as representative to the traditional owners in the first land claim (successful) to the Flinders Island and Cape Mel­ville National Parks. Following the Mabo decision of the High Court of Australia, Pearson played a key part in negotiations over the Native Title Act 1993 as a member of the Indigenous negotiating team.

In Dec 2010, the Australian Government announced the membership of the Expert Panel on Constitutional Recognition of Aboriginal and Torres Strait Islander Peoples. The Panel included Indigenous and community leaders, constitutional experts and parliamentary members. It was co-chaired by Professor Patrick Dodson and Mr Mark Leibler AC. Noel Pearson and Professor Marcia Langton were vital members of the Expert Panel. 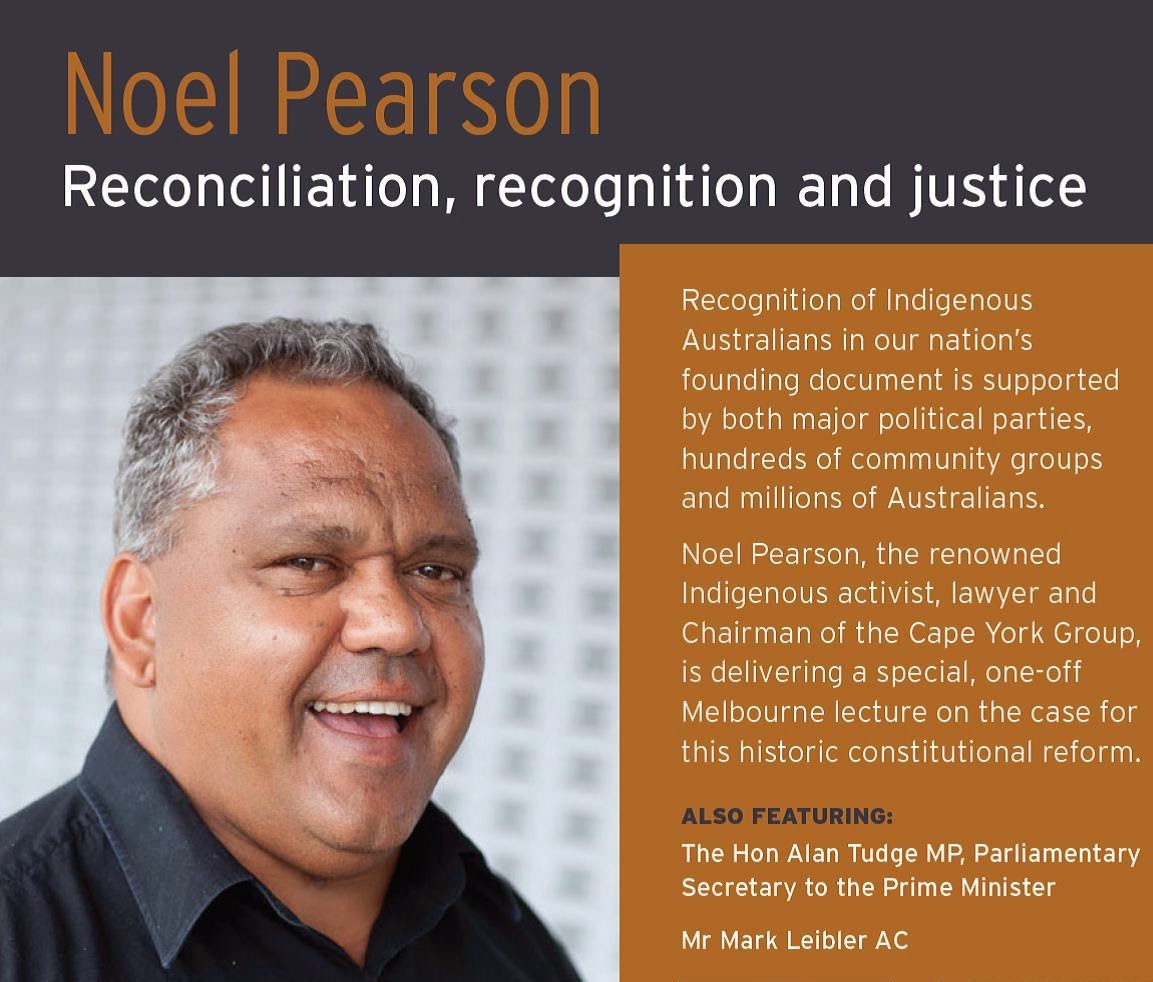 And mentoring is passed on to the next generation. Jawun is a not-for-profit organisation pioneered by Noel Pearson to help indigenous people regenerate their local communities through corporate partnerships. Bank staff, for example, are taken to visit parts of Australia to engage in a culture most Australians would rarely engage in. Using mining royalties, the bankers sit down with elders and local land councils, to help with legal obligations, rights, income distribution, school reforms and information technology.

I (Helen) would like to add two thoughts. Readers might like to find Noel Pearson's Quarterly Essay 55 A Rightful Place: Race, recognition and a more complete commonwealth, published in Sept 2014. Pearson shows how the idea of race was embedded in the constitution, and the distorting effect this has had. Now there is a chance to change it. Pearson shows what constitutional recognition means, and how true equality and a renewed appreciation of an ancient culture would be possible. This is a wide-ranging, eloquent call for justice.

I love hear about people. With people like this the glass is more then half full.
Coffee is on

Eddie Mabo and Terra Nullius.. I remember him. Another very brave man.

I listen to the news for an hour on radio every morning and another hour every night, and always end up depressed. Massacres, corruption, unstoppable diseases, unemployment, sunamis, exploitation of women and girls, cocaine etc :(

Then you occasionally hear of people going out of their way to improve community life - teaching, mentoring, working on the Mercy Hospital Ships, empowering the underprivileged. It makes life worthwhile.

Starting in 1971, Justice Blackburn ruled that Australia was terra nullius prior European settlement. His judgement was unsuccessfully challenged in 1977 and 1979. But in 1982, Eddie Mabo and his colleagues began their legal claim for ownership of their traditional lands in the Torres Strait. Mabo's landmark legal case finally acknowledged the history of Indigenous dispossession in Australia and abolished the legal fiction of terra nullius.

This brave man's battle was finally successful in 1992, but Mabo had already died.

Hello Hels, We hear so much about multi-culturalism and so forth, but impressive examples are rare, so I greatly admire both the experiences of the writer of this post, and also the activities of Noel Pearson.
--Jim

oppression of minority communities works against both migrants/refugees from other countries AND against indigenous populations. But it is particularly shameful that Pearson still has to show this nation what constitutional recognition means.

Joe is my partner at home and in blogging. Normally he only does the reading of academic journals, TED Talks and Weekend Reviews in The Australian, then sends me the selection of great topics. I am left only with the research and the writing of the posts.

I think this post must have particularly resonated with the beloved.