Ludwig Guttmann (1899-1980) was born in Upper Silesia Germany/now Poland, into a religious Jewish family. His parents were Bernhard and Dorothea, and his sisters were Margarethe Guttmann, Alice Bamberger and Liesel Karger. He started studying medicine at the University of Breslau in 1918 and continued his studies in Würzberg and Freiburg, graduating in 1924.

Guttmann returned to Breslau and worked with Europe’s leading neur­ologist Prof Otfrid Foerster from 1924-8. In 1928, he was in­vited to start a neuro-surgical unit in Hamburg but this post only last­ed a year as Foerster asked him to return to Breslau as his assistant. Guttmann remained in this job until 1933 when the Nazis forced all Jewish staff and patients to leave Aryan hos­p­it­als. Fortunately Guttmann became a neurologist in Breslau's Jewish Hos­p­ital for 6 years.

On Kristallnacht (9th November 1938), Guttmann gave orders that any male person entering the hospital was to be treated, despite the racial laws specifying that Jewish doctors could only treat Jewish patients.  The next morning, he had to justify to the Gestapo the large number of admissions. In fact he saved 60 Jews from certain death by telling German officers they were too sick to be transported.

Like all Jews, Gutt­mann's passport had been confiscated and he was not allowed to travel, yet in Dec 1938 he was ordered by von Ribbentrop to travel to Lisbon! Perhaps it was to treat Portugal’s prime minister, Antonio Salazar.

There must be a God in heaven; Guttmann was already in contact with the British Society for the Protection of Science and Learning, and was suddenly offered a position in Britain, plus visas. Ludwig left Germany in March 1939 with his wife Else and children, and went to live in Oxford. [His parents and relatives all died in Germany in 1943, except for Curt and Alice Bamberger who survived by escaping to the USA]. 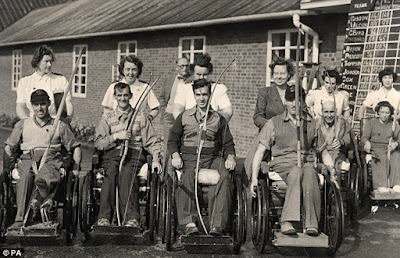 In 1939 Gut­tmann worked at the Radcliffe Infirmary and at St Hugh’s Coll­ege Military Hospital for Head Injuries. But as WW2 con­tinued, the British Government became acutely aware of the influx of paralysed servicemen. So in Sept 1943, they asked Guttmann to become Direc­t­or of the new National Spinal Injury Centre at the Emergency Medical Ser­­vices Hospital, Stoke Mandeville in Aylesbury.

When the centre opened in Feb 1944, Guttman did not like what had been the typical care for spinal patients in Britain – flat on their backs, full body plaster casts and pain relief. As director of the UK's first specialist unit for treating spinal in­jur­ies, Guttmann believed that physical activity was the major meth­od of therapy for injured servicemen and car accidents, helping them build up both strength and self-confidence. Thus he was the neurologist who revolut­ion­ised the treat­ment­ for, and lives of those with spinal injuries.

Of course Guttman was seen as a bit of a radical neurologist, and his many conflicts with colleagues and the hospital adminis­t­ration were loud. But he was an attractive doctor, and compassionate. And his relation­ships with his patients were heartfelt. He challenged the old-fashioned staff and insisted his patients participate in their own recovery. Central to His Big Plan, Guttmann introduced the idea of physio­therapy as a medical treat­ment. Physiotherapy was the way to build strength and to fight depression. He hired an army physical trainer to lift weights with patients and practise movements.

Within months, his Spinal Unit became a place of optimistic noise and activity. In a few years he had transformed the treatment of spinal patients, first in Stoke Mand­eville then across Britain. The knowledge, gained in treating and preventing complications to young soldiers and traffic accident victims, forced Stoke Mandeville’s Spinal Unit to expand rapidly. Only one productive thing had come out of WW2 - Guttmann and his staff gave paralysed patients the skills and treatments to face a useful future and to be reintegrated back into normal society.

Sport
To coincide with the opening of the 1948 London Olympics, Dr Ludwig Guttmann held the first Stoke Mandeville Games on the lawns of the hospital. He presided over a wheel chair archery com­petition where the comp­et­itors, 16 ex-servicemen, were young people with severe spinal injuries.

The games were held again at the same location in 1952 where dis­abled Dutch WW2 ex-servicemen took part along side the British in archery, table tennis, darts and snooker. The games were the first step in Ludwig Guttman’s dream. At first he used the term Paraplegic Games, in order to encourage his patients to take part. Later they were called Paralympic Games. 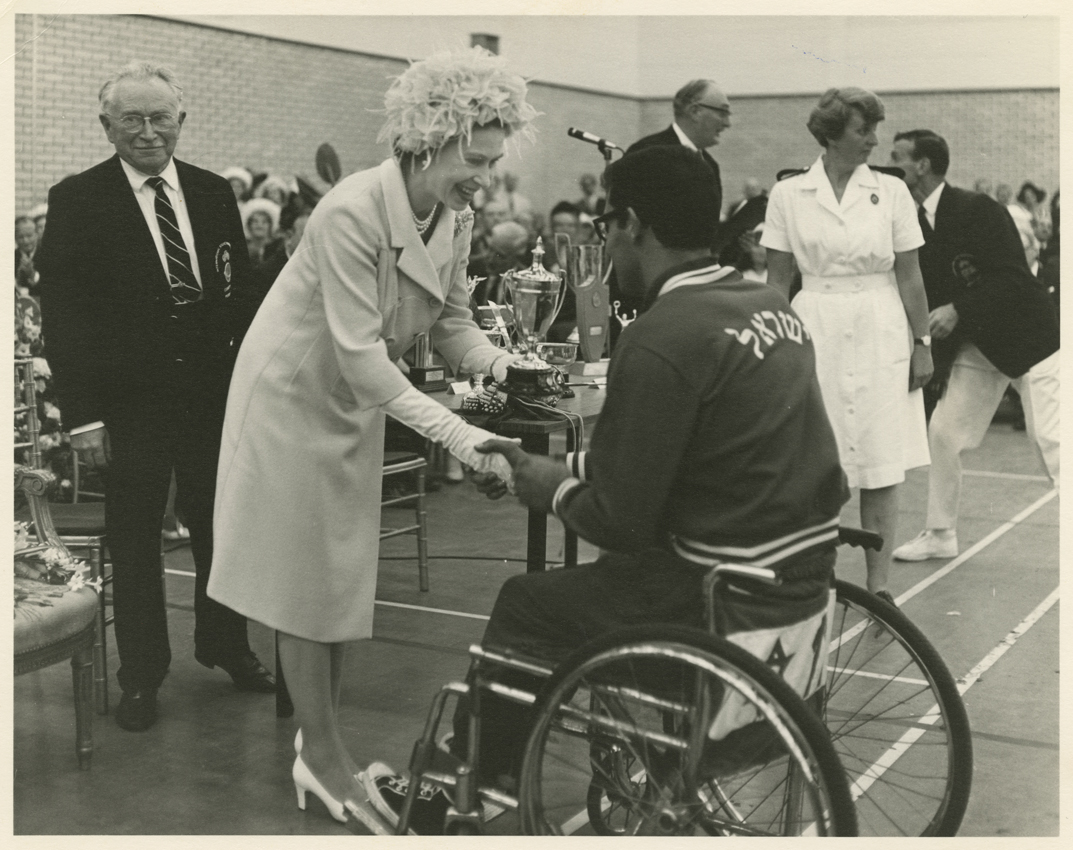 The queen and Dr Guttmann presenting a medal to an Israeli champion
Stoke Mandeville Sports Stadium, 1969

By 1960, 400 athletes from many countries* participated in the first Olympic Games For the Disabled which were held in Rome, alongside the Rome Olympics. In Toronto in 1976, two other disability groups (blind and amputee athletes) were added and a truly international sports competition took place. In the same year, the first Paralympic Winter Games took place in Sweden.

After retirement, Guttmann wrote Textbook of Sport for the Disabled (published in 1976, Aylesbury).

No wonder all the older British neurologists thought Dr Guttmann was a bit radical. Nobody likes to see their traditional and well established treatments overturned.

Hindsight would tell us that when things starting heating up in Europe (such as when Jewish doctors were only allowed to treat Jewish patients--at that point I don't think that anyone could still think that things would be "all right"), it was a good time to spend all your energies to get out. Yet some people such as Dr. Guttmann felt such a strong sense to duty that they helped others while putting themselves at greater risk.
--Jim

I had heard of this mans work at Stoke Mandeville. I think it was a TV documentary long ago. Sadly Stoke Mandeville was one of the many location that became associated with the child abuser Jimmy Saville. One of the drawbacks of being an island with a very insular mentality in those days was the slowness to take up new ideas. Medicine was one area, culinary practice was certainly another!
CLICK HERE for Bazza’s criticasterous Blog ‘To Discover Ice’

Britain had the best medical staff in the universe and here was some younger man, with a foreign accent, suggesting that there may be other ways to help severely damaged British ex-servicemen. I imagine that when Dr Guttmann hired an army physical trainer to lift weights with patients and practise movements, the older consultants and matrons would have been ropable.

I come back to the same two questions every time: a] why did Germany ban, exile or exterminate their OWN very best and brightest scientists, doctors, musicians, architects etc etc? and b] why did people on notice (particularly Jews) not get out in 1939 and 1940, when the Germans were still giving exit visas?

Perhaps those particular citizens were so clever in their careers and so important to Germany, they were confident they would never be killed :( Wrong!

I knew about Dr Guttmann and Stoke Mandeville from my late brother in law, himself a German doctor who got out in time and worked safely in Australia. He thought Dr Guttmann was a wonderful role model. And I knew about the Paralympics as well.

But until relatively recently I had no idea that the hospital-visiting paedophile, Saville, had a private room in Stoke Mandeville to take his 63 victims to.

What a wholesome man! Too many individuals look at those with disabilities with disdain, yet here's a man who inspires hope. Just look at how he accomodated those individuals and enabled them to continue with sports.

agreed totally. My spouse/blog partner believes I usually underestimate the importance of medicos to human happiness. Once I read Ludwig Guttmann's story, I thought he might be onto something special here :)