1984
Melbourne girl Kylie Maybury (born 1978) was abducted and murdered, during the Melbourne Cup Day holiday on 6th Nov 1984.  Kylie was with her mother, Julie, visiting a neighbour when she was sent to a nearby shop to buy sugar. She was walking home along Plenty Rd Preston when she was taken. At 12.45am the next day her body was found in a gutter, not far from the flats where Kylie lived with her mother. The six year old had been raped and possibly strangled.


Police released a composite image of Kylie Maybury as she may have looked on the day she died. And police released an image of the Mayburys' neighbour, Lorna Simpson, in the hope that it would jog a key witness's memory. This potent­ially crucial witness approached Simpson while she was searching for the girl on the corner of Gregory Grove and Plenty Road at the time she was taken. The witness, a slim young Italian girl, told Ms Simp­son she saw a child fitting Kylie's description in a white stat­ion wagon. A man was driving the car, which turned left onto Murray Rd. The girl then crossed Plenty Road and walked towards a pizza shop. That girl would be a woman aged about 50 now. 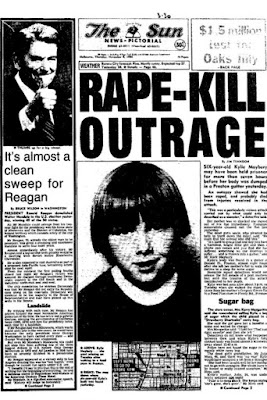 The story was much bigger than the victory of Ronald Reagan in the USA.
The Melbourne Sun newspaper, 7/11/1984

Two more anonymous callers contacted the police. The first witness called police in Nov 1984, and told them a Holden Kingswood station wagon was in­volved. The second caller phoned Crime Stoppers in May 1997 and gave the name of a potential suspect. Investigators have also released an image of a similar vehicle described by witnesses.

The crime was so horrible that police always worked on the basis that there were few suspects capable of such a thing. So dozens of dedicated police investigated the case for a very long time. It was taking so long that some of the detectives who had originally invest­igated the murder had since died. But the beauty of cold forensic science is it can be used to catch killers from years back, and it can be used to clear those wrongly accused.

As would be expected, the victim's clothing showed obvious signs of the nature of the attack, but it was in pre-DNA days and any forensic examinations took the police no closer to the killer. Two relatives of Kylie, her grandfather (in Oct 1985) and her paternal uncle (in his cell at Pentridge Prison in Feb 1987), committed suicide in separate incidents after the murder. Homicide investigations had already totally cleared these two men of any involvement in Kylie’s death. 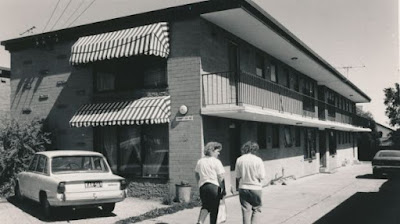 The block of flats in Preston where Kylie lived with her mother
Photo credit: The Age 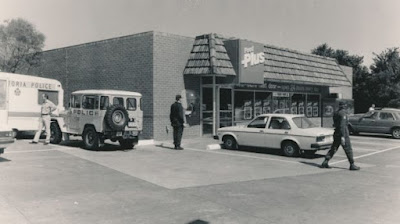 The local shop where Kylie bought a packet of sugar
Photo credit: The Age 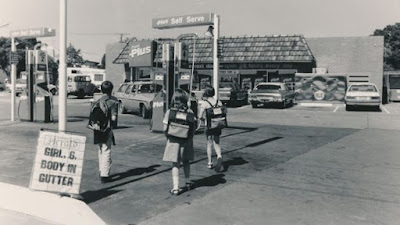 School children walking past Herald Newspaper headlines,
warning of a 6 year old body in the gutter.
Photo credit: The Age

Before Australia had a Cold Case Squad, Canada had already developed a new police science and offered to help detectives on the Maybury case (3AW 28/12/2016). Canadian police forces had already begun using DNA tests in the early 1990s, but only rarely; the proced­ure was pricy, time-consuming and used up the entire biological sample. In the mid-90s, a new polymerase chain reaction technology allowed tests to be conducted on much smaller samples. And it seems the Canadians taught us the Automated Finger Print Identification System. It compared finger and palm prints from people who were charged with crimes with those found at crime scenes.

These new developments in DNA and fingerprint technology allowed cold case investigators to revisit old cases and come to scient­if­ically reliable conclusions. As we will see.

1995
Seven years after the Maybury murder, there was a remarkably similar crime against another six-year-old Melbourne girl, Sheree Beasley, who was abducted in June 1991 near her Rosebud home. Her body was found in a drain on Sep 1991 in Red Hill. Former church elder Robert Arthur Selby Lowe was convicted of the Beasley murder and sentenced to life in prison.

But by 1995 the similarities between the two old murders grabbed detect­ives’ attention. Both 6 year old girls had been abducted while returning from errands at local shops. Both died from asphyxiation. One victim was dumped in a gutter and one in a drain. Kylie was abducted on a public holiday and Sheree on a Saturday when Lowe was not working. In addition, Lowe was found to have a history of sexual offences in New Zealand.

A re-examination of the Maybury case now made Lowe the main suspect for the 1984 murder as well! Police found Lowe was offending against 3 young girls in the Preston area, around the time Kylie was killed, less than 1k from where Kylie's body was found! Lowe's psychotherapist said Lowe was fascinated with little girls wearing pink. Sheree Beas­ley was dressed in pink and Kylie Maybury carried a pink bag. It was a compelling circumstantial case and, with similar factual evidence, some police believed they had their man.

2016
Witnesses came forward with new information about Kylie and a middle aged man in his early 1970s Holden. Now a 73-year-old man, Gregory Keith Davies, was charged in June 2016 over the 1984 murder of six-year-old Kylie Maybury in Preston. The accused had been taken to the Spencer St police complex in the CBD, where he was interviewed by detectives.

Homicide squad detectives alleged the then-42-year-old Mr Davies ab­ducted and raped Kylie on the night of 6th Nov and murdered her on 7th Nov when her body was discovered. Detectives did not confirm whether police still had a DNA sample taken from Kylie's body back in 1984 - clearly charges would not have been laid, had the DNA evidence eliminated Davies. But they did say that in 1894 Davies lived in his parents’ Preston home, only 500m from where Kylie’s body was found.

Davies was first arrested at his country home near Kilmore. Then he was ch­arged and remanded in cust­ody to appear at the Melb­ourne Magis­t­rates' Court. He faced a brief out-of-sessions court over the abduct­ion, rape and murder of six-year-old Kylie Maybury. Davies was further remanded to face a committal hearing next in May 2017.

Gregory Davies was brought to court  this week (May 2017) over the 1984 rape and murder of six-year-old Kylie Maybury. 33 years after the unsolved murder, Davies immediately pleased guilty and was remanded in custody to appear before the Supreme Court for sentencing.

These awful cases never fail to sicken me. DNA forensics have led to more and more criminals being caught after tens of years. I doubt, however, it that's any kind of deterrent. It's impossible to know how this person could have slept at night through all of those years. To me, the instant admission possibly points to a knowledge that one day there would be a knock at the door.....
CLICK HERE for Bazza’s contumacious Blog ‘To Discover Ice’

Imagine being the mother of a young dead child, waiting for 33 years before she knew some peace. RIP Kylie

I too am very very glad Gregory Davies admitted to the rape and murder before the court case even started. At least the mother was spared another hideous, drawn out trial.

Re DNA. Shortly before Kylie Maybury was murdered, police interviewed Robert Lowe over sexual suggestions made to three young girls in Preston, near where Kylie was later taken. A neighbour took his car rego number! Robert Lowe was rightfully convicted of Sheree Beasley's murder and sentenced to life in prison.

I used to cry if my sons broke a bone playing football :( So we all understand in a city like Melbourne, where front doors were left unlocked till bed time and parents let children play cricket on the streets, Kylie's murder terrified the whole city.

I saw Kylie's mother coming out of court this week. Clearly no mother can survive the brutal death of a young, lovely child with her sanity intact.

Hello Hels, It seems that every place has their share of these unthinkable tragedies. I do, however, question the decision to allow six-year old girls to run errands alone, even in 1984 (although don't ask me what is the allowable age).
--Jim

Tragic! Even if parents had never heard of paedophiles or child kidnapping, they certainly knew that 6 year olds were WAY too young to cross a road by themselves. I wonder if the two suicides occurred, partially, because the men in the family felt they failed to supervise the little girl adequately.

Omg, your comments are disturbing to say the least! We all make mistakes and this day was the biggest mistake Julie would ever make!
Once I read some of these comments I thought how shallow people really are. I know Julie and I knew Kylie! If I stumbled upon this page so easy, I pray Julie doesn't! Just try if you can, put yourself in her position , you can't can you? Imagine it's your child and then 32 years later a face appears and it is a piece of filth named Gregory Davies known to police beforehand for attacking a young girl with repeated blows to her head with a hammer on a train. But I suppose she shouldn't have been on the train! Everybody that knows Julie can see the toll it has taken on her. She and she alone will live with the fact that if only she had said no you can't go to the shop that Kylie would be alive today.

My parents always sent me to the local shops after WW2 ... I imagine all Australian families did. I know we never locked the back door and only locked the front door when everyone went to sleep.

But can you remember if families took stock in 1984 and became more cautious?

The mum of 1984 murder victim Kylie Maybury has spoken out on her heartbreaking search for her daughter's killer, who was found 30 years later living just around the corner. Her mother Julie told A Current Affair she had spent three decades travelling around Australia, searching for her killer. Years passed, but Ms Maybury refused to give up hope. She made it her life's mission to catch Kylie's killer.

Davies originally said he was innocent, but he admitted the truth on the first day of a commital hearing. Davies will return to court on November 27th 2017

Thank you. If Gregory Davies already gave the court his guilty plea in May, why does there need to be another court case in November 2017? The family must be exhausted after 33 years.

What Presbyterian Church did Robert Arthur Shelby Lowe attend and serve as an Elder in Melbourne?

all the contemporary newspaper articles did not specify which exact church Lowe prayed at. They were merely making the point that Lowe seemed like an upstanding community member, a Sunday school teacher and a sports coach. In reality, they said, he was a sexual pervert who loved the concepts of raping and murdering small girls.

Thank you Hels.
I'm going to contact a few people from Melbourne to see if I can get a hold on his church and where it was.
The actual court case may have it mentioned.