Corfu - was it Venetian, British, Greek or something else?

The Ionian island of Corfu, off the west coast of Greece, is 56 ks long but only 18 ks wide.

Now some quick and messy history. Before the French Revolutionary Wars, the Ionian Islands had been part of the Republic of Venice. Then the 1797 treaty dissolved the Republic of Ven­ice, and Corfu was ann­ex­ed to the French Republic as the French depart­ments of Greece. In 1798-9, the French were driven out by a joint Russo-Ottoman force. The occupying forces founded an island republic which enjoyed relative independence under Ottoman and Russian control from 1800-7; Greek was to be the primary local language.

The Ionian Islands were briefly re-occupied by the French, but very soon after, in 1809-10, the UK defeated the French fleet and capt­ured some Greek Islands. After Napoleon, many countries were inter­ested in the control of the prize island, Corfu island. Thanks to the aid of a Greek General, a treaty was signed in Paris in 1815 that recog­nis­­ed autonomous Ionian islands under exclusive British control. 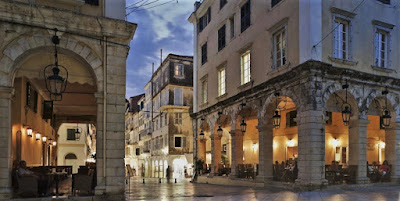 A formal federation, the United States of the 7 Ionian Islands, was created in Aug 1817 via a Parliament with a 2-house legislature. The gov­ernment was organised under the direction of a Lord High Com­m­is­sion­er, appointed by the British monarch on the advice of the Brit­ish government. Then the Supreme Council of Justice was established.

The first (1815-23) British high commissioner (and Governor of Malta) was Sir Thomas Mait­land, a rather repressive dictator who quickly stir­ring strong complaints from the locals. Yet the British era (815-64) was probably the most flourishing period in the history of Corfu. Corfu established the first Greek University, the Ionian Academy, which was established by Frederick North, 5th Earl Guil­ford in 1824. Its 3 faculties included Med­icine. The estab­lish­ment of schools, which had been neglected by the Venetians, was imp­roved and by 1850 there were 200 schools. Corfu gain­ed its first Philharmonic Orchestra and the first School of Fine Arts.

Despite these benefits, the islanders came to resent British rule. And it all came to an end when a 1863 treaty demanded Britain renounce the Ionian islands. In March 1864, representatives of the UK, Greece, France and Russia pledged the transfer of sovereignty to Greece, under the newly install­ed King George I of the Hellenes. And in May 1864, by proclamation of the Lord High Commissioner, the Ionian Islands were united with Greece. The city of Corfu lost power in favour of Athens, but the rest of the island began to pros­per both polit­ically and economically. 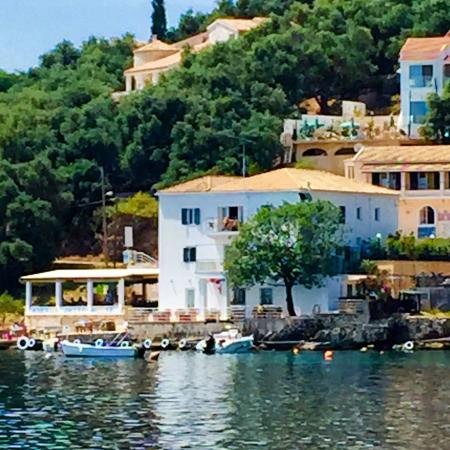 Even then, British influence continued. Way back in 1823, a cricket match was held in Corfu between Royal Navy officers and men in the British Garrison. Thus began a lasting union of this most British of games and the Greek island of Corfu. Of the many cricket clubs drawing excited crowds on the island these days, the loveliest field is Spianada square in town, a UNESCO World Heritage Site with a view of the Old Fortress. Also organised by local British-ex pats, Corfu was where the first tennis clubs opened in Greece.

But the biggest attraction for British tourists now seems to be the tv series The Durrells (2016). Based on The Corfu Trilogy by Gerald Durrell and set in 1935, the Durrell family left home in Britain and settled near Corfu Town. So modern tourists want to rent a villa in the pretty NE corner, where The Durrells was filmed, or stay in the flats at the White House in nearby Kalami, where Law­ren­ce wrote. The lovely bay of San Stefano has the tortoises that fascinated young Gerald, especially in late June. Plus pods of dolphins and sea-turtles.

The quotation inscribed at the foot of a statue of author and naturalist Gerald Durrell in these beautiful gardens was dedicated to him and his brother Lawrence. The brothers’ writing, especially ‘My Family and Other Animals’, popularised this green isle in the world’s imagination.

Corfu Town is a unique blend of histories, with a nod to all the nations that controlled it during its mixed history. On arrival in Mandracchio harbour, the Old Fort can be seen from the water. Fit visitors climb to the top of the fort and can enjoy the magnificent view over the town. Then the fit and the unfit can visit the black­ened remains of St Spyridon, Corfu’s patron saint, in his church. The public buildings of the Venetian rule blend well with narrow winding streets, lovely little bars and shops, and small secluded squares.

Cultural sites are everywhere. Once home to Greece’s King George I, the elegant Saint Michael and George Palace sits on top of a hill outside Corfu Town. The Pal­ace, also the birthplace of Britain’s Prince Philip, opens its elegant interiors to the public and hosts a museum dis­pl­aying artworks, statues, historical and arch­aeological treasures.

The British Cemetery is near San Rocco square. Founded in 1814 by the British Protectorate it was used as a garden cemetery where the British officials, soldiers and residents were interred. After the departure of the British, the cemetery served as the graveyard for the foreign families who stayed on (and it is still being used as a cemetery for the Anglican residents of Corfu today). Note the monument to the seamen of the two Royal Navy destroyers mined by the Albanians in The Corfu Channel Incident of 1946. 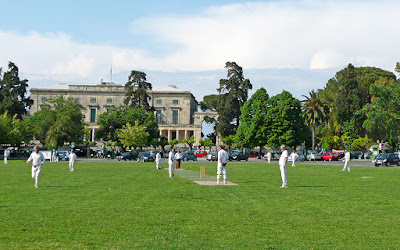 100 cricket matches are played each year,
against local Corfu teams and against touring sides

Visit Greece proudly notes that Corfu became part of the European world rather than part of the Levant.

Hello Hels, Corfu seems to be a place that has been bounced around a bit, but has taken some benefit from each occupation. It's odd to think of all the island paradises that used to exist where people could live on practically nothing and get away from it all.
--Jim

Corfu is one of the few islands in the Med that I could not have pointed to on a map. Also it's identity has always been fuzzy with no clear idea of it's heritage. I was never sure of what language they spoke and always would have needed to eliminate it when trying to recall the "Three islands of Napoleon"!
This resonates with me because where I live has an Essex postal address but is, politically, within Greater London. Do I live in Ilford, Essex or the London Borough of Redbridge; in London or in Essex? So I can imagine that the residents of Corfu might have their own identity crisis.
CLICK HERE for Bazza’s inaniloquent Blog ‘To Discover Ice’

I have holidayed in Corfu and had a great stay. It is different from the Greek islands on the east coast!

We were in the Ionian Sea barely a week ago, but not to Corfu. I am surprised to learn that cricket is played there. It looks like a very attractive destination.

I agree with the idea of an island paradise where people could live in relatively cheap bliss. But every example that we can think of has been fought over for centuries - Cyprus, Malta, Corsica, Sardinia, Cuba, Jamaica, Gibraltar (almost an island) etc etc

Over the last 150+ years, residents have felt exactly the same sensation in Alsace Lorraine. Which national government rules the area, which language do people speak, which national history do the students learn, where do their taxes go?

If I lived in Scandinavia, northern Germany, Great Britain or any place place that saw snow, I would fly asap every winter to a resort in, or on the coast of the Mediterranean. By the way, Malta and Sicily were my personal favourites.

I holidayed in Corfu 20 years ago. What struck me at the time was the way that apart from Corfu Town itself which is a lovely place with Greek atmosphere - the rest of the island (like many other places in the Med) has been ruined by Mainly British tourism. All the towns seemed to be full of young shirtless British yobs riding around on mopeds. The seafront in most of these resorts are dominated by cheap chips with everything restaurants, Bars offering British TV etc. A sad state of affairs.

In one sense I agree with your perspective, especially during the cold winter months in the north. I spent a week in Malta one year and did not hear a single word of Maltese. Even the waiters had to learn enough Swedish and German to keep up with the tourists.

But in another sense, the Mediterranean islands work very hard to run their economies based on tourism (plus agriculture and shipping). One third of _global_ tourism takes place on these islands! So if it takes hoonish mopeds and fish and chip shops, that is what Corfu businesses will offer.