In The Voice of  the Vanquish­ed, Alicia Alted reported that c465,000 Republican Spaniards fled to France during the years of the Spanish Civil War, especially during the winter of 1936.

In Jan 1939, Franco's forces finally broke the Republicans’ resistance in Barcelona & the city fell. Surviving Republicans fled north across the Pyrenees; they thought that France, a fellow Republic, would receive them as heroes, or at least welcome them as idealists with shared beliefs.

Wrong! Even after the Spanish Civil War ended in April 1939, France was still not prepared to accept the Republican refugees; they wanted to force them either to return to Spain, or to emigrate on to Mexico, Chile or Dominican Republic. Only 140,000-180,000 Spaniards remained, in hideous French prison camps.

And not just on the French mainland. A fleet of small boats left for Algeria from the port of Alicante in March 1939, in the final days of the Civil War, with c3000 Spaniards on board. When the ships arrived in the Algerian port of Oran, the French authorities there initially refused to allow passengers to disembark. Many drowned and the survivors were eventually transferred to internment camps.

Why was southern France, Britain’s greatest ally, seen to be pro-German? After he retired from the army, Marshall Petain became the first French ambassador to Franco’s Spain in March 1939. Then he was re-called back to France and appointed Prime Minister in June 1940 – just as France appeared to face military collapse against Nazi Germany.

After France's trusted Maginot Line failed to hold back the Nazi onslaught, the German Blitzkrieg poured in. France surrendered to the Germans in mid 1940, and Paris was abandoned. French parliamentarians joined the mass escape to the south, ending up in the city of Vichy. France was split into two parts: a] Occupied France under direct German control and b] Vichy France, a pro-German independent territory with the elderly Marshall Petain at its head. 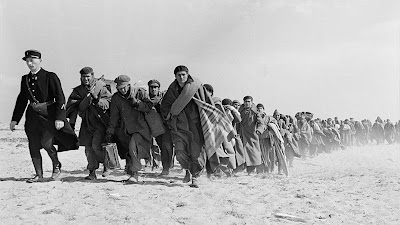 
That same June 1940, Pétain concluded an armistice with the Germans. This was not a good time to be a left wing refugee in Vichy France.

The UK did not want to accept dirty, sick or radical Spanish war refugees, but Mexico did. Mexico was then ruled by President Lázaro Cárdenas who had a progressive agenda of agrarian reform, control of the army and universal health care. 24,000 Spanish refugees, includ­ing many children, settled in Mexico between from the Civil War until December 1942, when Germ­any directly occupied Vichy France. Most remained in Mexico. Other Spanish war refugees ended up in Argentina, Chile, Cuba and Dominican Republic.

As many as 100,000 of the Spanish refugees were herded down into the French internment camp of Argelès-Sur-Mer. They were treated like animals, not given any food or shelter, and 10,000 of them died in French camps. The bloated dead bodies lay where they fell.

Young and fit Spanish men remaining in the French camps were required to work for the French military author­ities. Perhaps they were the lucky ones, assigned to help strengthen the Maginot Line in NE France. 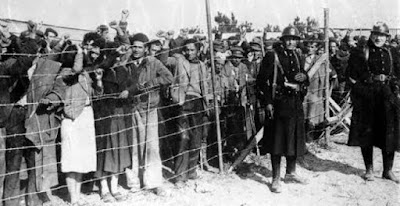 Most of the Spaniards in the Camp at Argelès-Sur-Mer were Republicans refugees who fled Catalunya and General Franco’s troops. Photos cannot tell about hunger and disease, but they can reflect distress.

When the Allied armies landed in France in 1944, they helped liberate many towns in southern France. The Spanish refugees were convin­ced that, after defeating Hitler and Mussolini, the Allies would turn on the dreaded Franco. So several thousand crossed back into the remote north of Spain to establish a bridgehead and wait for Allied reinforcements. None came; their return home to Spain had lasted less than a fortnight. Worse, the ret­urning Republicans were greeted with suspicion by their exhausted fellow countrymen. 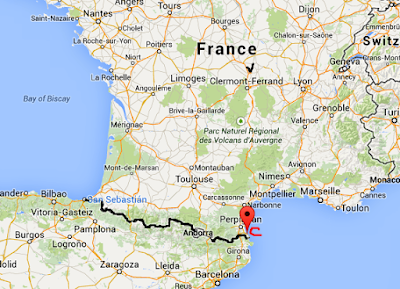 Camp de Rivesaltes, near Perpignan, was just 30km north of the Spanish-French border. The camp was built as an internment centre for 21,000 Spanish Republican men, women and children. Alas half of the prisoners were sent on to concentration camps, usually Mauthausen.

Later, during WW2, Camp de Rivesaltes was also used to hold Jews and gypsies. The camp's dark history continued in the 1950s-60s when it was used to detain harkis, Algerian soldiers serving in the French army during the Algerian war.

Decades later, there were many attempts to destroy evidence relating to the camp; in 1998 thousands of files relating to Rivesaltes were dis­covered in a skip. When local authorities and the French govern­ment announced that they would bulldoze the internment camp, rel­atives of former inmates were devastated. A memorial museum opened at Camp de Rivesaltes in 2007. The memorial is a windowless cement building buried underground, a poignant symbol of forced imprisonment. Inside the families of the survivors can see the photo­graphs, videos and maps, and sit in the auditorium for discussions.

Plus there is another memorial. The relatives of Spanish Republicans who survived the internment camp of Argelès-Sur-Mer participate in a ceremony that takes place every year in late Feb.

The defeat of Fascism in 1945 allowed millions of displaced people to make their way home. Yet in 1945, hundreds of thousands of Spaniards remained in France, gradually adapting to life there. And they kept their heads down, afraid of being treated as outcasts. Unfortunately for them, Franco stayed in power until 1975!!


I imagine that the French are not proud of their role back then. So without access to French historical analyses, I have been totally dependent on:
1. When Spaniards were the refugees, Jaime Hancock, Sep 2015, El Pais
2. Spanish Civil War fighters look back, Nick Caistor, BBC,
3. Short history of the republican exile: the big exodus of 1939, Lidia Bocanegra in e-xiliad@s, 2009,
4. Refugees and the Spanish Civil War, Larry Hannant, History Today, Jan 2017.

Were the French uniquely unsympathetic to the desperate asylum seekers back in 1939? Of course not. As we know from the Conference on German and Austrian Jewish refugees held in Évian-les-Bains in July 1938, only Argentina, Paraguay, Chile, Bolivia and Cuba responded morally. Britain, France, Belgium, Netherlands, Australia, New Zealand, USA and Canada would not!

Did any Republicans stay in Spain after the Civil War ended? What happened to them?

the population of Spain in 1936 was 32.7 million, but by 1939 it had fallen to 25.6 million. During the three years of the Civil War, huge numbers of soldiers on both sides had been killed in action and there were many other losses due to disease, starvation and people fleeing Spain into exile.

However the massacres of specifically Republican workers, civilians and intellectuals continued, _after_ Franco ended the Civil War. As we noted, nearly half a million fled Spain altogether and 60,000 fought with the French Resistance in WW2.

It was the Republicans who stayed in Spain after 1939 that suffered the worst. They were denied jobs and therefore incomes, babies were taken from Republican mothers and given to Franco-supporters, trade unions and workers' rights were banned, 270,000 were imprisoned and 50,000 executions of the Enemies of the State went ahead without trials. I would not have stayed in Spain :(

Hello Hels, I have always read of the bloody nature of the U.S. Civil War, and of the ruthless goings-on during the aftermath Reconstruction period. However, all this seems relatively civilized compared to later events in Europe. The turning over of Spanish refugees to the Germans seems almost unbelievable--perhaps this was not entirely voluntary on the part of the French. It seems that the more we read about most supposedly civilized countries, the more brutal they show their true colors when push comes to shove.

But civil wars were much worse. The bitterness and the need for revenge was a legacy that was handed down for generations of co-citizens eg civil wars in Spain, USA and Britain, and the Russian and French Revolutions. Decades after Franco’s troops launched a military uprising against the elected Republican government in 1936, there are few Spanish museums dedicated to telling the full story of the civil war. And very few civil war curricula for high school history students.

I have a friend who was a victim of this war and ended up spending her entire early life in Paris before she emigrated to Australia . Her siblings were scattered between Spain and France . her parents suffered greatly due to the trauma of war . Happily they have recovered property in Spain and are now spending time with family they couldn't really see during the Franco era . The whole split in Spanish society must have been very bitter as family members were often on opposing sides. I understand that there is still a great deal of pain , I guess that i the nature of a civil war and why they are particularly awful.

so true :( As late as 2014, in Belfast newspapers reported, the Republican dead were being commemorated at the Catholic cemetery in political speeches by key historical figures, particularly during the numerous festivals ever Easter Sunday. In the last 30 years, funerals were often surrounded by a ring of Royal Ulster Constabulary and Army Riot Squads. The 1988 attack by Protestant Loyalists on Republican mourners was reported in the world's media.

In 2014 they were still citing the armed insurrection in Ireland during Easter Week in April 1916. Divisiveness from the Irish War of Independence (1919–1921) and the Irish Civil War (1922-1923) still embitters the great grandchildren.