Dr George Birkbeck of the Andersonian Institute in Glasgow gave the first lectures in 1800 to local mechanics i.e skilled workers. His subject was new technology. The lectures were so popular that a Mechanics’ Institute was launched to provide adult education for the working classes in Glasgow. And most importantly the facilities were free in an age when learning and libraries were only available to families with money.

The second facility to open was The Edinburgh School of Arts (in 1821) and soon Dr Birkbeck moved south to open the London Mechanics’ Institute (in 1823). The next couple of decades saw the foundation of hundreds of institutes spread across Britain, clearly filling a gaping hole in the education system in the years before compulsory schooling for all children. The typical mid-C19th institute offered courses of lectures (usually on a range of subjects, both vocational and academic), discussion groups and a library.

It did not take long before the rest of the British Empire became entranced with the concepts of adult education and Mechanics’ Institutes. The first in Australia opened in Hobart as early as 1827. It should not surprise us that in Hobart it was a Scottish academic, Dr James Ross from Aberdeen University, who lectured to the ambitious young men on engineering, mechanics and steam engines.

In small Australian cities, adult education was a voluntary self-help association, set up for the workers of a town, assisted by a few lead­ing re­sidents who had money and education. The workers had to raise, by means of small weekly fees, a fund to be expended in the instruction of the members. And the Inst­it­utes could also be funded by local indus­t­rial­ists who would benefit from hav­ing skilled work­ers. Trustees and committee members were dedicated to the improvement of their local communities. Weekly lectures in science and lit­er­­ature was welcomed; subjects like religion and politics were specifically excluded. Victorians took the concept of self improvement very seriously.

As previous posts have shown, the the Mechanics’ Institute concept was working well across Britain and its Empire, particularly between 1850-1914.

If I had thought about adult education in C19th USA, I would have guessed it would have been very similar to the Scottish model. Or perhaps the lyceum movement which, in Pre-Civil War America, paid important people to give speeches on religious, political and scientific topics to gatherings in small or rural towns.

Then Parn­assus recommended that I consider the Chautauqua Movement, named after the Chautauqua Lake in S.W New York. This area was the setting for the first educational ass­embly for adults and so became the role model for Americans. 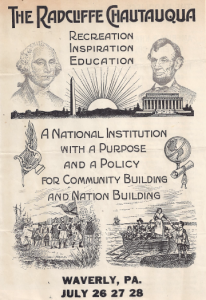 Social changes occurring after the American Civil War (1861–65) included the em­erging democratisation of education. In Aug 1874, Rev John Heyl Vincent and Ohio businessman Lewis Miller rented a Methodist camp meeting site to use as a summer school for Sunday school teachers. Perhaps, as the movement’s own history suggests, this promoted a nation-wide interest in the professionalis­ation of teaching. Methodist yes, but Vincent and Miller focused on the educational, rather than revivalist. The underpinning of the Chautauqua Movement was seen as the sort of mild Protestantism that informed much of American culture.

At first Miller financed and organised a two-week summer training course for Sunday school teachers in all Protestant denominations. Rev Vincent was named superintendent of instruction and was responsible for overseeing the curriculum and organising faculty. It worked! At the first summer in 1874, 142 Methodist Sunday school teachers from 25 states and four countries attended the assembly.

Then 4-week sessions were staged each summer. They were utilising “the general demand for summer rest by uniting daily study with healthful recreation, and thus rendering the occasion one of pleasure and instruction combined”.

Within a few years, the scope of the Chautauqua Institution had broadened to include adult education to the general public. Along with the educ­ational courses (including the arts and public affairs), thousands of summer residents attended concerts and social activities. The range of serious subjects grew. Hebrew and Greek were added in 1875, English literature in 1876, French and German in 1878.

By the late C19th, Chautauqua was nationally known as a centre for educational activities that aim­ed at intellectual & moral self-improvement and civic involvement. Victorian values were clearly applicable on both sides of The Pond. The programme had provided learning opportunities for those who, because of age or life situation, could never have attended institutes of higher learning.

The Chautauqua idea of adult education spread to many towns, especially in rural areas where opportunities for secondary education had been limited. The new chautauquas introduced people to the new issues of public concern, science, culture and philosophy across half the country by 1900. Especially in the Midwest where tent cities popped up every summer! By the peak of the Chautauqua Movement in 1915, some 12,000 communities had hosted a chautauqua. People flocked, whether they were watching Shakespeare or vaudeville acts.

The Chautauqua Movement brought learning, culture and finally entertainment to the small towns of America during the late 19th and into the inter-war era. Lifelong learning was seen to be one of the keys to living a happy, fulfilling life.

Yet the movement largely faded by the mid-1930s. The Depression had destroyed the ability of many rural families to even think about summer holidays. And for those families with a bit of mon­ey, perhaps the family radio and the local cinema were more app­eal­ing. 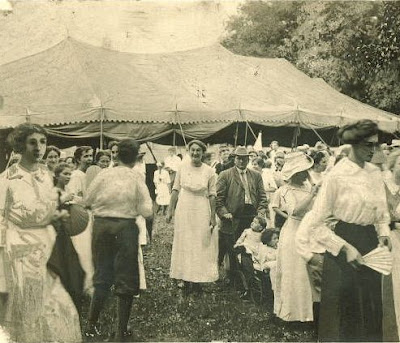 But there was another factor after WW1 that I, an Australian, would not have known about. There was a sharp increase in fundamental­ism and evangelical Christianity in during the inter-war years; the bland Protestantism exhibited at most chautauquas could not accommodate the urge for evangelical passion. The few surviving Chautauqua gatherings survived because they combined the fun of a county fair with the religious passion of a revival meeting.

The Chautauqua Trail takes interested readers from Halifax in Nova Scotia to Boulder in Colorado.

I don't mind bland religion. I remember the conflict between Protestants and Catholics in Australia, and I was ignorant child who may well have gone along with it at school, but the antipathy seemed to die overnight, but what year?

Hello Hels, It is interesting to try to sort out the educational and entertainment components of the Chautauquas. In the Chautauquas' decline, records, radio, movies and later television took over as forms of entertainment--moreover, these were all available more or less on demand, as opposed to the rare entertainment opportunities of the Lyceum-Chautauqua era. But still, even the more modern media partly worked on the principle of education--records, radio, etc. were all considered as powerful forces for a modern type of education. Even the internet seems divided between entertainment and education; I was recently watching some Youtube videos on physics, and was surprised how high the view counts were, even for fairly technical subjects.
--Jim
p.s. The original Lake Chautauqua provided/provides the additional benefit of great fishing!

Most people love to learn. Now that I am fully retired I have been looking around. As an Open University alumni I get emails about their courses and this post has reminded me that I want to seek out our local University of The Third Age (U3A); I believe you also have that in Melbourne. The Workers Educational Association (WEA) is still strong here as well.
I had not previously heard of Chautauqua so thanks once again for a great post!
CLICK HERE for Bazza’s 'educational' Blog ‘To Discover Ice’!

I don't mind mild religion either, because it gives the members all the warmth of a community, ceremonies and holidays. And without the conflicts and pain of there only being One True Religion, we don't have to consider everybody else as infidels.

I am a bit of a technophobe but records, radio, TV and films were brilliant for two different reasons. Firstly, as you noted, modern media could indeed provide a modern type of education that wouldn't have been invented or as wide spread amongst ordinary families earlier. Secondly working and farming families didn't seem to be having much fun in their normal daily lives, so healthy recreation, music and any other summer entertainment would have been essential at Chautauquas.

The WEA was founded in the UK in 1903, as provider of adult education to working families. It started up in Australia just before WW1 and was going very well indeed, but it changed or faded in the later 20th century.

U3A has been an excellent innovation here, particularly for people post-retirement but before dementia sets in. It began in Melbourne in 1984, soon spread to other states, and is still staying true to its educational, intellectual goals.

Where did the students sleep? The only mention I found was in Boulder and it wasn't a tent. Gwenthean Cottage, a model vacation home, was built in 1899. A personal tour through the cottage by owner revealed an interior little changed from the turn of the century. A small door was built to pass food from the kitchen to the porch and a there is a chain to pull for flushing the toilet.

Isabella Alden wrote: In the early days of Chautauqua, there were no hotels or boarding houses where visitors could stay. Instead, visitors rented tents or small cottages erected on the grounds. Some cottagers with room to spare rented out rooms to paying guests. If you were not lucky enough to have a kitchen of your own in which to prepare your meals, you had to eat in the dining-hall, which was a long, open-air building furnished with rough, unpainted tables and benches.

Soon the meal restrictions were removed and anyone could provide rooms and meals for a fee, as long as a specified percentage of the amount charged was given to the Institution. Within a year, boarding houses had sprung up as if by magic, while a vast number of individual cottages sported signs offering “Rooms and Board.”